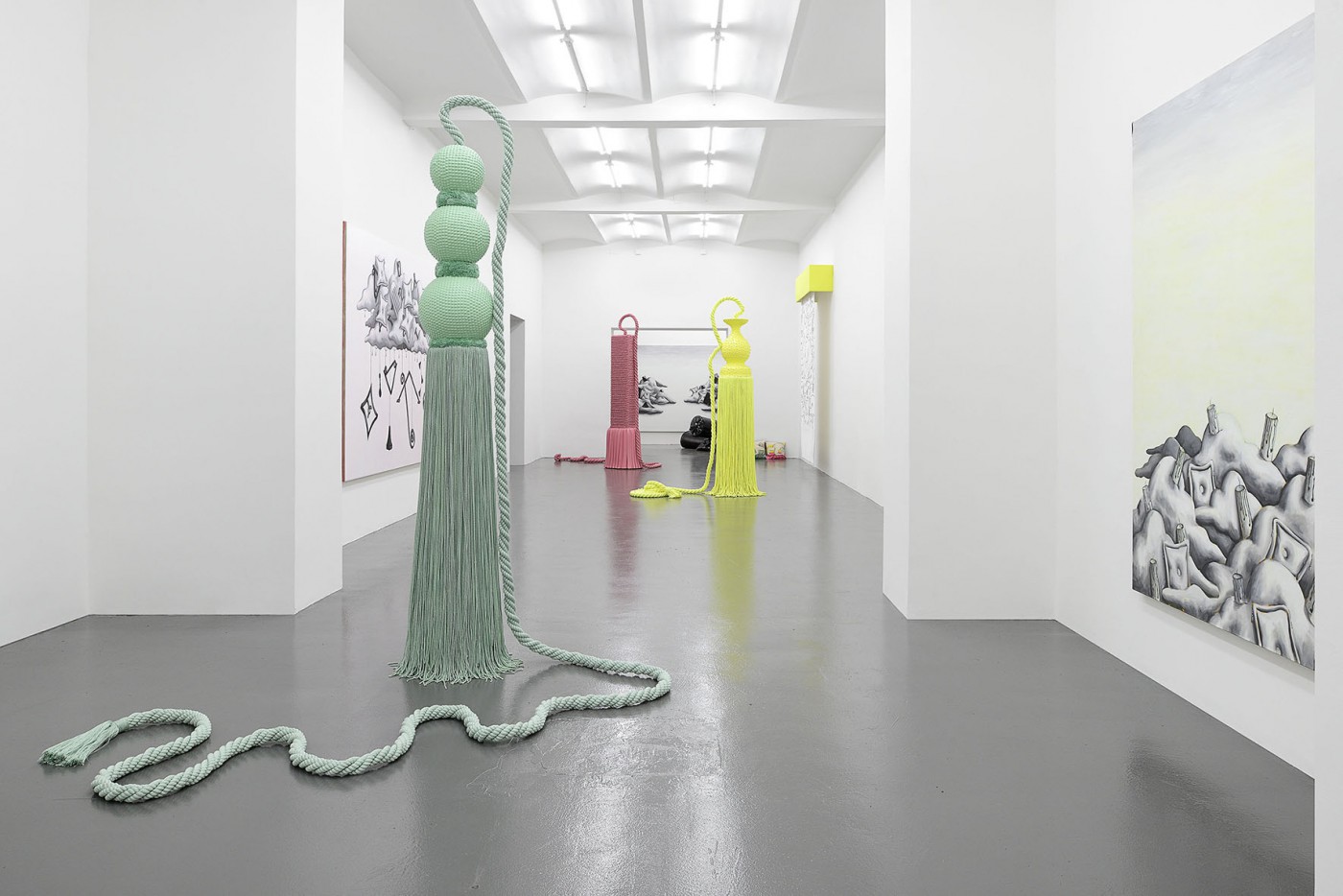 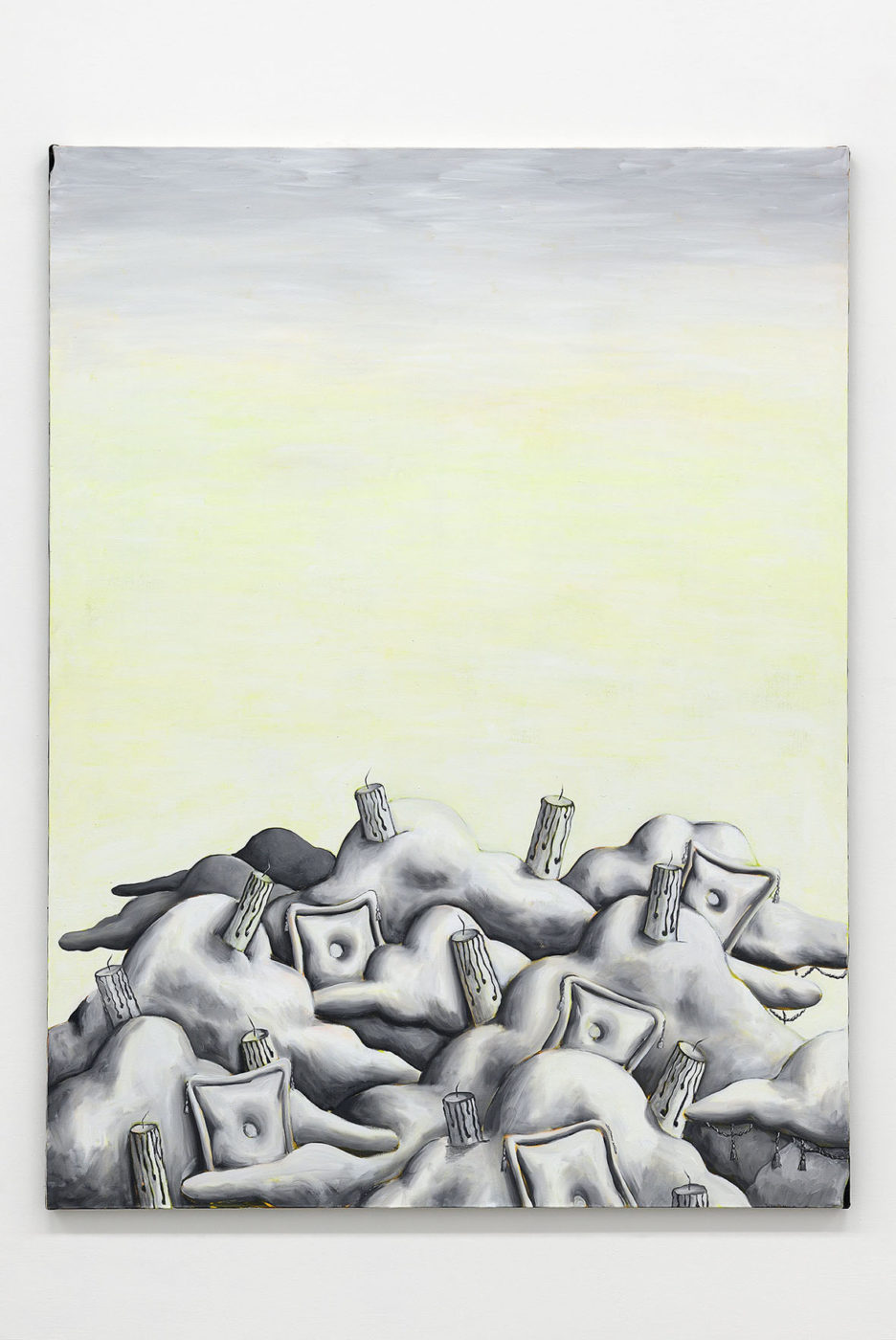 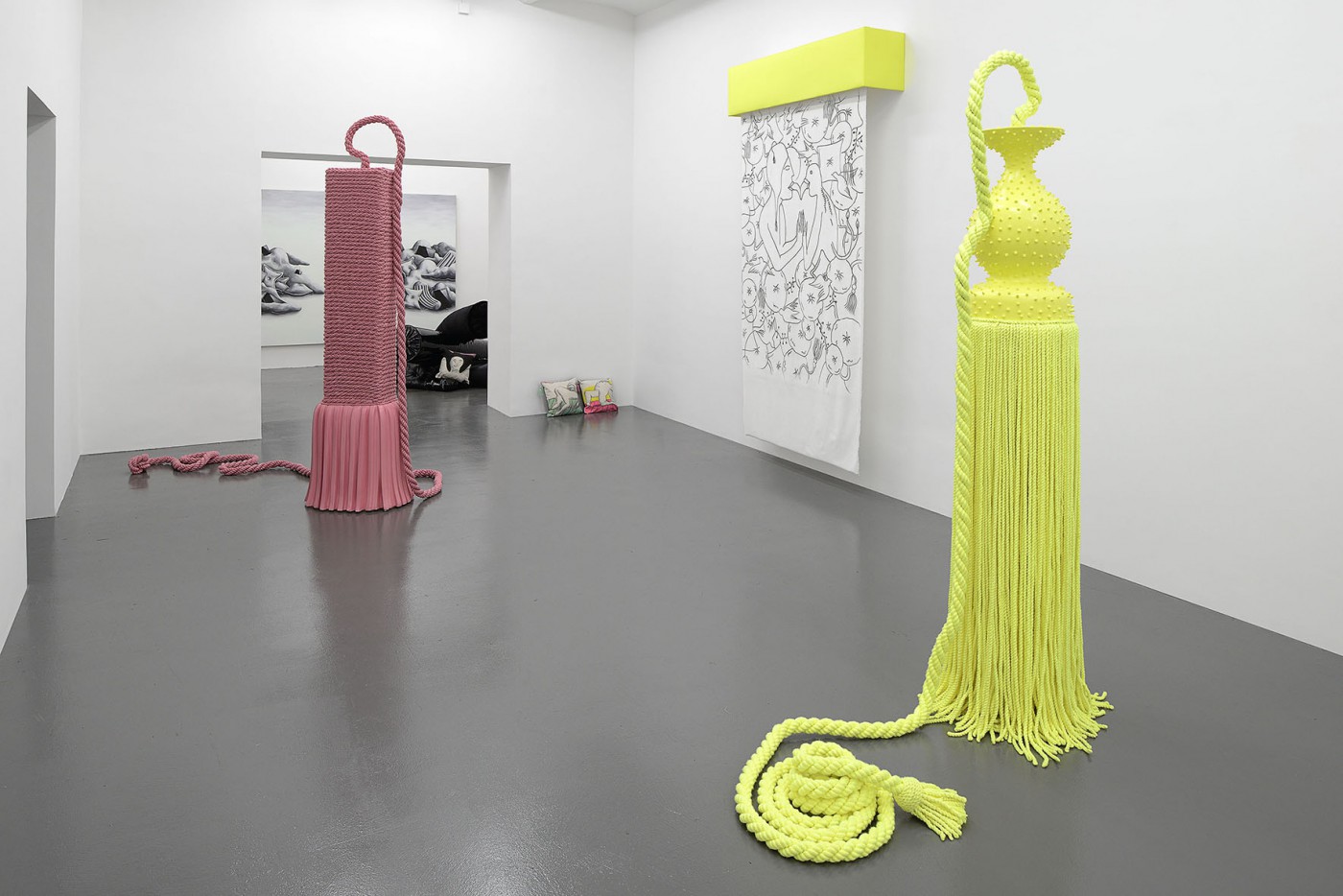 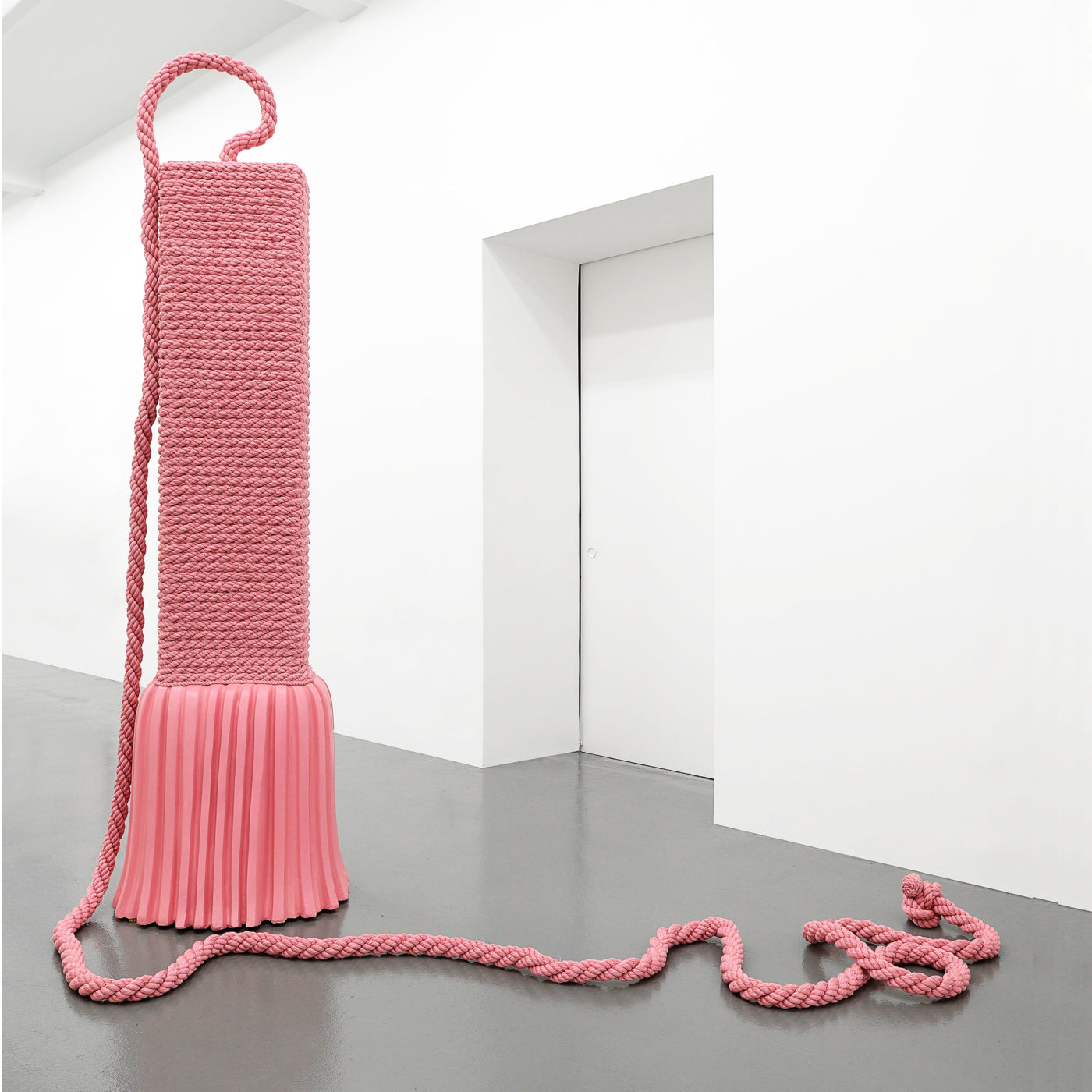 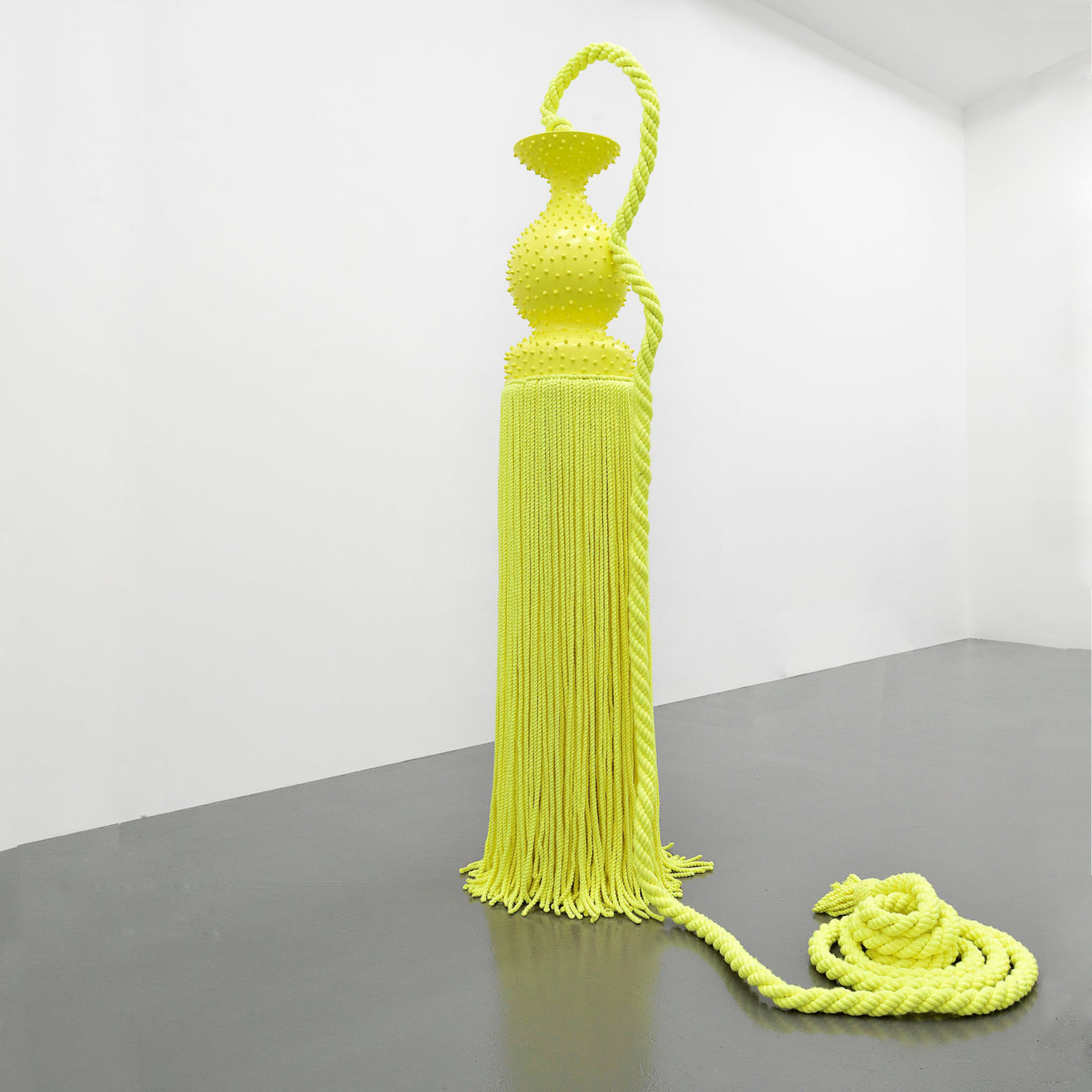 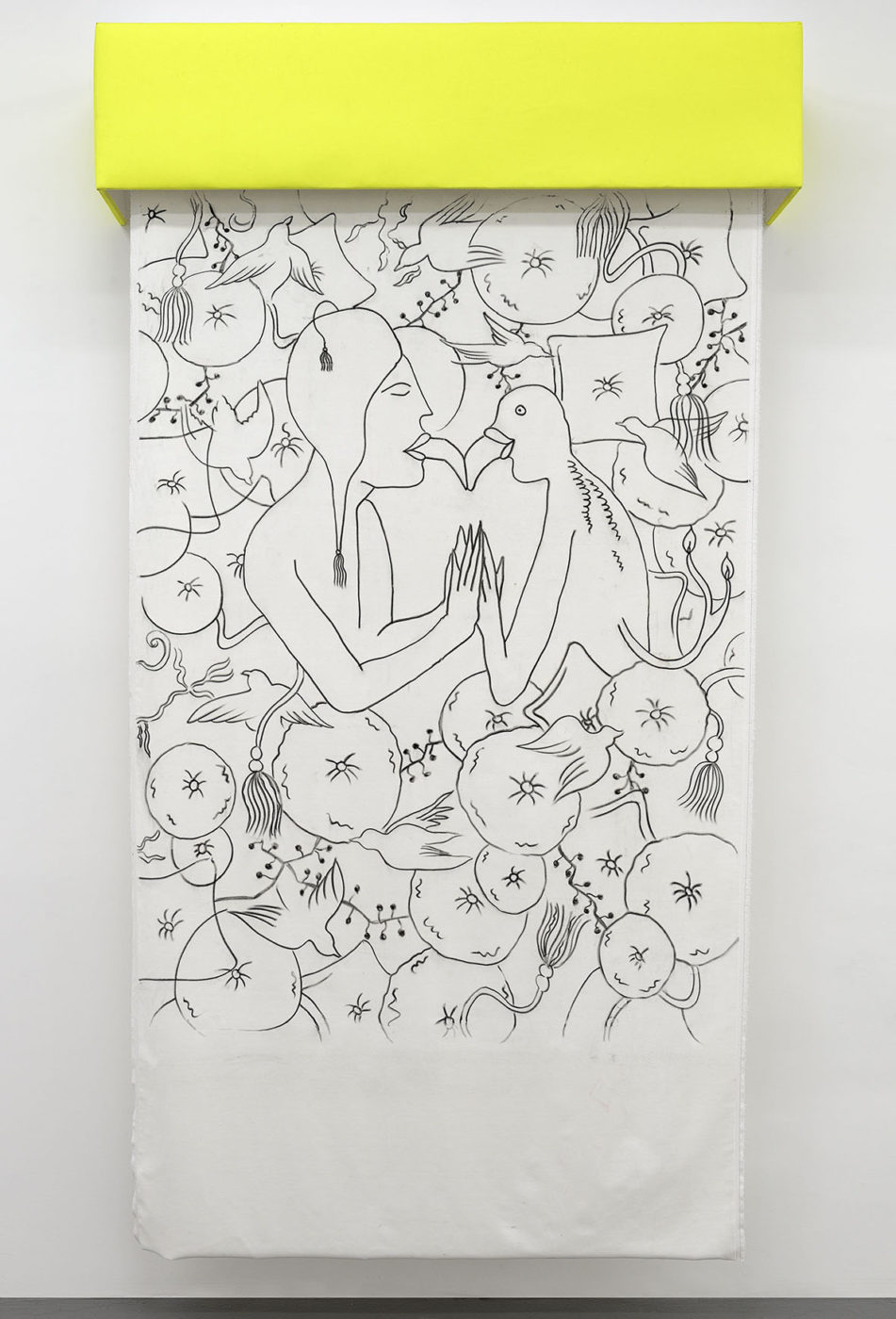 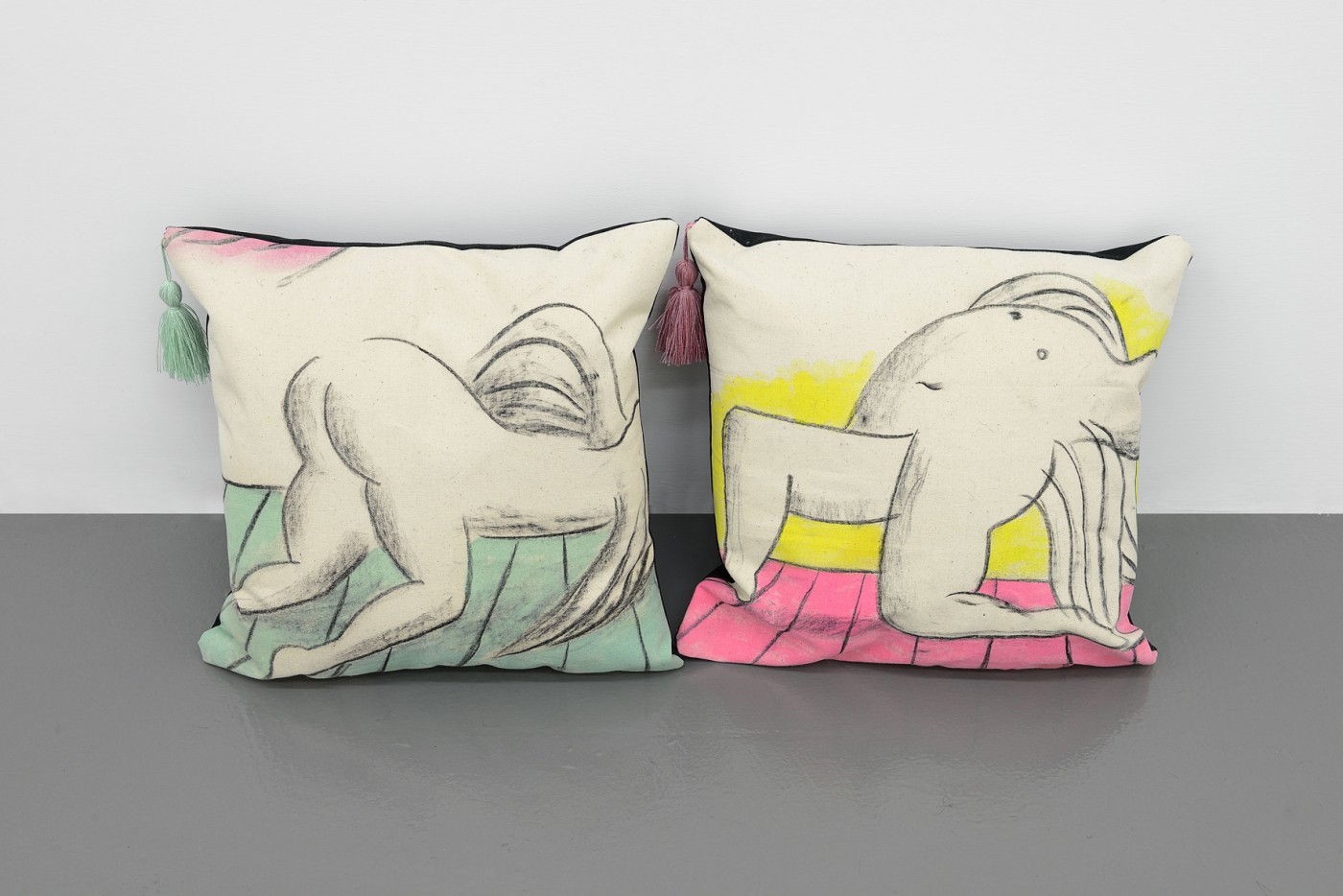 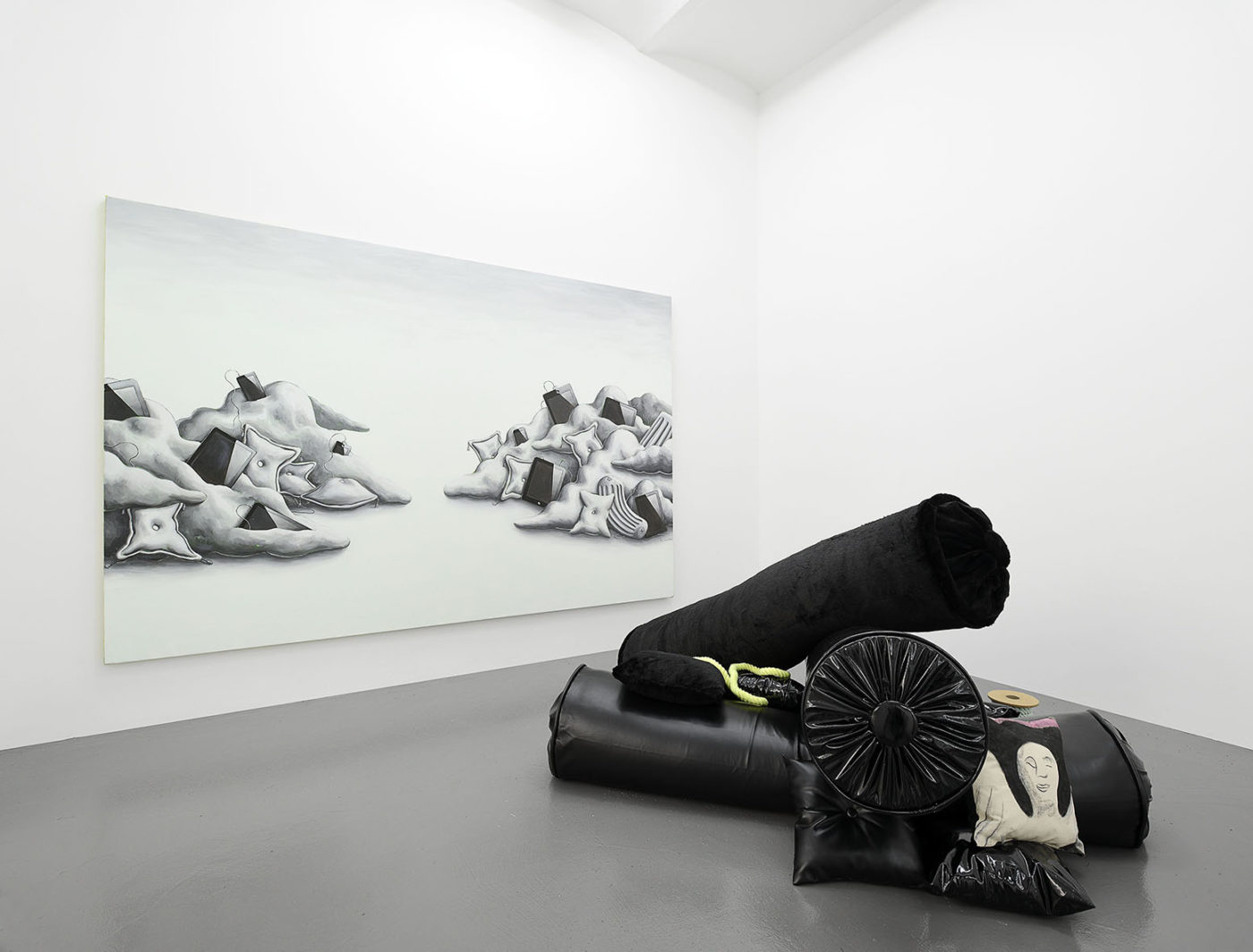 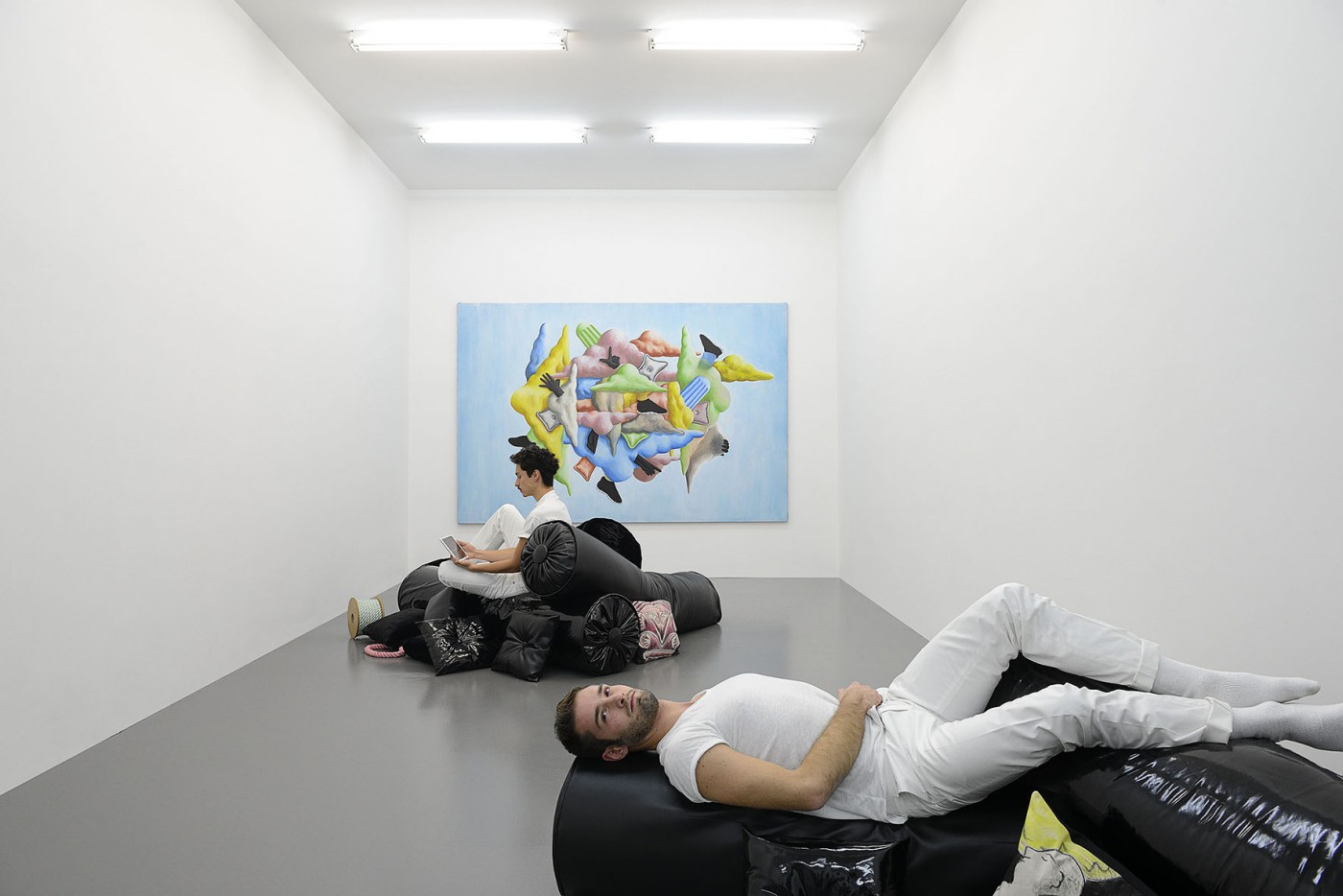 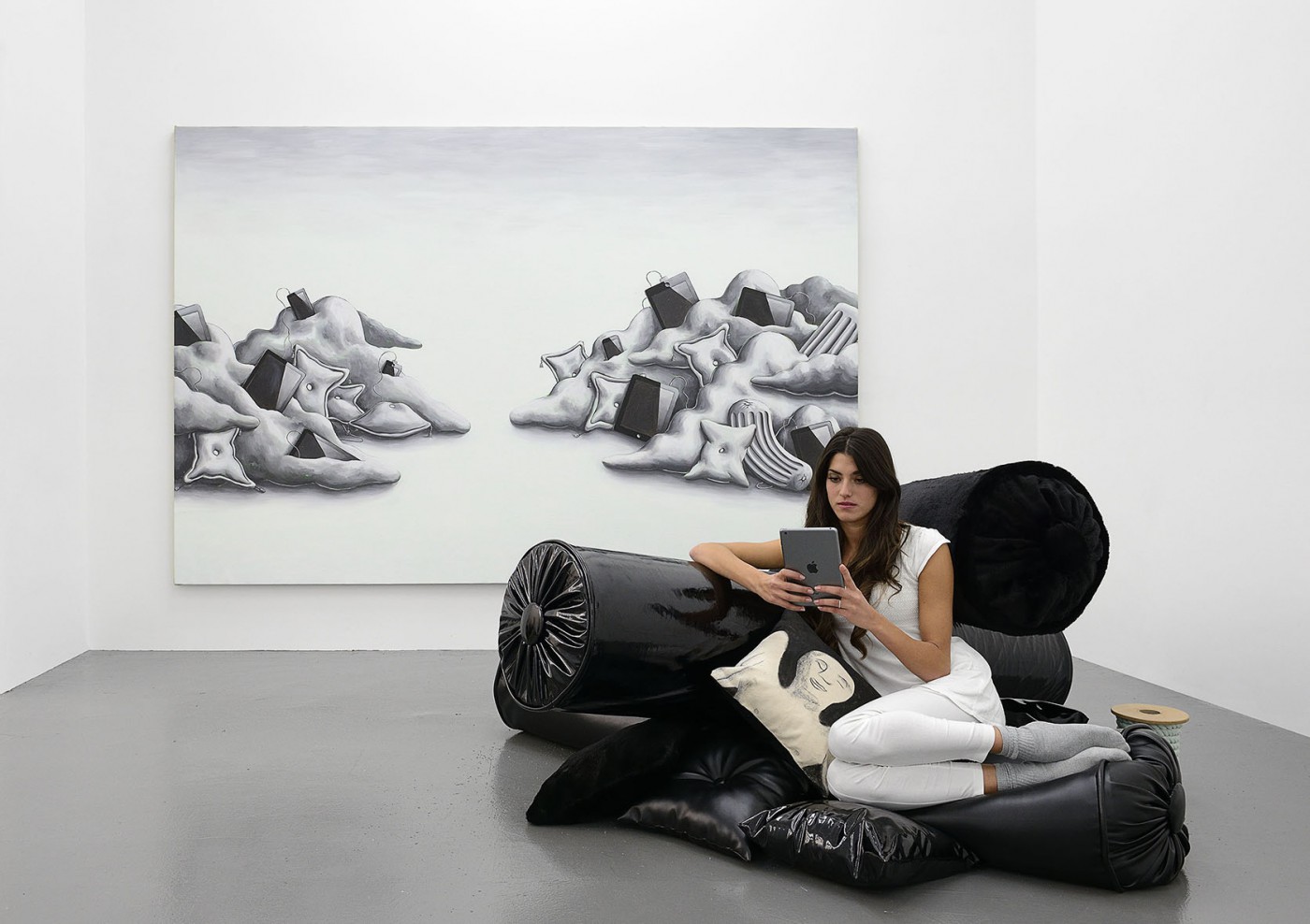 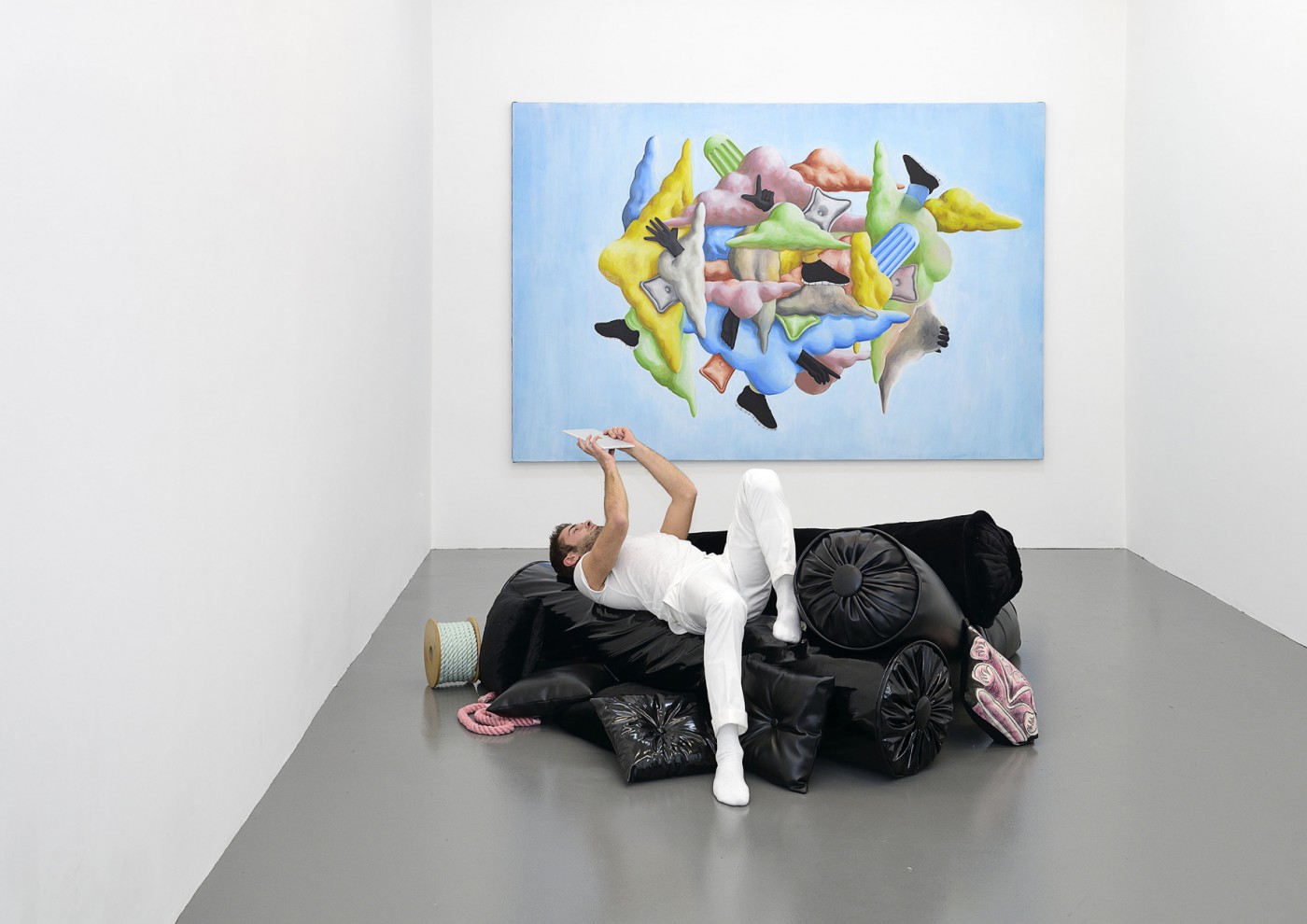 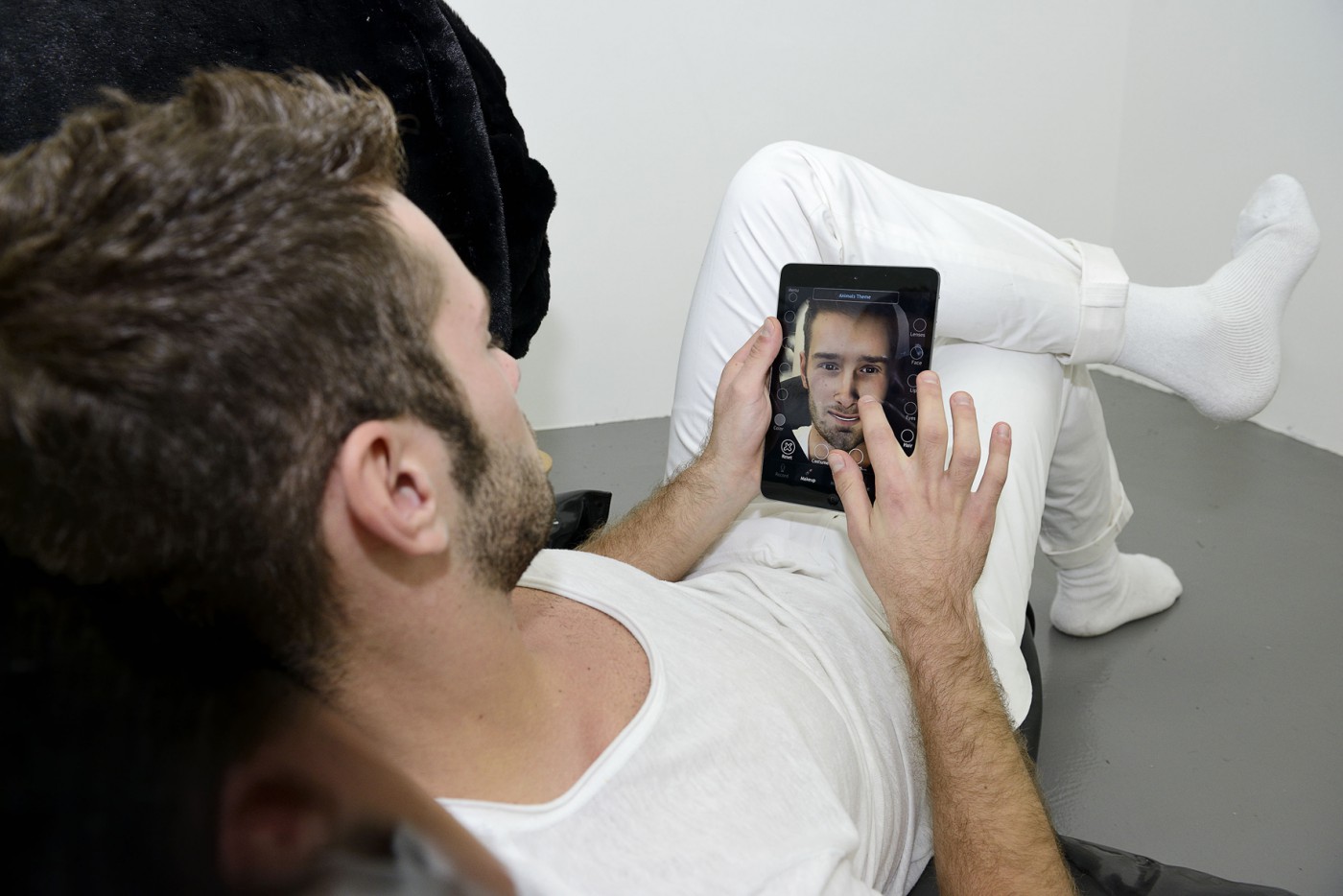 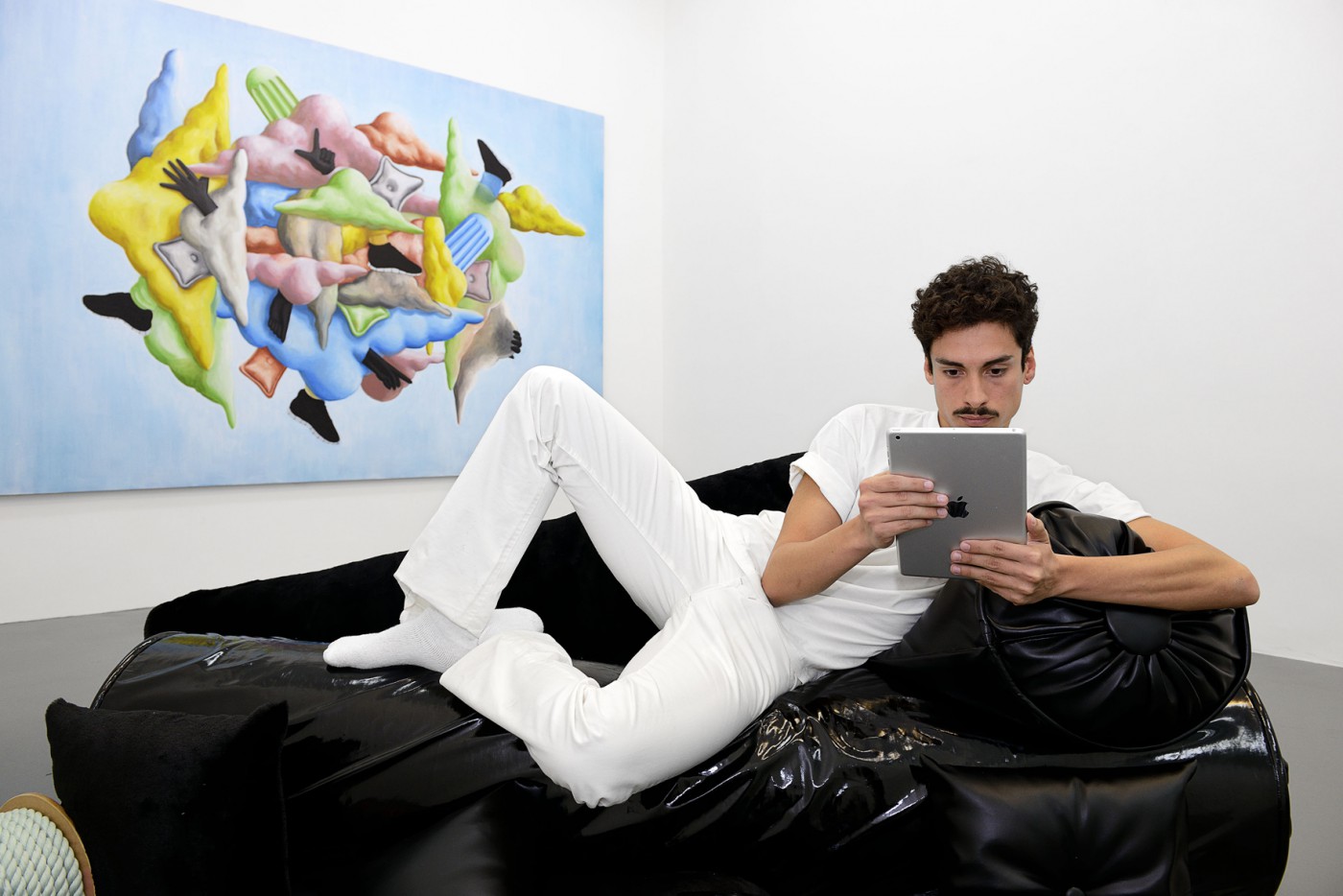 T293 gallery is pleased to announce the third solo show at the gallery of the Italian, London-based artist Patrizio Di Massimo. Titled Are Ere Ire, the project presents a new body of sculptures, paintings, installations and performances. The works composing the exhibition intertwine polyphonic leitmotifs of Di Massimo practice, such as clouds, tassels and cushions alongside representative models of iron objects, real and fictional tablets, curtains and whimsical drawings. The whole show is simultaneously actor and spectator of itself, and within it the work, the performer and the viewer play flexible and interchangeable roles.

[…] Not so long ago, we could stand before the altars without any limitation of time, in the full quietness of the area lit by the lamps. We used to walk in by the main door of the temple with curious interest, the sun shifted itself by flooding the clouds aside, unveiling and hiding them suddenly. Then we lingered in the shadow, enchanted by the effects that the movement of light was creating in its dialogue with shapes and colours. […]

Nevertheless, such patterns of conjugation refer respectively to other three subjects around which the exhibition unfolds itself. ‘Are’ are the religious or mythical altars before which we bow in order to pray or to meditate; ‘Ere’ are metaphors of time, the only real component of the matter we all are made of; lastly, ‘Ire’ are mythological figures inhabiting both the space of representation and that of our own imagination.

[…] The white of the sky was winding and permeating everything, acting as a background for the symphony of textures and textiles, antiquities and brand new objects. Those were fairy pillows, frozen tassels and rubbery curtains. All around the lights, images followed one another at alternate heights, becoming harbingers of a seemingly simple meaning,  yet of a strict and complex code. […]

Are, Ere, Ire links domestic objects bidimensionlly represented through paintings and drawings with the same objects assembled as sculptures or installations. There is no real hierarchy between these two sections, and it is not clear whether one is the reflection of the other, or its recognition. Rather, all these objects coexist, and also extert an endless process of mutual acceptance. This is what happens to the pillows pictured among the clouds in the big, four paintings on the wall (Ara Ara Ara, Stream of Thoughts, Mindfulness of Emotions, and Cosmic Joke) in relation to the sculptural pillows invading the gallery floor and made of faux fur,  fake leather and PVC. The same process is embodied by the performers who lay among these pillows while playing with their own image as digital avatars recreated by the application Morfo on Apple devices. Furthermore, we as men and women visiting the exhibition are also accompanied by so many humanoids resembling giant, colourful tassels of which we are only duplicates.

[…] Past and future ages were depicted in them, the fierce furies, the mythological and scary moirai. And standing there in front of the altars we could sacrifice thoughts and emotions. We bowed solemnly in search of concentration and our breathing articulated an inner mantra made up by a continuous focus. All around there was the real, and at the same time, a projection of an intimate adventure yet to be undertaken.  […]

Indeed, these tassels are: Are, colour mint or sea water, fragile and snob, with a long cut skirt, and spherical head and chest; the pink Ere, made of an 80 metres long rope that twistes itslef to the extent of reaching a skirt made by using CNC technology techniques, and lacquered in the same colour; the fluorescent yellow Ire, connecting its vessel shaped top with a texture resembling the patterns of a ostrich skin, as well as with a bottom made of bullion skirts.

[…] Cleaning the horizon, taking the gaze away, removing stratifications.  […]