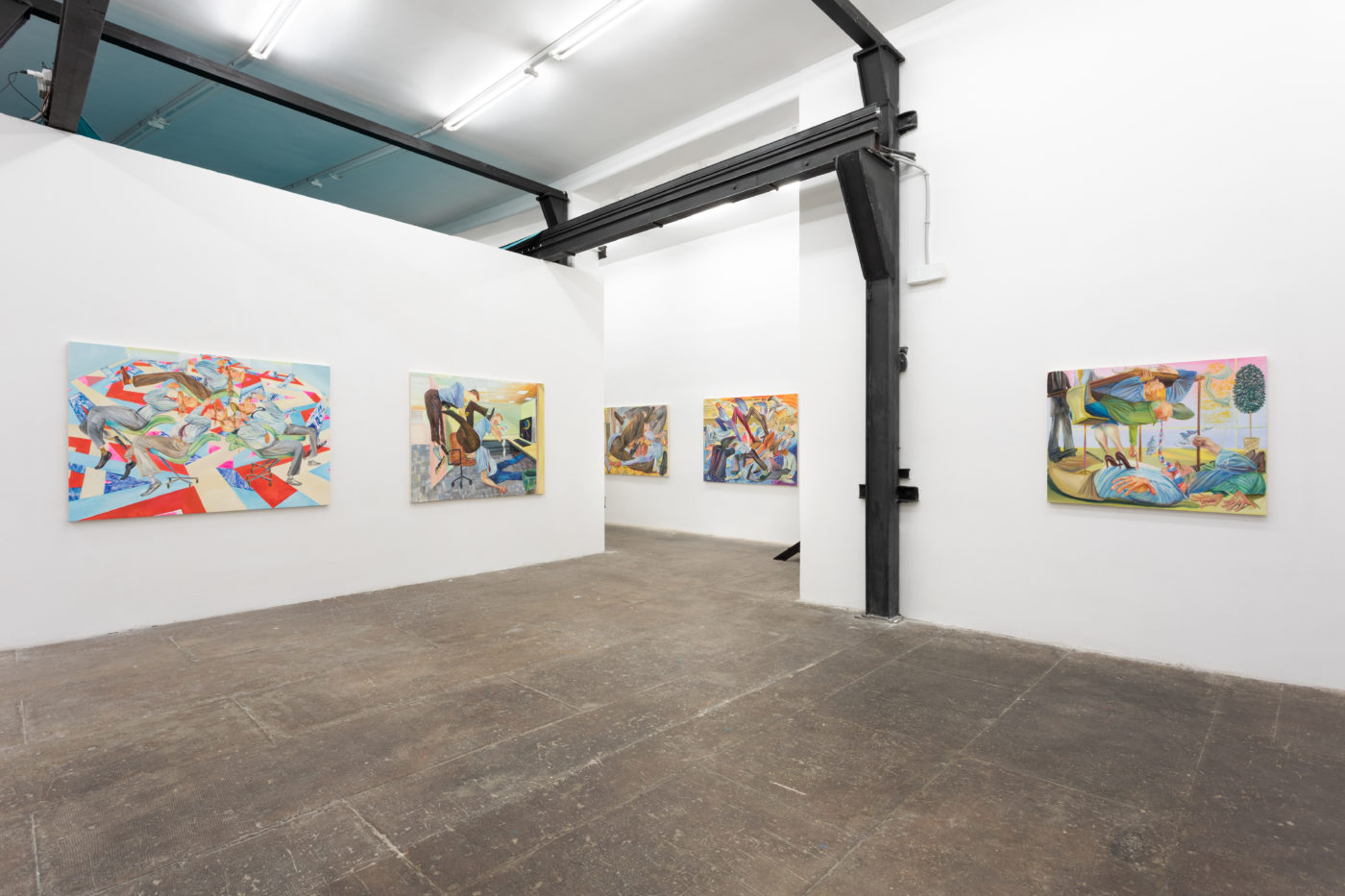 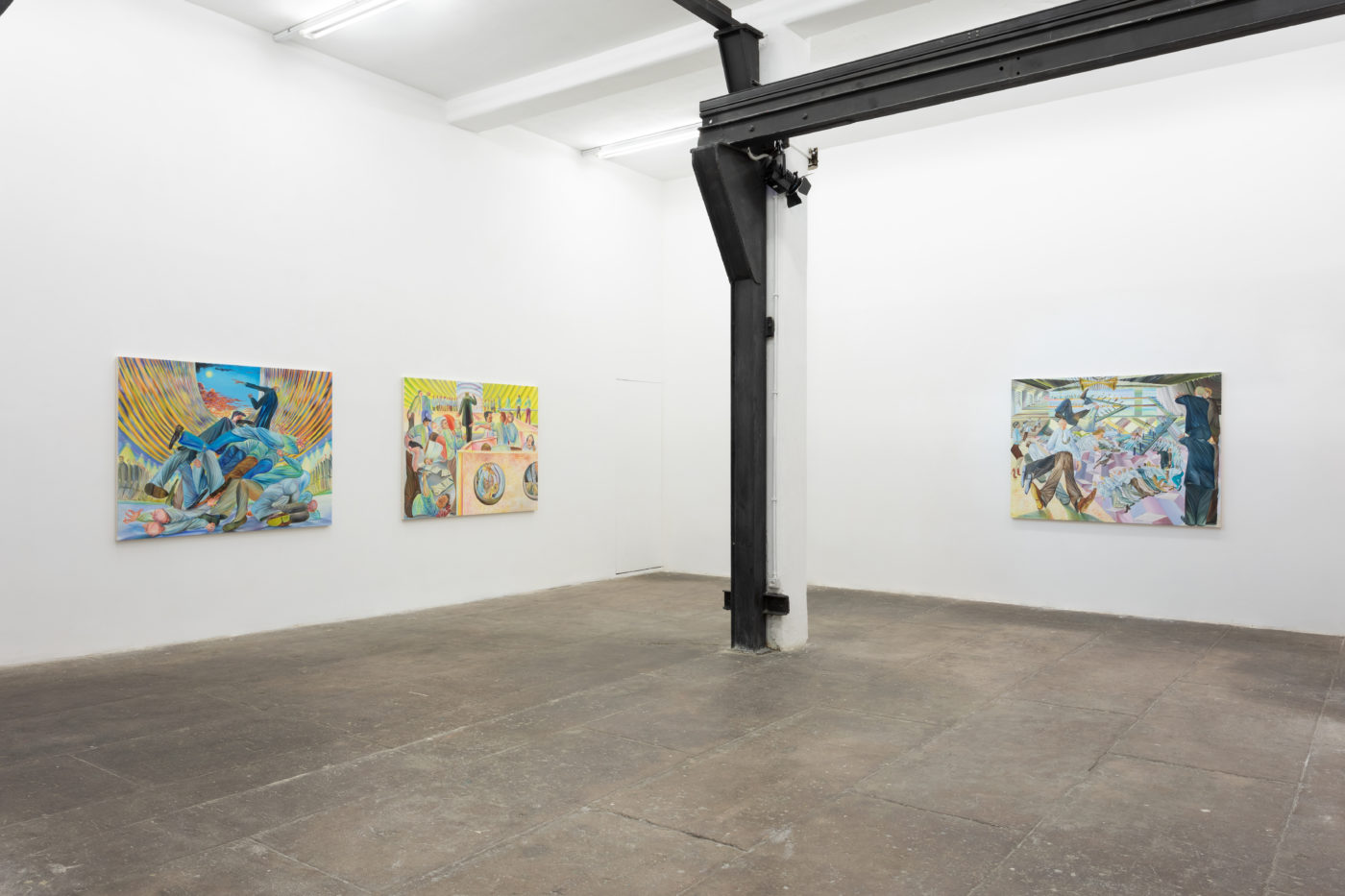 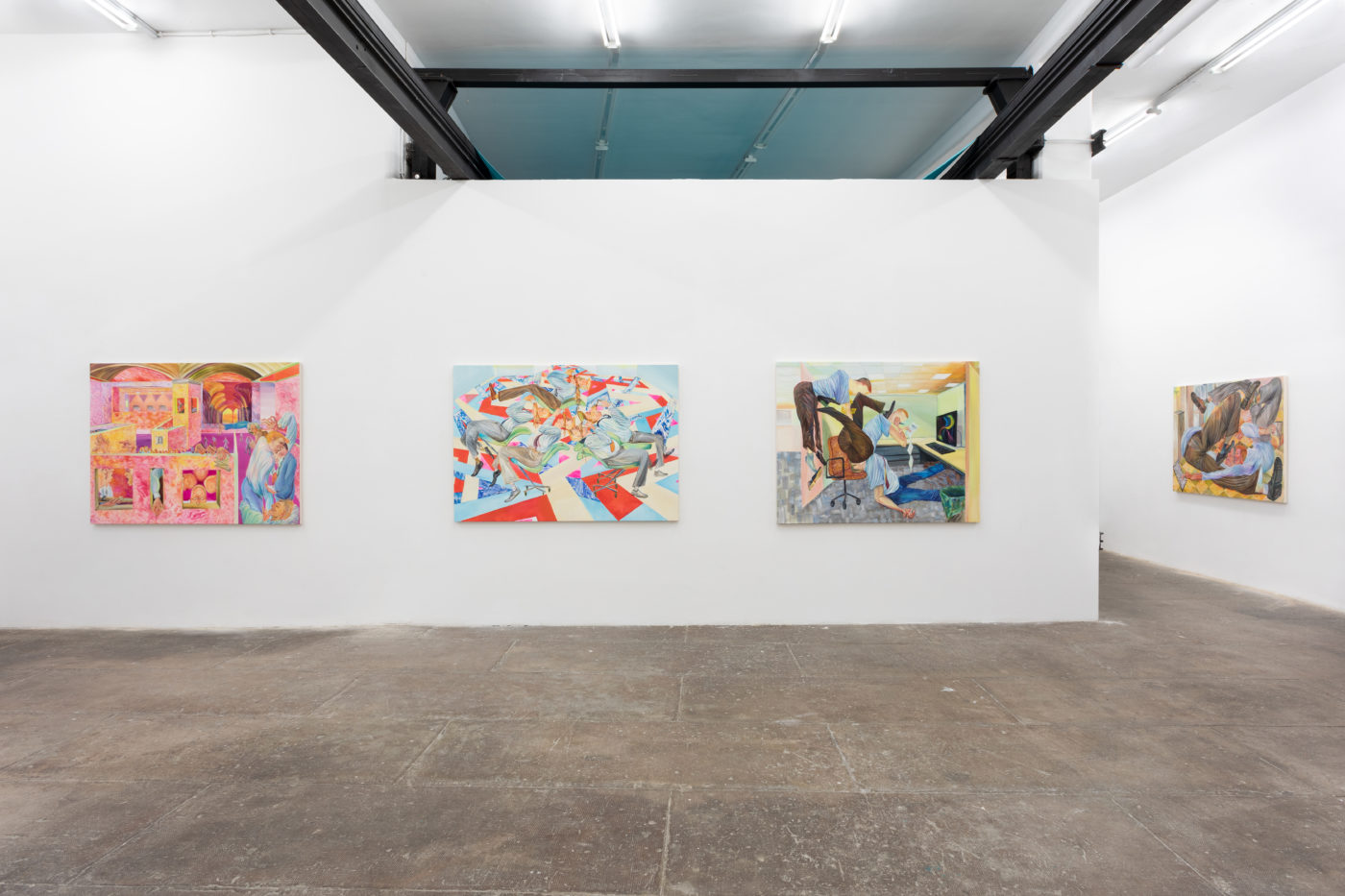 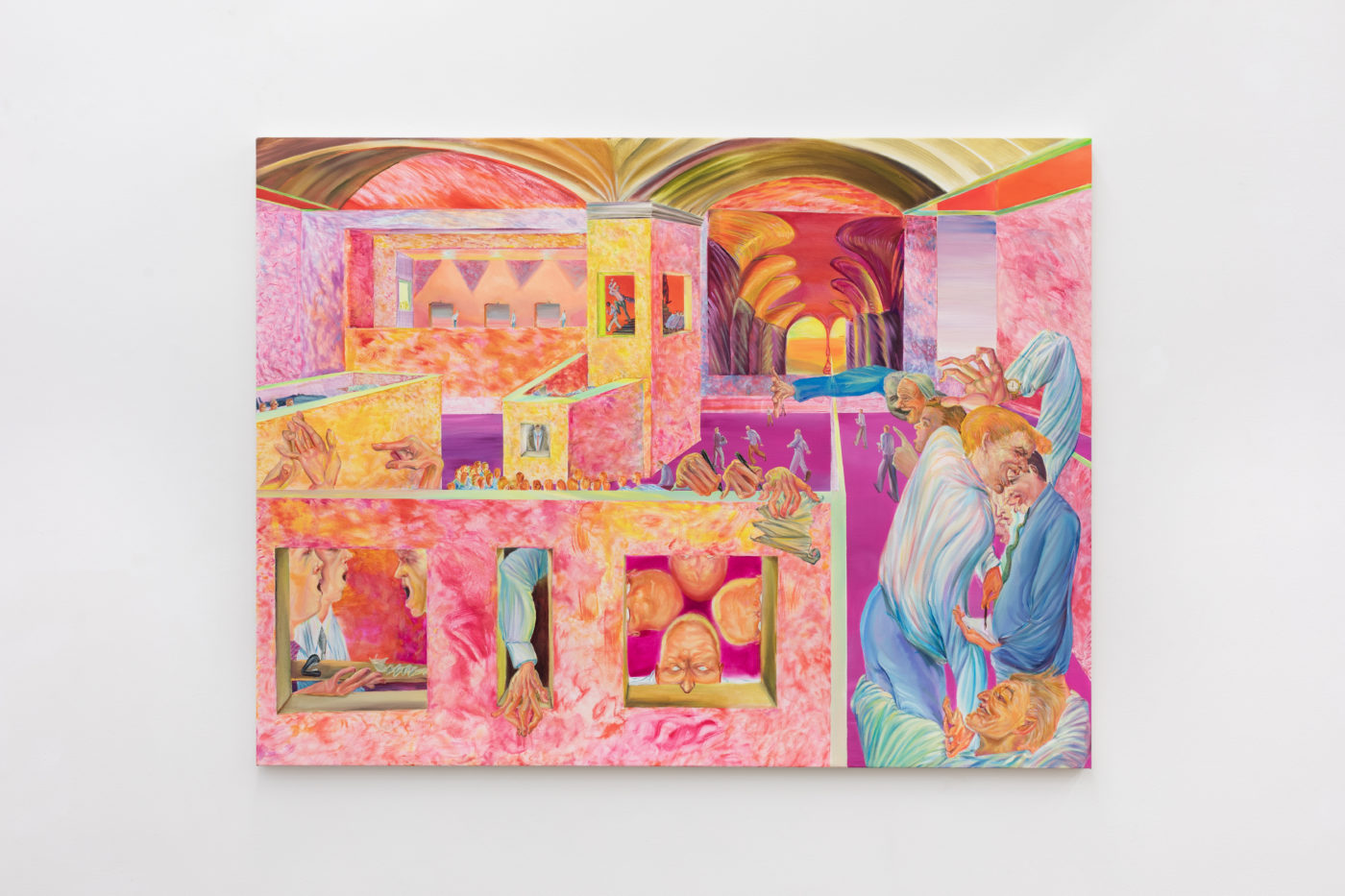 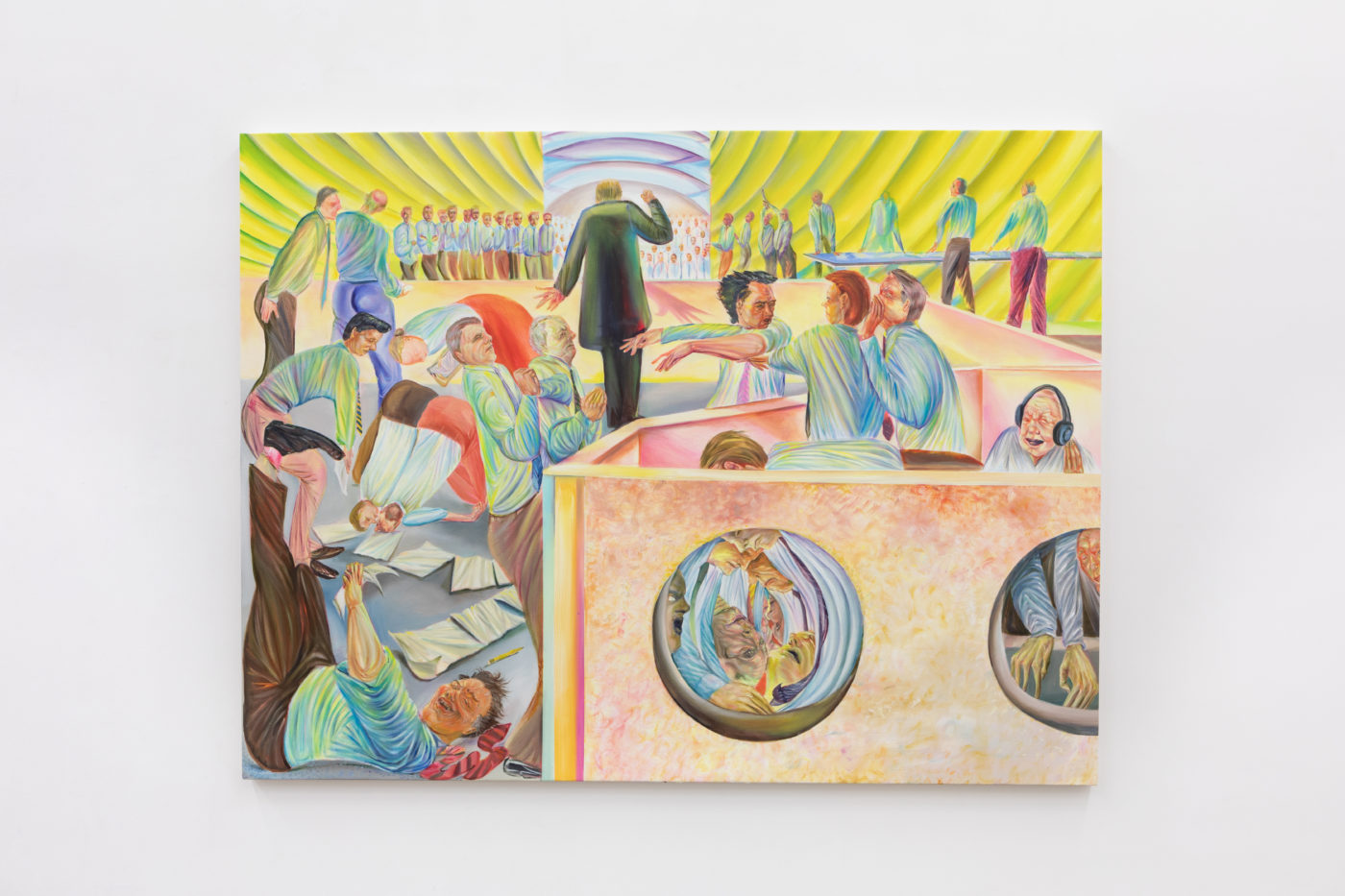 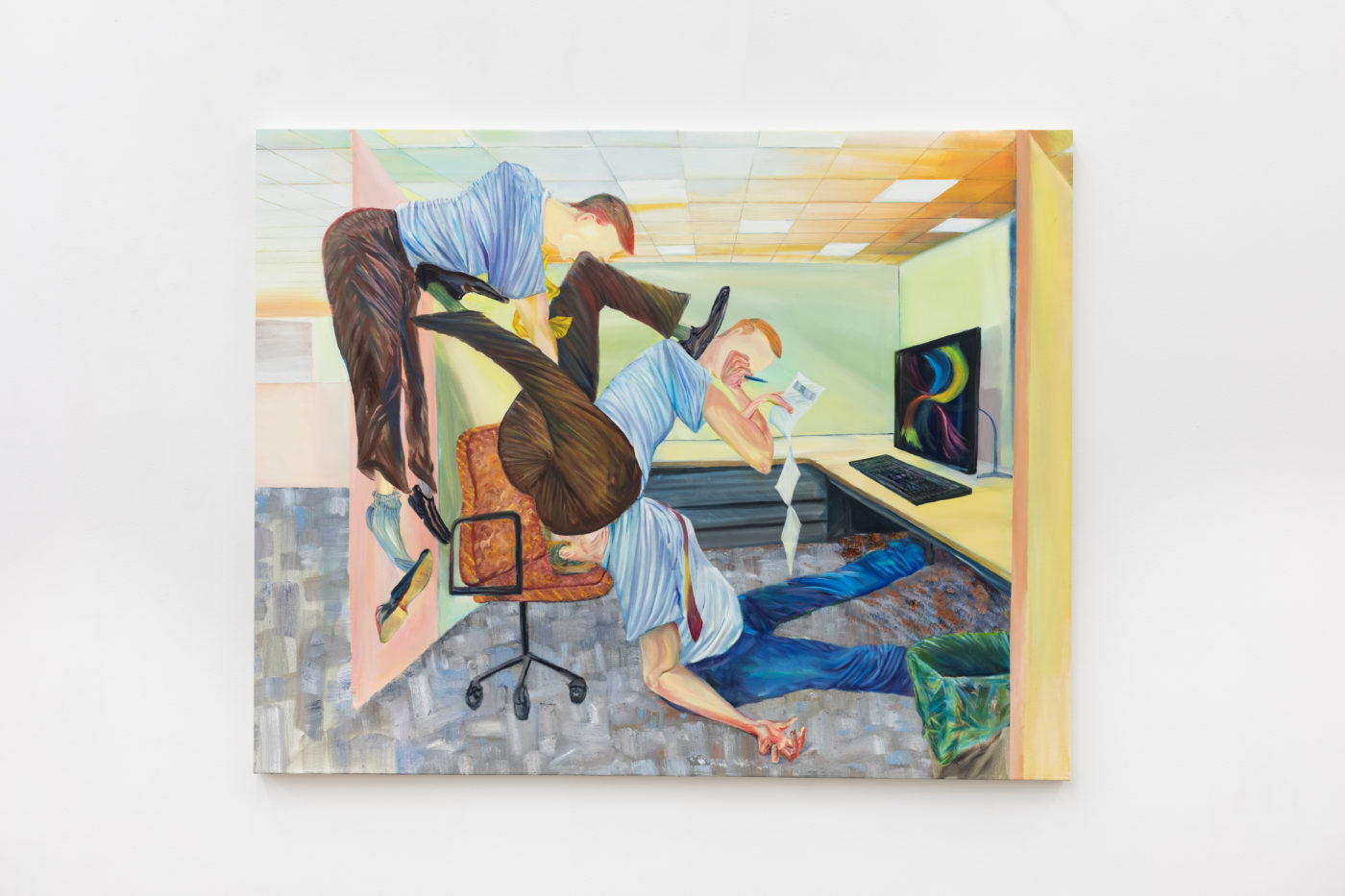 For the show, the New York-based artist presents a new series of oil paintings, in which he depicts a hyperactive work environment of figures competing in an ambiguous institution. With influences ranging from the 20th Century New Objectivity movement to Neo-Futurist architecture, Palmer defies the viewer’s mind by creating manipulated, chaotic surroundings, often using dichotomies to compose the paintings, such as function versus dysfunction, conforming versus disputing, human versus object, or liberty versus constraint.

Considering the functional purpose of workspaces as grounds for invention and disorientation, the artist then proceeds with its dismantle. In each work in the series, many of the figures are uniform in clothing, wearing white tucked in shirts with ties. It’s an incomplete suit that suggests unideal fashion, yet acceptable work attire. These groups of figures are often conspiring and competitively climbing on top of each other in their mysterious jobs. The objects of the paintings are in many ways gentrified wannabes, social climbers, and yuppies. With painterly invention, Palmer transforms these subjects into silly figures, depicting their ideals as nonsensical achievements.

When designer Robert Propst released the first cubicle in 1967 under the name “Action Office”, it quickly became the individual’s own personal, private 6-foot square area of productivity. The cubicle’s isolating quality lends itself not just to office spaces, but also artist studios. As bohemian as one would hope the experience of creating artwork to be, it is a bit of a stark contrast for the studio to be contained in the cubicle. The artist sees the cubicle as a boxed-in human surrogate considering it a first approach into viewing the architectural interior of each piece not just as a structure, but as an ecosystem of barriers and aesthetics available for invention.

The piece All Over the Note Taking Racetrack is composed of two workers conspiring around a notebook filled with scribbles and fingerprints. One figure has a joyful, masklike melting quality to his face and the other exhibits a boy-like brattishness, reminiscent of a Norman Rockwell character.

The piece entitled Tinkering Tantrum Report deals with a nefarious power dynamic between workers. Active Stance depicts a form of movement that desired frantic productivity yet suggested its opposite. The figures seem to be regressing from their professional setting into a mixture of infantile sucking motions and languid hanging positions while the image takes place in a traditional cubicle setting. In the largest work in the exhibition, Property Branch Division Center, the institutional setting is more vast, open, and yet less comprehensible. The various floors and hierarchal steps multiply into a horizonless landscape of business place. The perspective is impossible. The space itself is an over-construction with a surplus of workers flooding it.

While creating this imagery, the artist takes on the role of an unreliable narrator. Using painting, the medium that has been the traditional depicter of both the natural world and actual histories, he creates a variation of discordant pictorial languages echoing the manipulation of reality experienced through elements such as romanticized advertisements and misleading propaganda. Every painting is a suggested universe of logic that the viewer can either believe or disbelieve. Inherent infrastructures have the ability to crumble, and Chase Palmer’s images always threaten their breaking point: each image is the artist’s own way to protest against a preconceived manner of thinking.