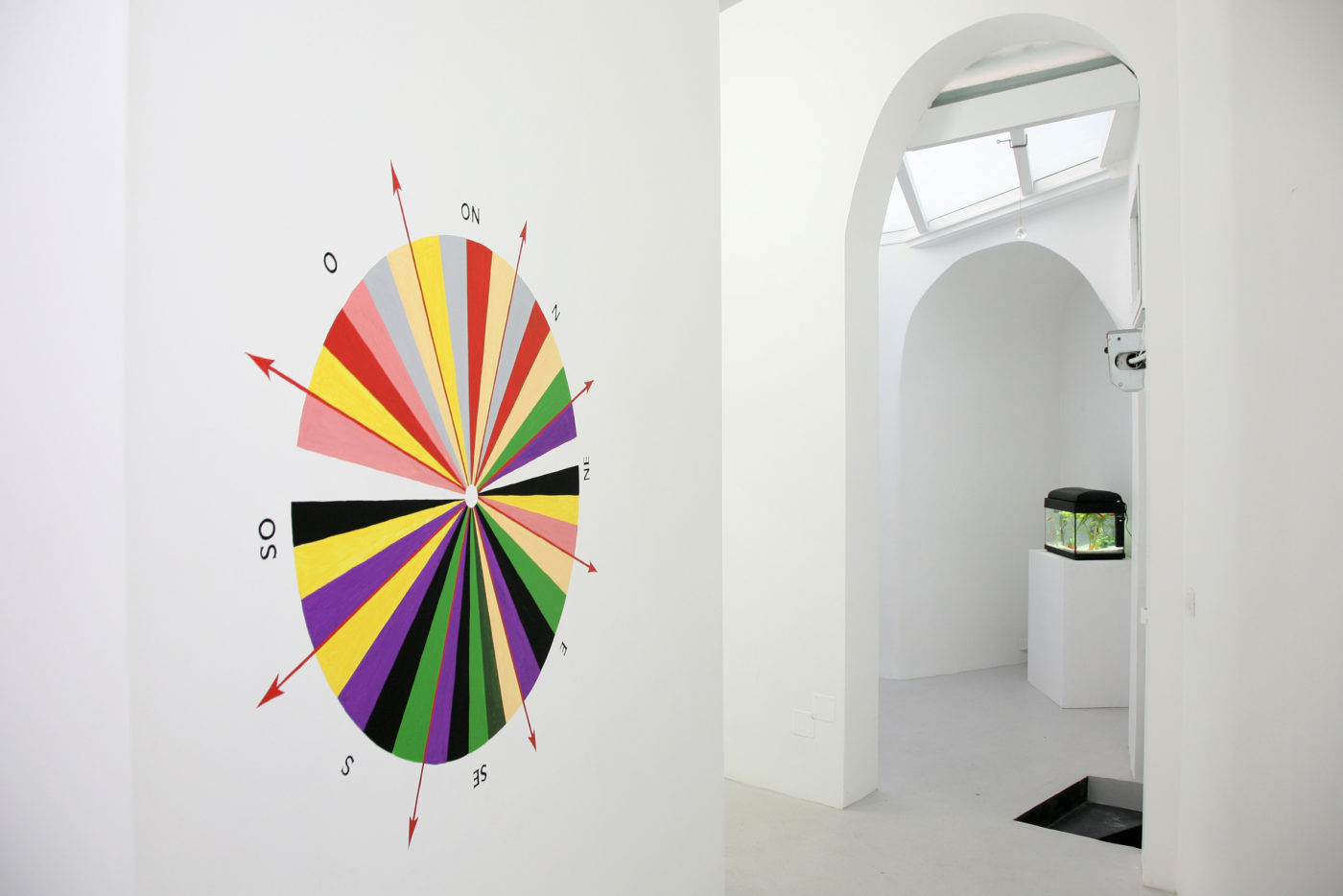 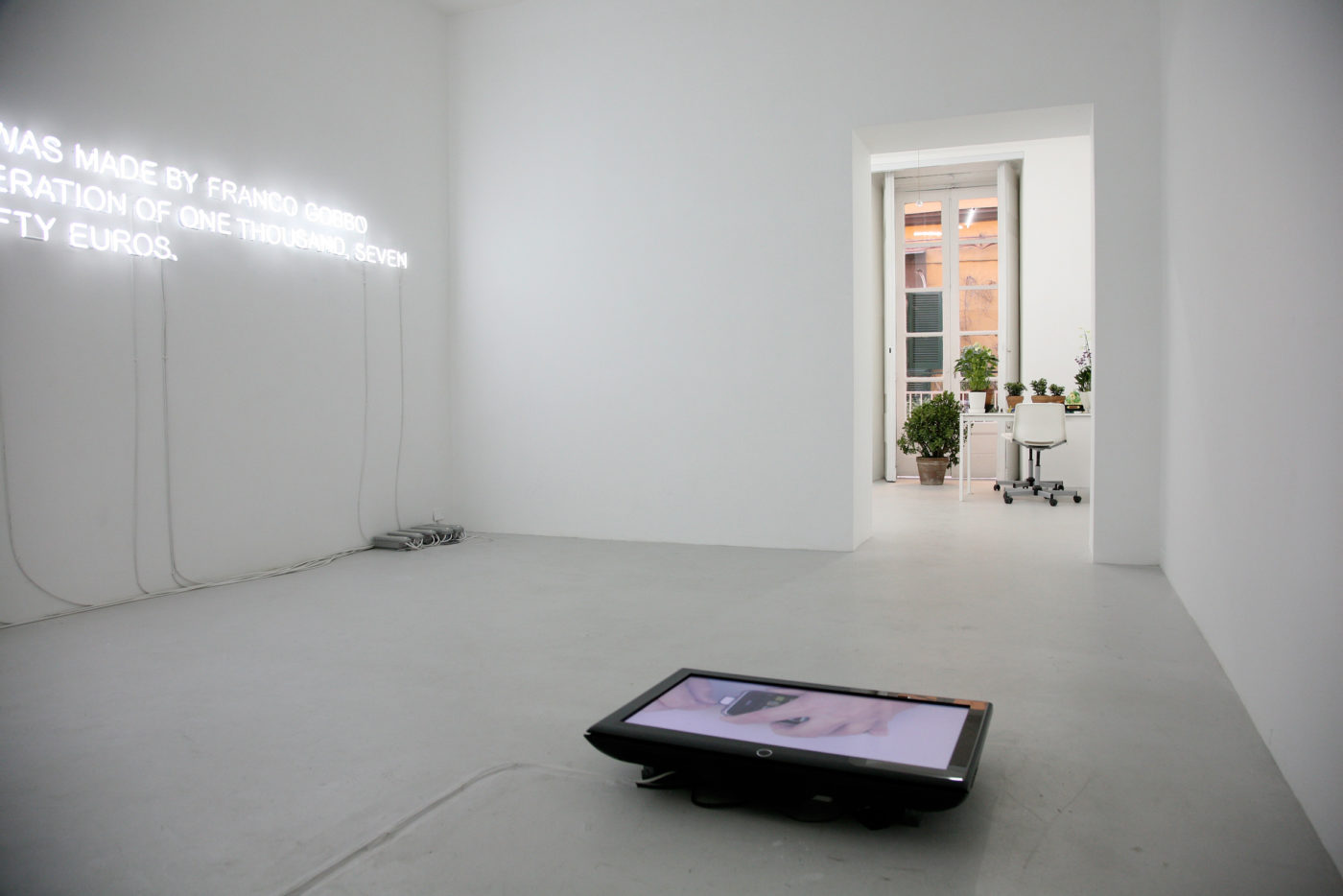 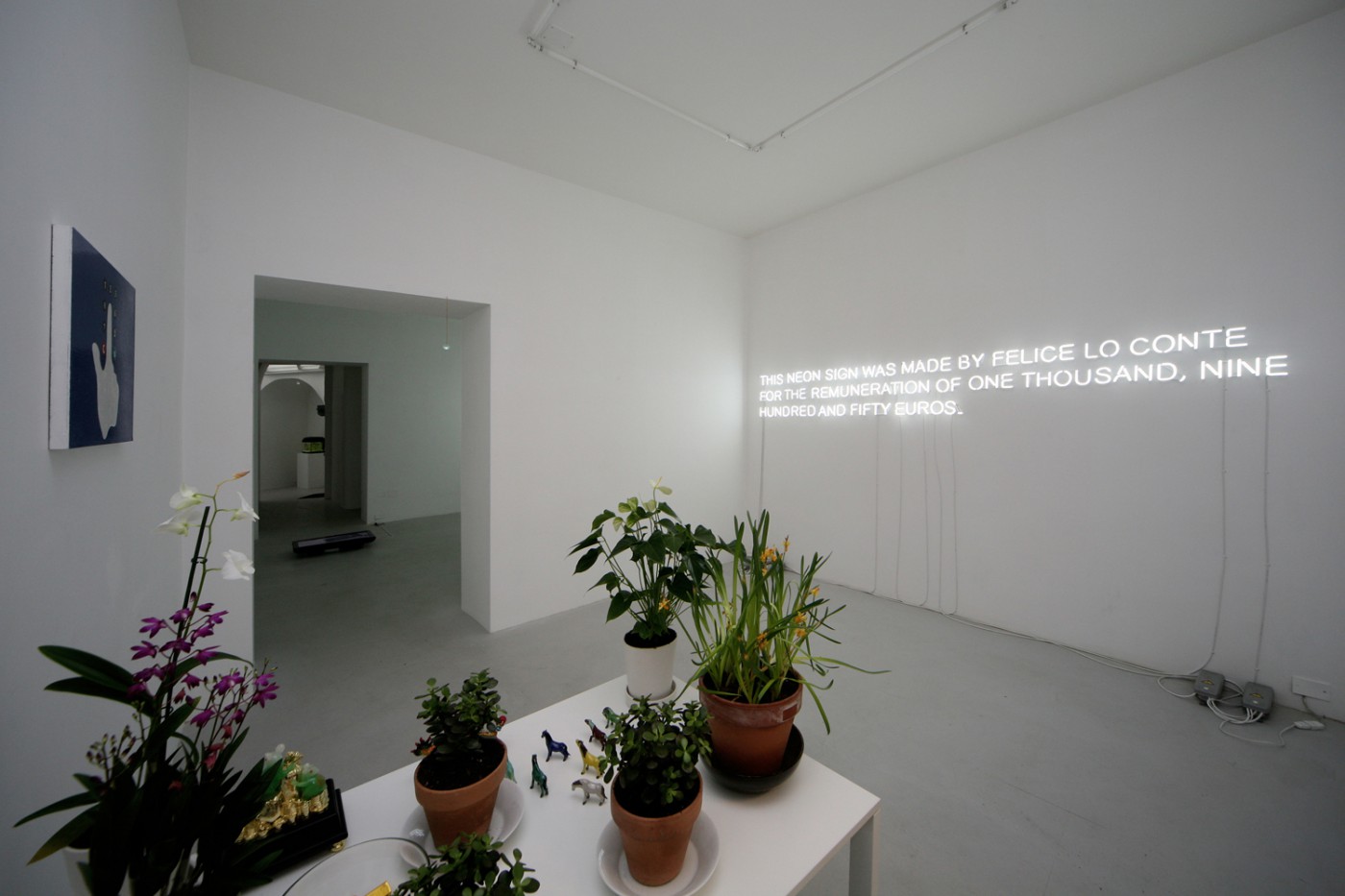 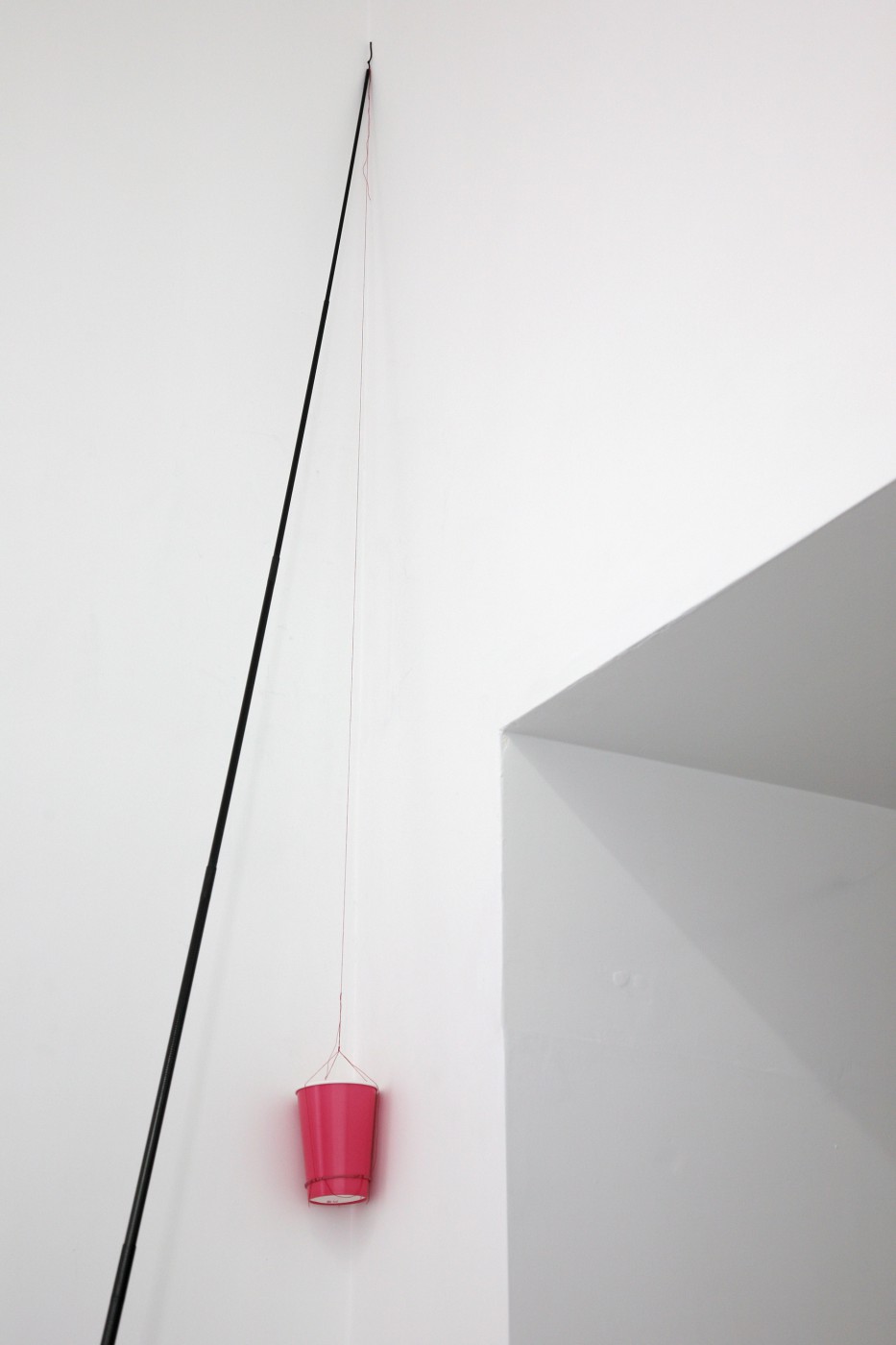 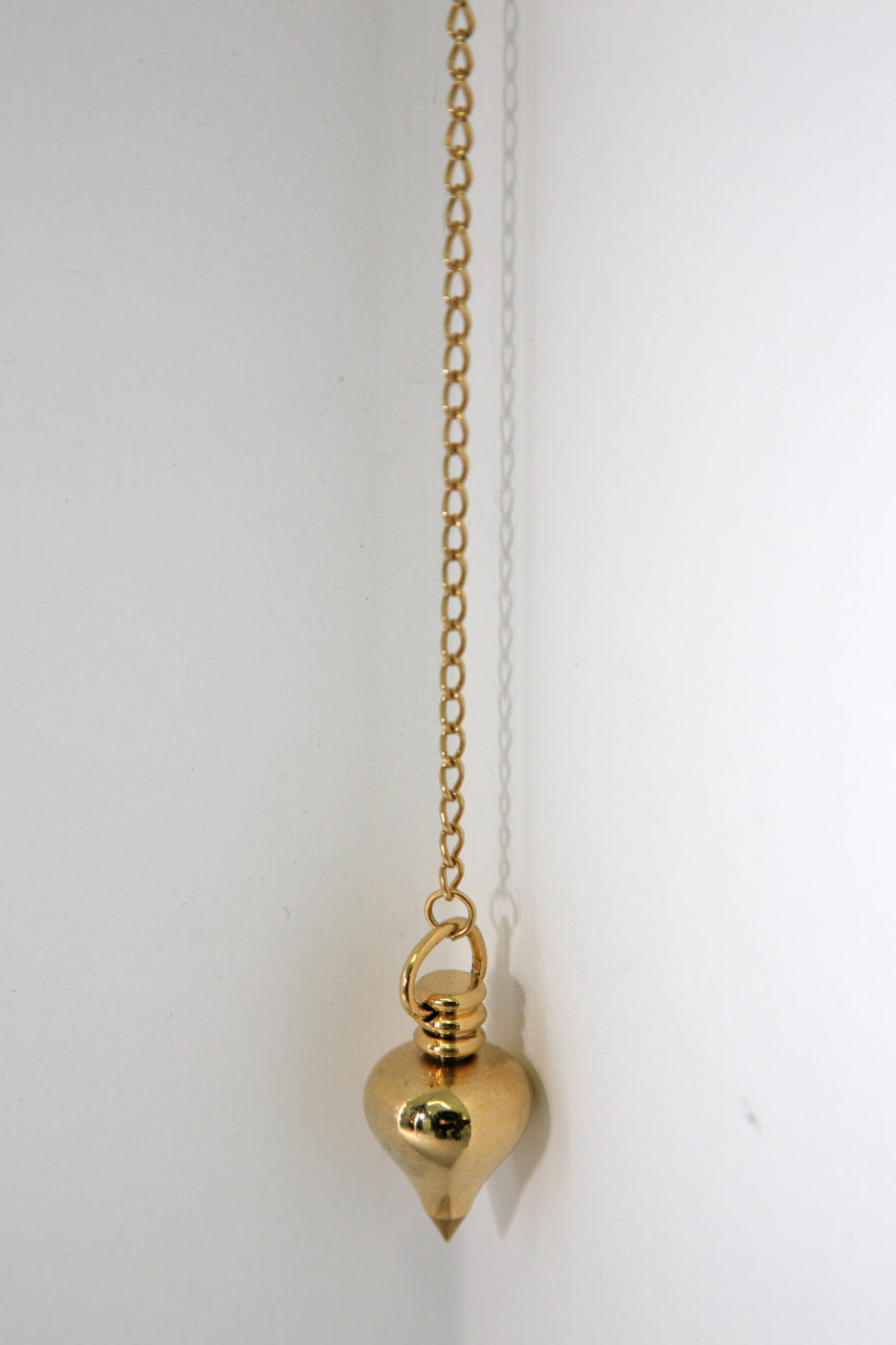 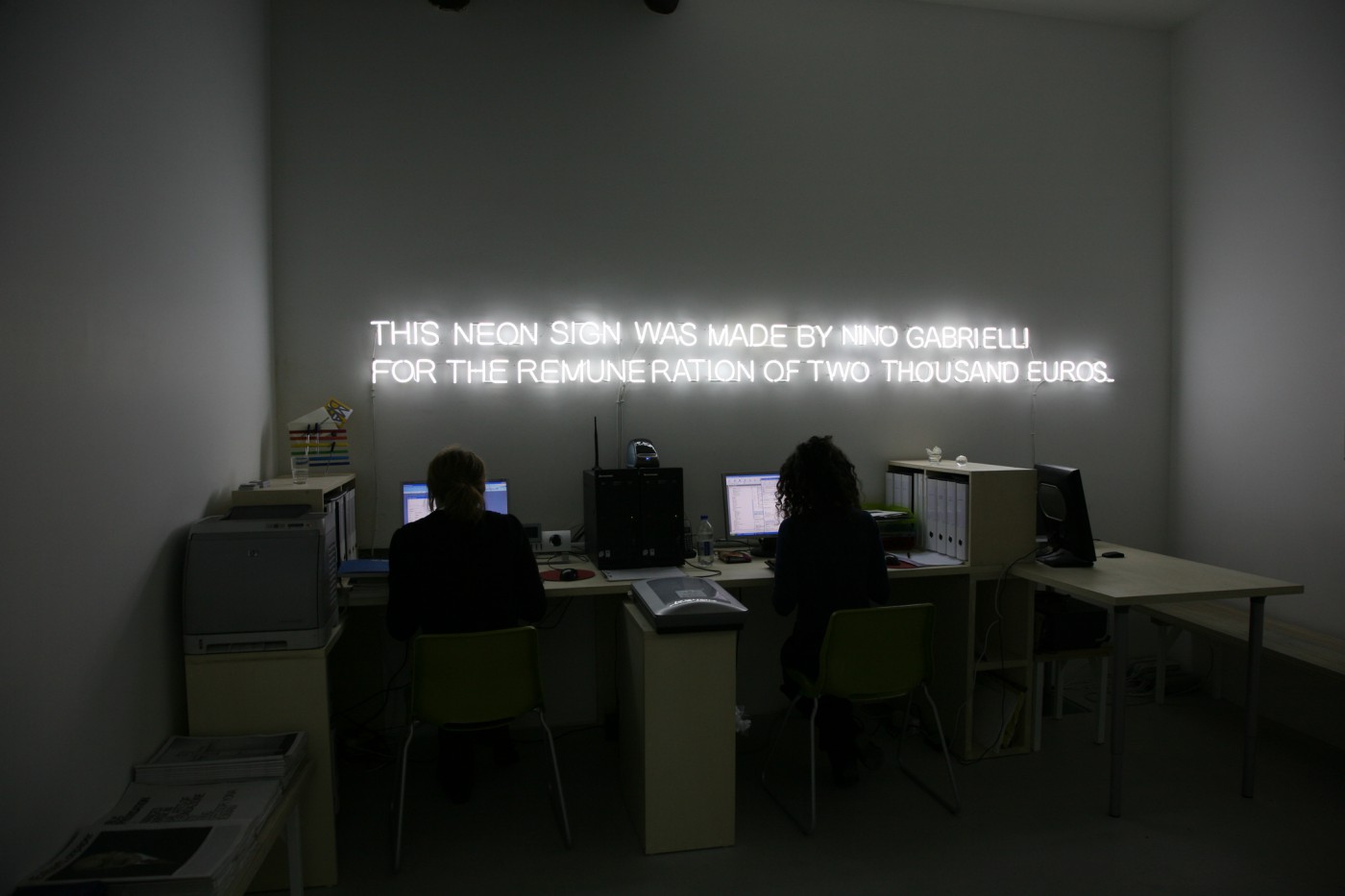 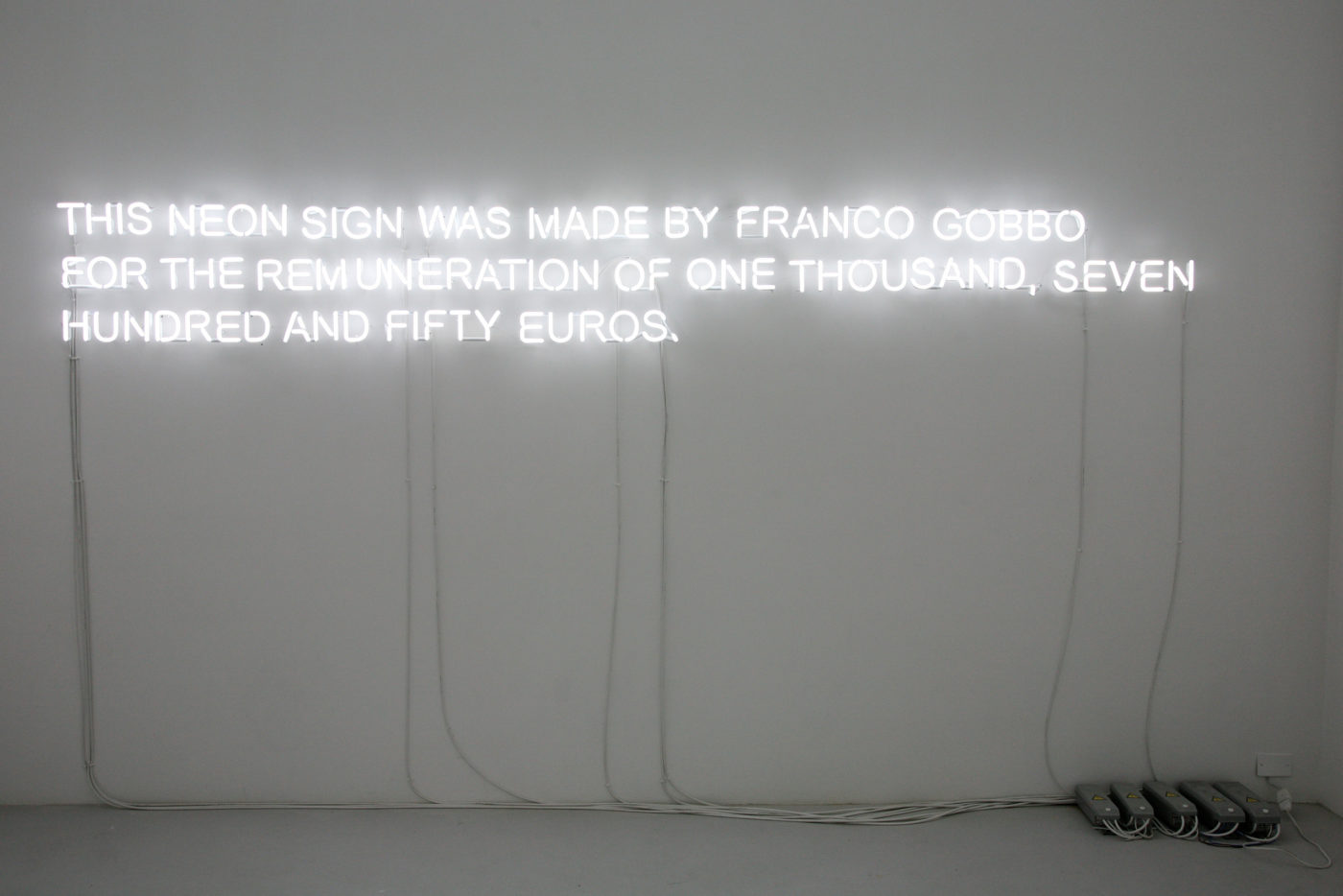 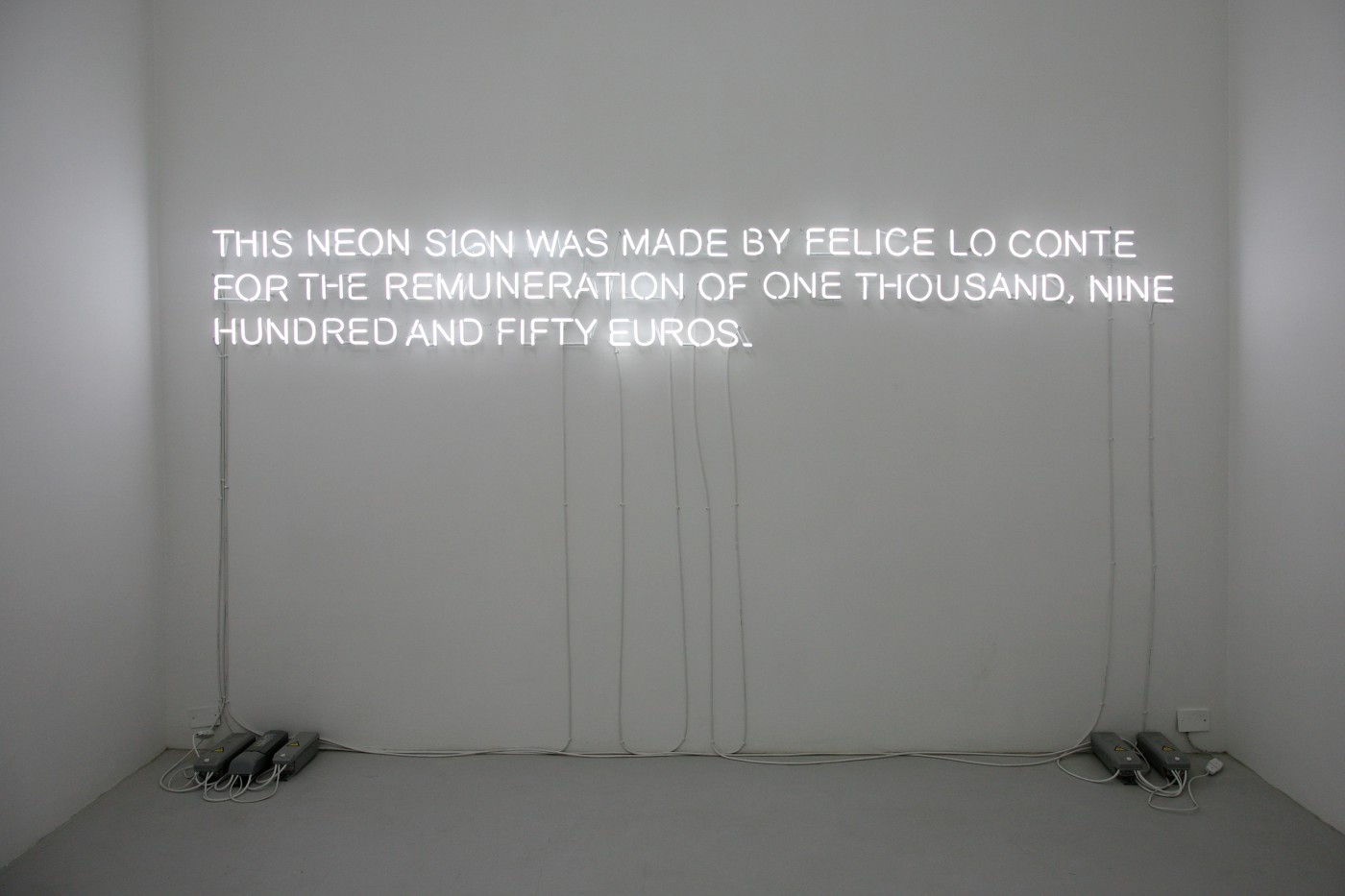 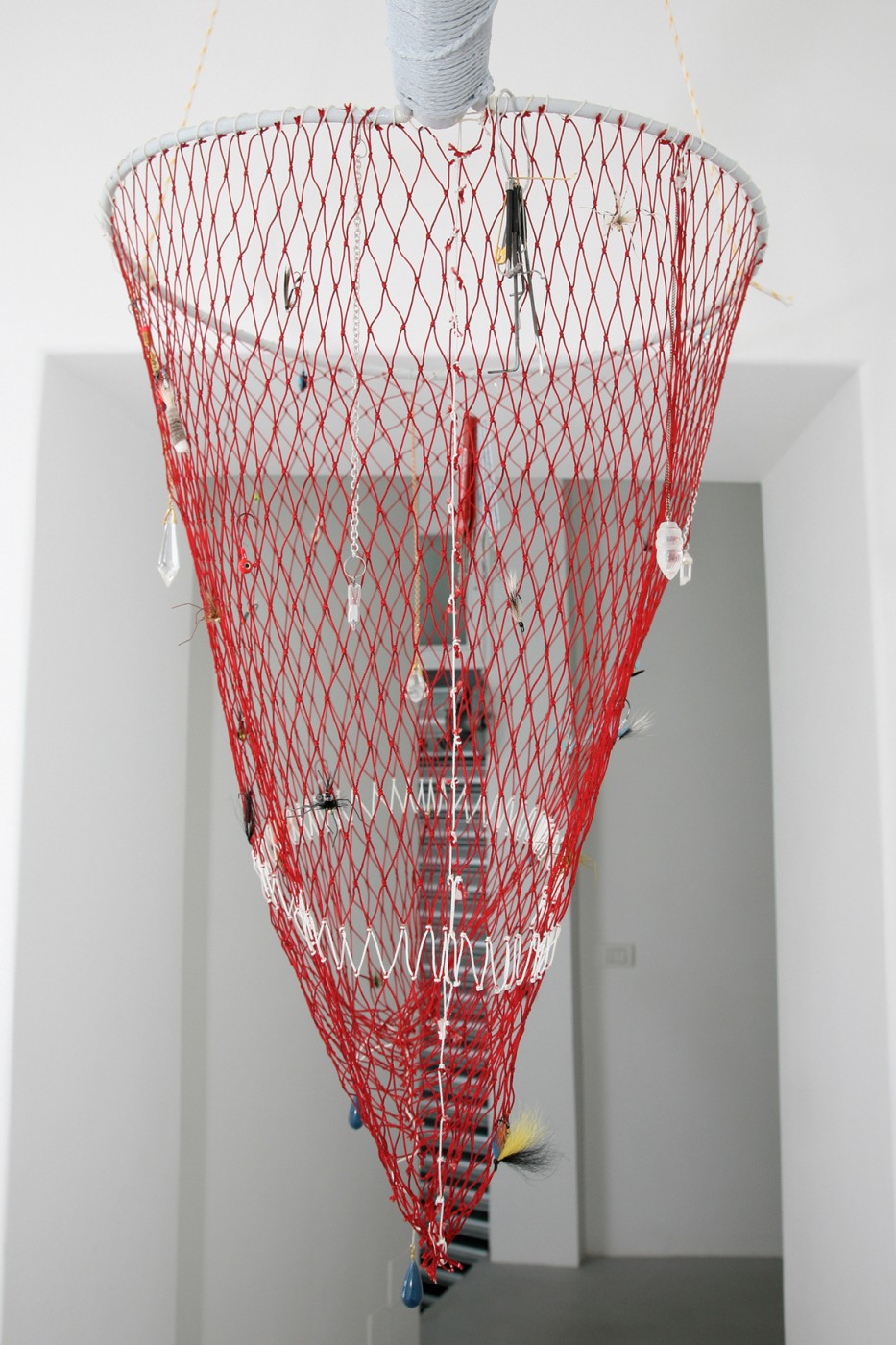 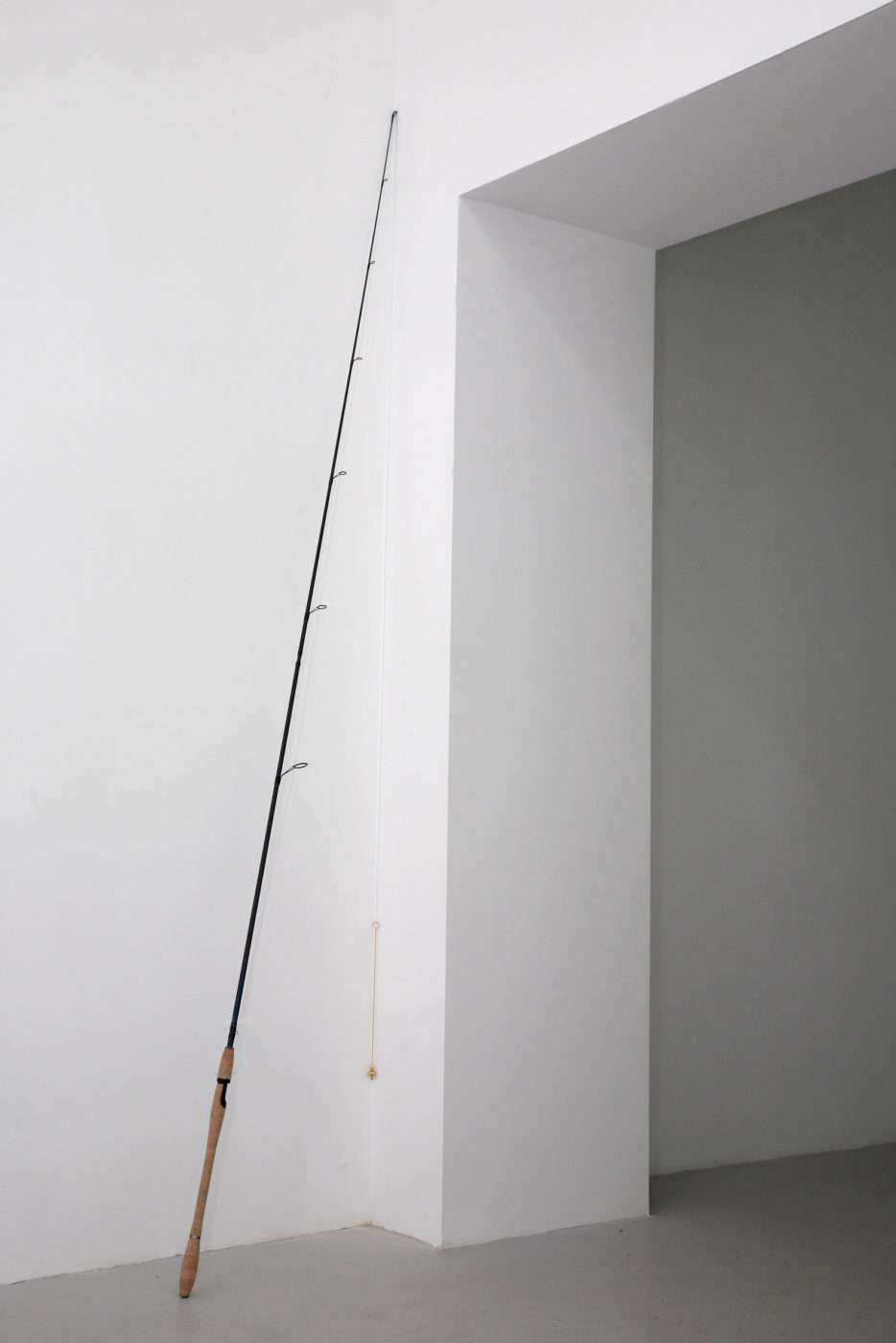 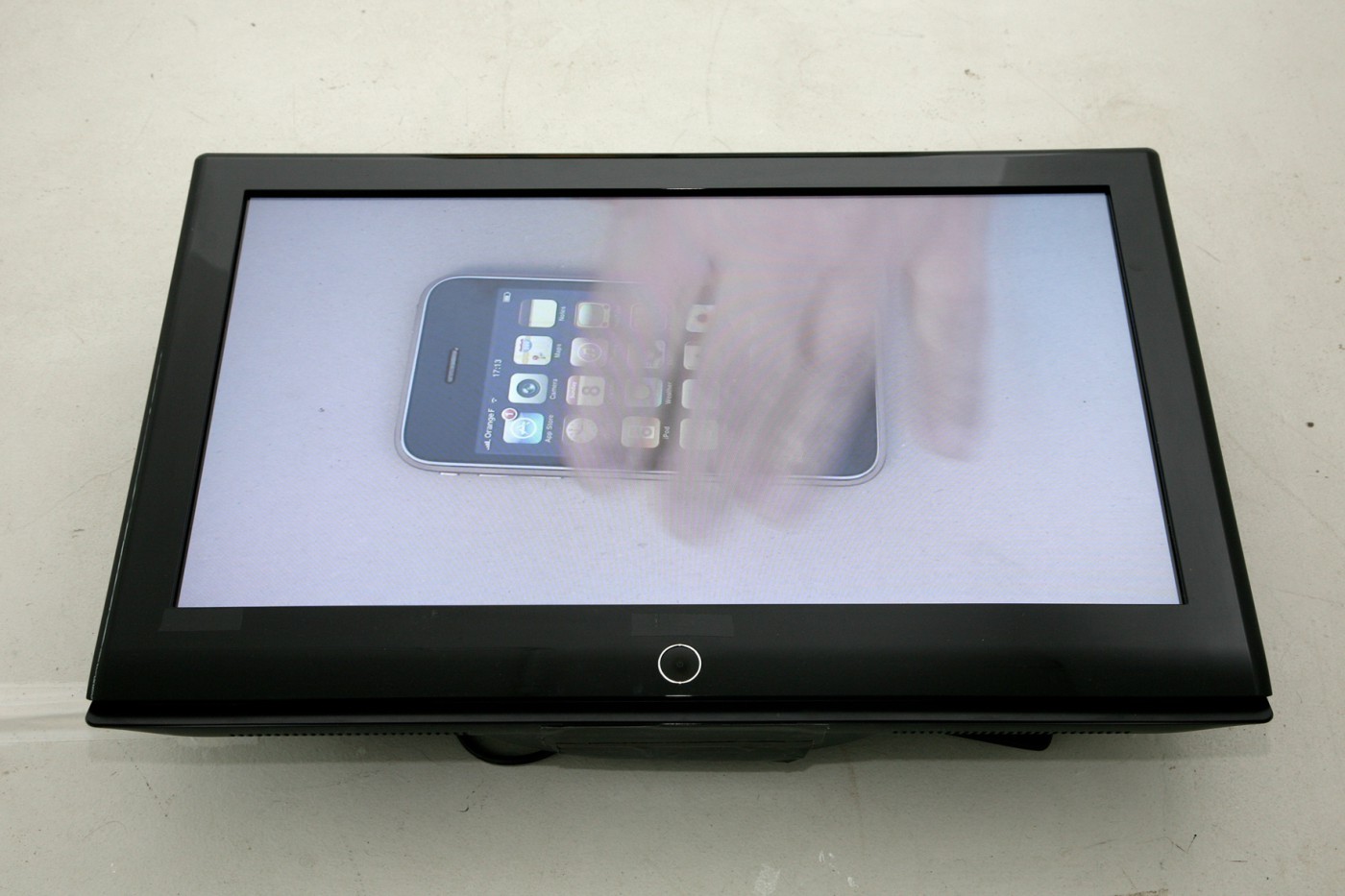 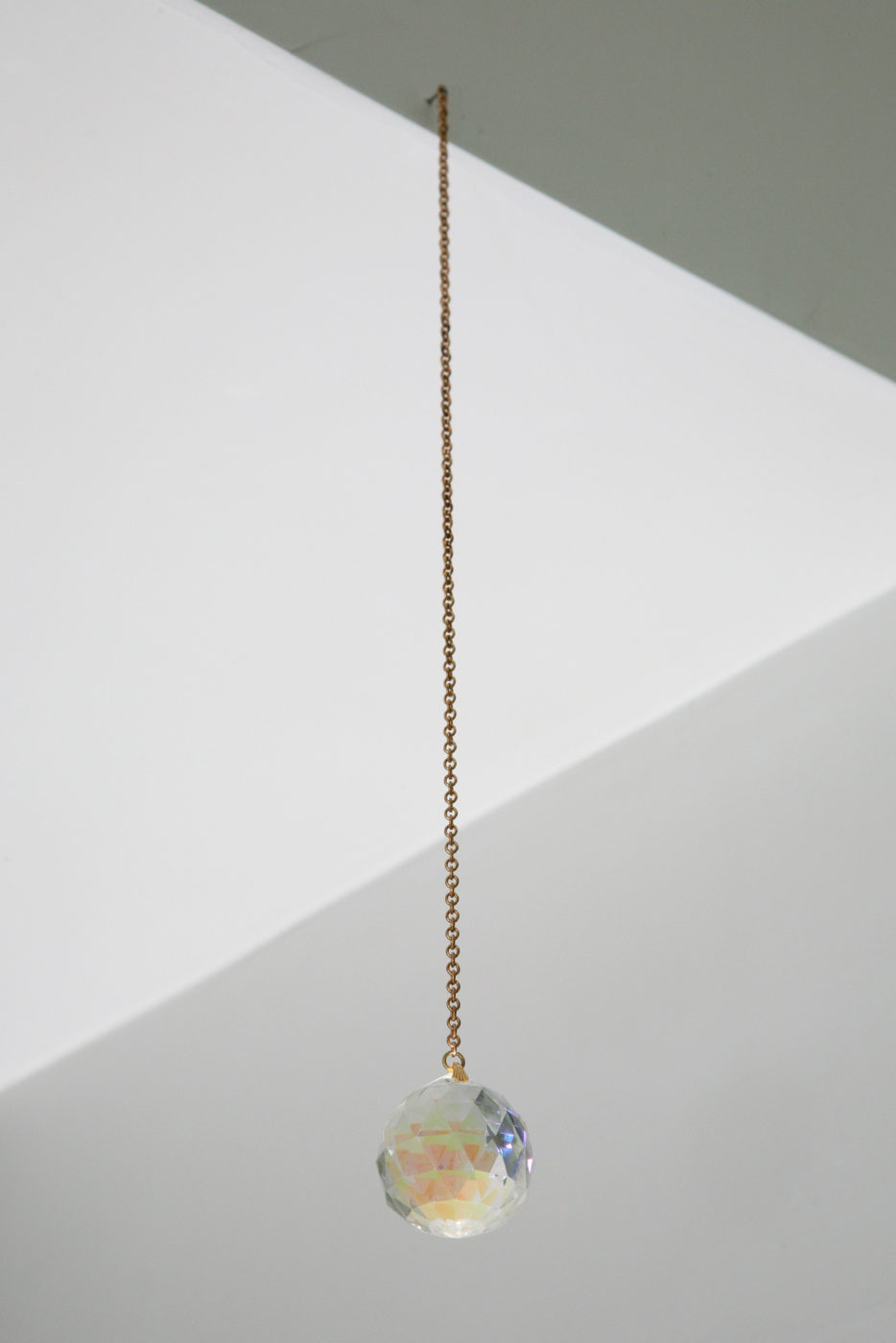 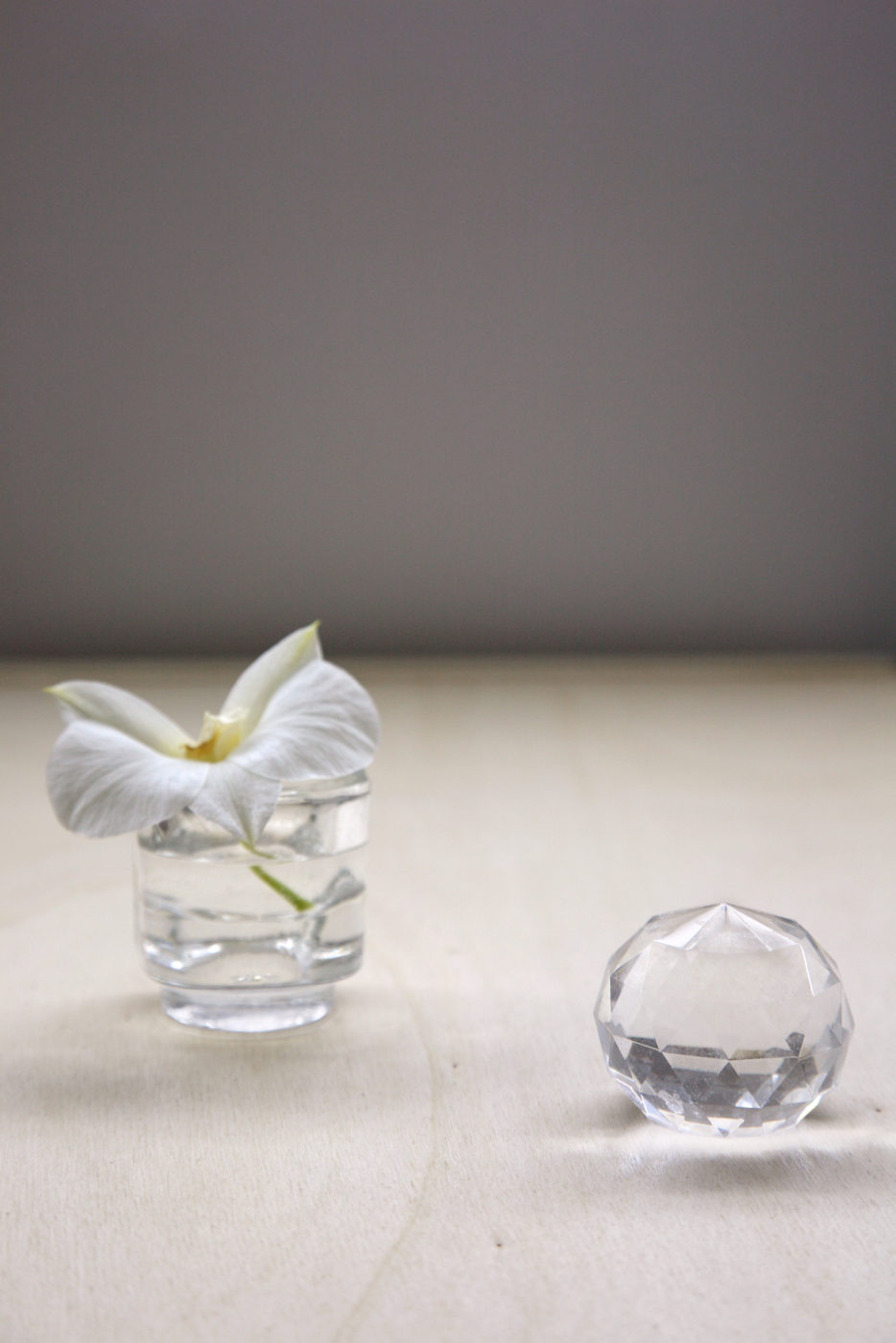 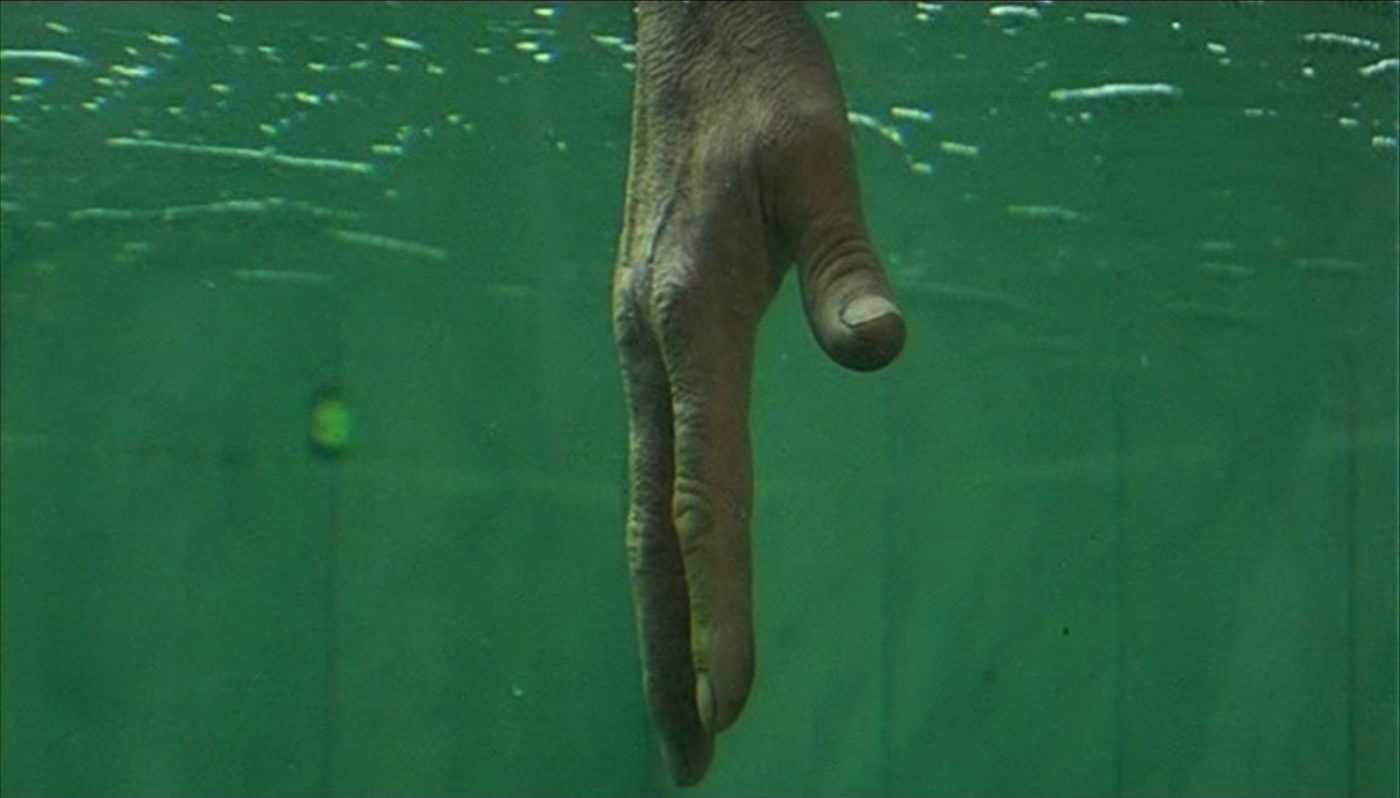 The close and ambiguous relationship between art and decoration is the knot from which Claire Fontaine’s exhibition Interior Design for Bastards develops. The paradigm of interior design morphs here into a metaphysical concept to be read through the prism of the New Age: the interiority here is also the one of the soul and the body is its readable surface and the first container of the Self. Studying with a lot of irony the rudimental basics of feng shui, Claire Fontaine proposes a symbolic rereading of the exhibition space, which is for her and the staff of the gallery firstly a place of work.  The practice of Feng shui demonstrates numerous strategies in order to keep the inhabitants and the users of a space in good health and to increase the monetary flux that go through it.  At a time of extreme fragility for the philosophy of the liberal economy, “Interior Design for Bastards” asks indiscreet questions about the objective necessity of money and the way we inhabit space and our body especially whilst working.  The series Masks presents paintings executed by Mexican sign painters displaying faces covered by beauty masks. These objects appear monstrous and make the wearer unrecognizable with the promise of improving their later aspect. Masks are traditionally ritual tools used to help the persons that wear them to abandon their subjectivity. Through these studies Claire Fontaine analyzes the uncertain transitional phases proper to all cosmetic practices.The two sculptures Untitled quote fishing as a metaphor of economics. One recreates an existing device to collect charity through a fishing rod, the other uses a version of a Passe-partout (Leurre) associated to an artisanal net. The Passe-partout (Leurre) is constituted by a group of hand made lock-picks, potential tools to break into locks associated to fishing bate and hooks, that make them in the same time visually attractive and impossible to use.The installation, This neon sign was made by … is composed of three neon works that repeat the same sentence – “This neon sign was made by (…) for the remuneration of (…) euros”– and explores the problematic of difference and repetition : the only differences between the three neon are the name of the maker and the amount of his remuneration. Referring to the tradition of tautology that pervades conceptual art and its statements (for example Five words in blue neon by Joseph Kosuth) Claire Fontaine focuses on the specific tautology produced by the general abstract equivalent that regulates the work transaction and on the status of the artwork, that even being an artefact, occupies an eccentric position in respect to the use value and the value of exchange. Untitled Box (Steel Channel Piece, 2/2), 2007 is a work on the recuperation of objects, surfaces and references. An unfolded cardboard box previously used to transport part of a sculpture by Bruce Nauman is framed  by a plexiglas box. A video installed on a horizontal flat plasma screen shows the destruction of an Iphone, a life style symbol and tool for a certain use and consumption of sounds and images. Through the material and physical demolition of an object that dematerializes the bodies Claire Fontaine reflects on the liberating potentialities of a new luddism and of a critical iconoclasm.