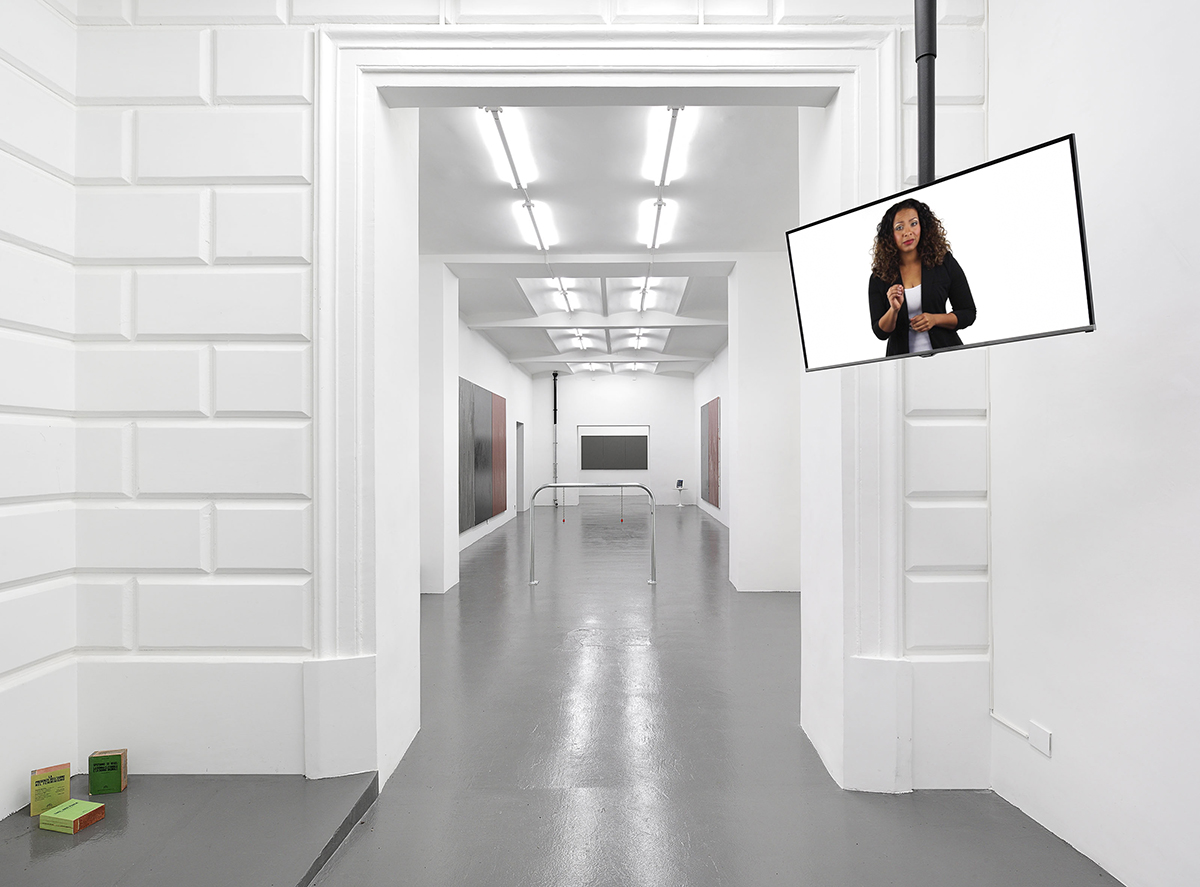 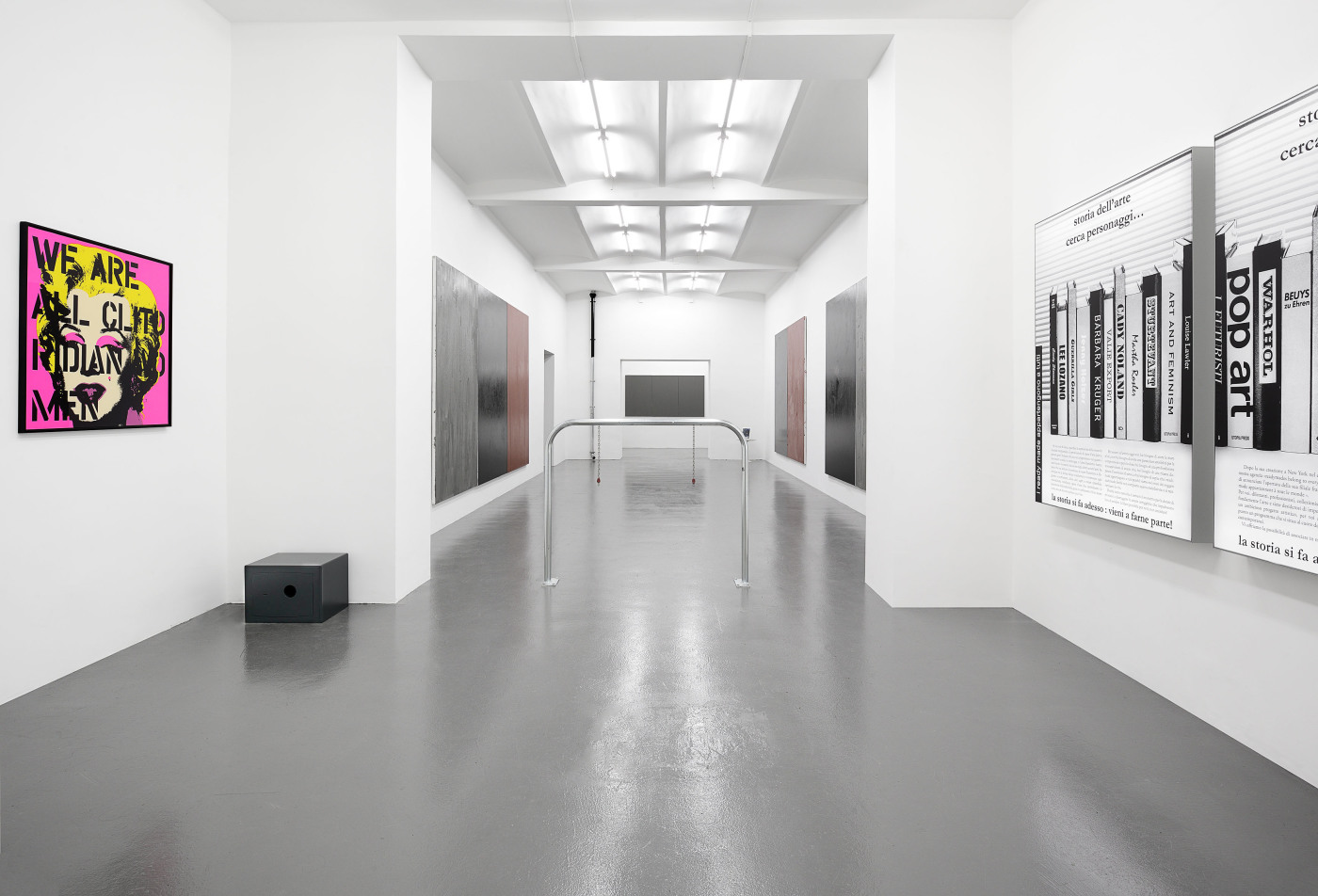 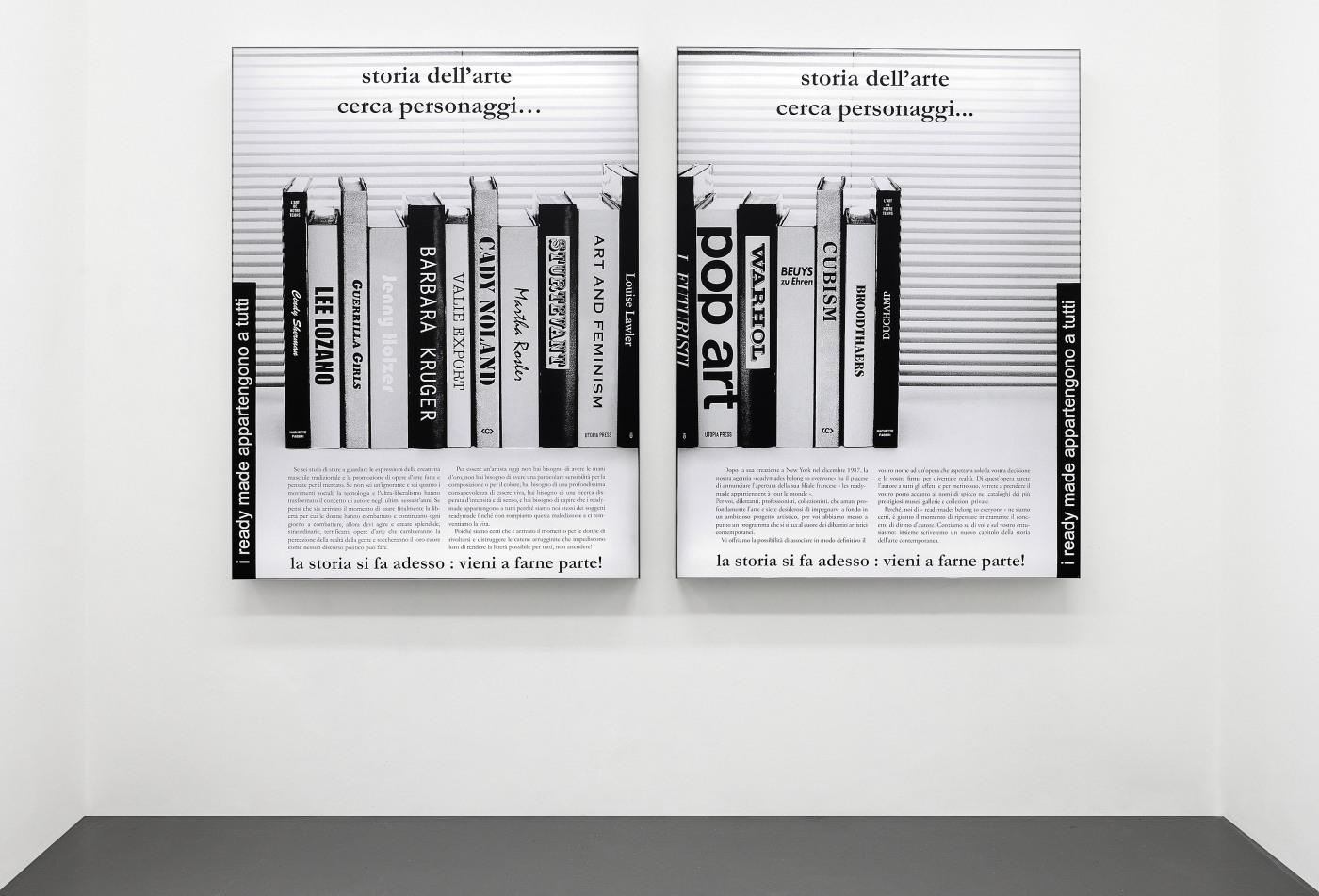 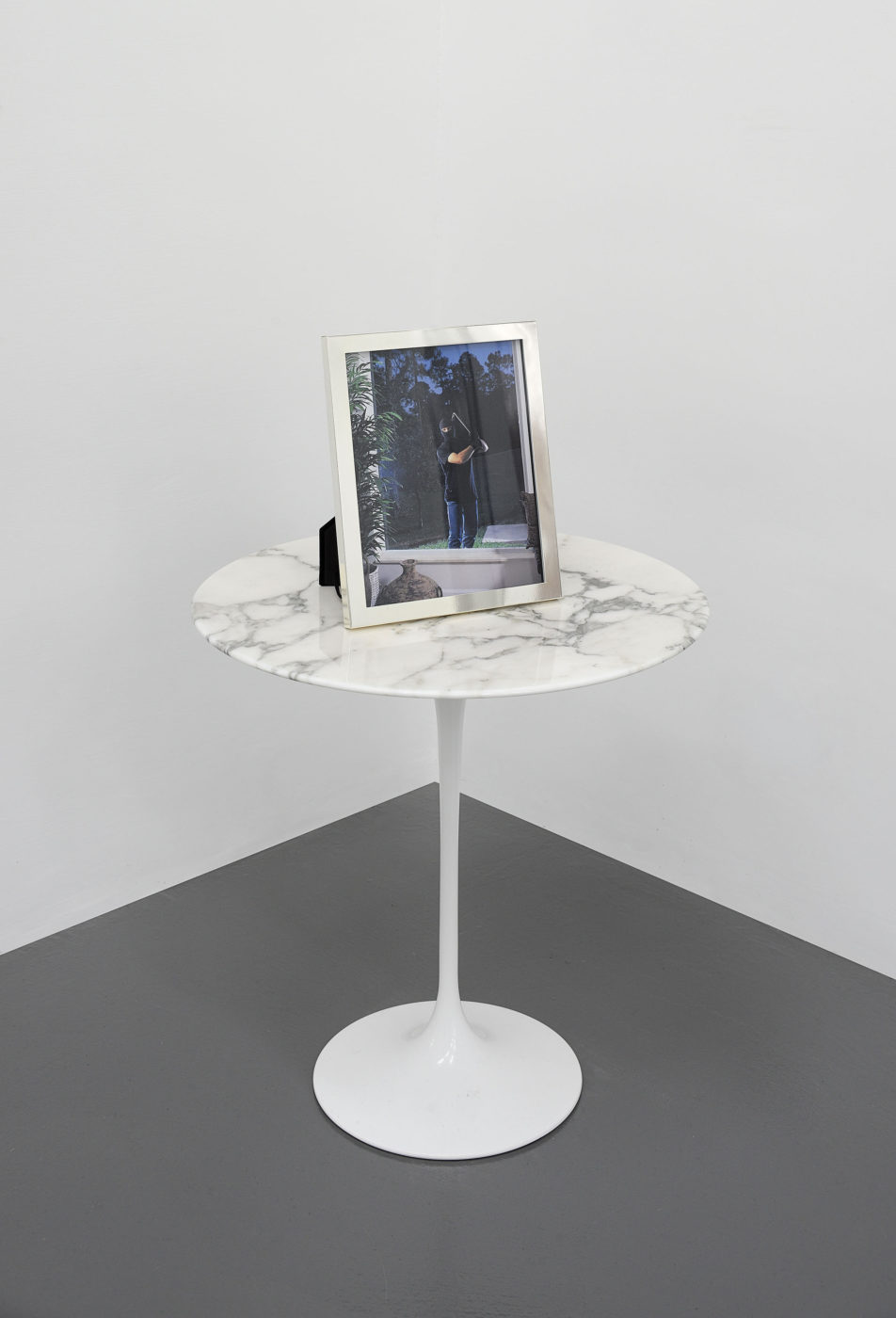 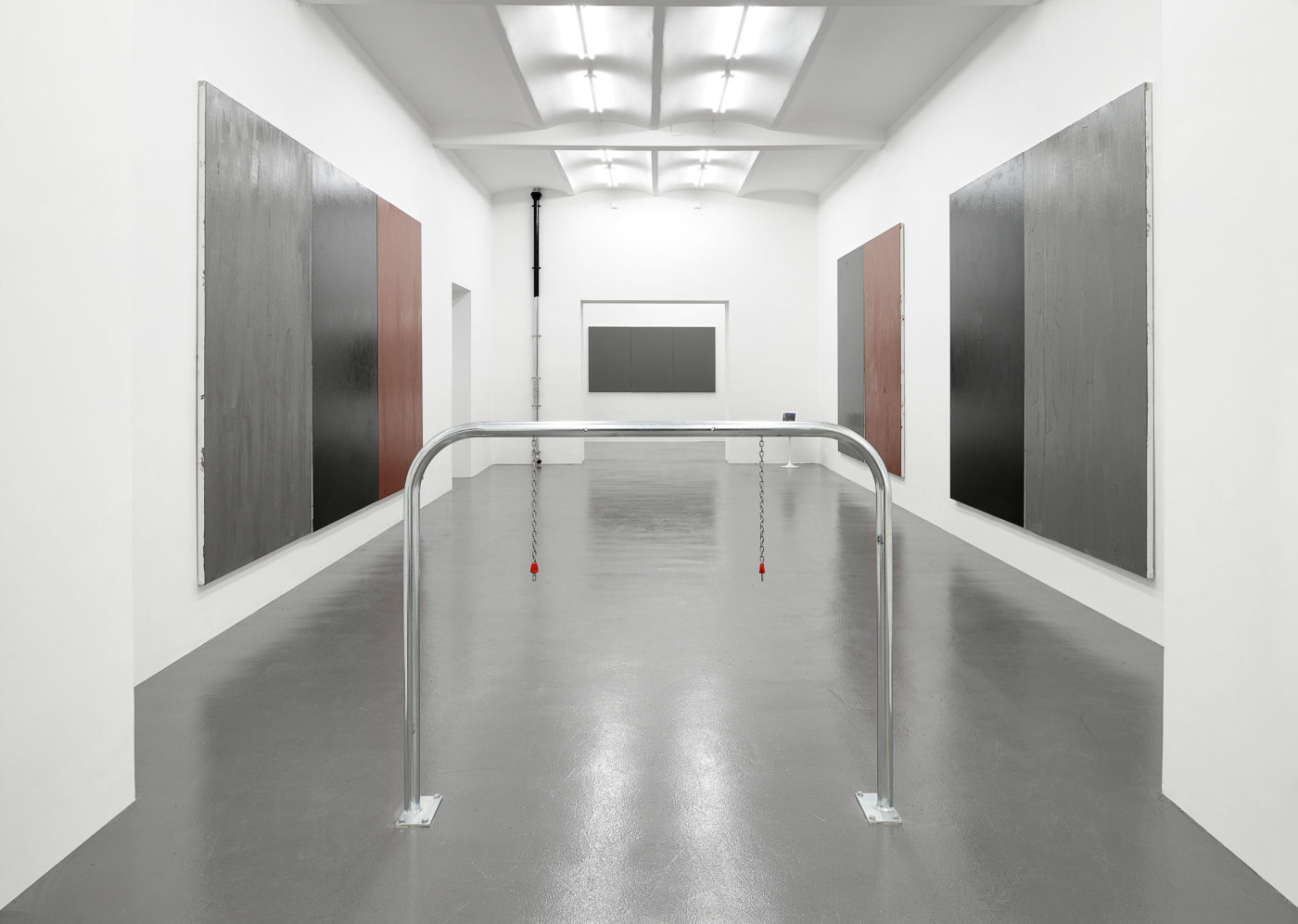 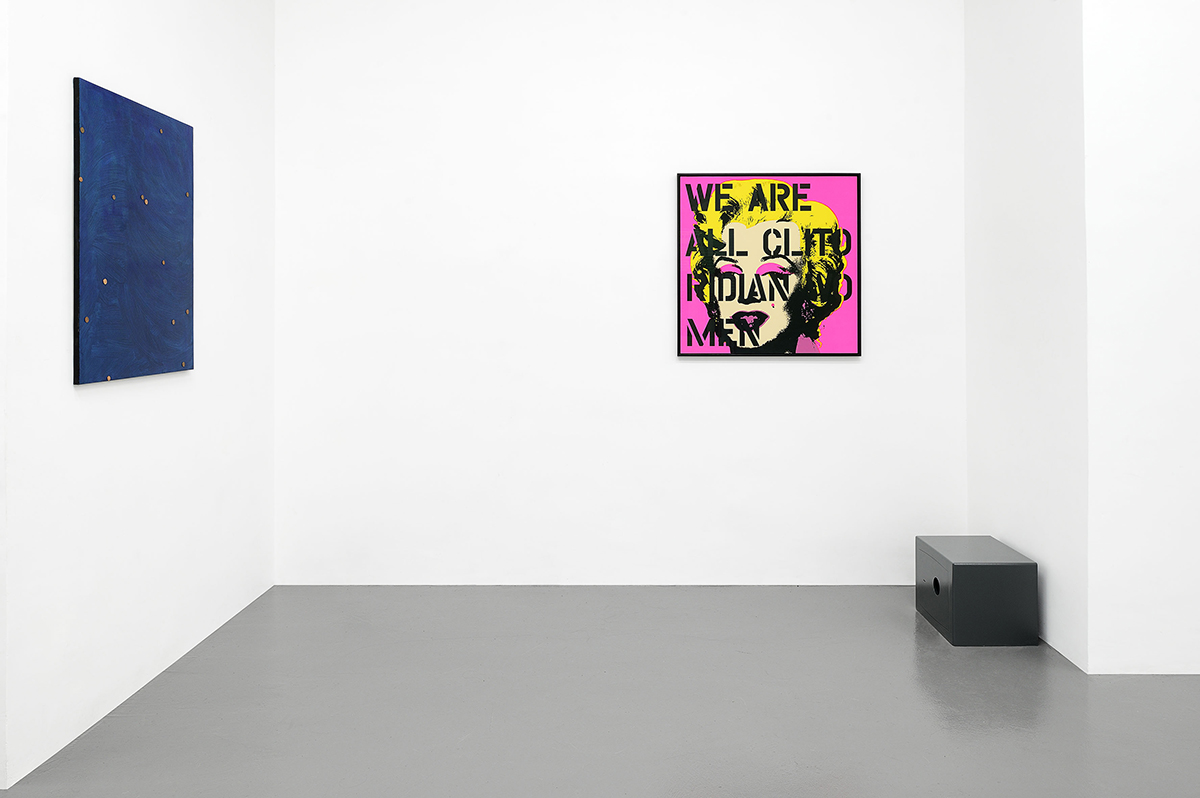 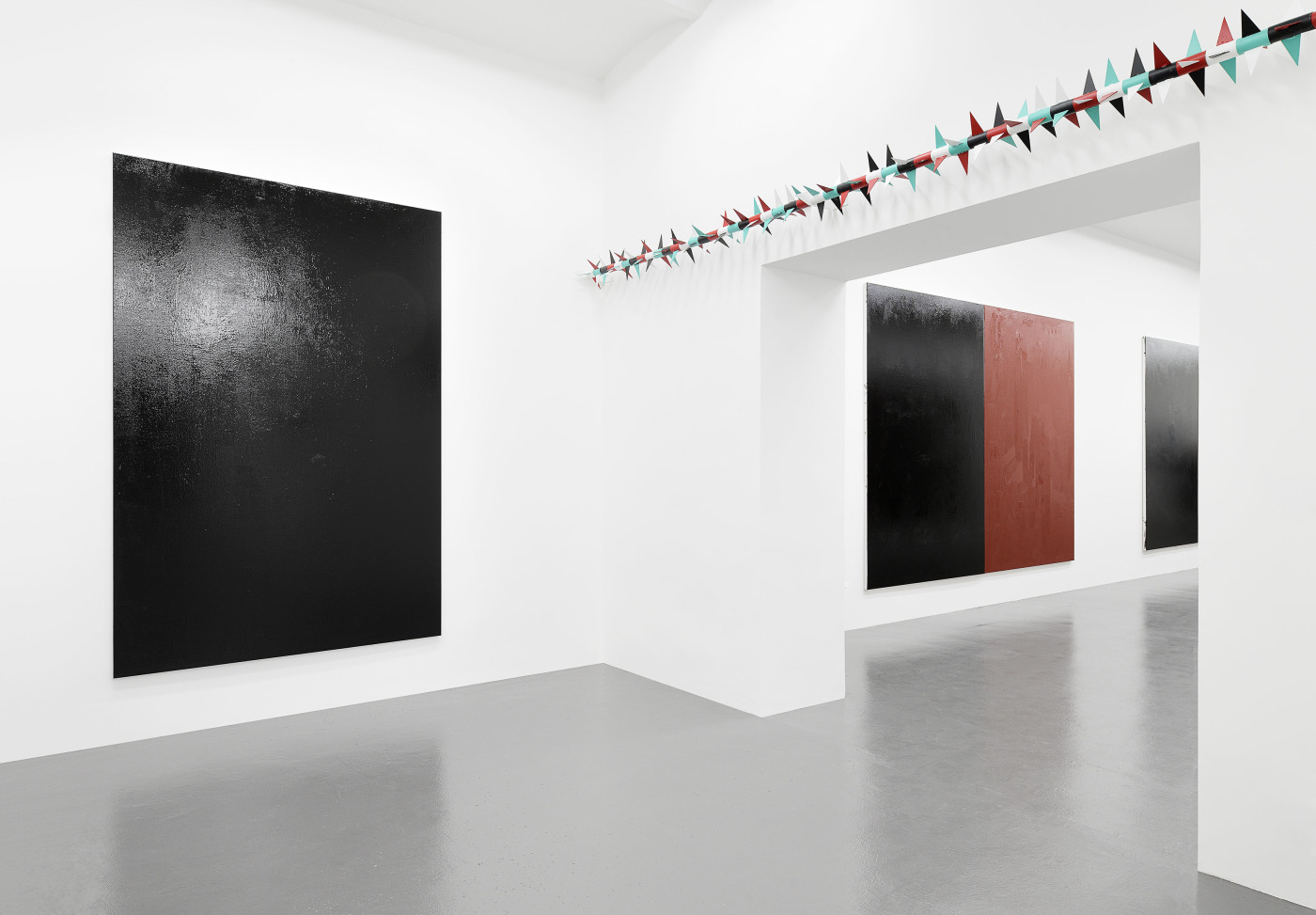 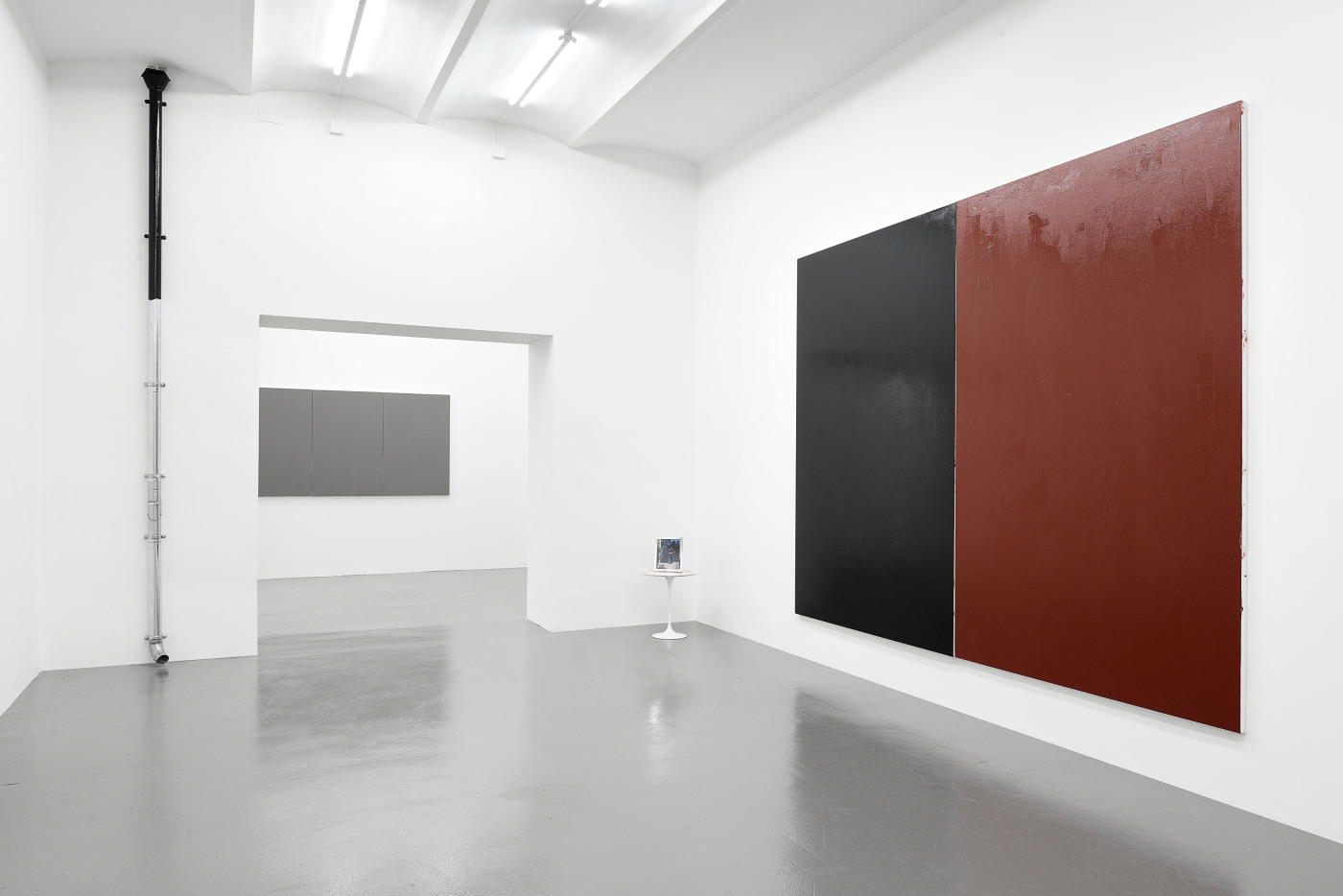 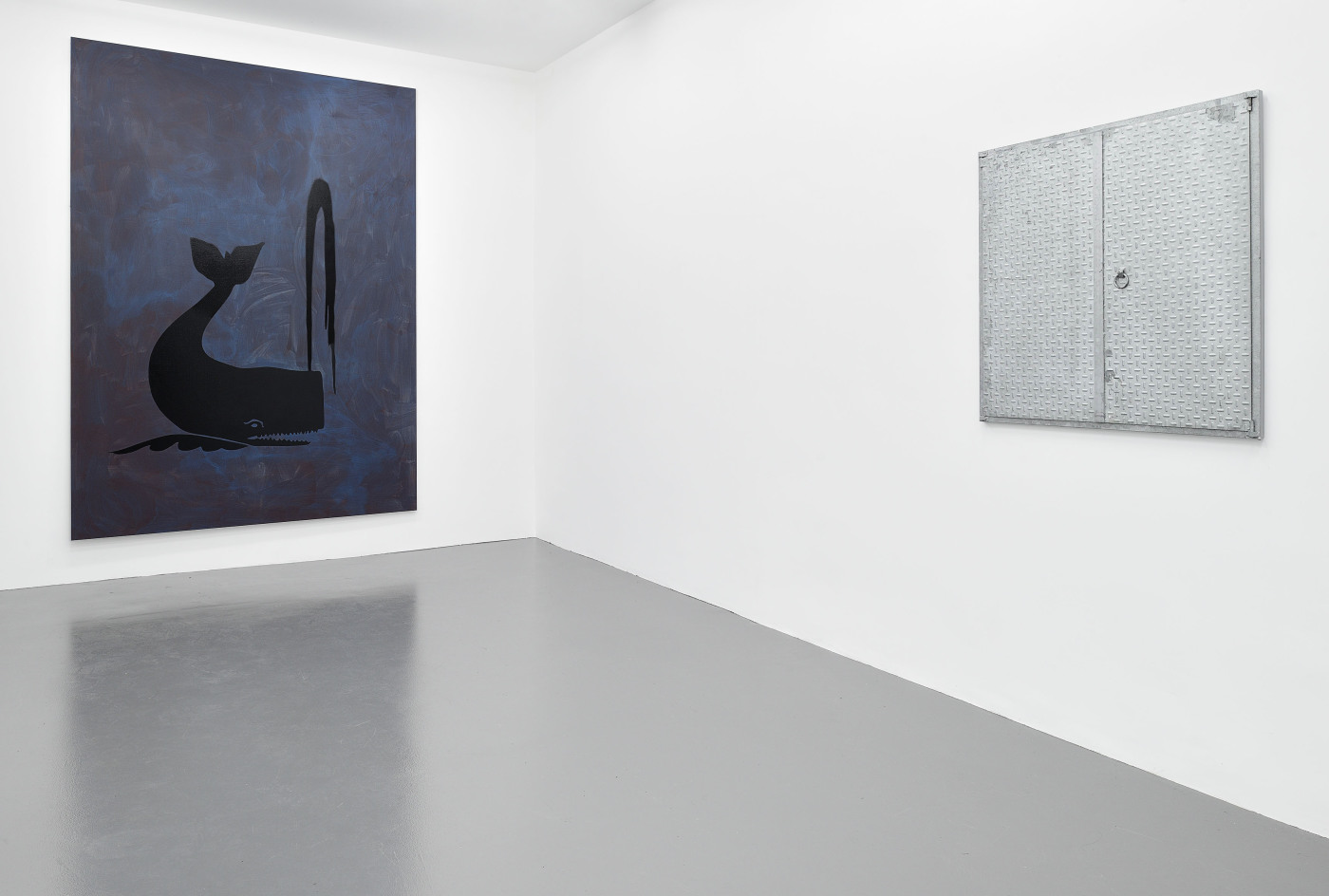 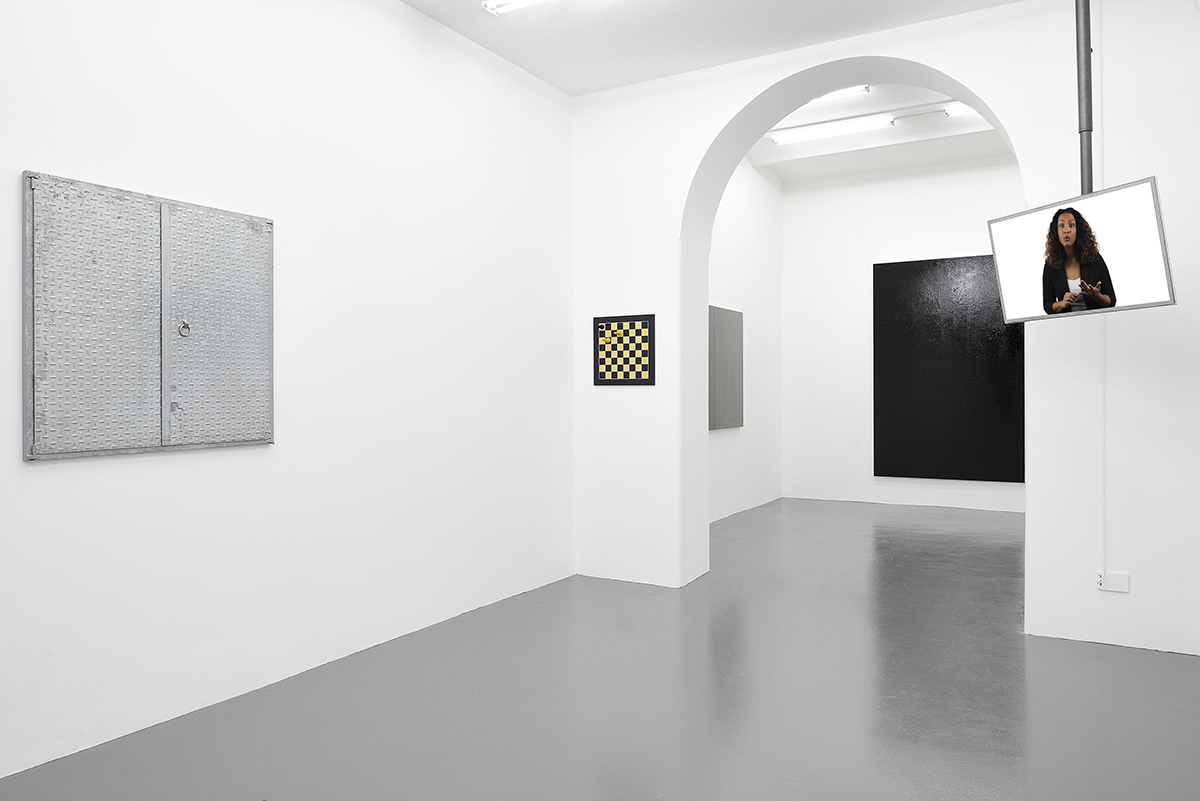 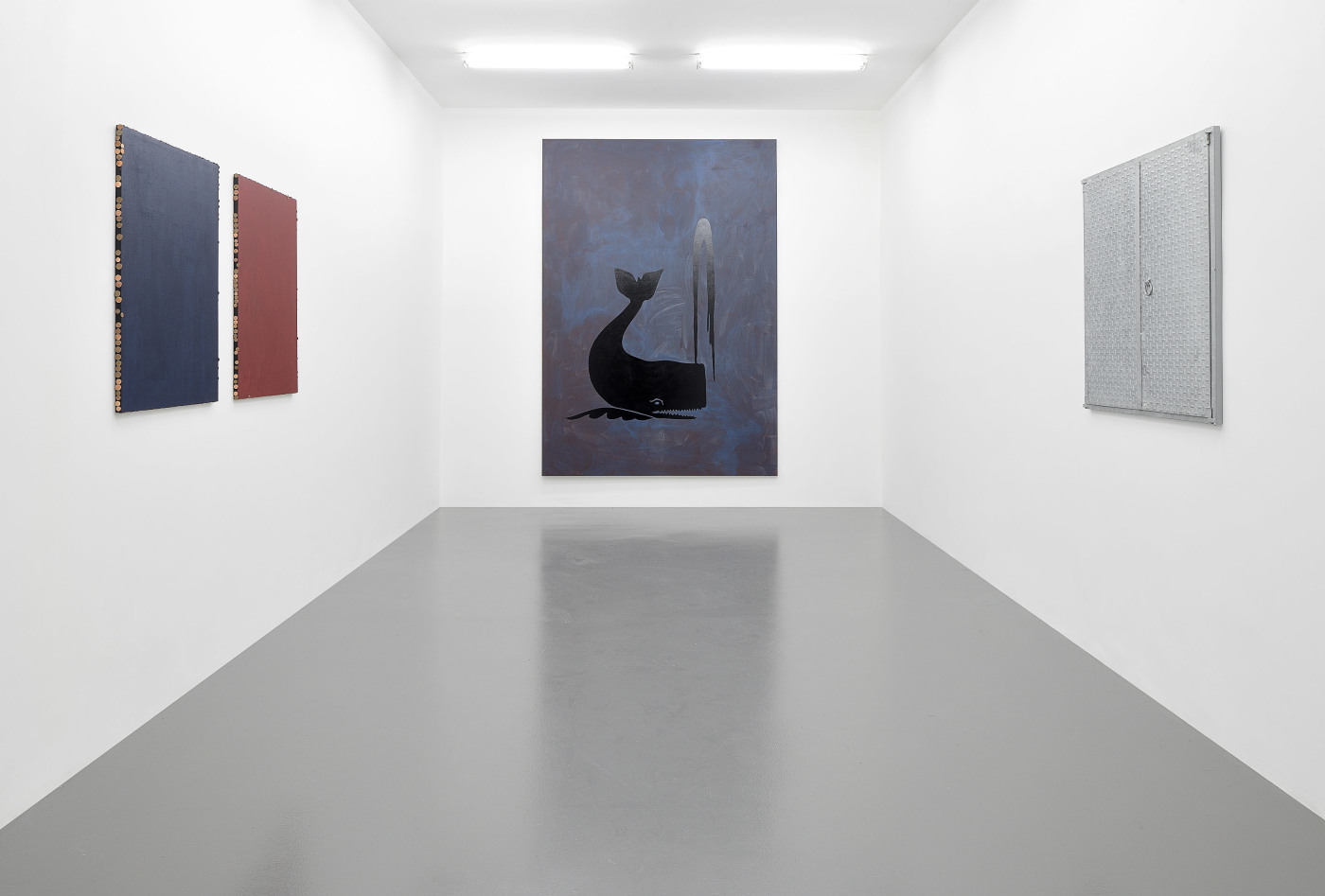 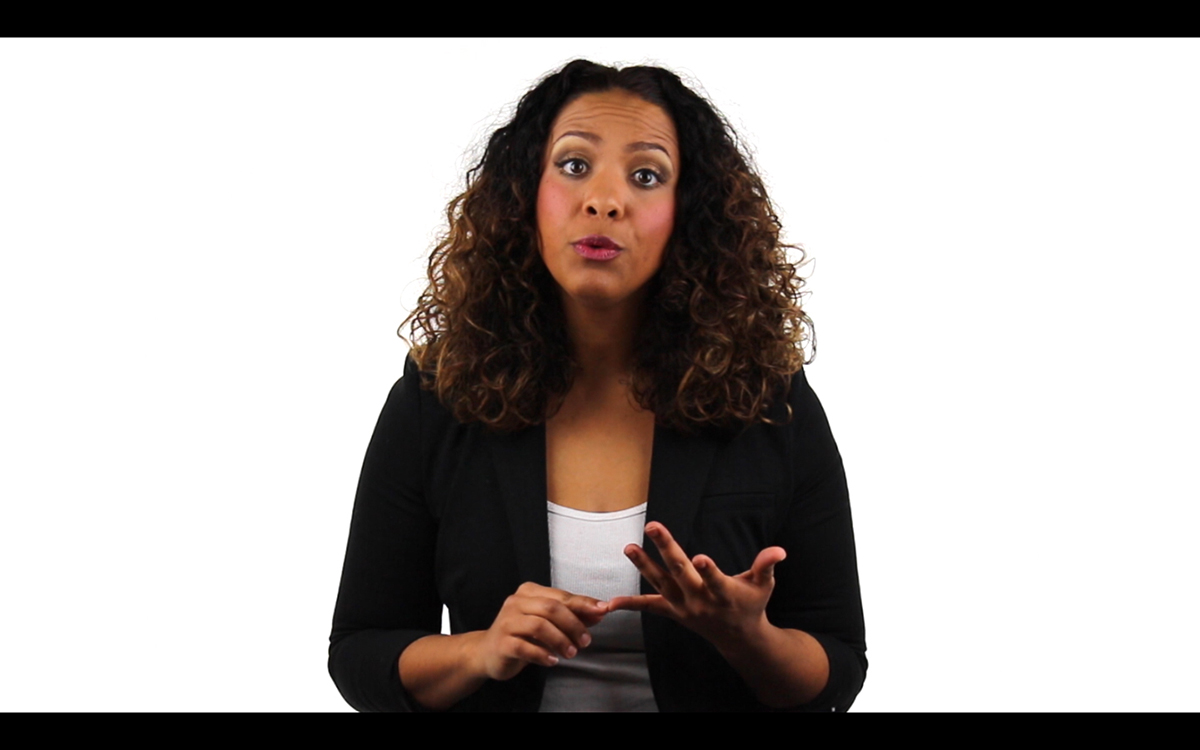 Pretend to be dead is an exhibition developing on several layers, sometimes parallels, sometimes superimposed, diverse material and conceptual investigations. The title refers to a form of passive defence adopted by some animals against predators that allow them, by simulating death, to keep their lives. Survival strategies, the violence that inhabits space and personal relationships, are the red thread that runs between the works.

Untitled (Study for Toilet Snorkel/US patent) is a work inspired by the illustration of an American patent from 1982 for a device that allows people to survive in a smoke filled space, by breathing through a tube the clean air in the sewage pipes; the work is a clear metaphor for when at times survival must be found in unappealing and toxic places. Untitled (Fresh Monochromes) are eternally fresh paintings realized with anti-climb paint that never dries and is commonly applied on walls and fences to mark and deter the thief or the potential intruder with a stain that materializes his guilty intentions on his body. The choice of using this type of paint on the canvases transforms them into potentially aggressive objects for the viewer, compromising the domesticity that makes paintings the easiest artworks to live with on a daily basis. The colours of the paintings are determined by the three colours of paint existing on the market. Untitled (Begging painting) are on the other hand elaborate monochromes where the canvases have been stretched over magnetic sheets, which keep through their force some cent coins attached to the surface, the small change sticks to the paintings only through the pure power of magnetic attraction.

Untitled (Black Whale) challenges ironically but passionately the large format in painting by quoting an image of a whale illustrating an old edition of Moby Dick. The jet reproduced on the painting echoes other liquid elements present in the exhibition like Untitled (Mr. Skinny Legs), a down-pipe commonly used for evacuating rain water, painted above head height with anti-climb paint. The sculpture implicitly refers in its title to the Incy Wincy Spider song, that tells the story of a spider that climbs up the water spout, get washed out by the rain and then climbs back up the pipe when the sun shines again. The cycle of these fluxes here is embodied by the violence concealed in the interstices: inside the pipe a knife is concealed, accessible from the small trap. Another trap that no longer opens, because its doors have been soldered together, Untitled (Trap) is installed on a gallery wall where it materializes an external, imaginary and unreachable space, with the humid scent of a basement that this type of doors usually open onto. Untitled (Money Trap) is a sculpture that refers in its title and its form to a trap for monkeys, it is a safe where a hole has been cut large enough to allow an open hand to penetrate but not a closed fist holding something to exit it. The work refers to the risks of greed but also to the fragility of the devices supposed to protect our belongings, like the safe that is a symbol of inexpugnability.

Untitled (Rotary Spike: Noir Profond/ Blanc/Rouge Pouilly/Vert Ramin) is a sculpture fabricated from a defensive device to be installed on walls or fences in order to prevent intruders and thieves to penetrate a property; it is a self defence tool destined for outdoor spaces that is here de-territorialized inside the white cube and painted with festive colours that dissimulate its real nature and make it resemble a party decoration. Another ready-made Untitled (Parking Bay) is constituted of a metal arch used to park shopping trolleys, with two chains sadly dangling that remind us of the specific melancholia of deserted commercial premises. Untitled (Stalemate) is a chessboard hanging on the wall where the remaining pieces are screwed in and frozen in an eternal position of stalemate.

The two videos Untitled (You can cut anyone) and Untitled (Why your psychology sucks) have as a protagonist an actress specialised in promotional and advertising videos for companies, here she recites texts lifted from the messages of a controversial self-help guru, revolving around how to get rid of toxic people and how to get out of depression. The philosophy that constitutes the backbone of these instructions (half way through survival techniques, self-defence and wild individualism) is only oriented towards productivity and social Darwinism, but in a troubling way, it does contain a small dose of truth. Three works form a feminist constellation inside the exhibition: Untitled (We are all clitoridian women) is part of a series of works entitled We are all where the sentence that give the title to the work is painted on top of a faithful reproduction of one of Warhol’s iconic silkscreens of Marilyn Monroe. The work is conceived as a homage to Carla Lonzi that was the first one to theorize positively, outside of a pathological perspective, the concept of the clitoridian woman. Three Brickbats are inspired by three original editions of books published by Lonzi’s publishing house, Rivolta Femminile. The brickbats are sculptures made of bricks and scans of book covers whose spine has been modified to match the thickness of the brick – this makes all the petrified books the exact same size and the same weight. A brickbat is generally an object – often a stone – wrapped in a message of threat that is thrown through a window.

The light-box Untitled (pubblicità, pubblicità) is a quotation and a homage to French artist Philippe Thomas who in 1987, created the agency for the cession of rights of authorship and signature of artworks called Readymades belong to everyone. Pubblicità, pubblicità is a poster conceived by the artist as a promotion of his own disappearance as an author and the arrival of the buyers as new protagonists of art history. Claire Fontaine presents the reproduction of the original version on the side of its détournement that rewrites the text in a feminist key and presents the arrival of a liberated feminine singularity on the plane of art history – and history in general – as the only antidote to the problem of the ready-made subjectivity that surrounds us.