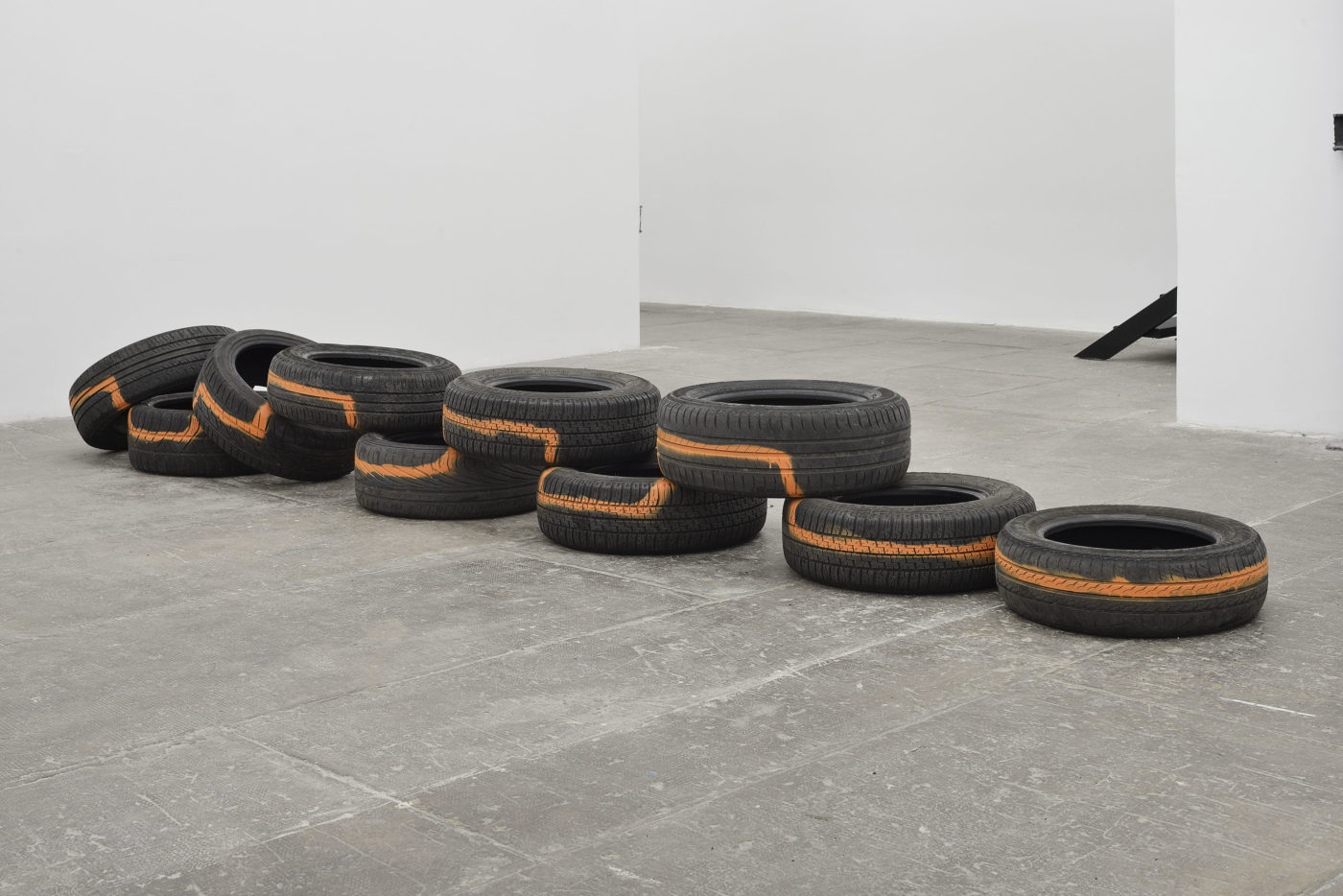 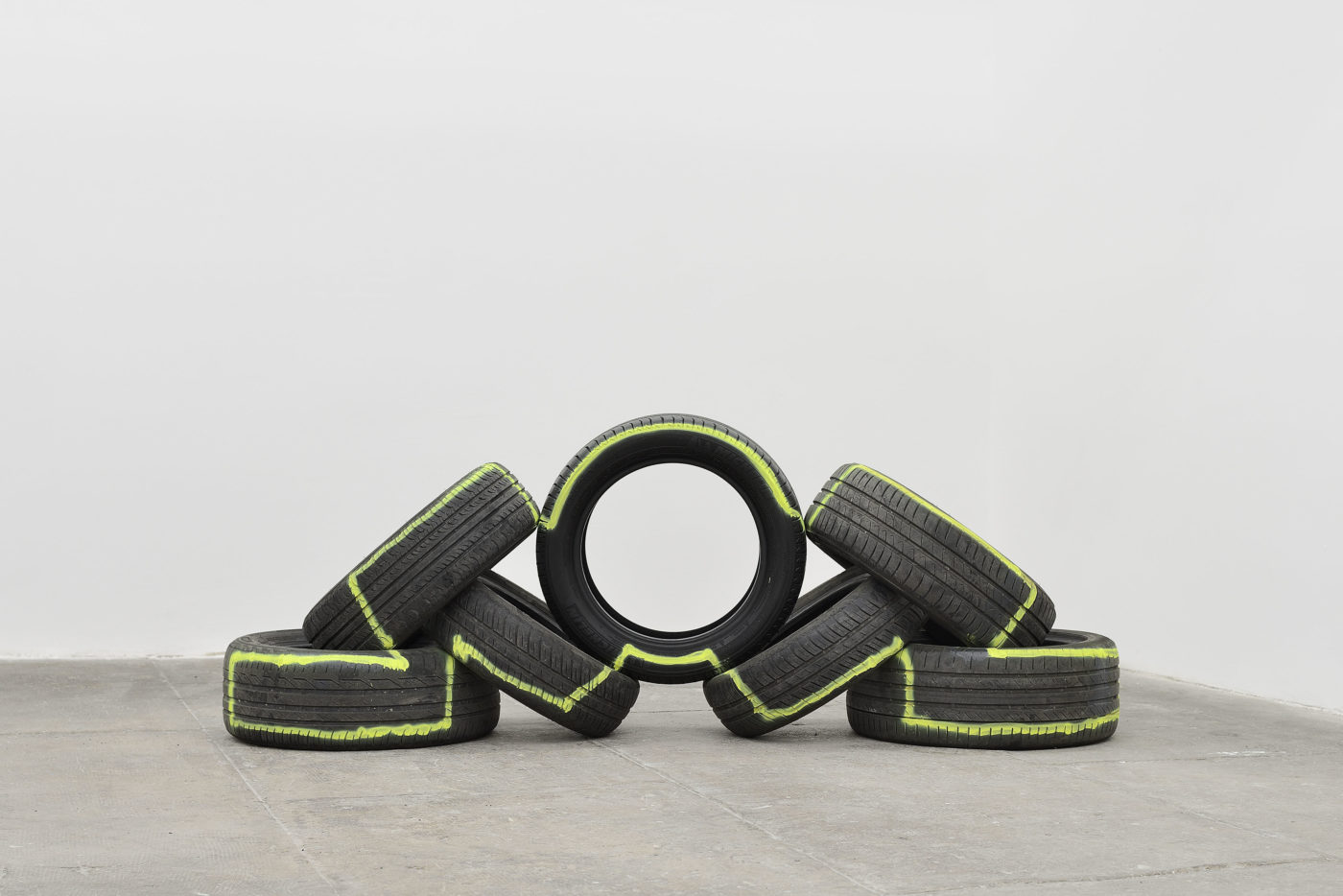 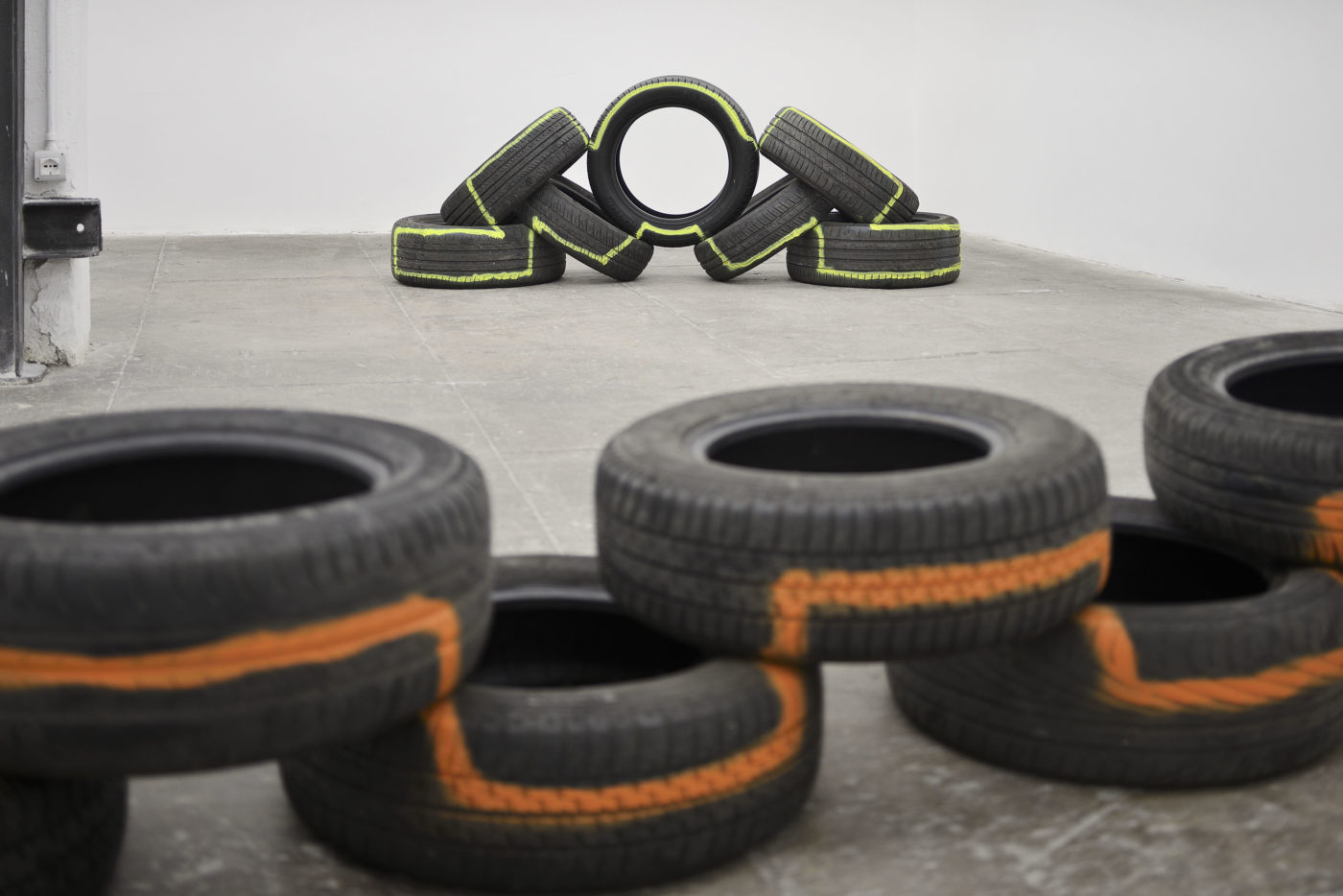 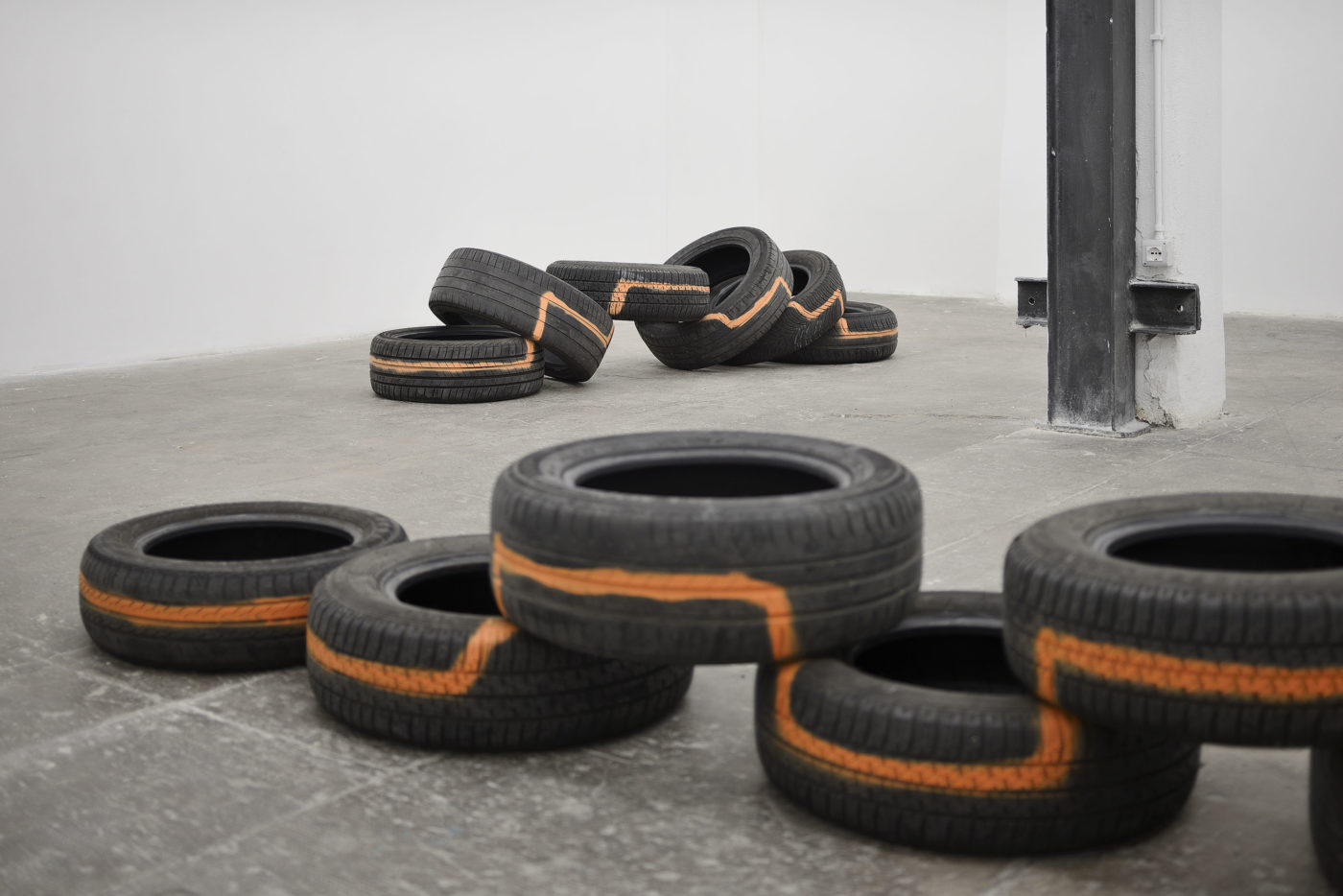 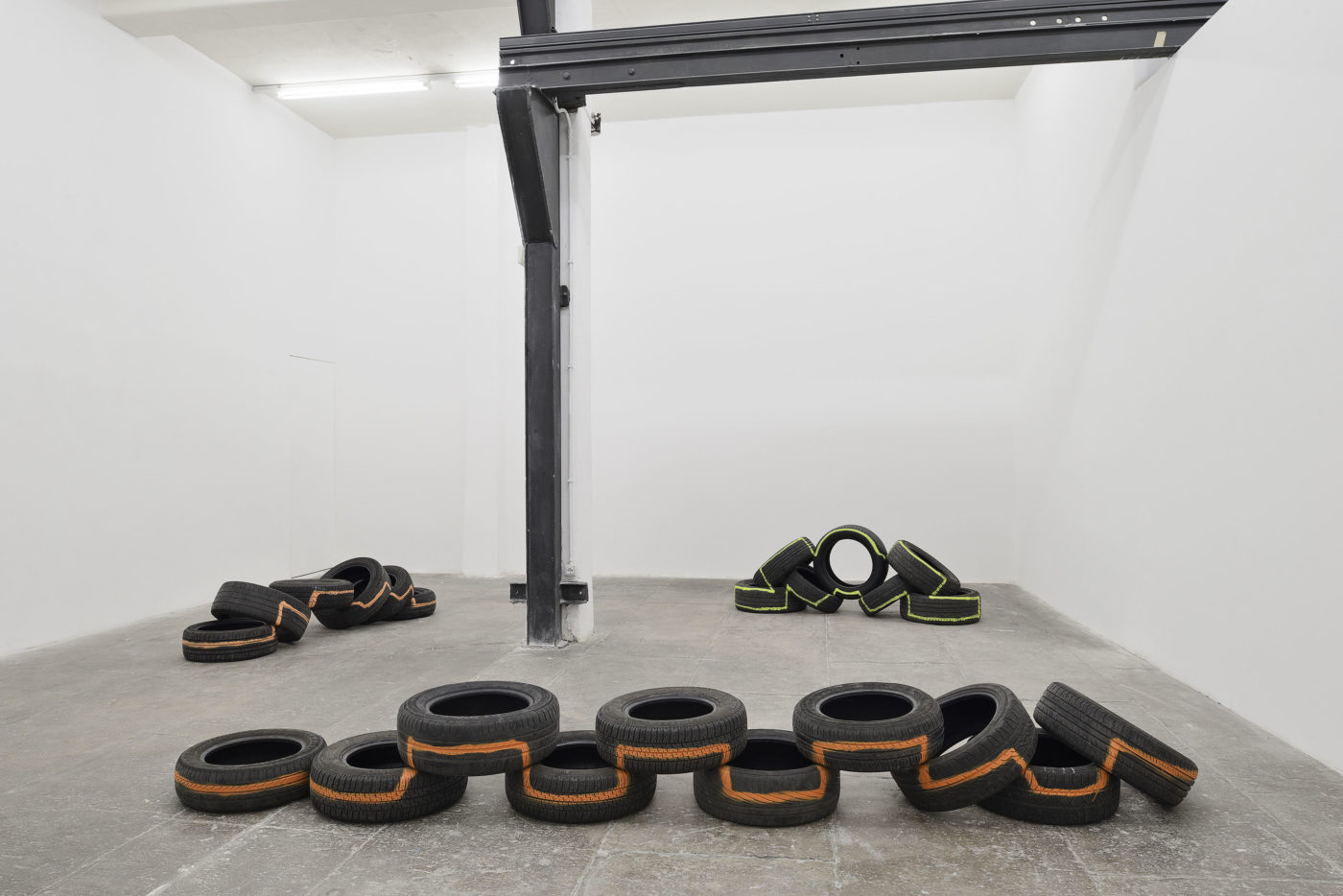 T293 will exhibit for the first time works by Edoardo Caimi, introducing his practice focused on the contrast between the modern and the primitive, the technological and the tribal, the consumerist society and nature, that creates an imaginary based on the short circuit between these two worlds.

The exhibition presents some installations consisting of tires which are marked with colored tags. These islands of found objects take the form of a barricade.
The gallery space turns into a safe habitat where the elements are transformed into new “graffiti”, traces of the passage of a human presence. These sculptures undergo a process of deterritorialization and reterritorialization, they become “monuments of the elsewhere”, and they bring along with them the characteristics of the place and its variation along with time and climate.

Caimi started his research when he was young. Exploring the nature around him became the mean through which he was confronting with life. He treasured the found objects by collecting them, and this aspect never left his practice. Simultaneously with the discovery of graffiti, the natural environment he was used to explore gradually left space to industrial spaces such as abandoned factories, or abandoned farmhouse in the countryside. His approach has always gone beyond the classic rules: at the beginning he was used to highlight stains on walls left by the attempt to erase other previous graffiti. By doing this his tags turned into abstract shapes. Later on, these outlines were transferred to found objects found in the place, so that the attention towards them became much more significant. The iconography of ruin, in the postmodern era, brings with it the signs of its past, by defining a stratification of time. It is an expression of the tensions between nature and structure.

Embracing the ‘survivalist’ theories, the buildings thus become a refuge from dystopian and post-apocalyptic scenarios, while the elements of the place are composed together to become barricades, improvised walls, and a shelter from these possible dangers.