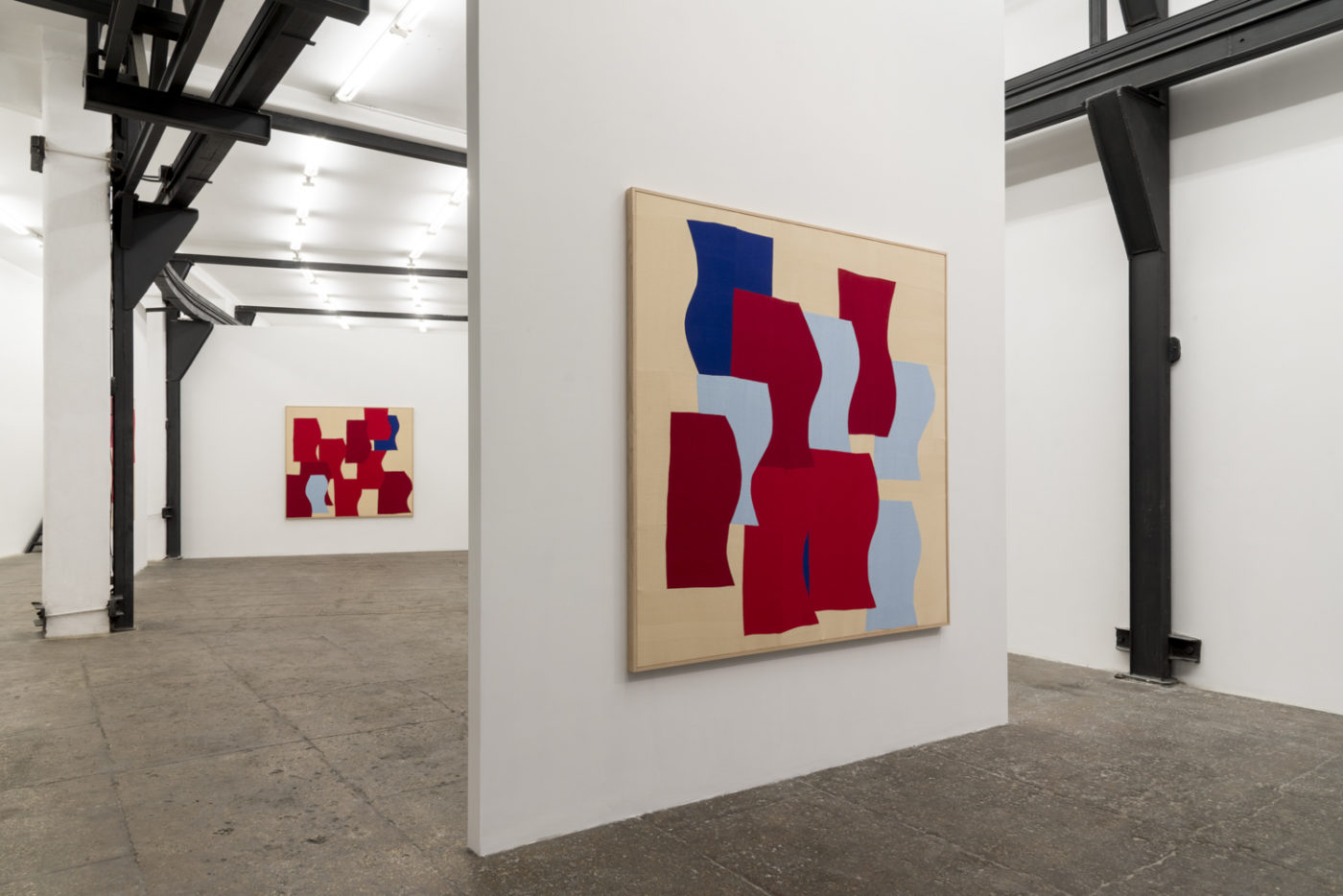 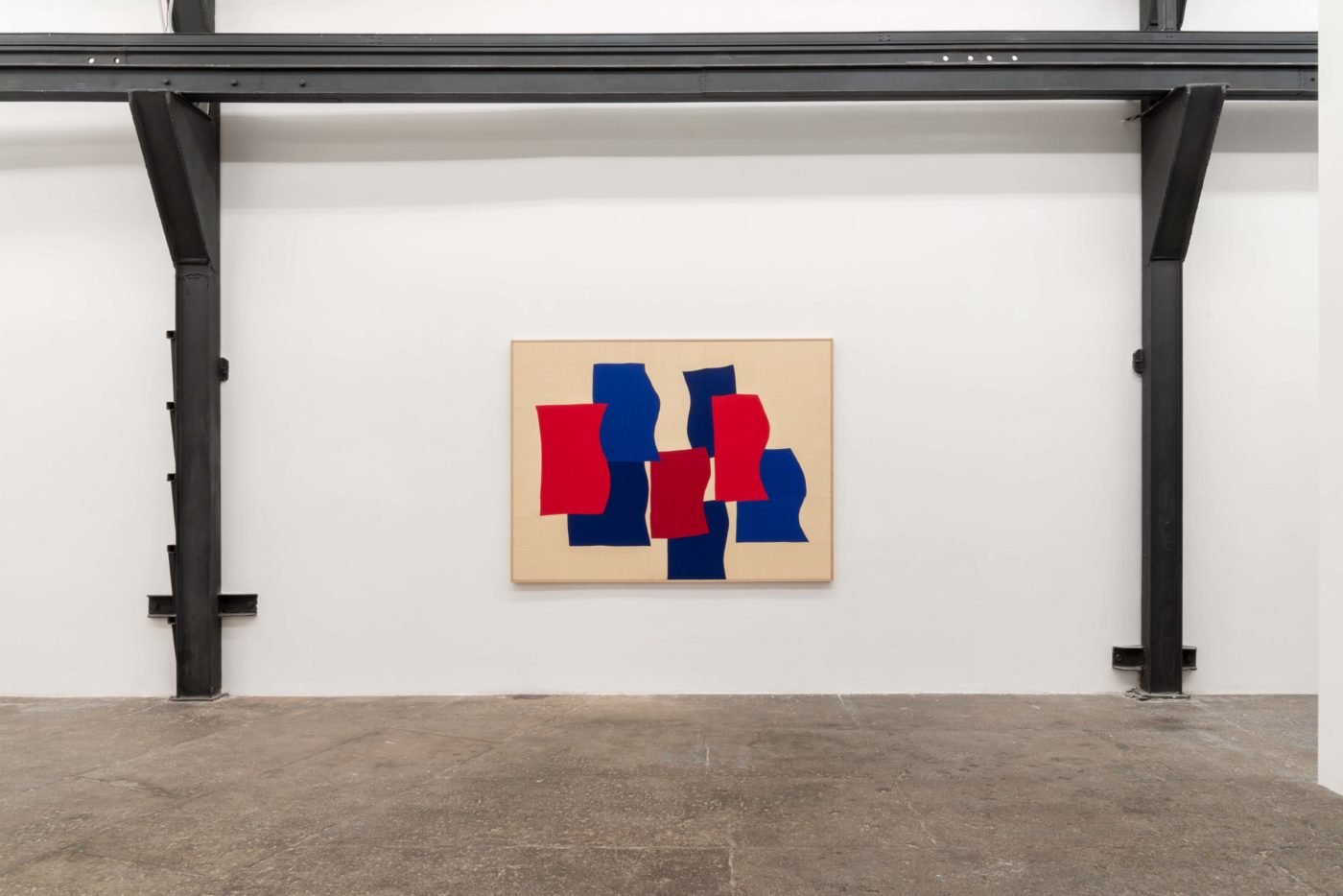 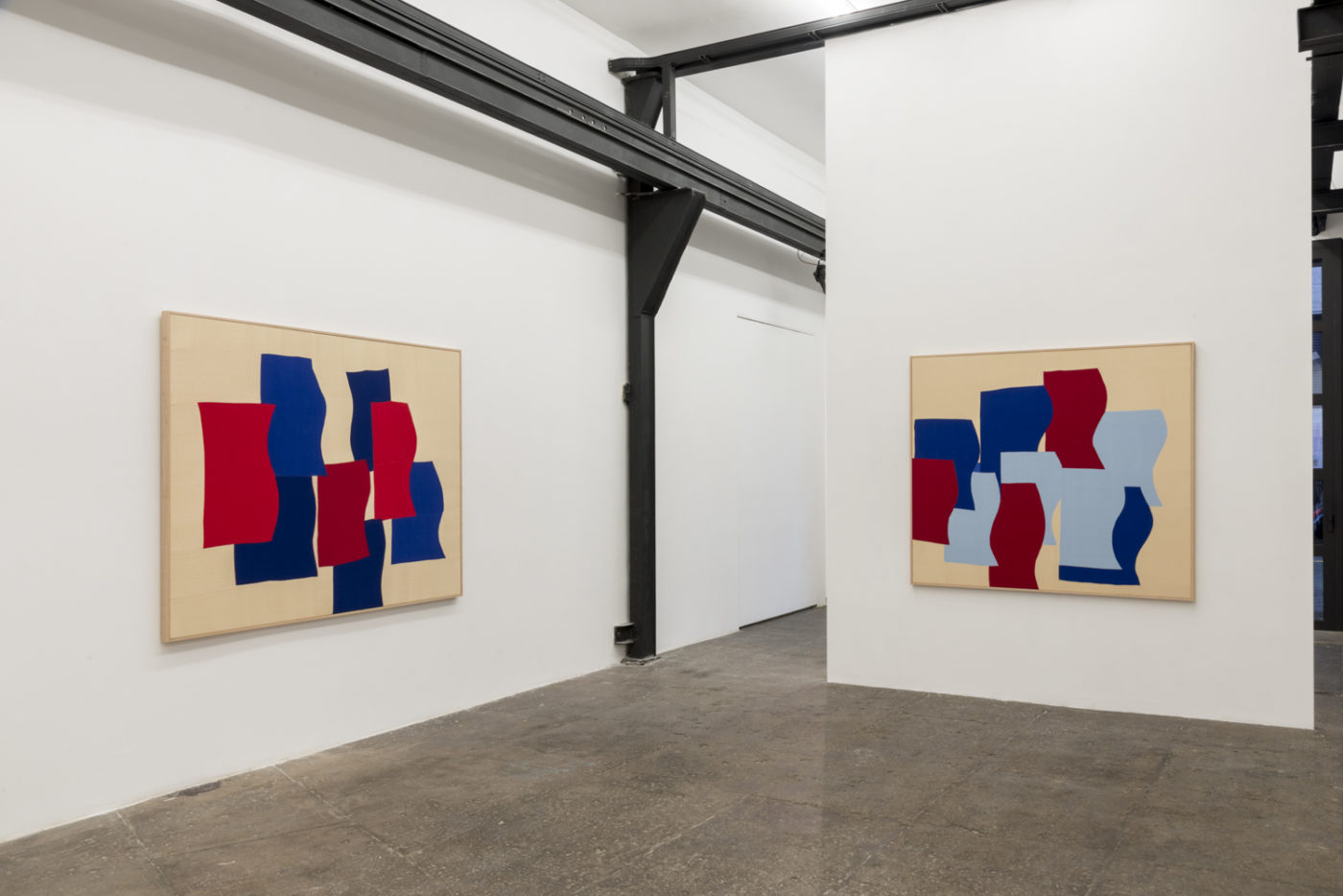 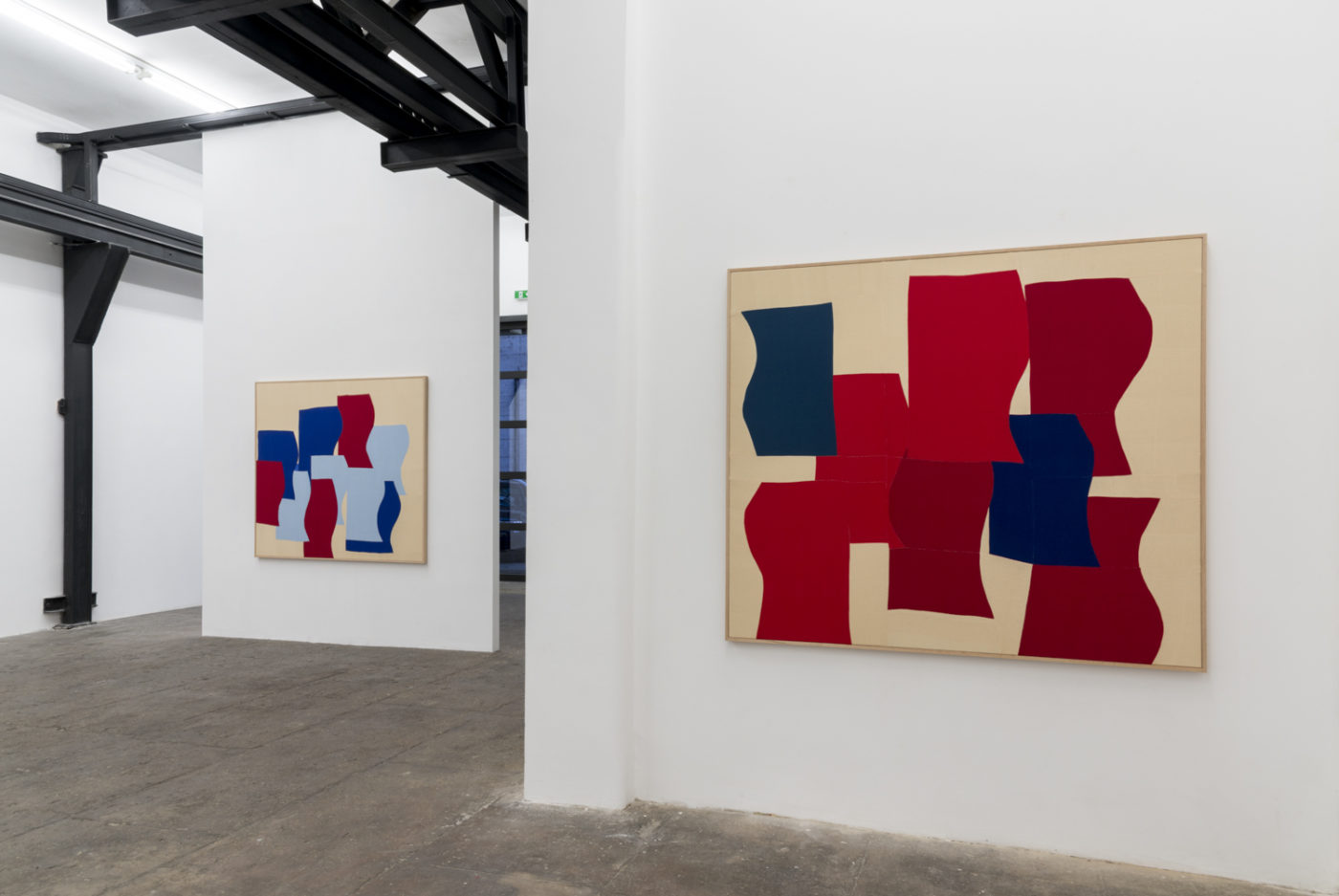 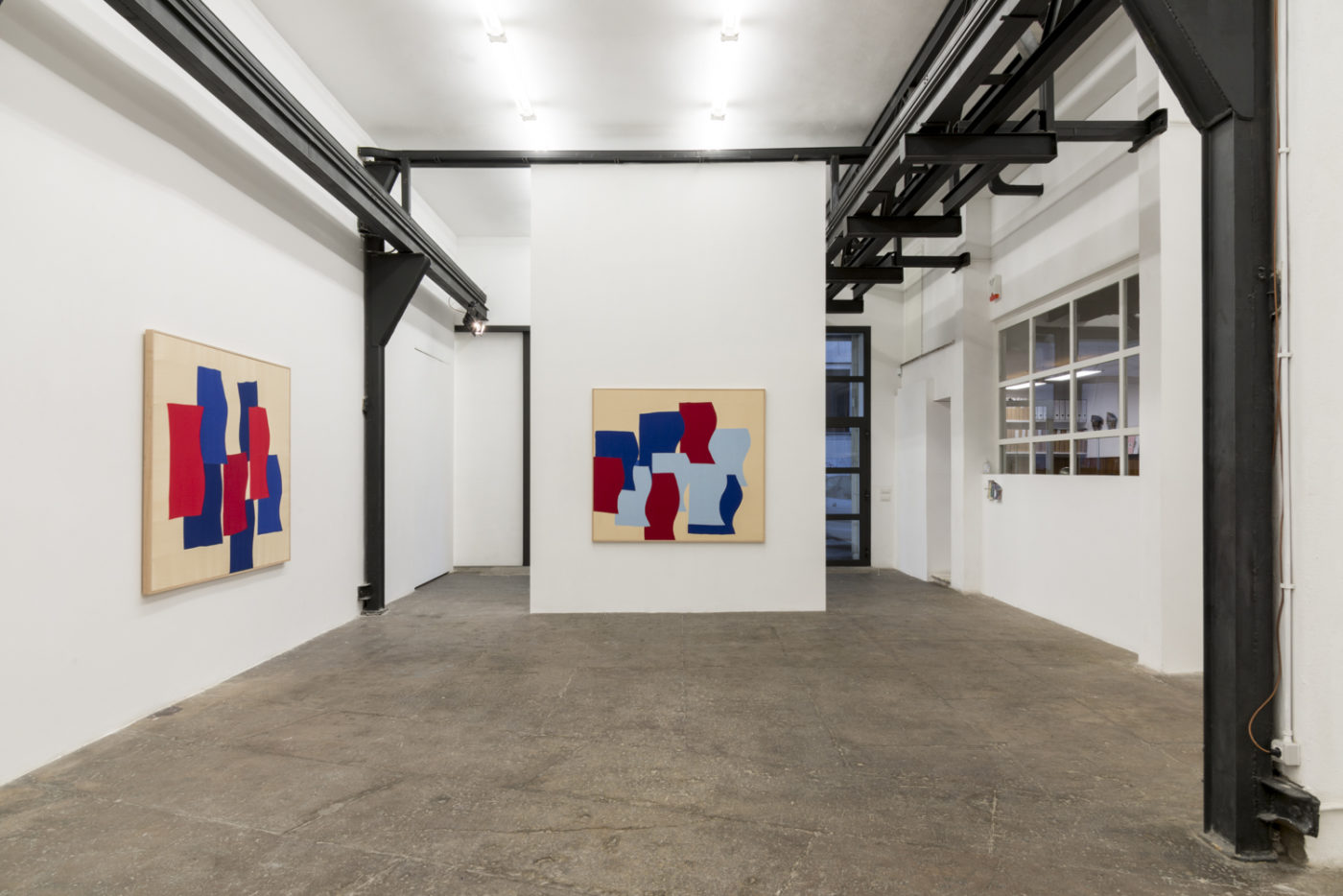 T293 is pleased to present Chimera, Ethan Cook’s third solo exhibition at the gallery, in which the New-York based artist shows a new series of large-scale hand-woven pieces.

Ethan Cook’s latest series sees the introduction of curved shapes into the compositions. Widely known for his abstract, color field canvas in which horizontal and vertical lines dictated the arrangements of the pieces, Cook widens his artistic approach by adding organically shaped forms, rhythmically organized into the canvas. The color blocks which previously were always attached to the borders of the works, now move freely inside the composition, as if they had achieved independence after a long period of meditation.

For Chimera, Cook mainly plays with the combination of different shades of blue and red, focusing his attention on the intersection, juxtaposition and combination of these shapes and the effect this colorful dance has on the viewers. The ensemble of the pieces on the main space of the gallery and the electric rhythm of these shapes feels like a ballad of concrete forms: moving loosely from one piece to the other, the different shades of red take over its own materiality and resonates inside the canvas, electrifying the gallery environment. Simultaneously, the variety of blues equilibrates the space, attributing on its behalf, a contrasting still counterpoint.

On the adjacent room of the gallery, another series of new three works creates an alternative ambience, which contributes to underline, on the other hand, the harmony inherent in the compositions, this time exempt of hard contrasts. Mainly composed by various shades of green, violet and yellow, we enter a whole new sphere of sensation, which contrasts the vibrancy on display on the other room and proposes a calmer atmosphere instead.

Cook continues his research on material existentialism, constructing color itself through his handmade process of weaving the canvas. Through a labor-intense practice, the artist gives shape to abstract compositions in which, although thoughtfully arranged, the imperfections of the handwork can still be experienced, implying the fundamental differences between humans and machines. Furthermore, by turning the canvas into an artwork itself, instead of a mere supportive base of the work, the artist proposes an alternative perspective on how abstract artworks should be conceived and received, questioning how contemporaneity deals with questions such as object-subject matter and opening a new dialogue with his viewers.