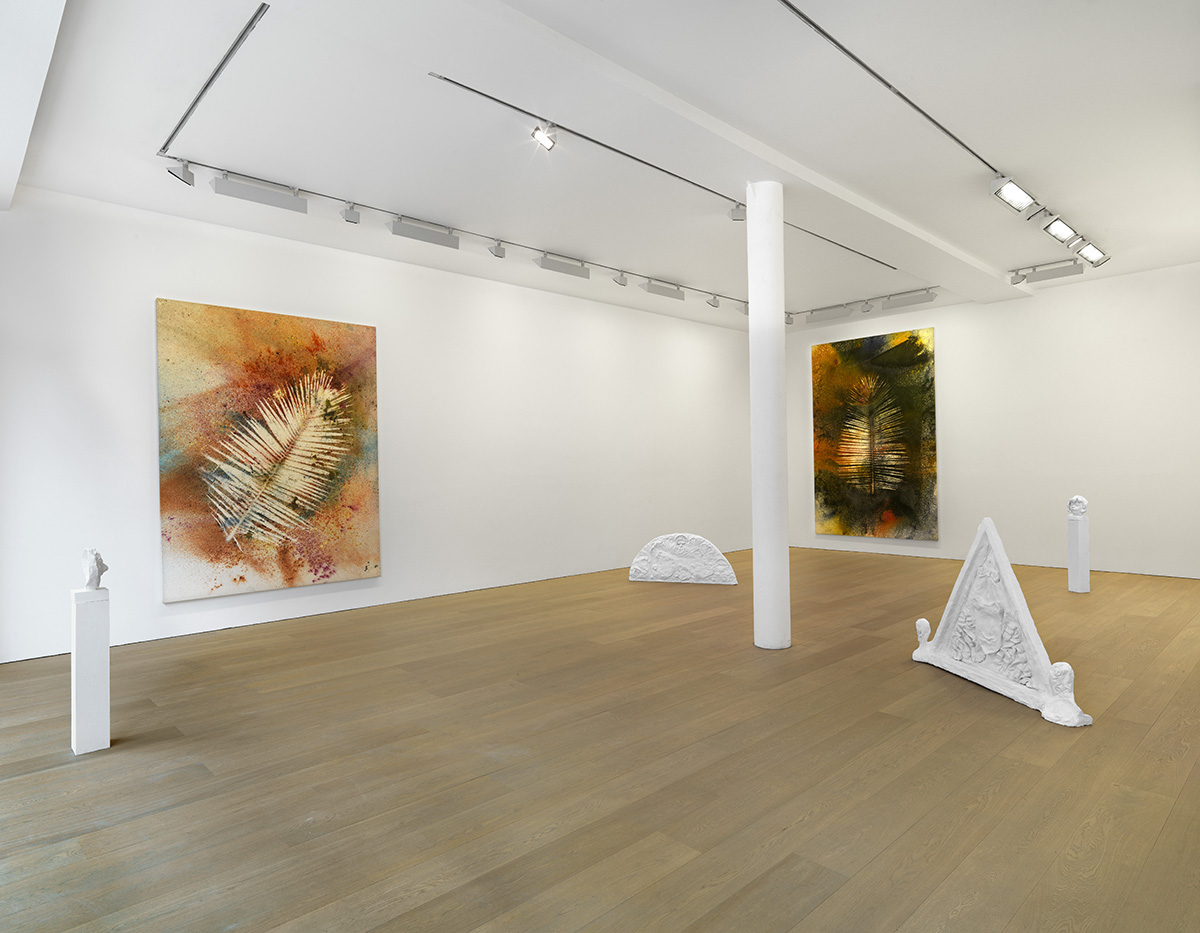 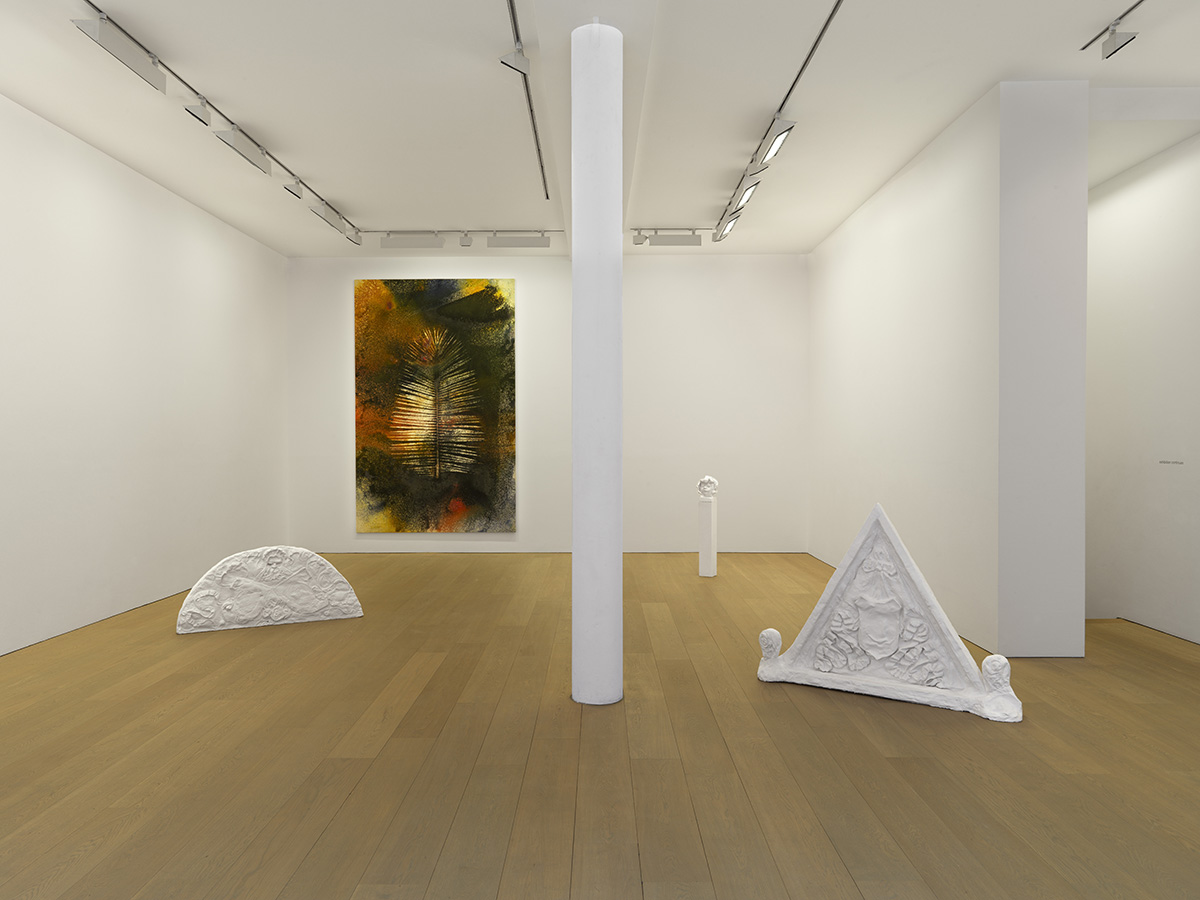 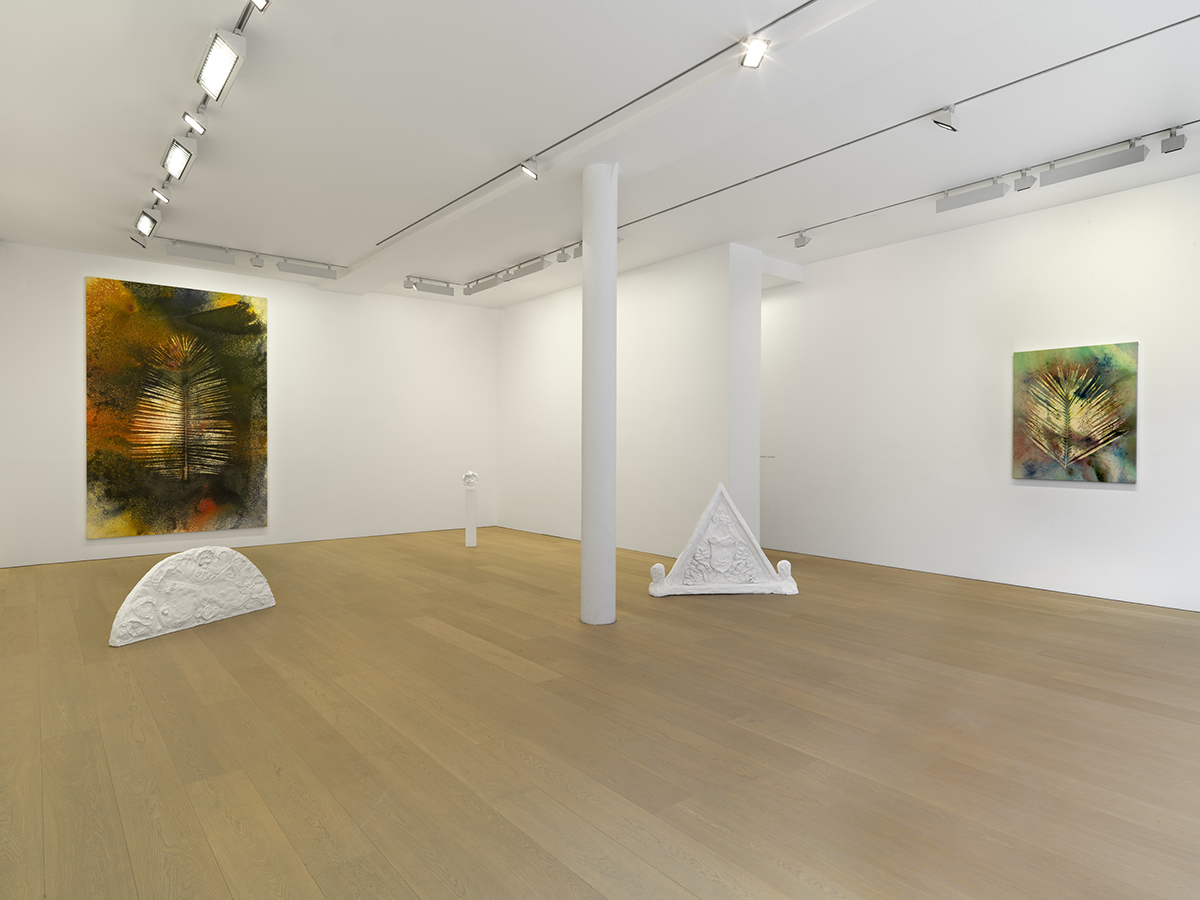 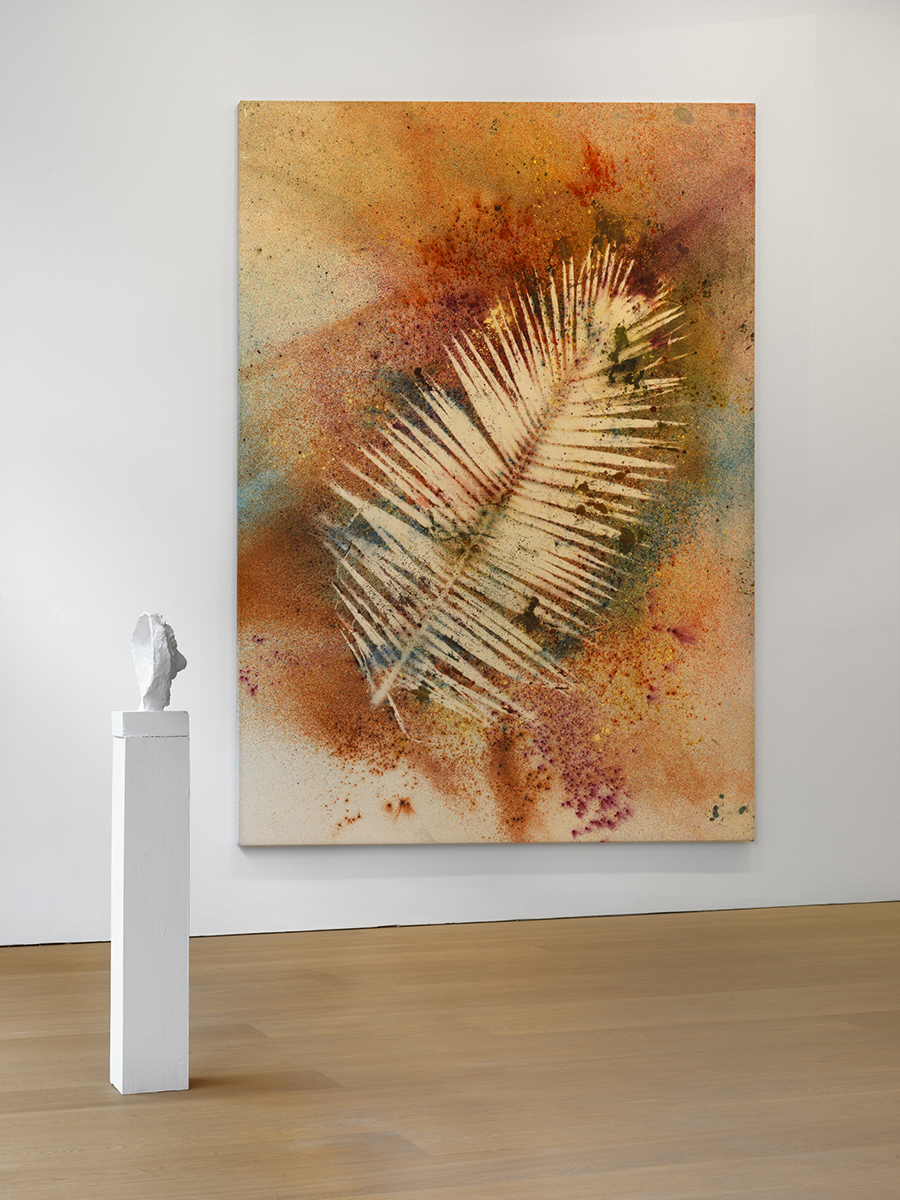 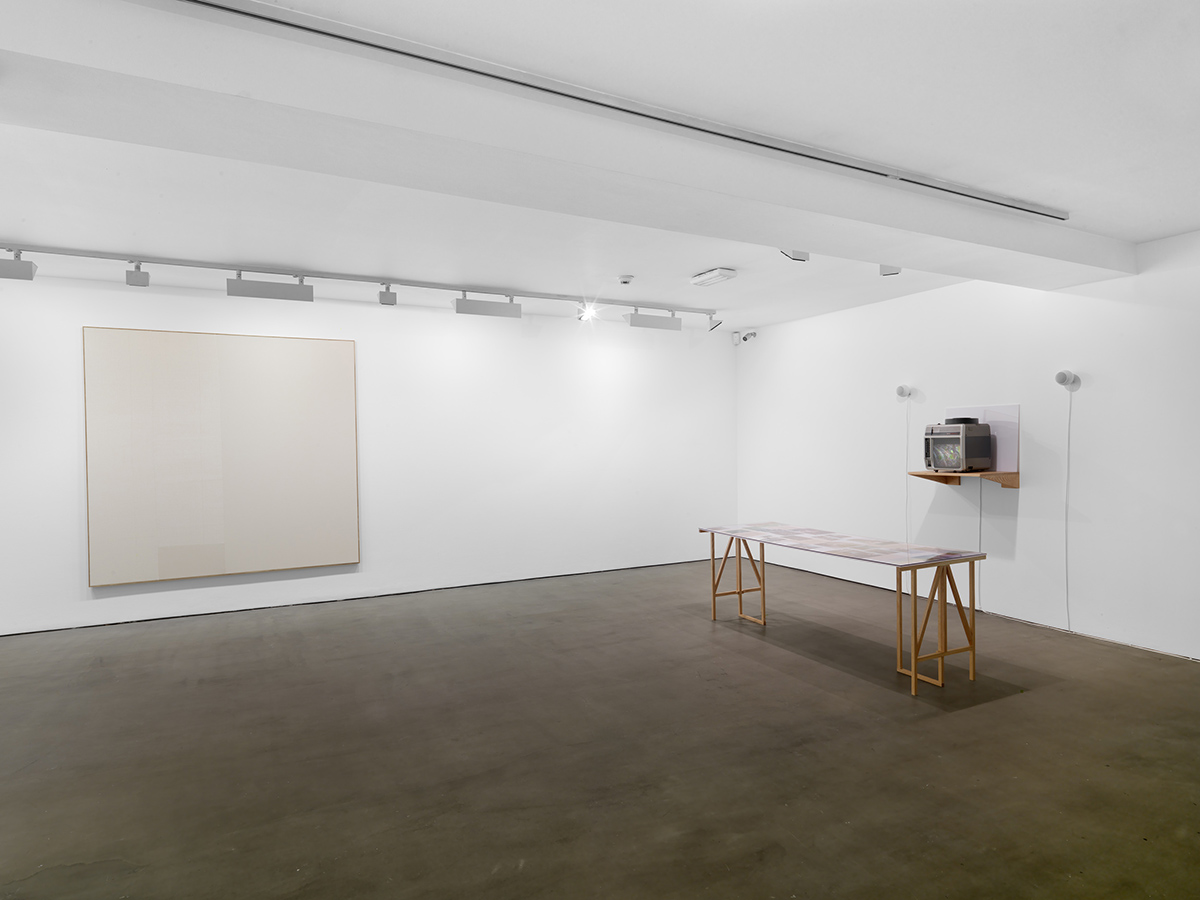 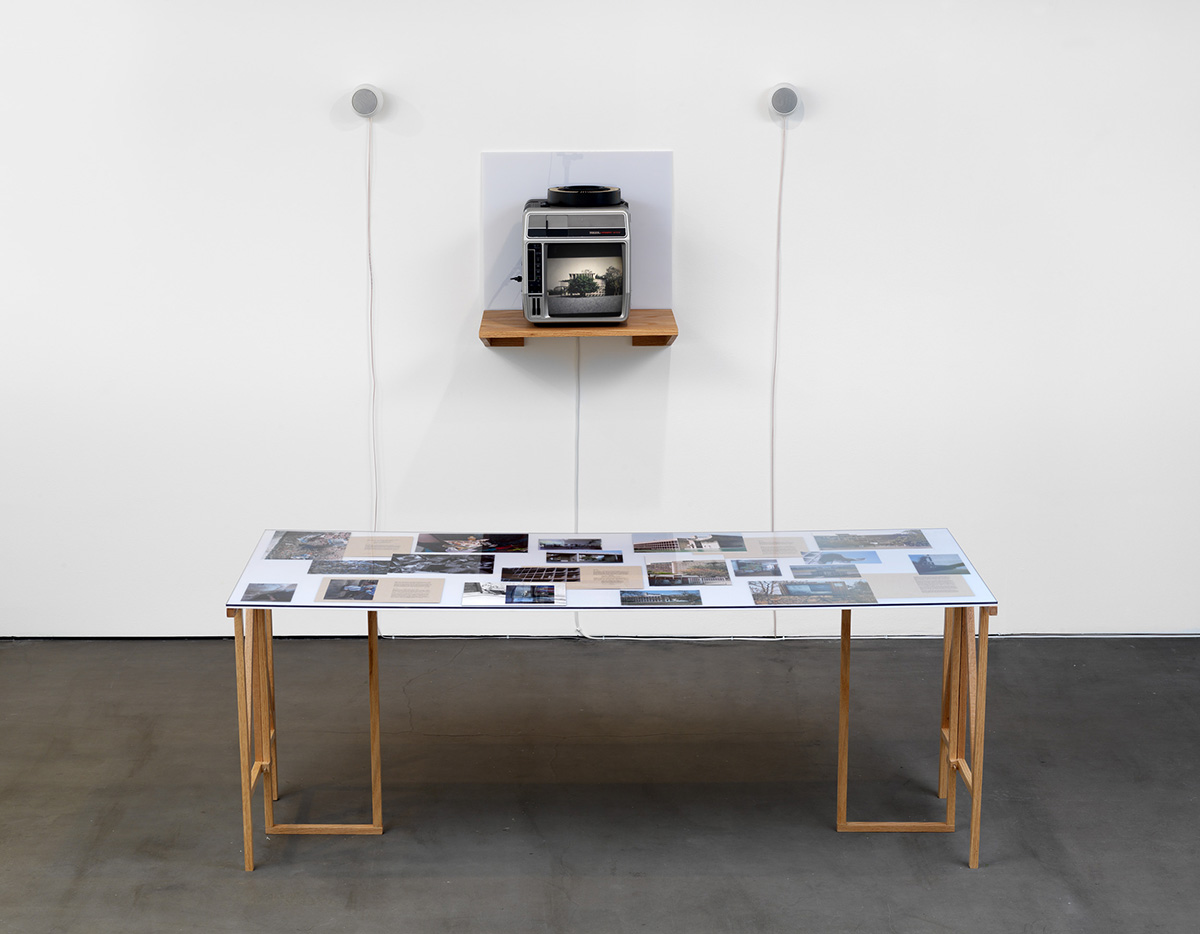 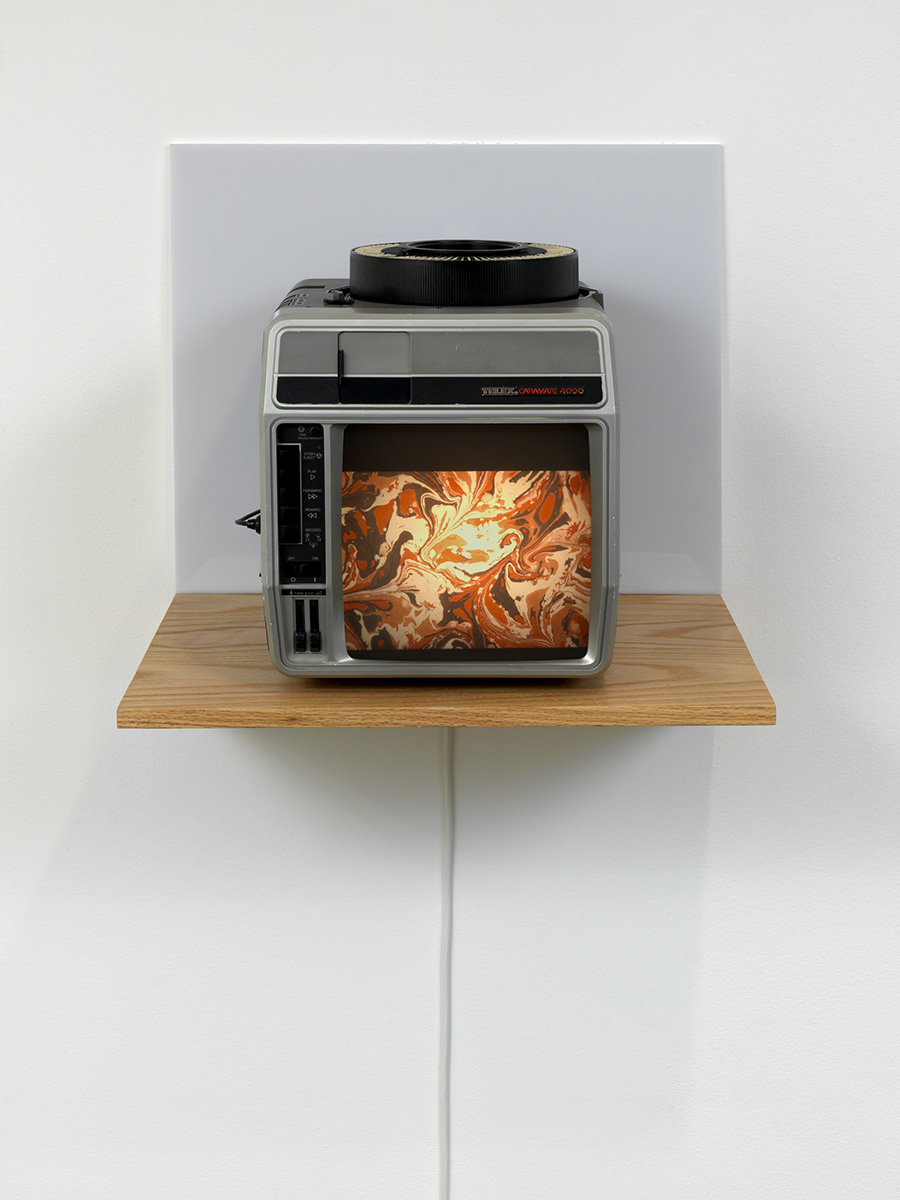 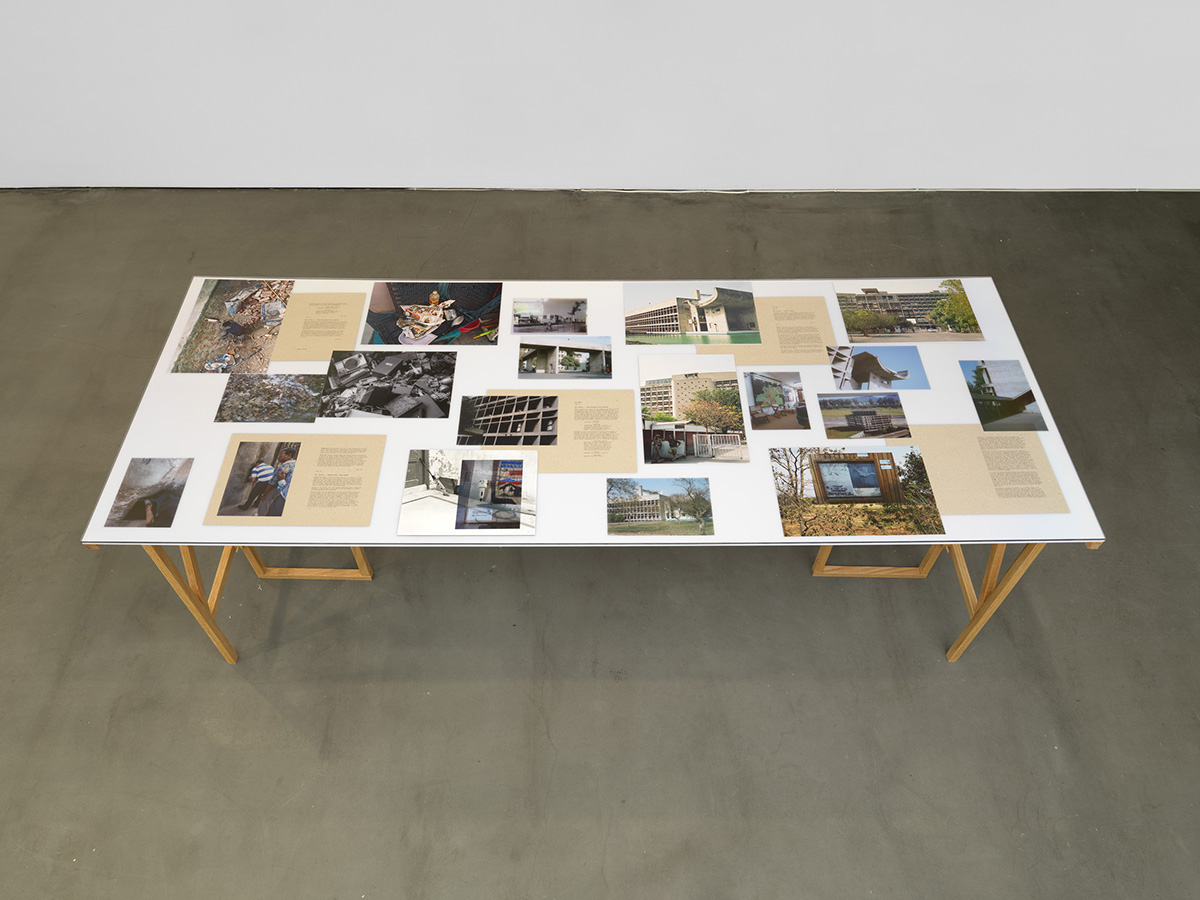 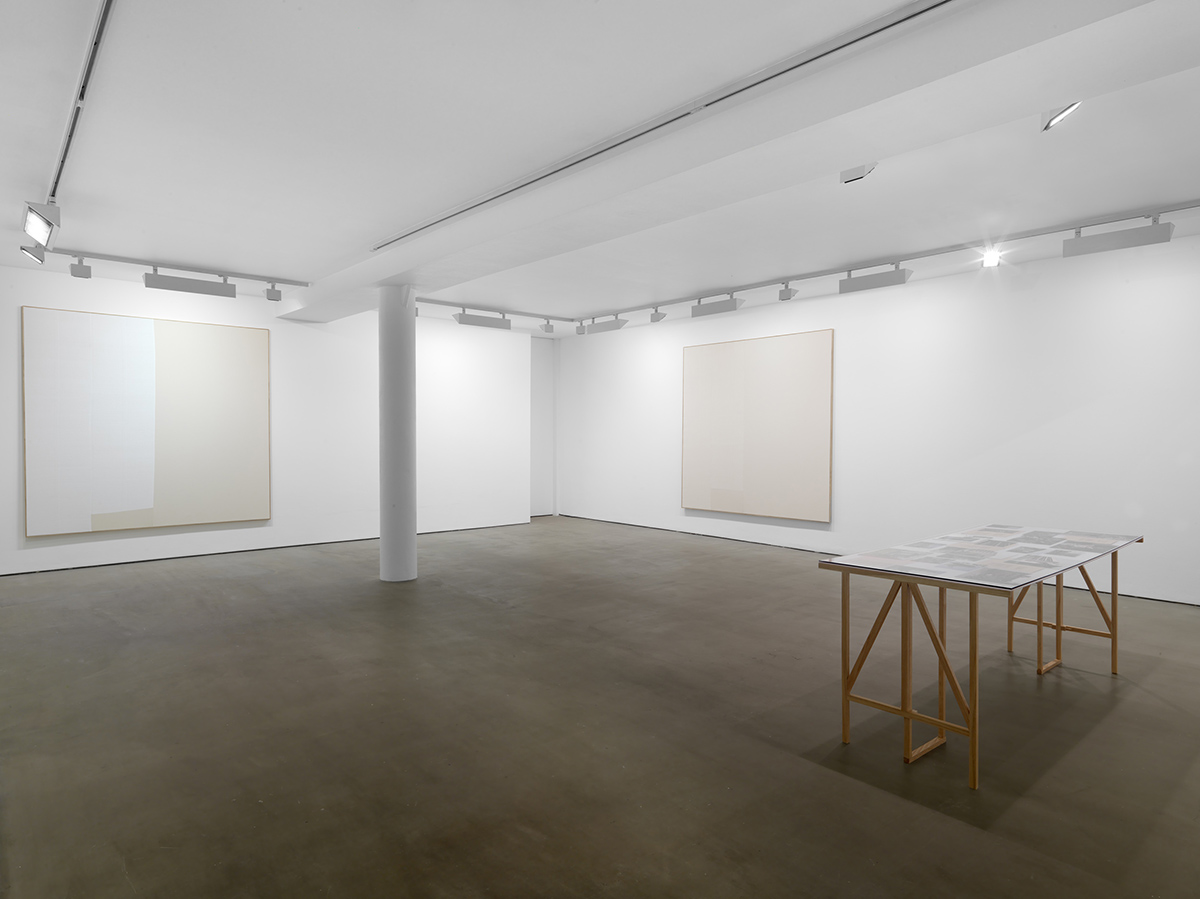 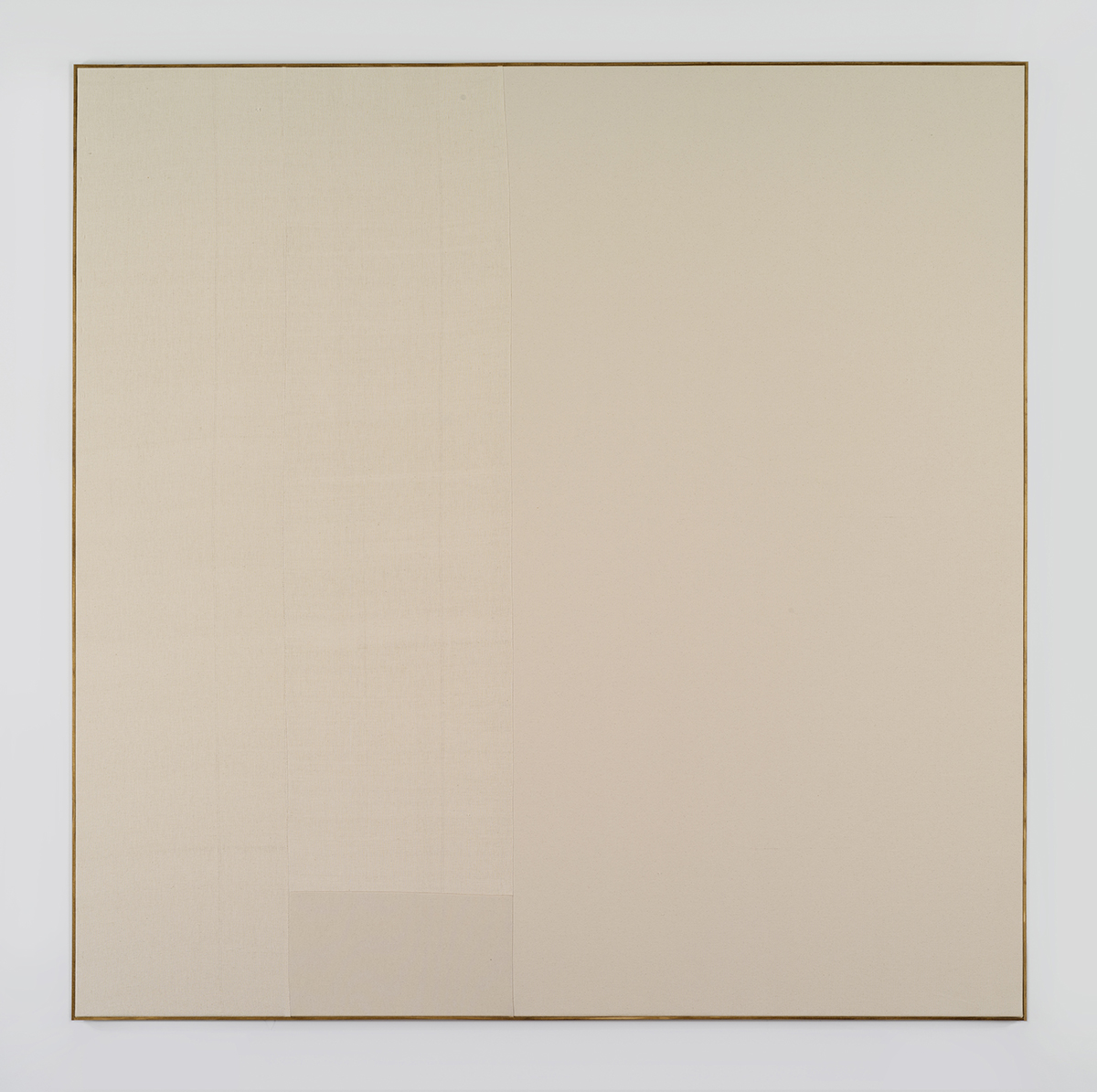 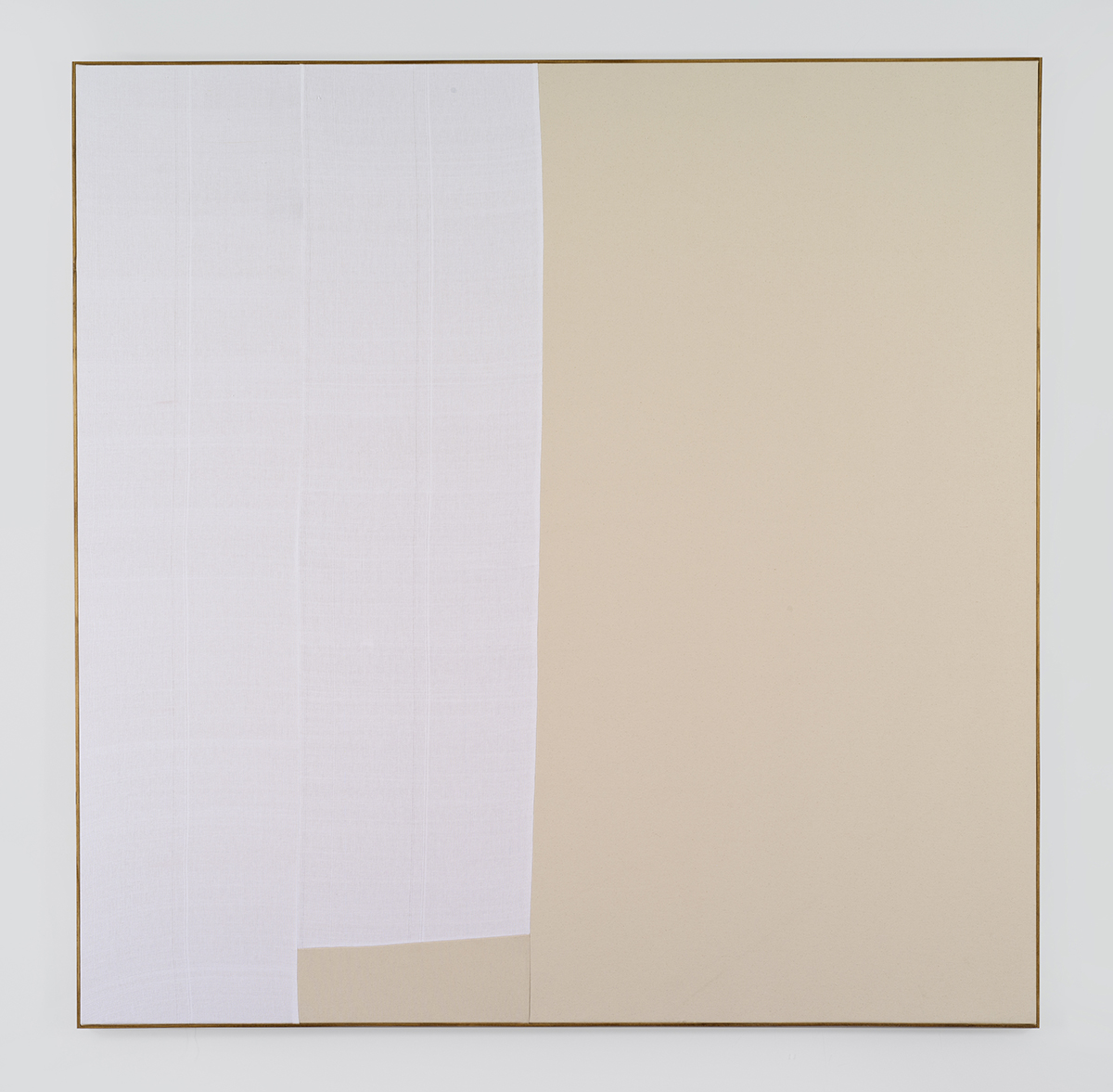 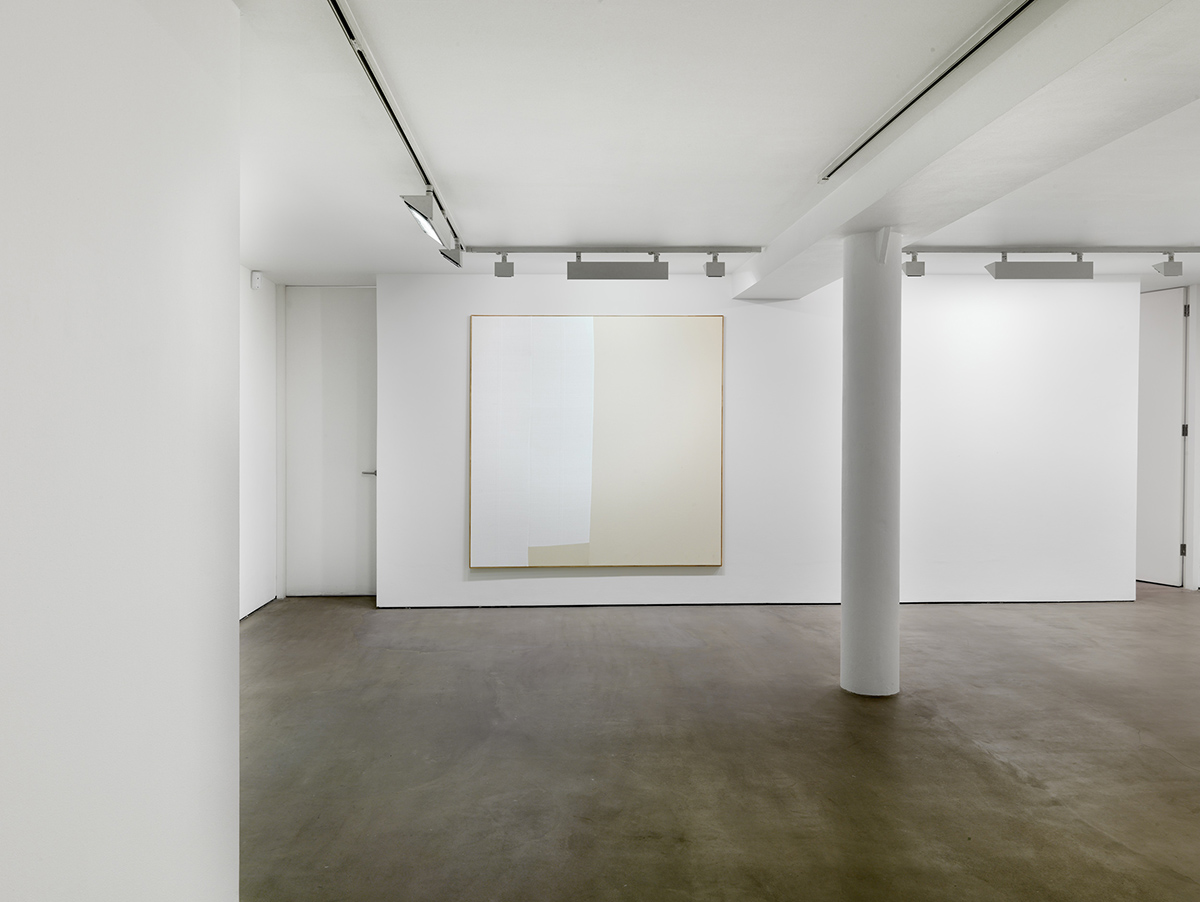 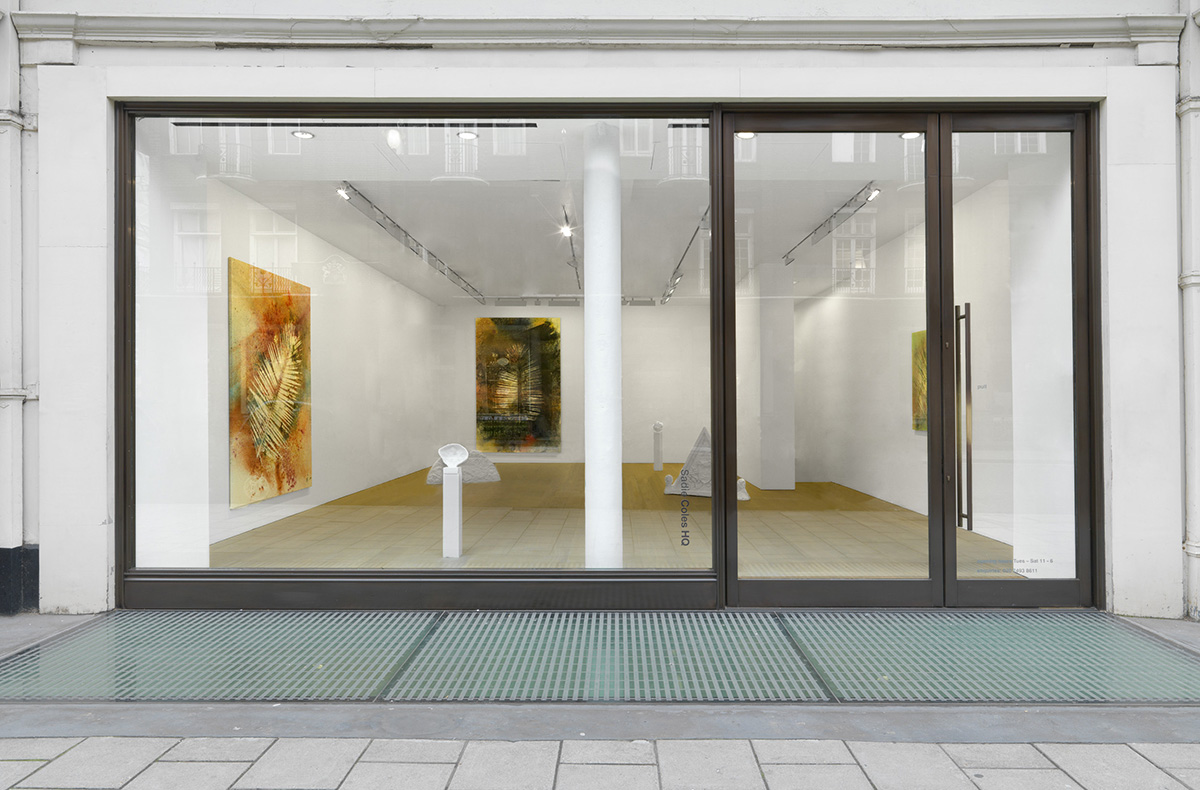 Along the interval between two locations and during the time spent to cover that distance, from one place to another, from an origin to an endpoint, the aesthetic features one is surrounded by will always and inevitably change and be changed by circumstances. The perception of them will define one’s own subjective realm, one’s personal image.

Sadie Coles’ 69 South Audley Street space will be home to Rome and Naples-based T293 for a month-long gallery residency where all exhibited artworks bear witness of some kind of displacement, dislocation of elements undergoing processes that transform them into something new.

Natural elements, time, and geography play a key role in the work of Sam Falls. The palm works in this show are born of his continued interest in expanding the mechanized field of photography and printmaking with the organic nature of painting, where rain acts as a catalyst for water-based pigments which dye the canvas around the palm frond, leaving an indexical image. Exposed outdoors, these works not only hold an image of the palm frond, but also of a specific moment in time. The palm describes a plant, but also a place. The rain describes an action, as well as duration.

What one would expect to be the less movable of elements, also make a journey in  Emanuel Röhss’ work. Architectural ornaments and features of buildings in his native town Stockholm are extracted and re-presented in the gallery space as products of his ongoing enquiry into culture specific languages configured within built environments. By displacing all chosen fragments and homogenising their materiality, the aim is to alter the point of view of their countenance and the perception that a viewer can have of them, drawing a more direct attention to their existence as pure form.

Tris Vonna-Michell’s works are instigated by how the perception of historical material is affected by the conditions of the present. As context-specific iterations he uses spoken word, sound compositions and photography to stage his narrative installations. The ongoing work Capitol Complex evolves around a manuscript, set in the Indian city of Chandigarh, which serves as an underlining blueprint. Traveller, the protagonist, extends his leisurely strolls to navigating the city by night in order to induce an experience of greater intensity and anxiety of its modernist architecture. But urban fixtures of obstruction, surveillance and derailment direct his passages, until a shift in perception occurs.

There is no physical displacement, but everything happens within the canvas limits, in Ethan Cook’s hand woven canvas works. His practice is not an exploration of weaving or an engagement with textiles, but rather a rigorous investigation of canvas itself: its construction, its constitution, its inherent qualities and aesthetic potential, all viewed through the scope of a painterly practice. In these works, rather than using outside materials to alter the constitution of a given canvas, the artist looks at the surface itself as his medium, its inherent traits as his formal language, the process of its fabrication as his subject, equating the origin with the endpoint.