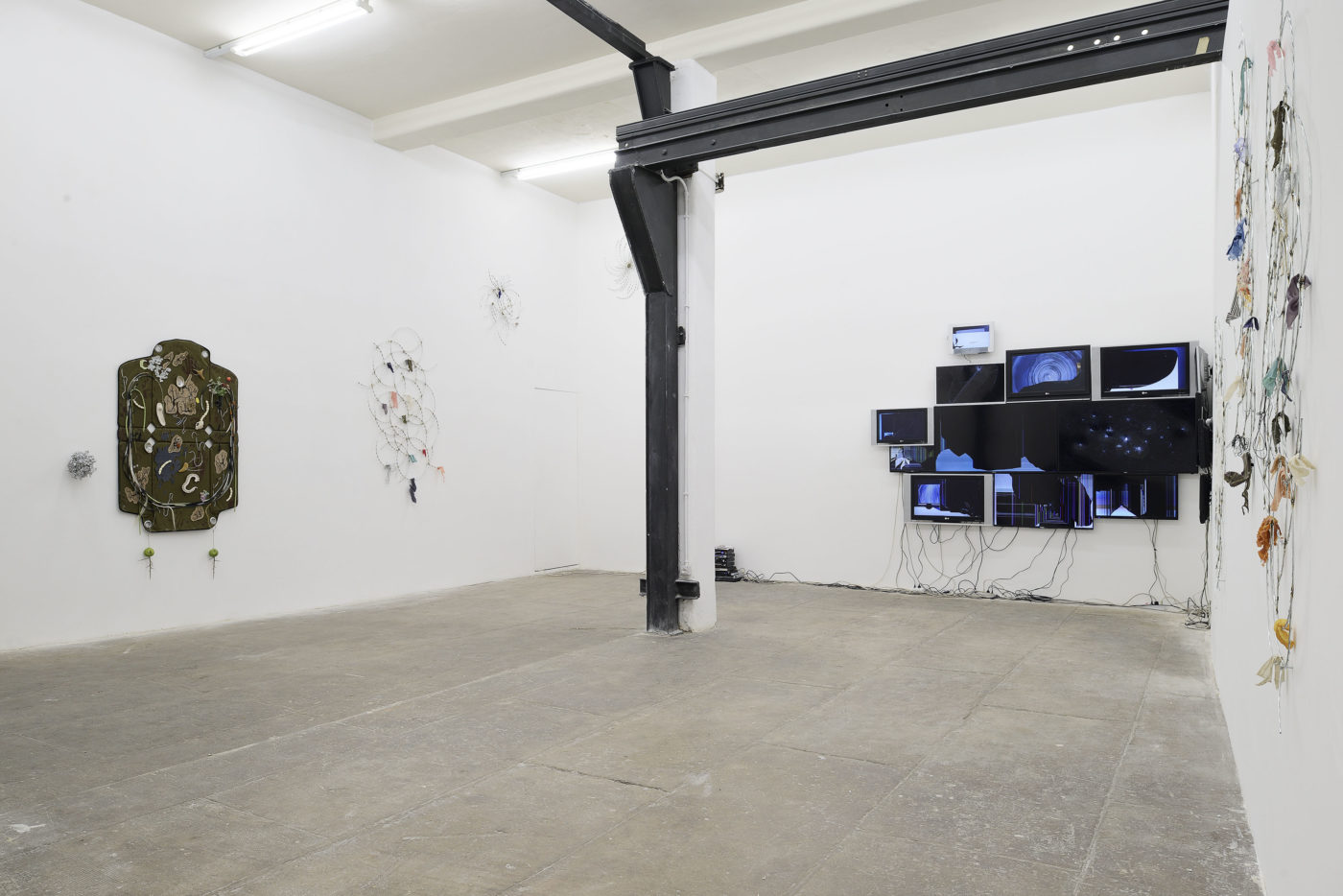 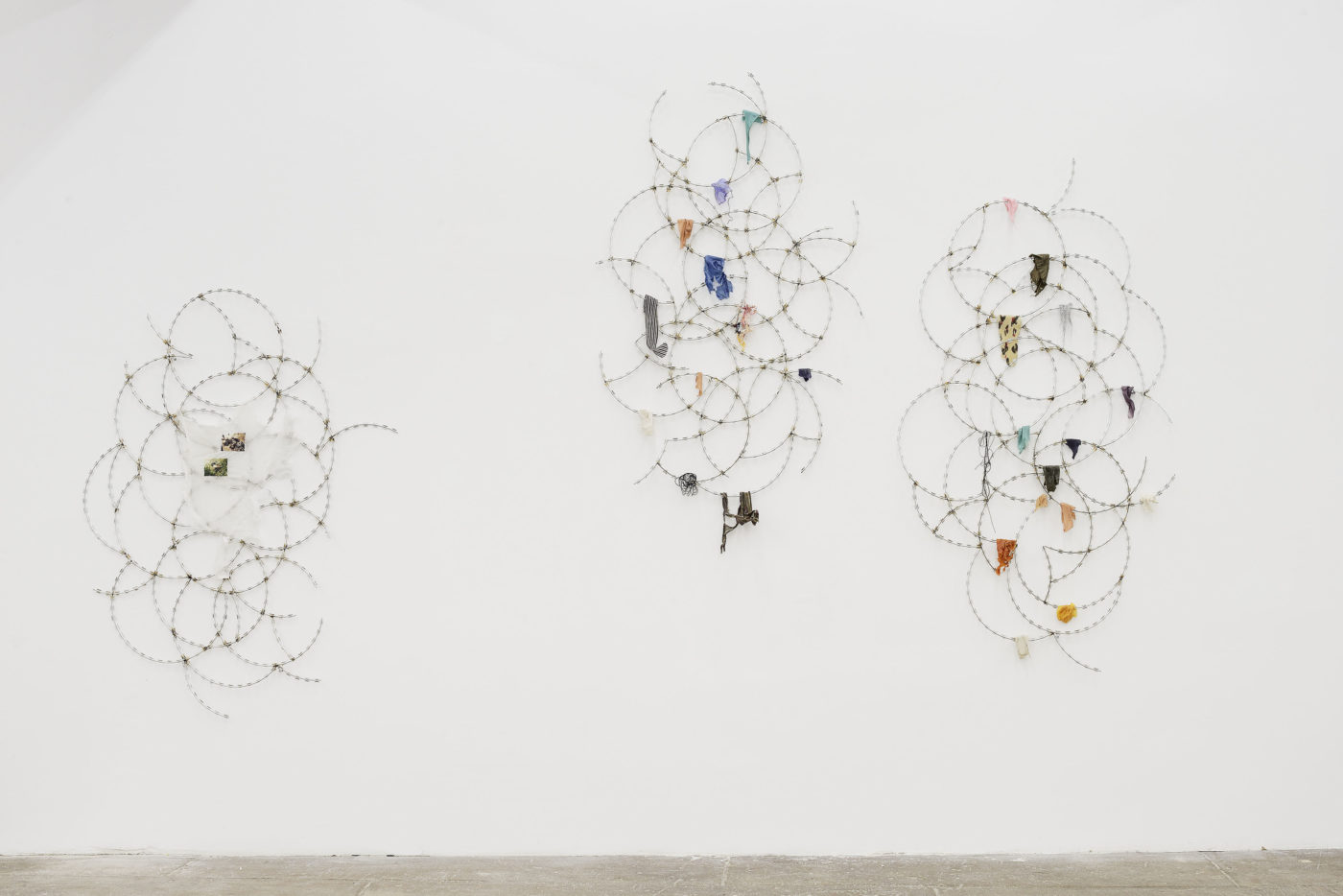 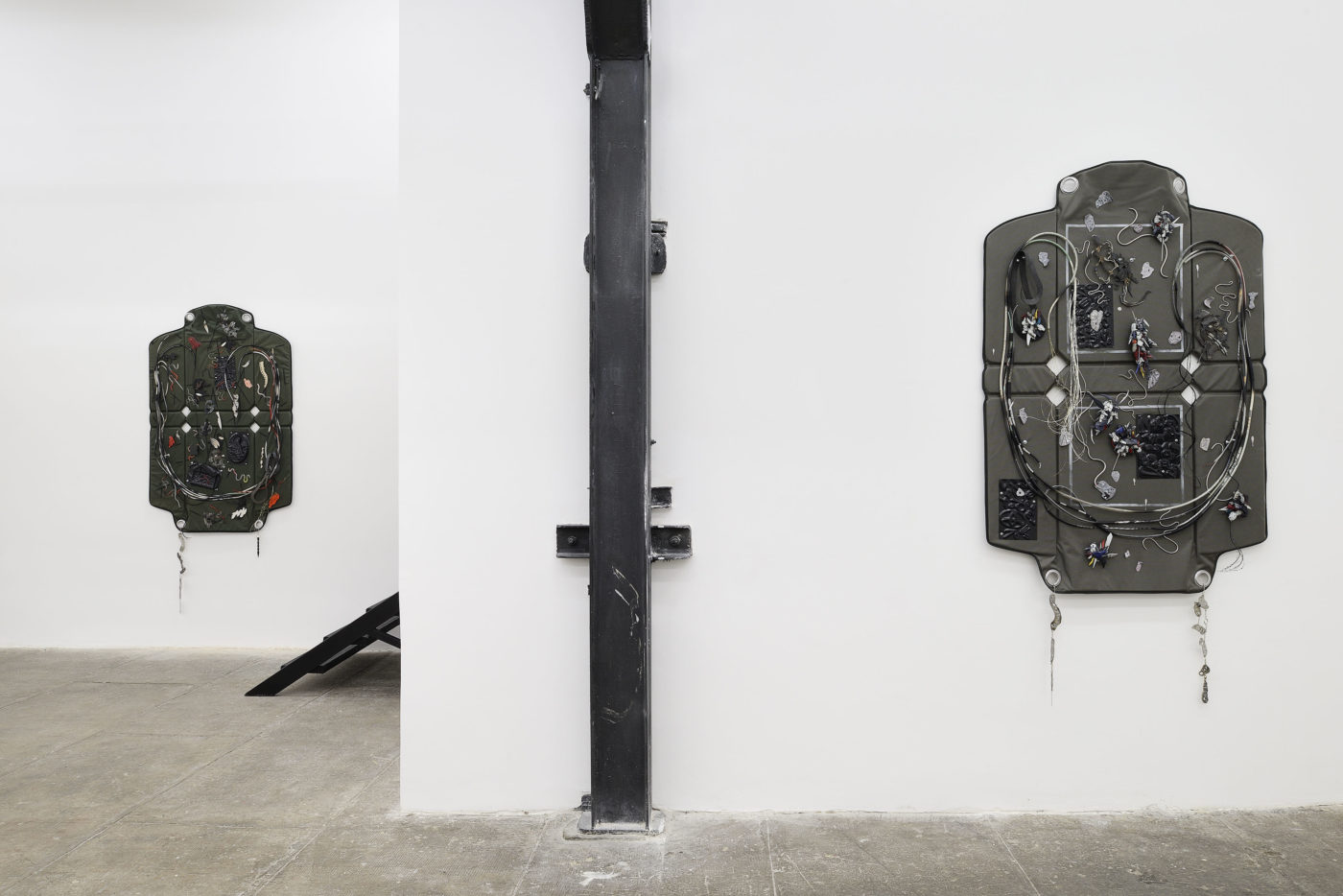 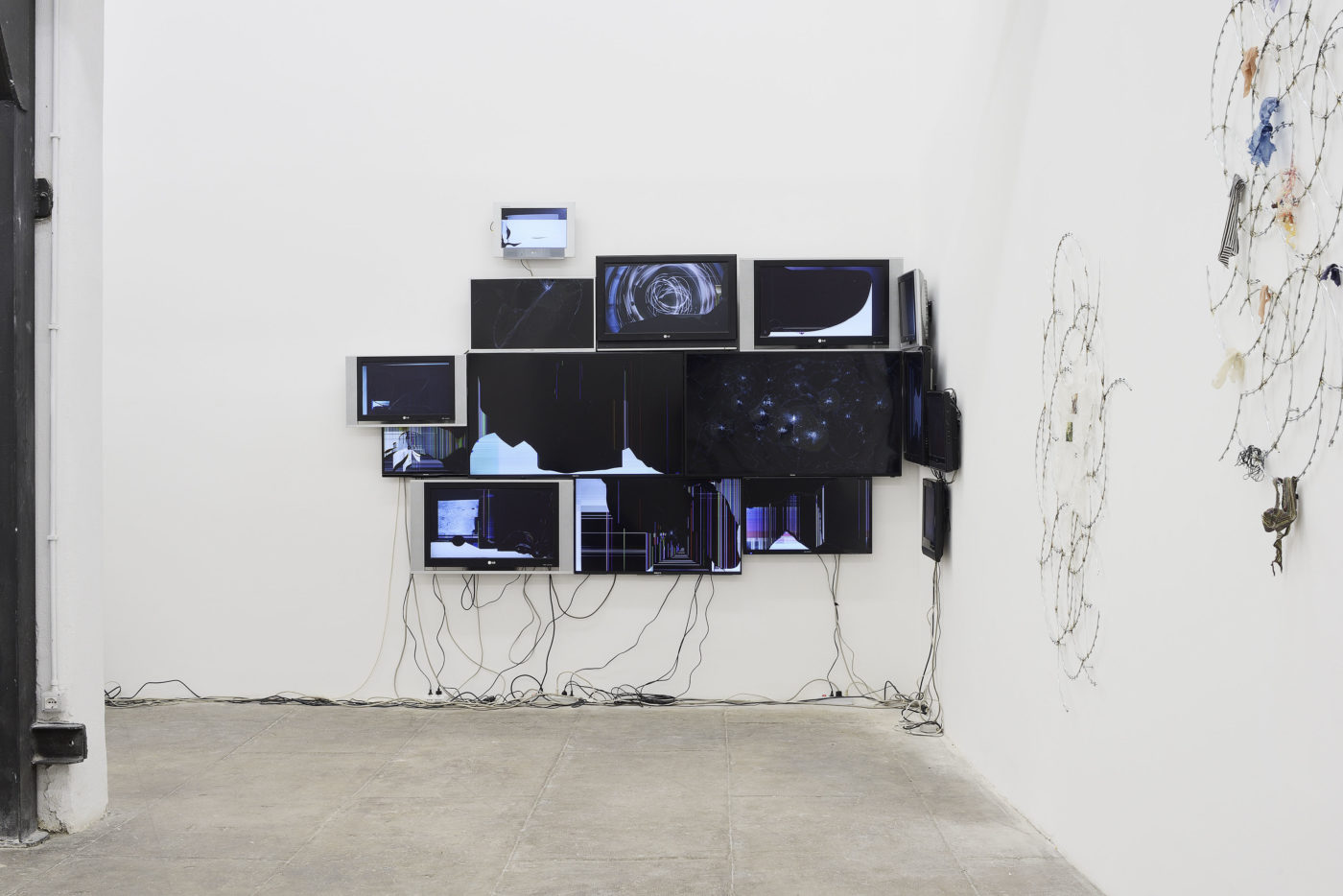 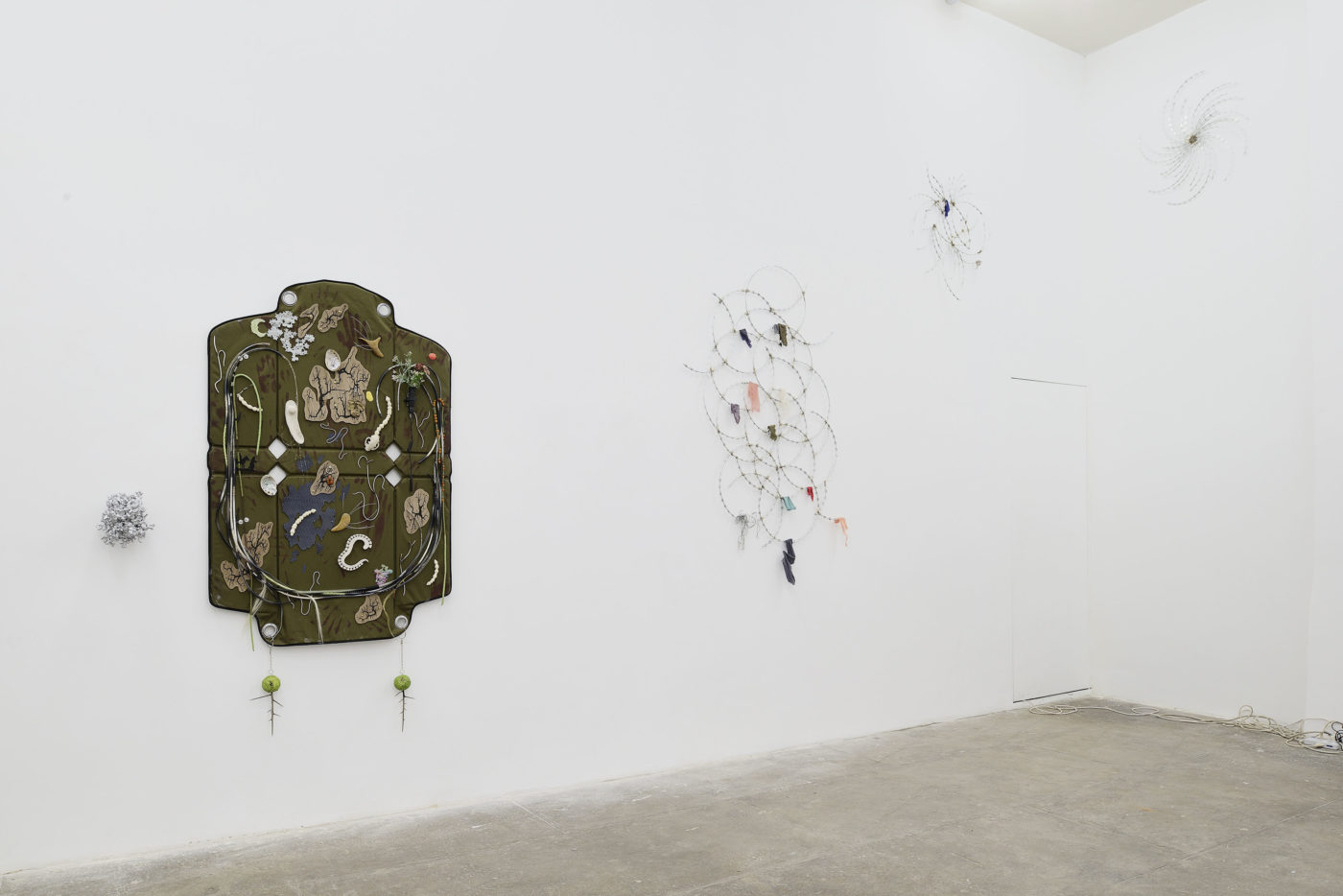 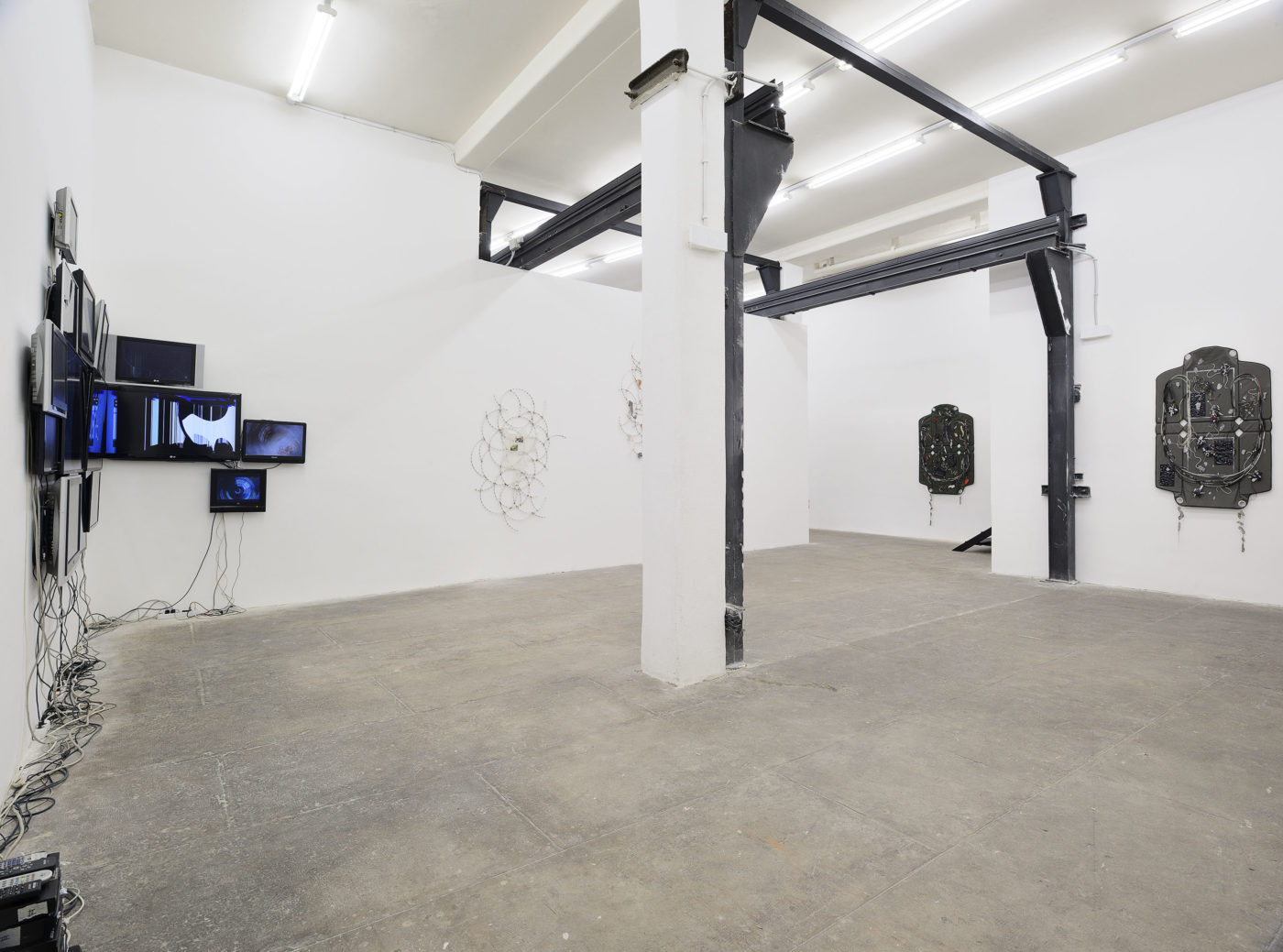 The razor wire sculptures represent both the ingenuity and cruelty of the modern age. Considered a brutal invention, razor wire has directly impacted the way lands have been divided and bodies controlled. Originally created to restrict the movement of cattle, razor wire ended up being used to restrict humans, from the western expansion of America to battlefields during World War I to detention camps across the world. Concertina and barbed wire are now ubiquitous in border controls worldwide. For this show, Ni has created a series of weavings by using two kinds of wires and various textiles, reinterpreting the common scene of clothes trapped and tangled on razor wires at borders.

The “breaching charges” are inspired by a fictional tactical breaching explosive mat used in “Rainbow Six Siege,” an online shooter game that centers around raids by special forces. The game is based on real-life governmental anti-terrorism unit operations. Players are divided into a defense team that reinforces walls and sets up barricades and traps to hinder attackers, and an attack team that raids buildings by breaking down walls and disabling traps in their attempts to eliminate the opponent.

Players use the “breaching charge” tool to blast through spaces. In Ni’s show, these tools become quilts that narrate movement-based violence, specifically, authorities’abilities to “move through walls” in dense urban environments to control people.

Finally, broken and fragmented flat screen TVs are hung on the walls, each playing videos recorded by sports or dashboard cameras spinning during accidents, creating a kaleidoscopic effect. The compilations comprise clips sourced from YouTube as well as footage filmed by the artist. This installation is not only a reference to the rise of body-worn cameras and self-surveillance technologies, but also an accidental futurist painting in motion that celebrates both speed and accidents.