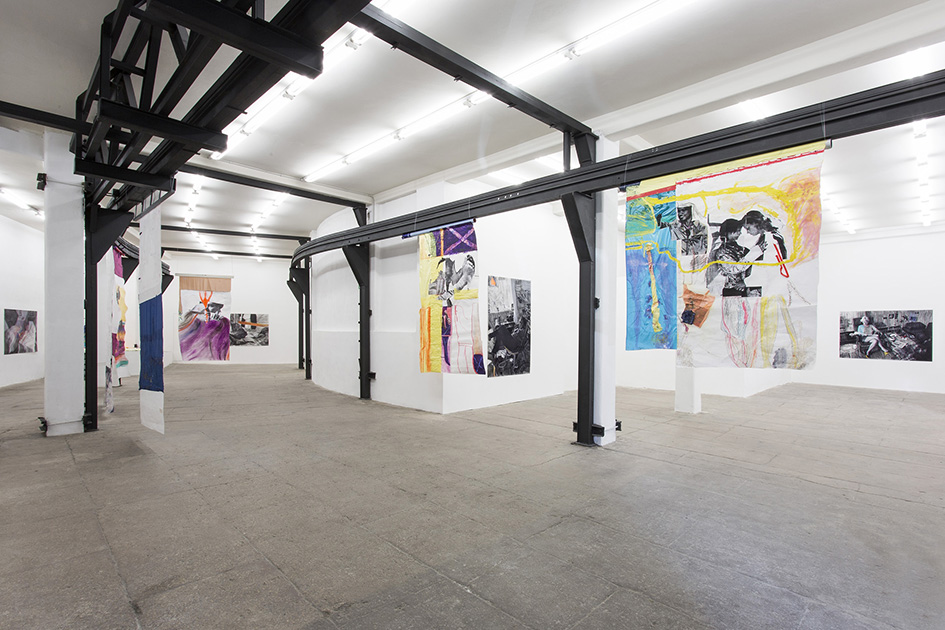 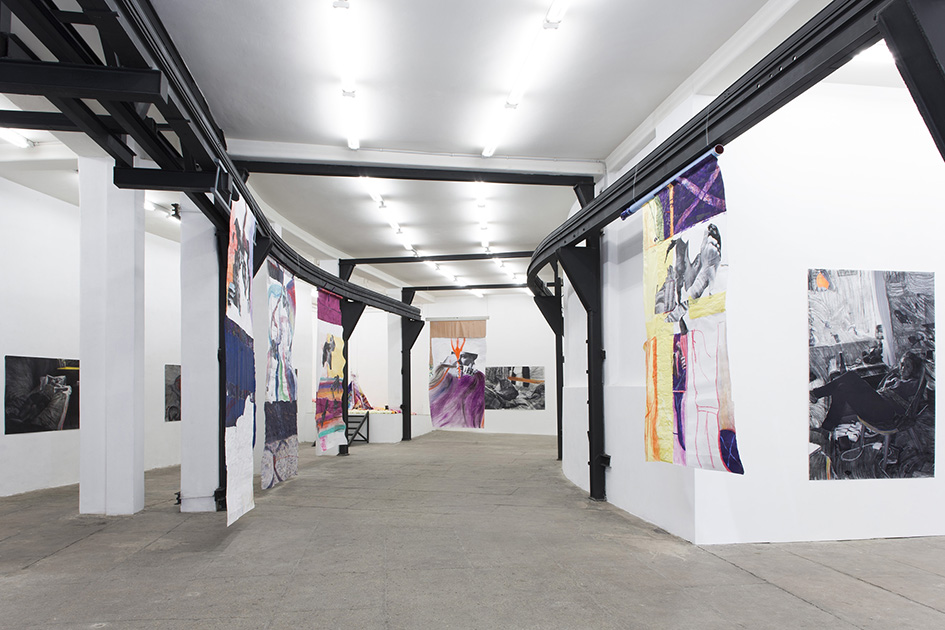 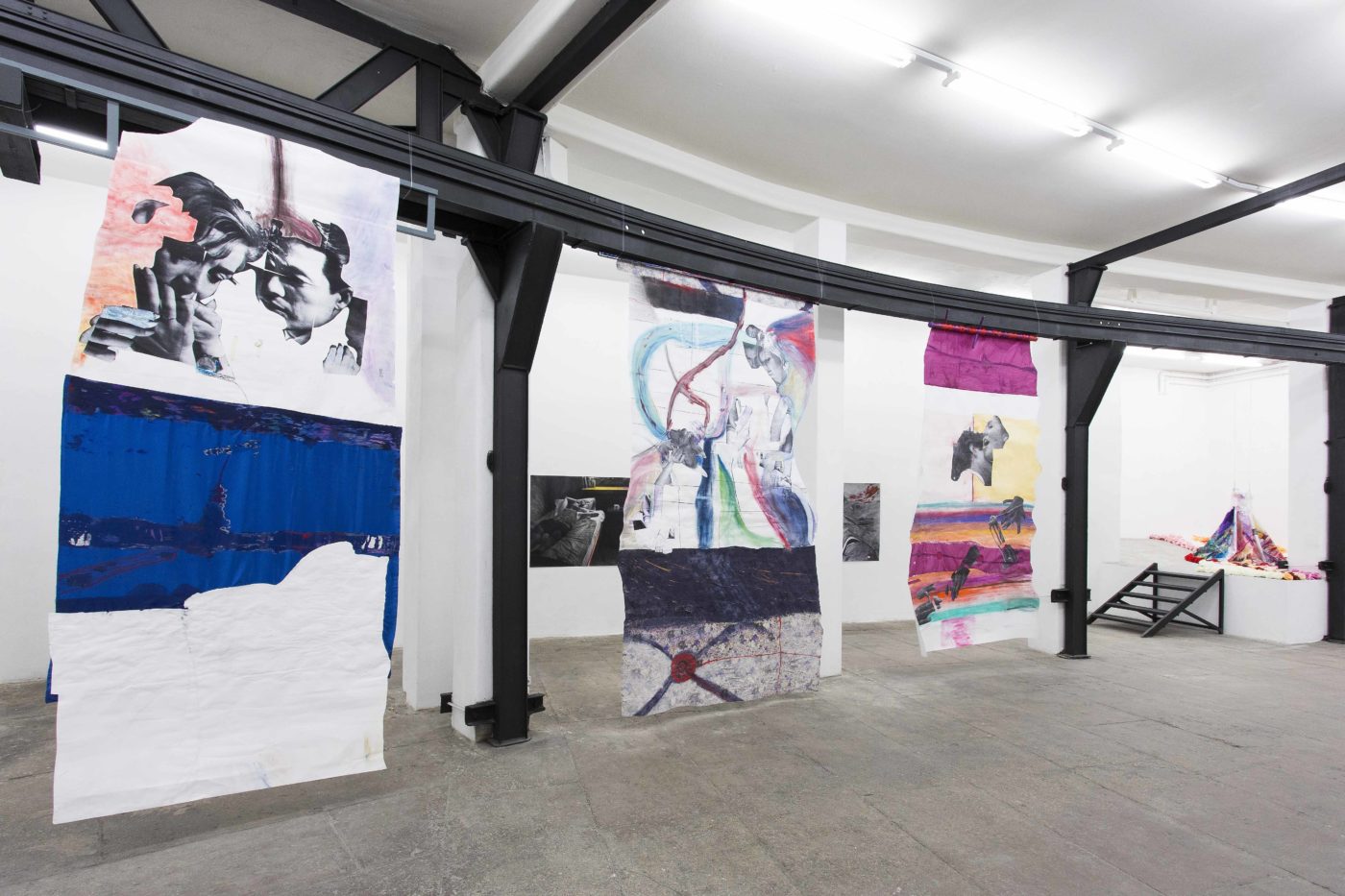 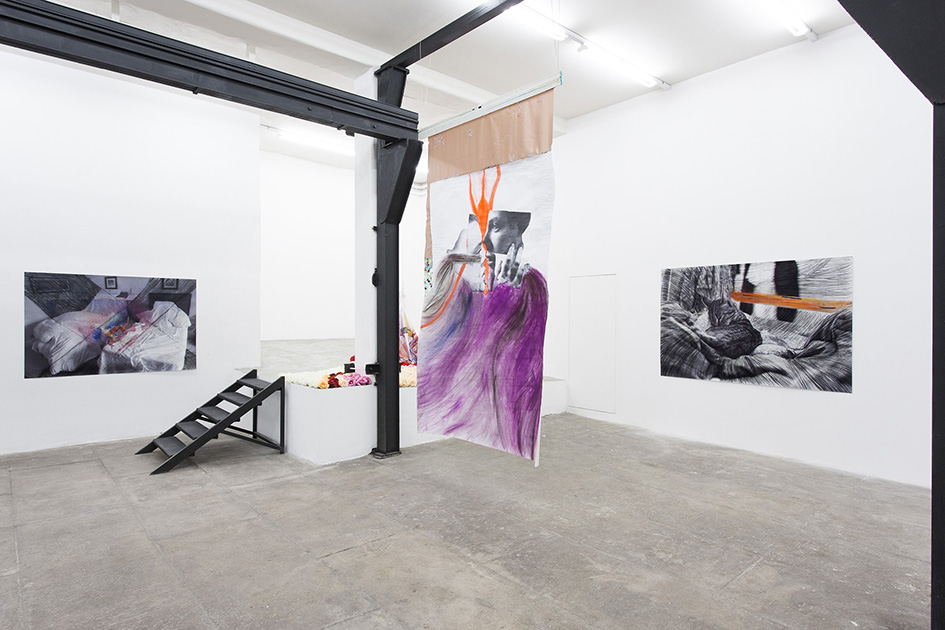 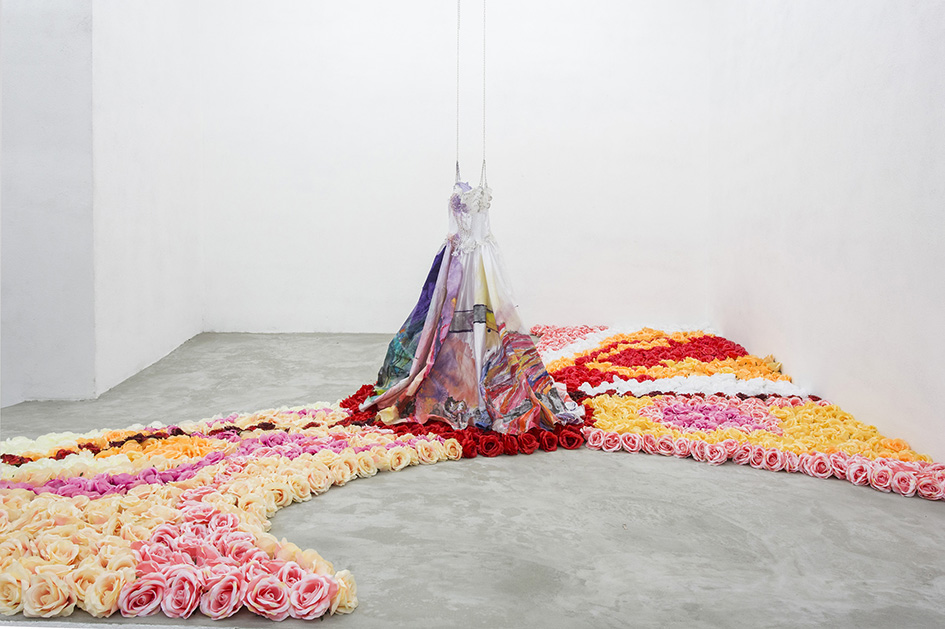 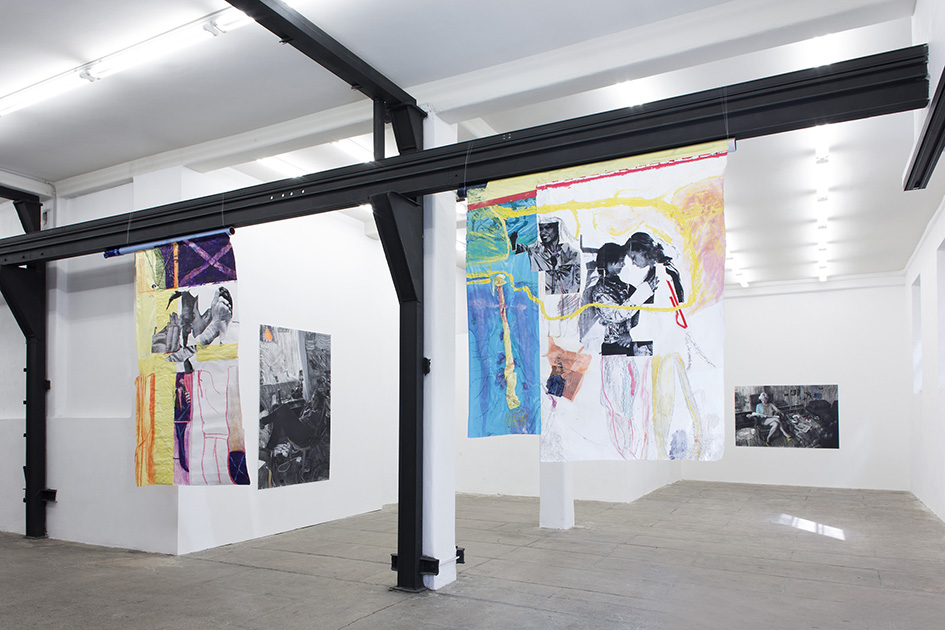 The expression “it’s complicated” is often called on to describe the status of romantic affairs. Its clichéd ring makes you cringe as you pronounce it. Yet, it undeniably comes in handy when someone probes the state of your current involvements. Facebook has even introduced the term as a category in their relationship menu, alongside the standard labels “in a relationship” and “single”. Perhaps stating “it is complicated” would be more honest in any case, as all relationships are contingent on a partial disclosure, and kept up by behaviours that espouse fidelity mainly to reassure. Under the sheen of commitment less admirable drives always scheme. For his show Well Received Lies at T293, Henrik Olai Kaarstein evokes this scene of pending transgression to propose affinity in a group of images spanning from intimate photos of friends and lovers, to cinematic variations on the theme “forbidden love” and global politics.

A pink wedding dress is suspended from the ceiling above a tacky carpet of fake roses. The lower part of the dress is adorned with prints showing political meetings related to the US intervention in the Arab World (Powell lunching with Reagan, Rice posing with Gaddafi, Bush Senior with a Saudi-Arabian prince). A set of stairs enables a private rendezvous between viewer and object, undermining the official air that both images and garment exude. The face of political representation is collapsed onto the fabric (literally and figuratively) of romantic love. The prolonged scrutiny of marriage forces disclosure. Post Wikileaks such post-coital transparency has bled from the bedroom over into the realm of international relations. The state suggested is the global intimacy that limitless information access promises.

Kaarstein’s “Portrait” -series also elicit the quality of garments, both in terms of texture and by their proximity to the naked body. Images sourced from a private folder on the artist’s computer, depicting friends and lovers in different stages of intimacy (a man’s corset-clad torso up close, another man splayed naked across a bed, a woman casually reclined in a chair, a sleeping cat) have been printed in b&w in large formats and then retouched with coal and chalk. Kaarstein’s curved hatchings bring illusory volume and a sort of vertigo effect to the images, melding figure and ground. Pictorial content is exchanged for ambience. Kaarstein’s coy aestheticization is furthered by the b&w palette. His subjects are coaxed from the affective realm of homemade “soft porn” into low dimensional decór, acclimatized to a culture of constantly shifting attachments. All titles point, with varying degrees of exactitude, to geographical locations (Hans Holmboes Gate; Oslo; Documenta 13; Roma; Rio), mapping a restless sifting through people and places.

A flimsy corridor of large dirtied collages made of adjoining sections of paper and satin, drop from beams stretching through the gallery. Stills lifted from films dealing with difficult or forbidden love (Brokeback Mountain, Hiroshima Mon Amour, Birth, Monster, Crazy/Beautiful, Secretary) have been printed through an online service for assembling makeshift movie posters. These prints have then been cut up and large sections of the pictures removed. Abstract outlines and fields of diluted colour float around these isolated embraces. The proliferation of disembodied hands now groping bland abstractions rather than flesh, suggests a transfer of libidinal investment onto the unresponsive surfaces of art works (or screens)—the formation of a compact between hot, receptive flesh and a different type of object altogether. “Lovers, they all lie so beautifully.”