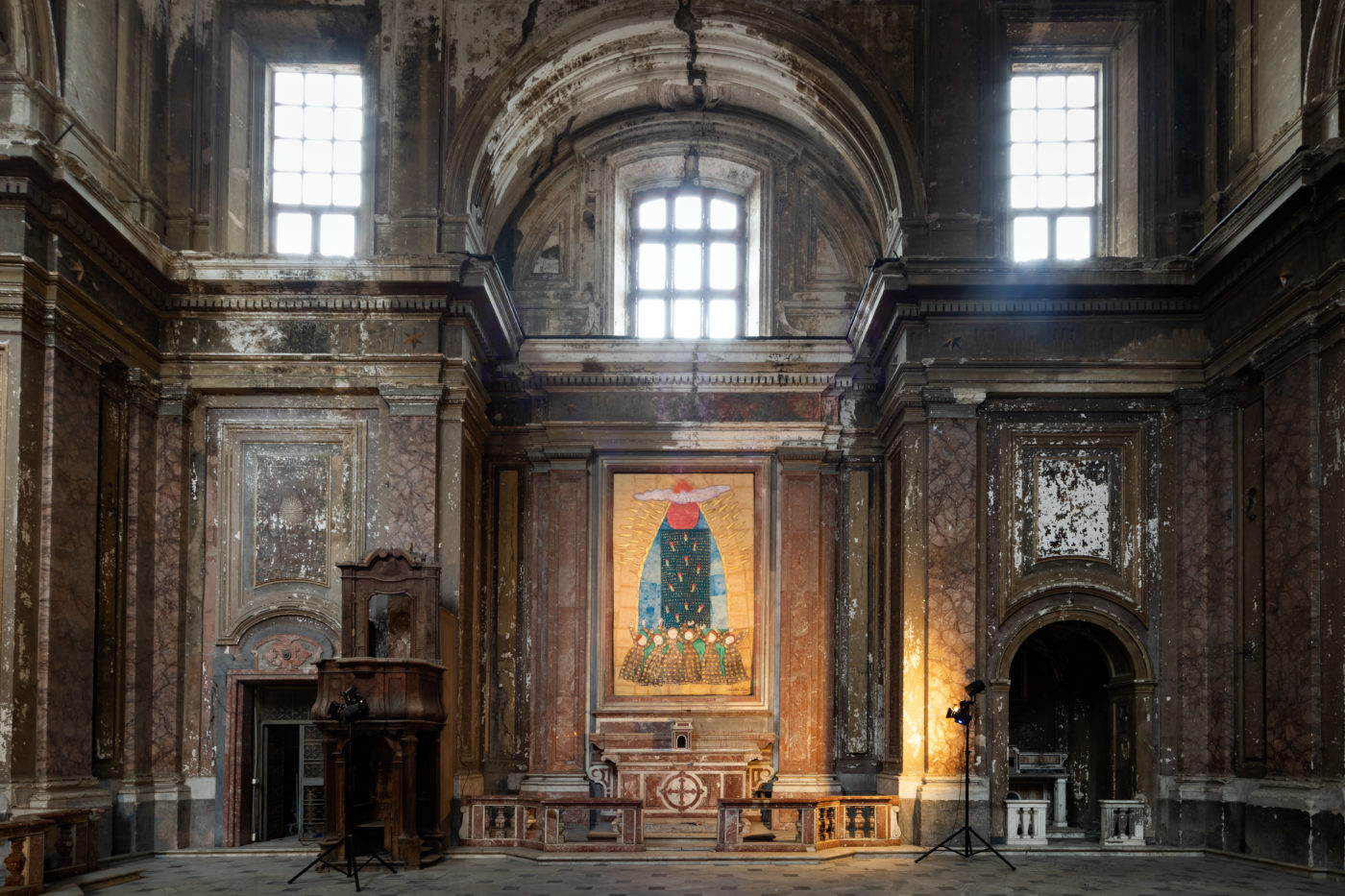 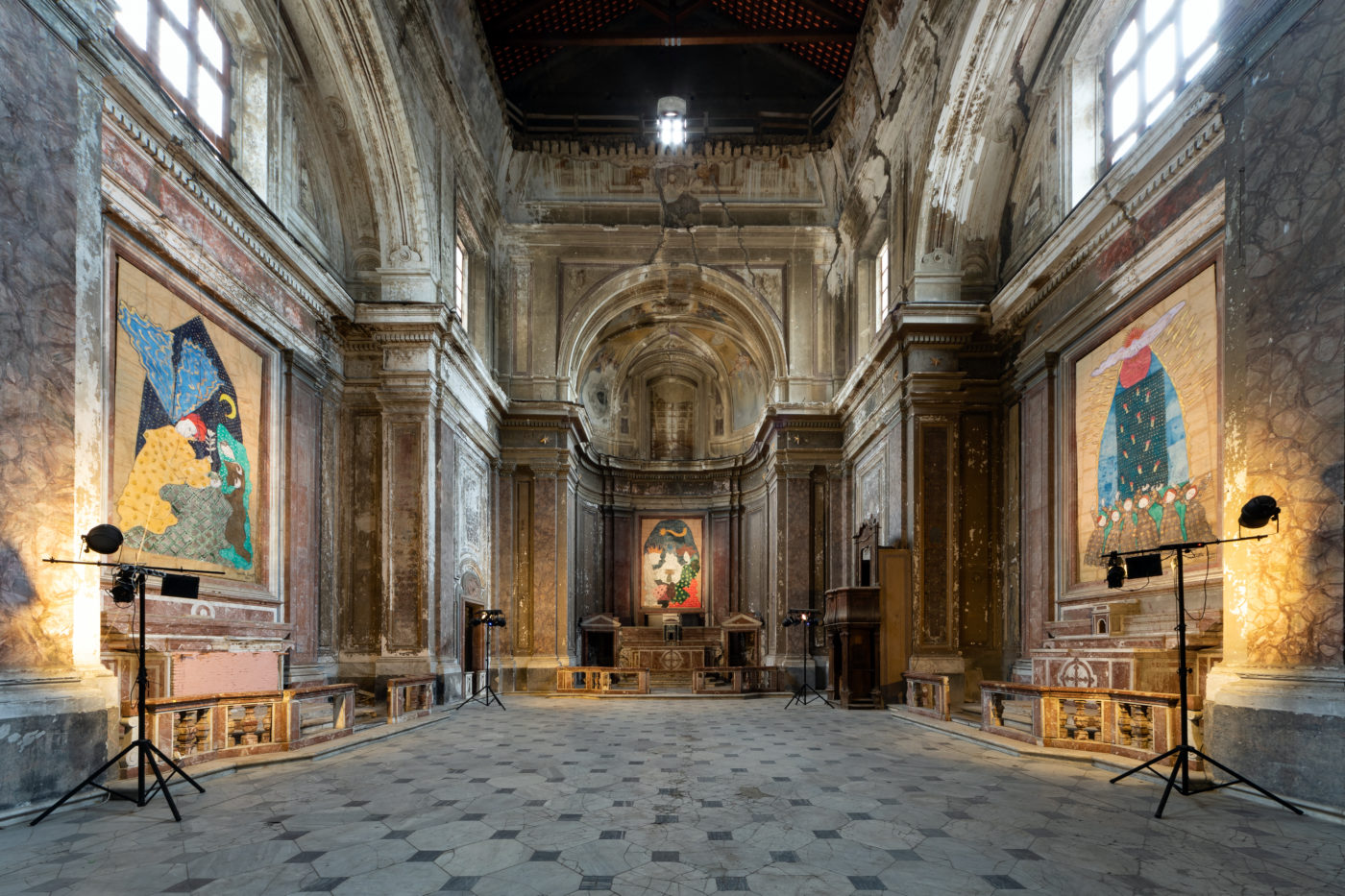 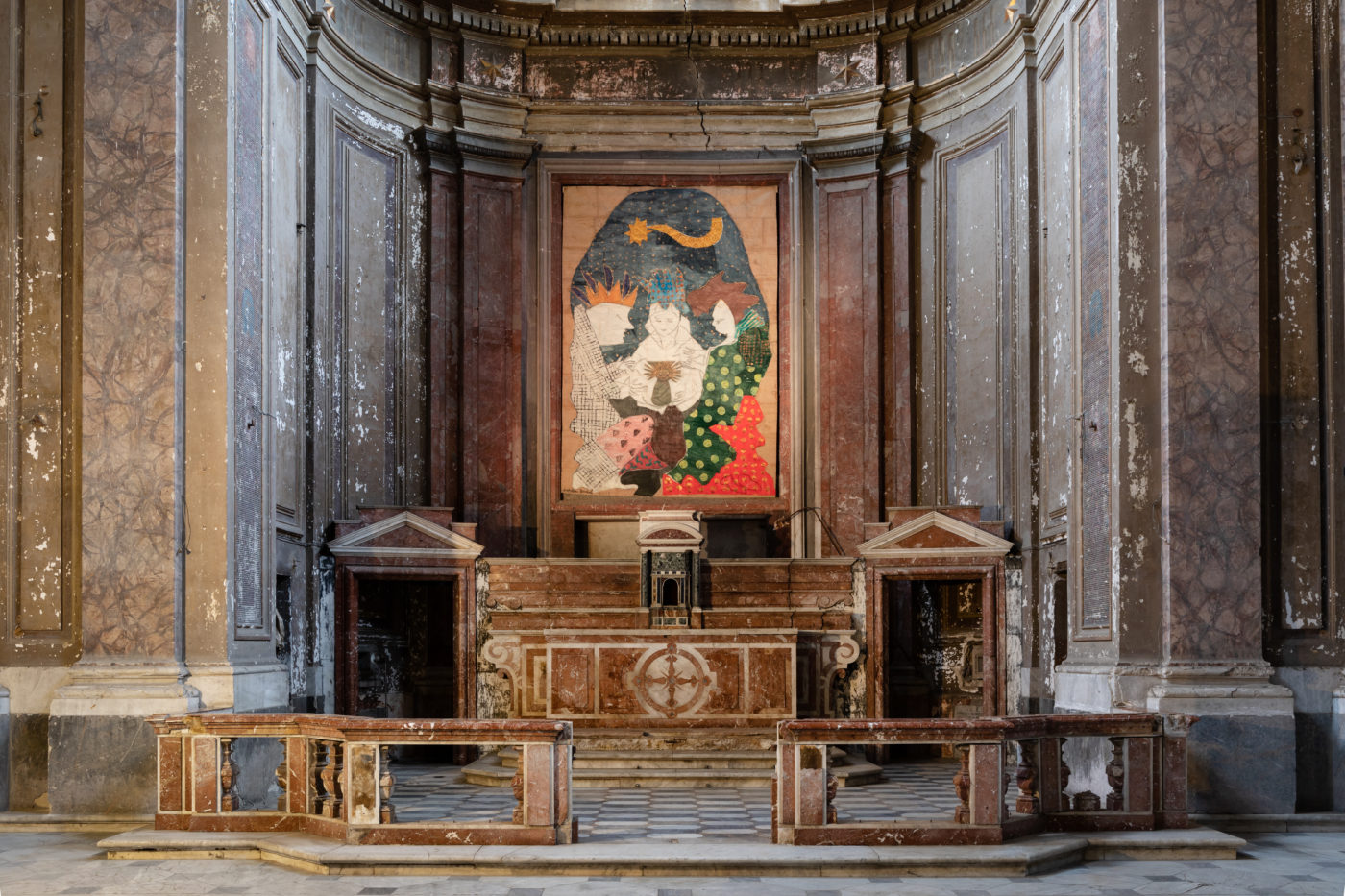 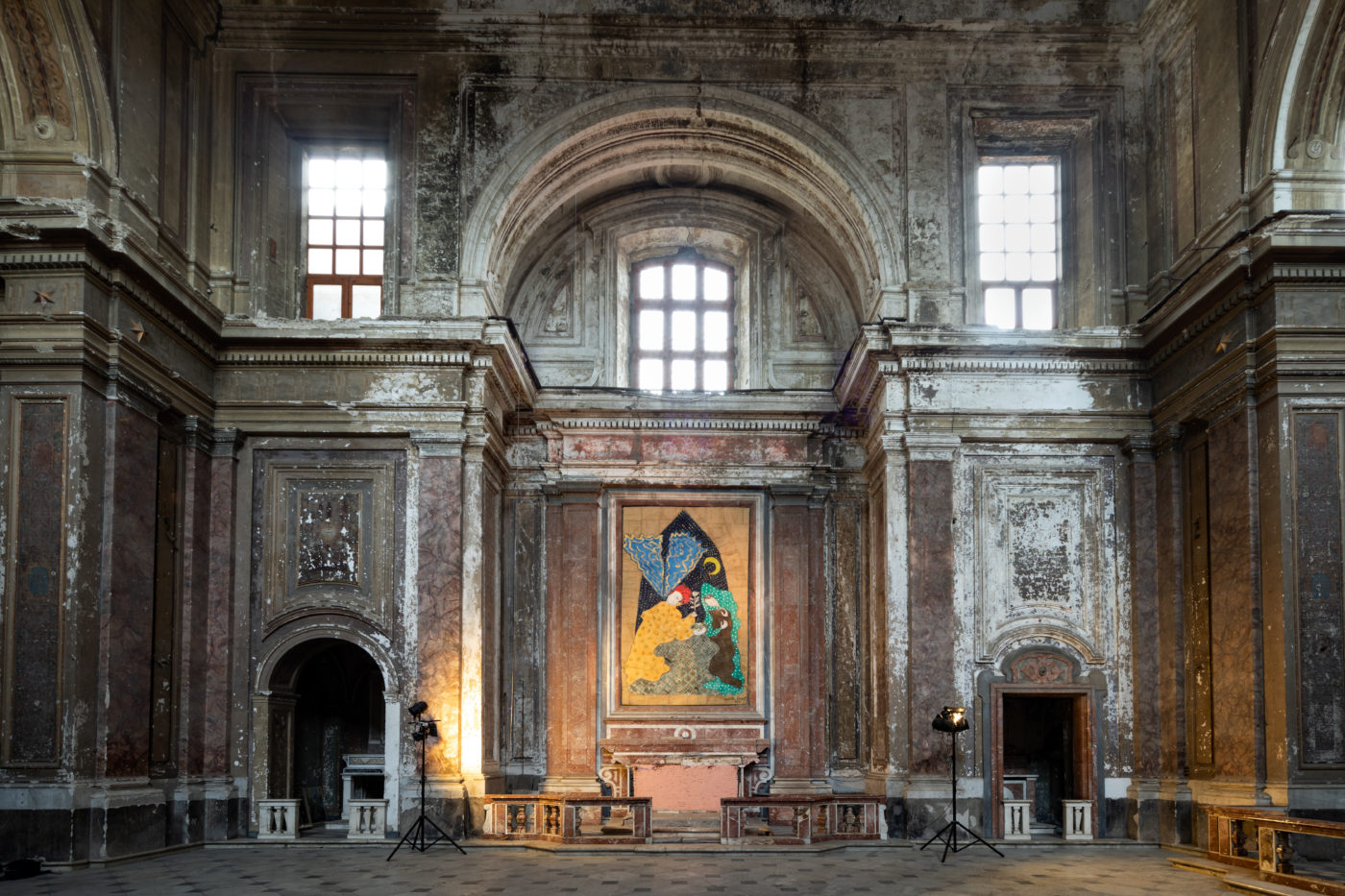 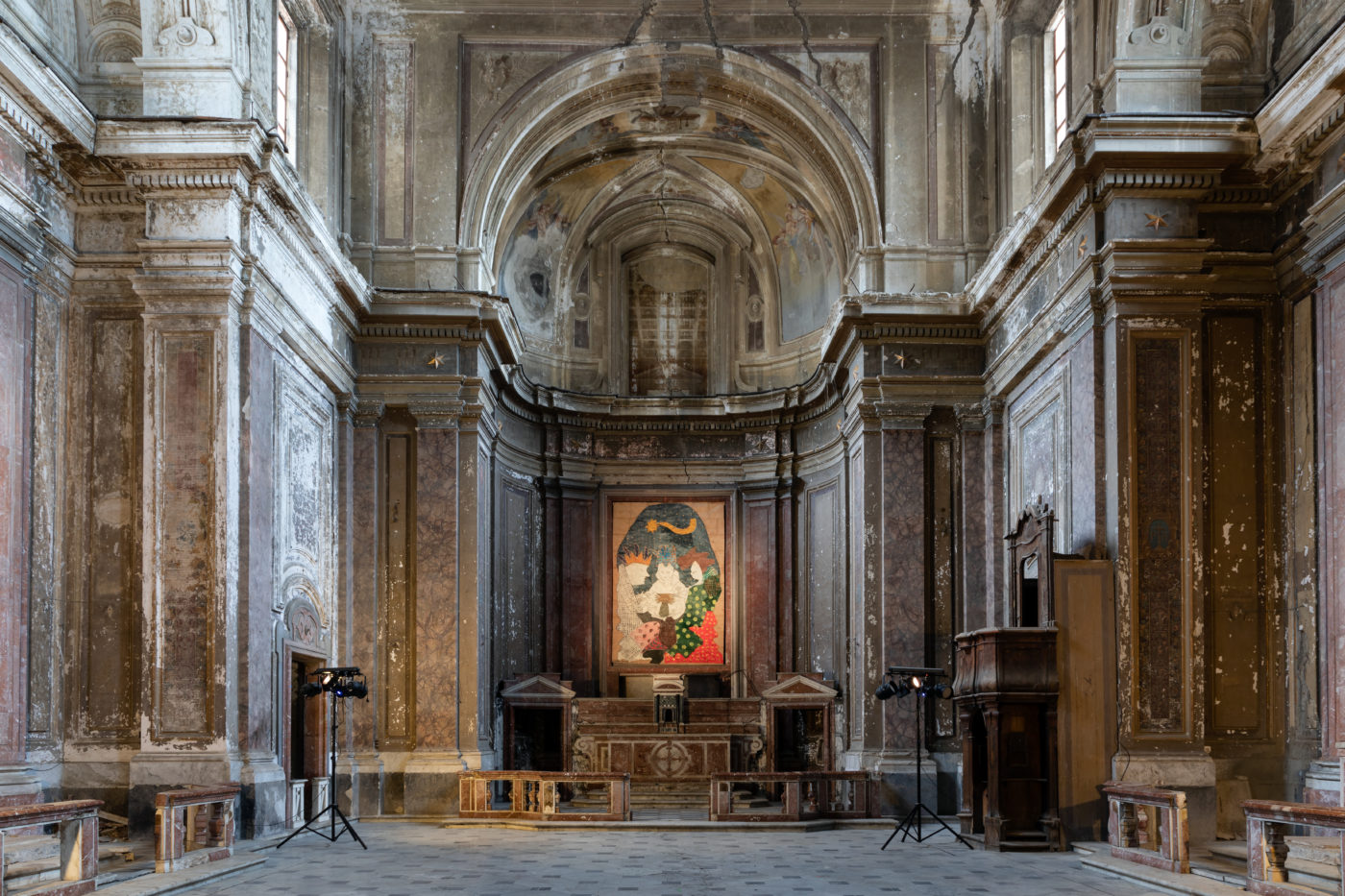 T293 and Collezione Agovino are pleased to present ‘Il Miracoloso’, a solo exhibition by Isabella Ducrot at San Giuseppe delle Scalze church, in Naples. For the opening, which takes place on December 4, the church will host a concert by the classical composer and arranger Igor Caiazza. The composer, accompanied by two other musicians, will play a series of classical pieces inspired by Isabella Ducrot.

“Thanks to a proposal of Paola Guadagnino and Marco Altavilla, last August I went for a quick trip to Naples, it was a question of visiting the Church of San Giuseppe delle Scalze near the Archaeological Museum. The current state of the building is what remained following the earthquake of fifty years ago, a splendid Baroque testimony. Now this monument, having lost its function as a sacred place, relives a new secular destiny and offers hospitality to art exhibitions, concerts, conferences.

Arrived in Naples, at the end of a steep climb we suddenly found ourselves among gaunt, battered buildings in front of a spectacular facade, all scrolls, niches and sculptures, a large portal and then a monumental staircase. When I finally reached the inside of the great central nave of the Church, I was invaded by a very strong feeling of comfort: I had returned to benefit from the typical Neapolitan Spatial Proportions! Impoverished, but never desolate, now deprived of decorations, the ancient seventeenth-century architecture reduced to its essentials was consoling to me, it seemed to want to reassert me misunderstood but felt beliefs from my childhood. No! it’s a waste in here, nothing can be trained, we want to be solemn, that the entrance halls, the ramps, the arches are wide, the vaults are crossed by the winds that come from the sea. Let nothing be tamed here, let common sense be forgotten. After all, I was born in Montedidio.

Being able to attend that place and intervene in its fabulous bearing seemed to me a unique opportunity. I already agreed with emotion to adapt to its grandiloquence, to confirm its exaggeration, to dare and get closer to its restrained wildness. I was wondering if I could dare to cover the bare walls that once housed the immense altarpieces by Mattia Preti and Luca Giordano.

That hot August day I thought of everything, that I had returned to Naples to fill the unadorned spaces above the altars of San Giuseppe alle Scalze. Distant memories of my religious upbringing pressed into my mind. I had erased them, yet now the “imaginette”, small postcards that illustrated the life of Jesus preserved in the pages of my Missal, appeared clear and current to me.

During the recent pandemic, it happened to me to suspend my habitual suspicious attitude towards everything that could be defined as “the miraculous”; before that fateful 2020 I had a healthy mistrust in this regard, I practiced the cult of the “reasonable”, a kind of devotion to the “plausible”. It seemed more serious to me. However, during the universal retreat, when “stay at home” became the imperative of all the governments of the world, I developed a new awareness, that of sharing a common destiny. I was part of a whole. The word “all” miserably assumed the task of containing billions of women, men, children, rich, poor, healthy, sick, good and bad, emigrants and permanent residents, newborns and dying affected by the same threat. That word struggled to hold those many meanings, revealing its own failure to describe an unprecedented condition.

In the days of the great retreat and global bewilderment, as the earth became ever smaller and more fragile, I wondered if it is the language of science fiction that can provide expressive means faithful to the truth of our still being singular and at the same time to the miracle of not being no more. Or perhaps everything has already been said by a Neapolitan poet with the verses of a song written by him: “Suonno gentile, suspiro mio carnale”. (“Gentle sound, my carnal breath.”)

To honor San Giuseppe delle Scalze I resorted to three episodes narrated in the New Testament, The Annunciation, The Adoration of the Magi, The Descent of the Holy Spirit. The theme that unites them is the “possible miraculous” that concerns us today.”

The exhibition received the Matronage by Fondazione Donnaregina per le arti contemporanee, Naples.