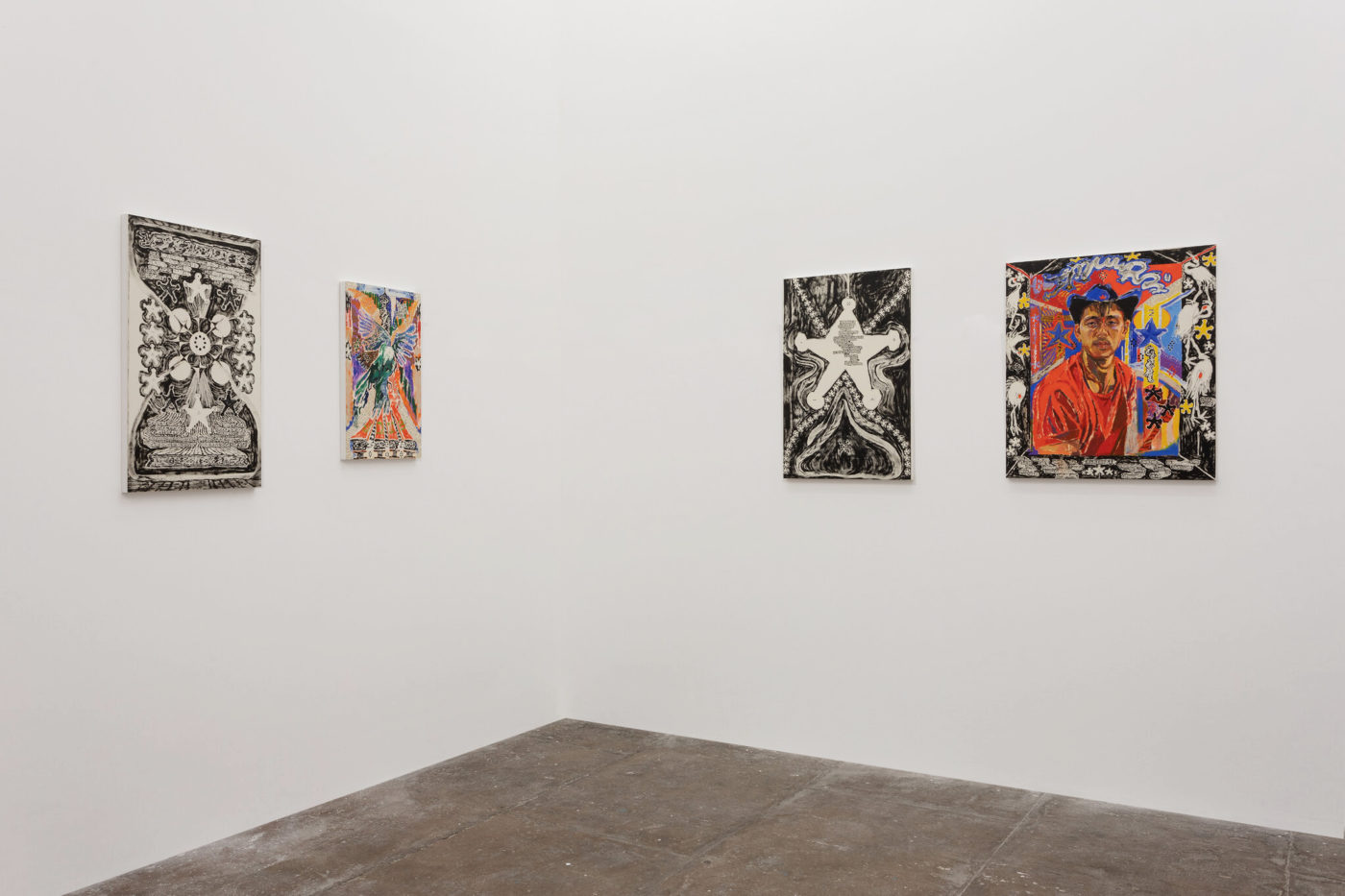 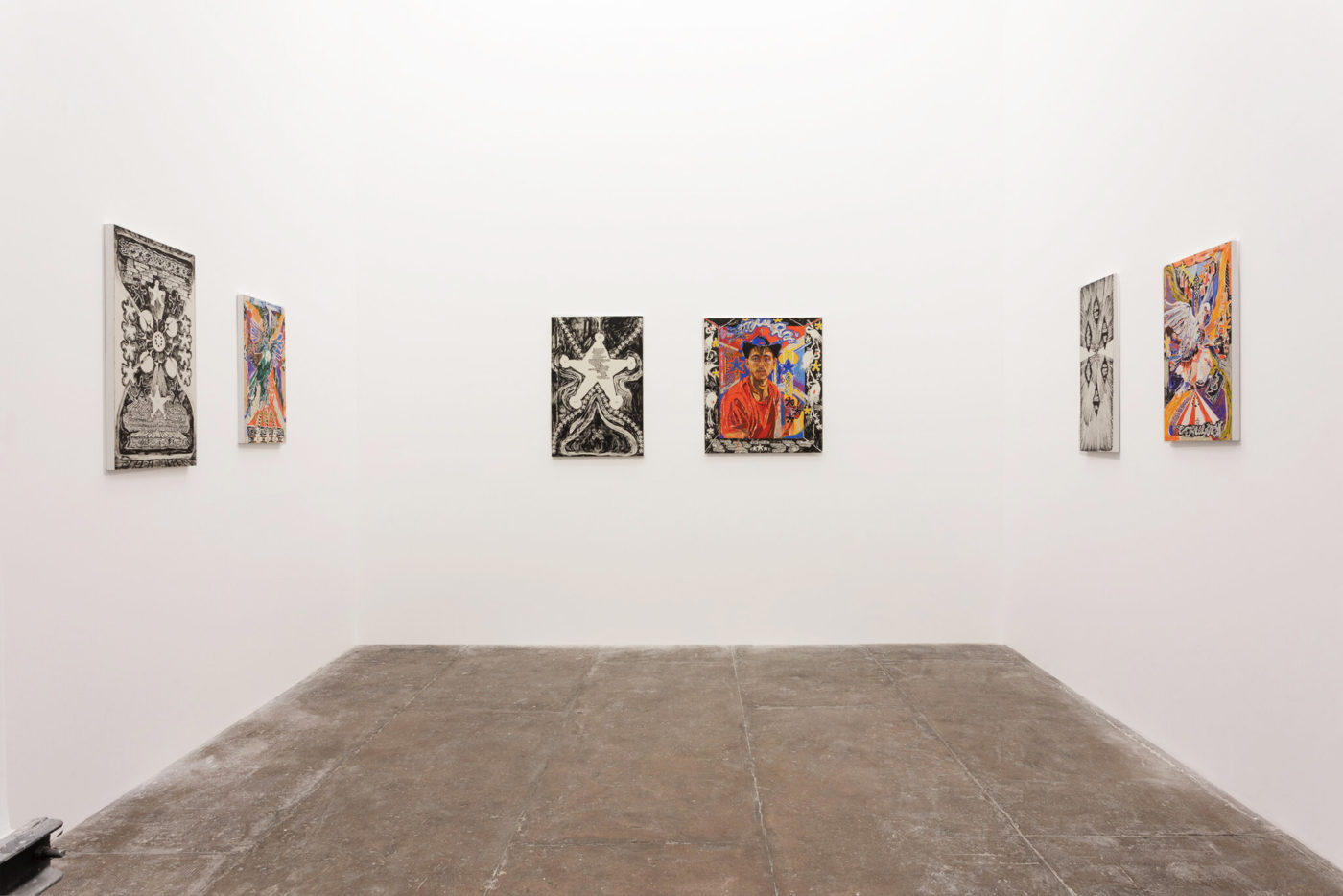 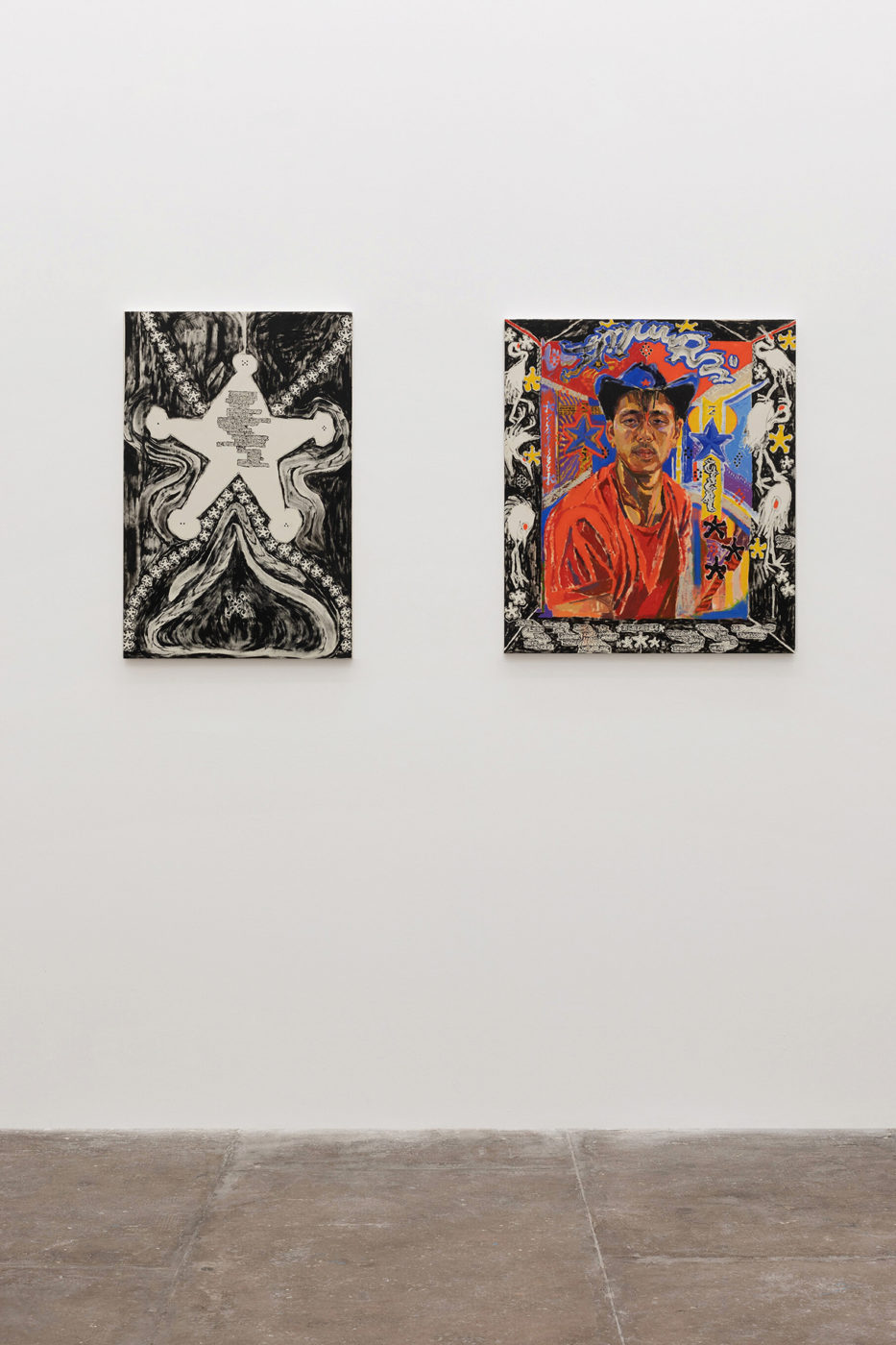 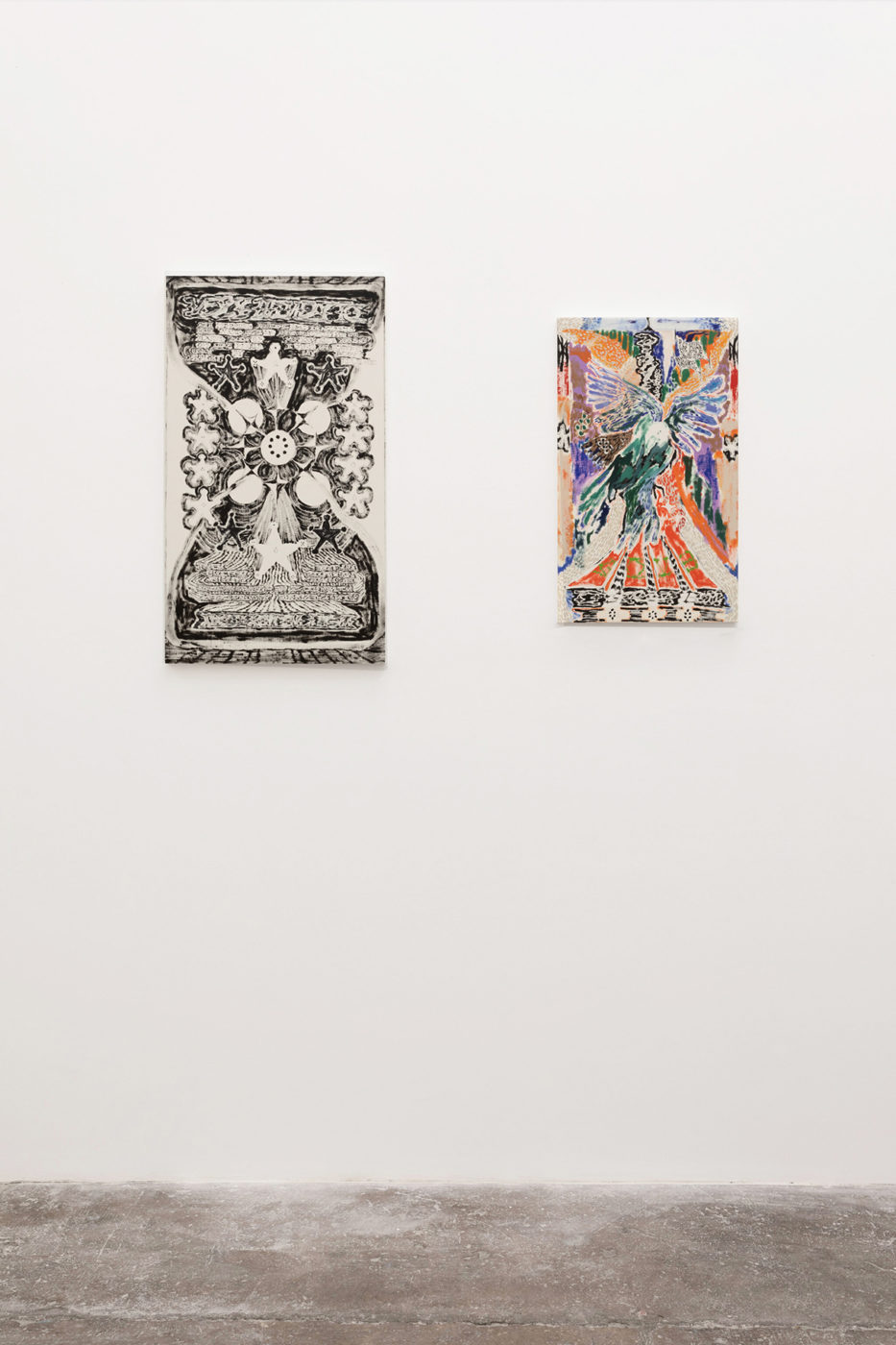 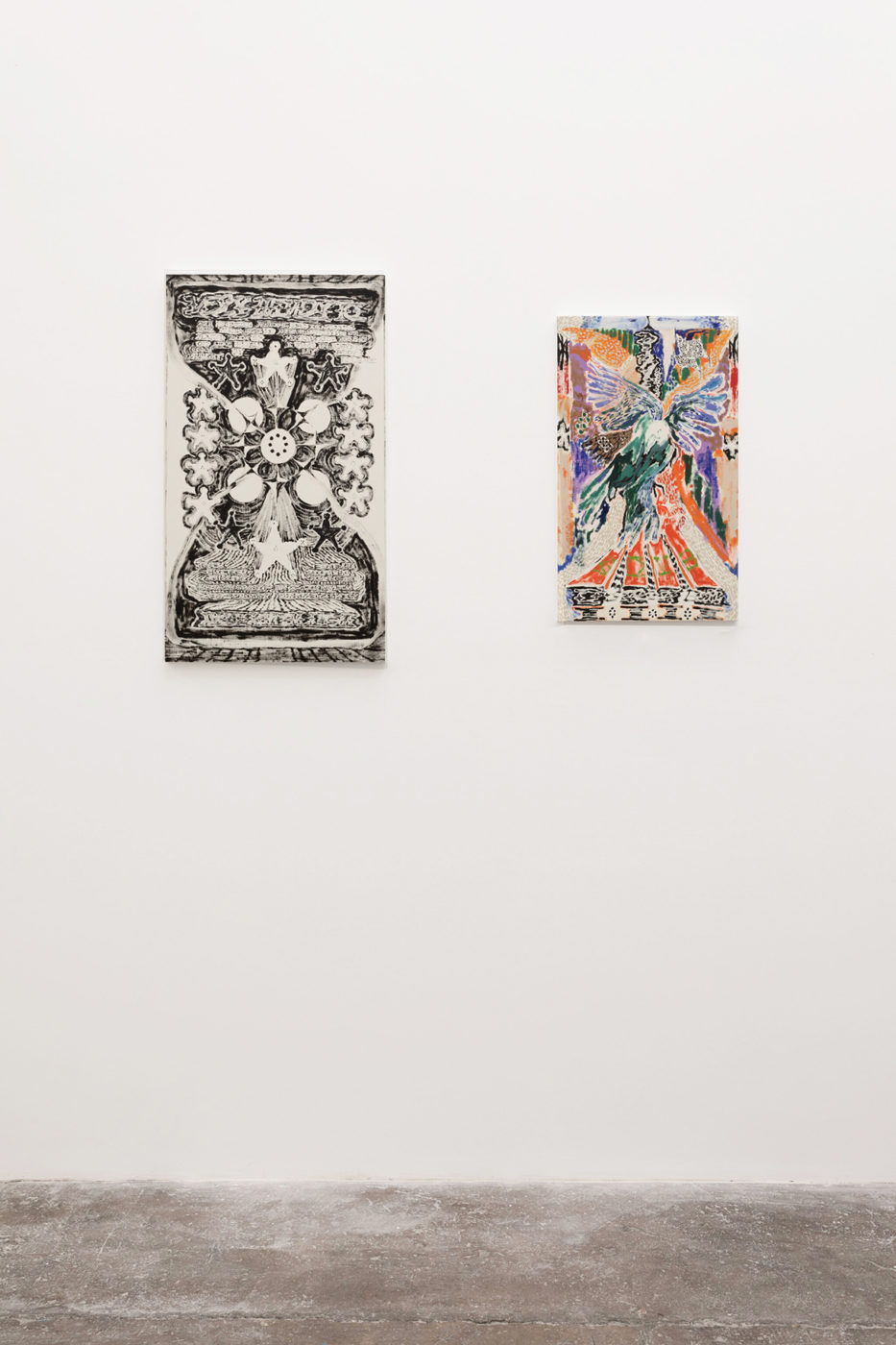 The symbolist painting practice of Oscar yi Hou hybridises Western and Eastern iconography. Born and raised in Liverpool, England, to Cantonese immigrants, yi Hou’s work is influenced heavily by his diasporic upbringing. Through his artworks the artist plays with the estrangement of his ‘foreign’ origin— the mythical Orient — establishing a declaration of ‘otherness.’ The vertical format of this series of works, reminiscent of hanging scrolls, alongside his technical use of black dry-brush, indexes his deep interest in East Asian iconography. At the same time, he is equally captivated by American symbols such as the sheriff-star, cowboy hats, and the urban graffiti of New York City. By harmoniously combining these two visual and cultural worlds, yi Hou conjures a seductive autobiographical visual dialogue between the East and the West.

‘Crane Seeking Comforts’ counts on a complex mythology of iconography and symbolism. Yi Hou’s given Chinese name (一鸣) refers to an idiom that involves a bird— as such, the birds that appear throughout his practise are personifications of the artist himself. In IMUUR2, aka: Cowboy Crane, he represents himself in the margins as red-crowned cranes, traditionally auspicious birds in the Far East. In other works such as ‘Twobird, aka: Copulation’ or ‘Taijitu, aka: Cruising’ , pigeons are metonymically used to address and embody a queer narrative. In other works, such as ‘Sphincter, aka: Two-Pines’ or ‘Moonmad, aka: Cranekiss’ poems written by the artist himself are transformed into highly symbolic, quasi-mythological compositions. For these poem-pictures, yi Hou remixes the classical Chinese calligraphic poem form with his use of English script, interspersed with his trademark symbols of sheriff stars and Buddhist beads.

His treatment of signs and language draws inspiration from the poet and philosopher Édouard Glissant’s text the ‘Poetics of Relation.’ The well-known ‘theory of Opacity’ by the Martinican writer, which comprises of accepting the unintelligibility and impenetrability of cross-cultural communication and consequently refuting complete knowability as a desireable goal, is one of the fils-rouges of yi Hou’s thinking. We can see this in the way he approaches the hegemony of English, treating it as if it were Chinese calligraphy. Yi Hou hides and buries his poems, rendering his native English as ‘inscrutable’ as Chinese may be to the West—and even to himself, by way of his own estranged relationship to the language. In submerging his text almost hieroglyphically, he kindly solicits from the viewers greater attention and patience, as he assures that the poems will slowly reveal themselves to a viewer should they sit with the intricate intimacies of the text a little longer.

In his practice, Oscar yi Hou evokes the ancient Chinese tradition of the “Three Perfections,” classically used to mark the merging of a poet, a painter, and a calligrapher in a single artwork. By mixing language both as subject and object matter while also depicting expressive representations of his lived world as a queer man, ‘Crane Seeking Comforts’ presents a nuanced insight into the postmodern diasporic condition of the 21st century.