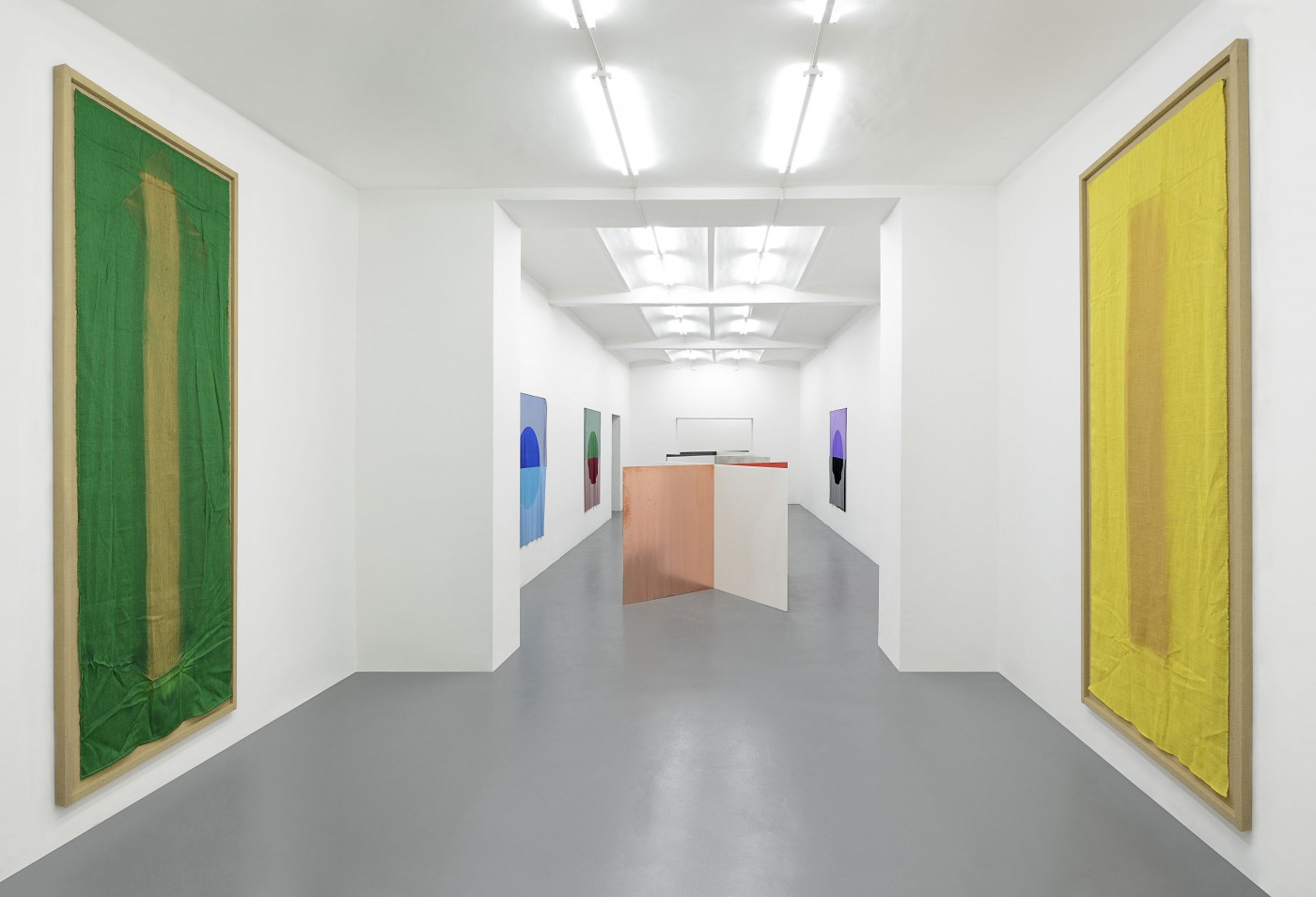 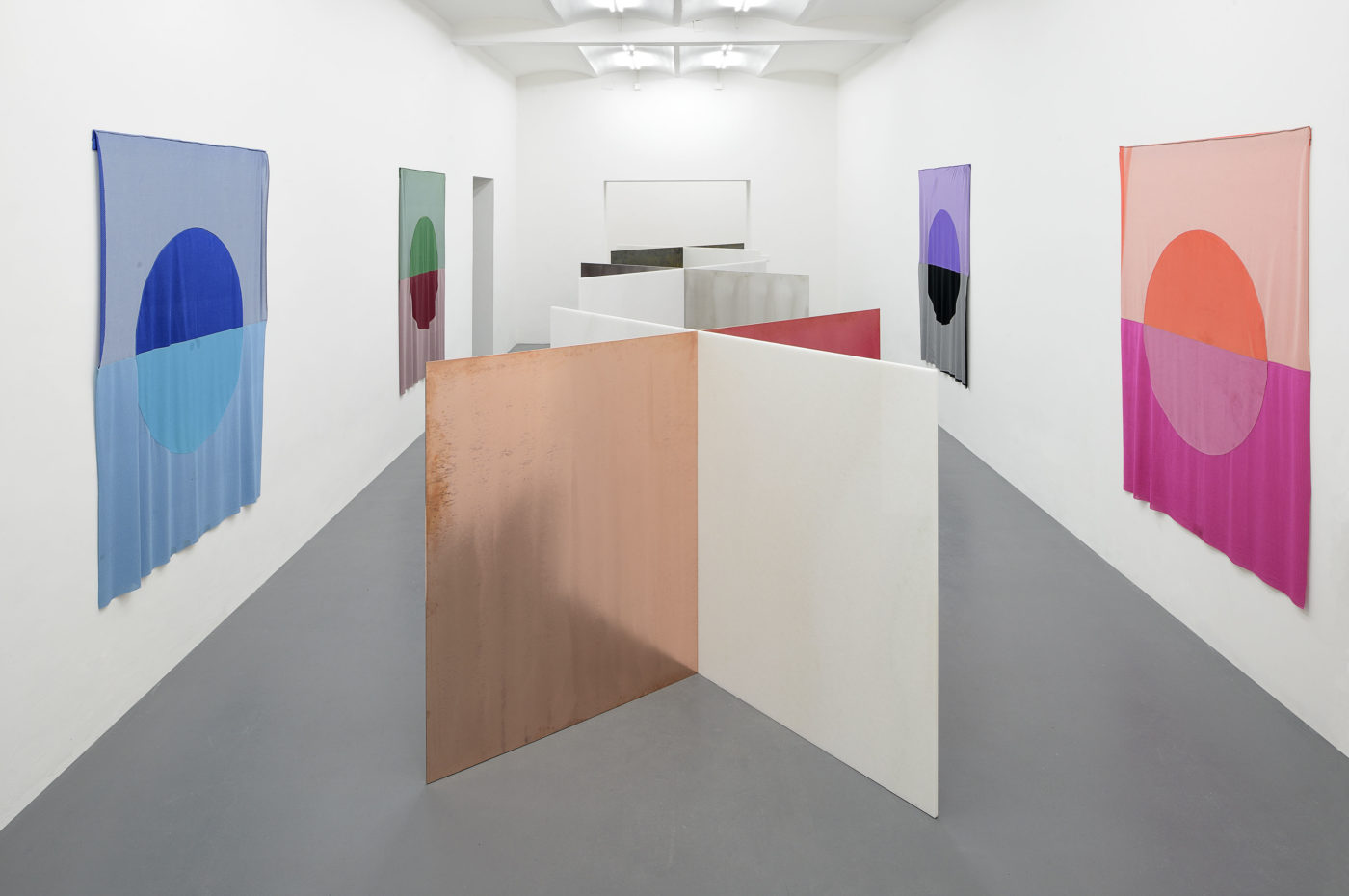 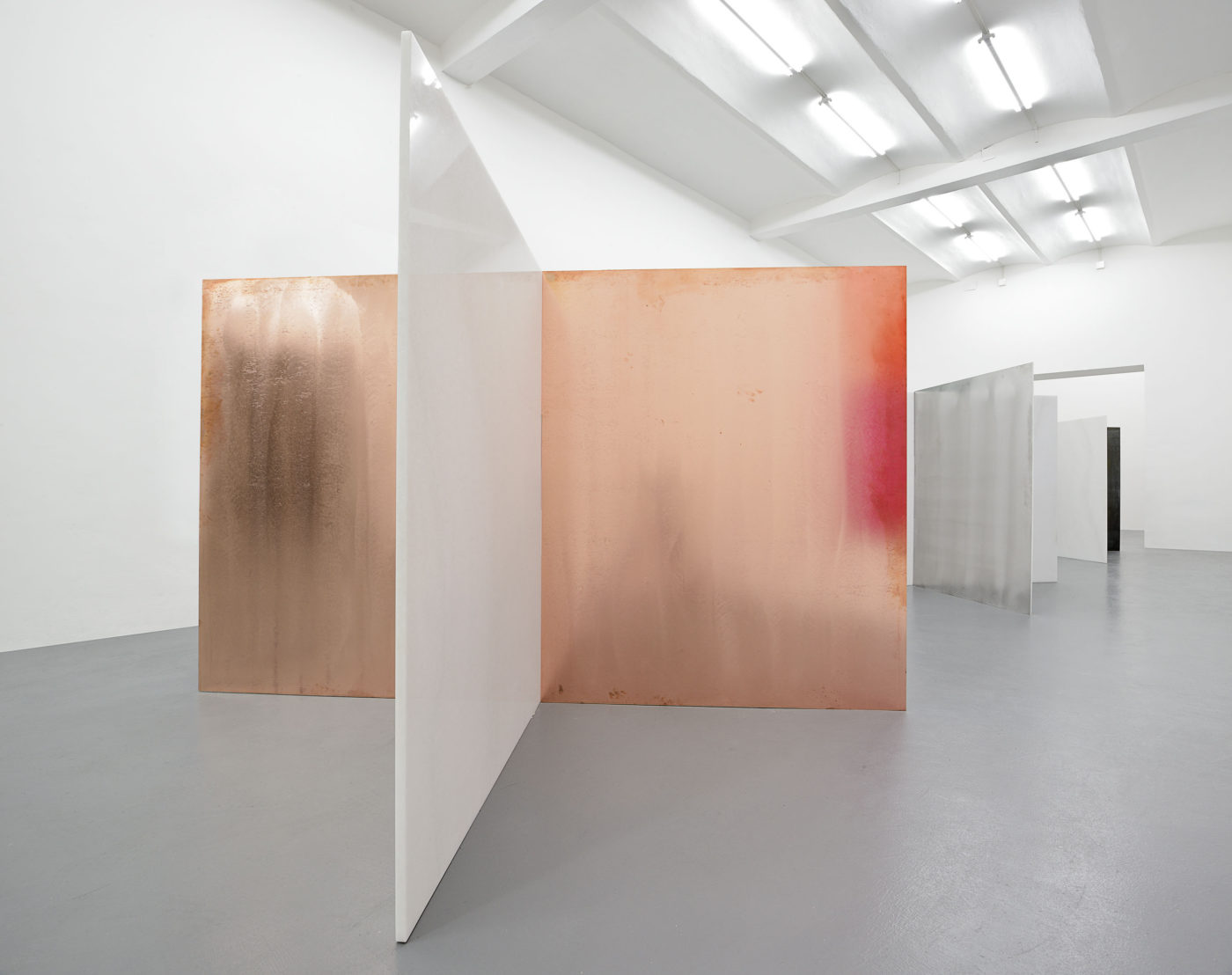 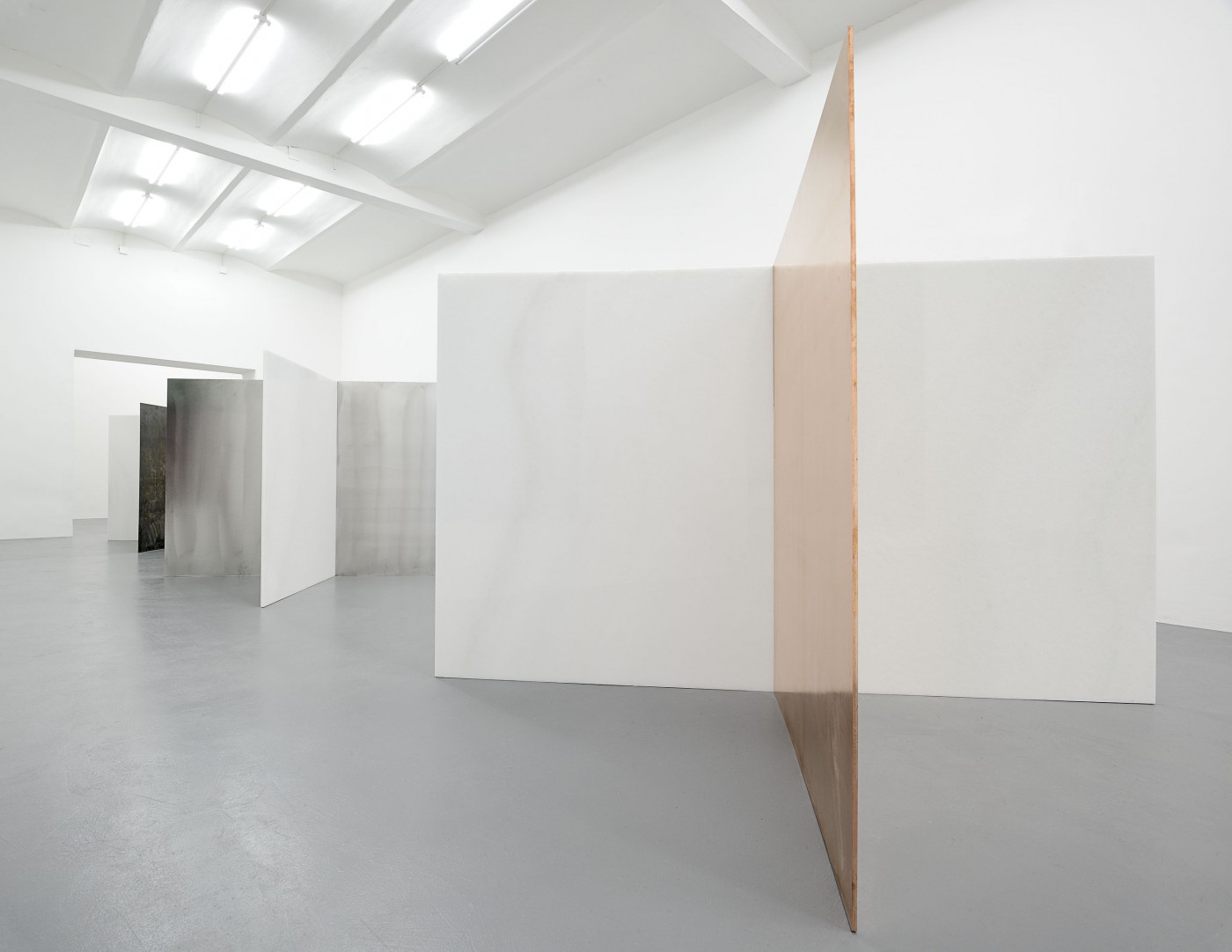 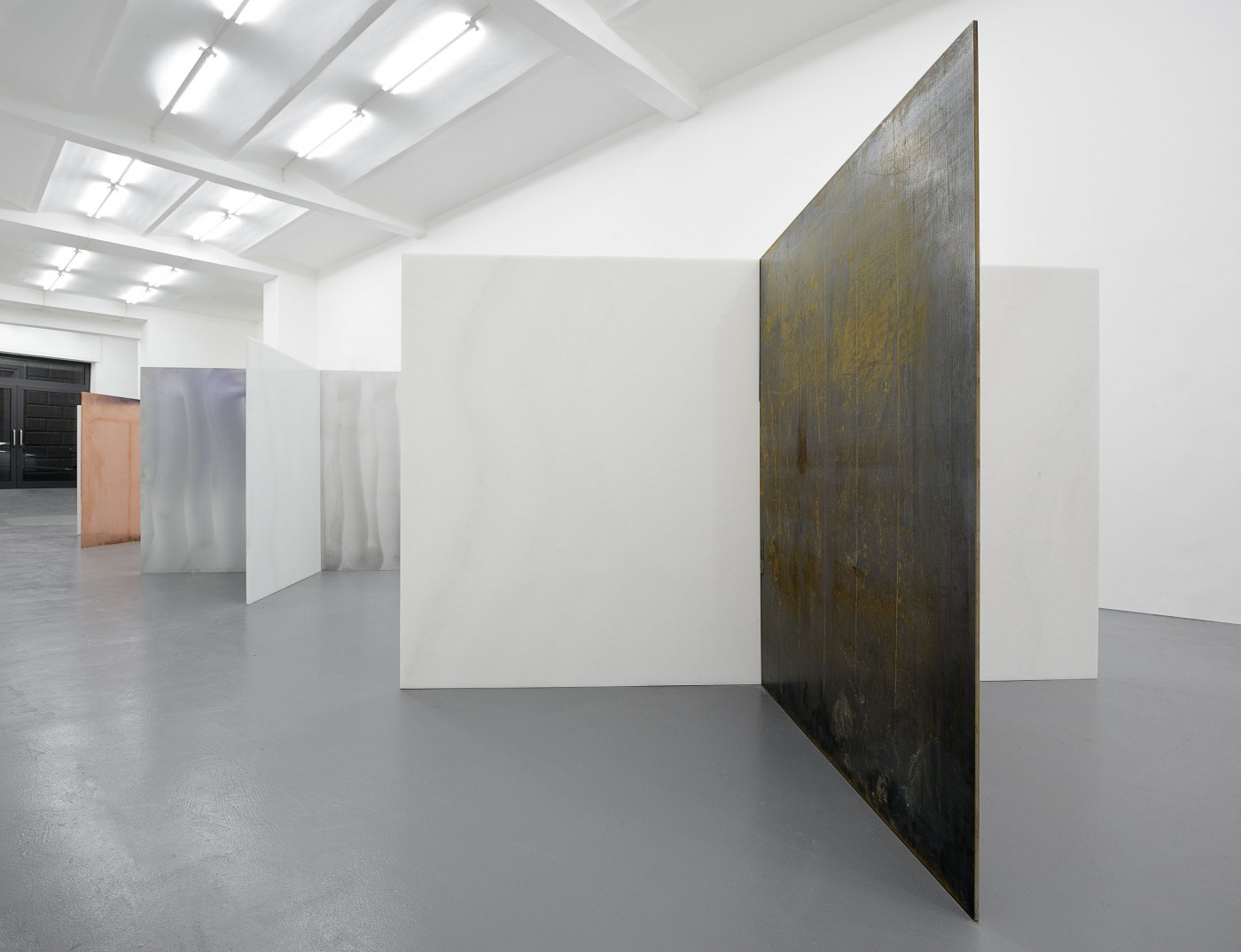 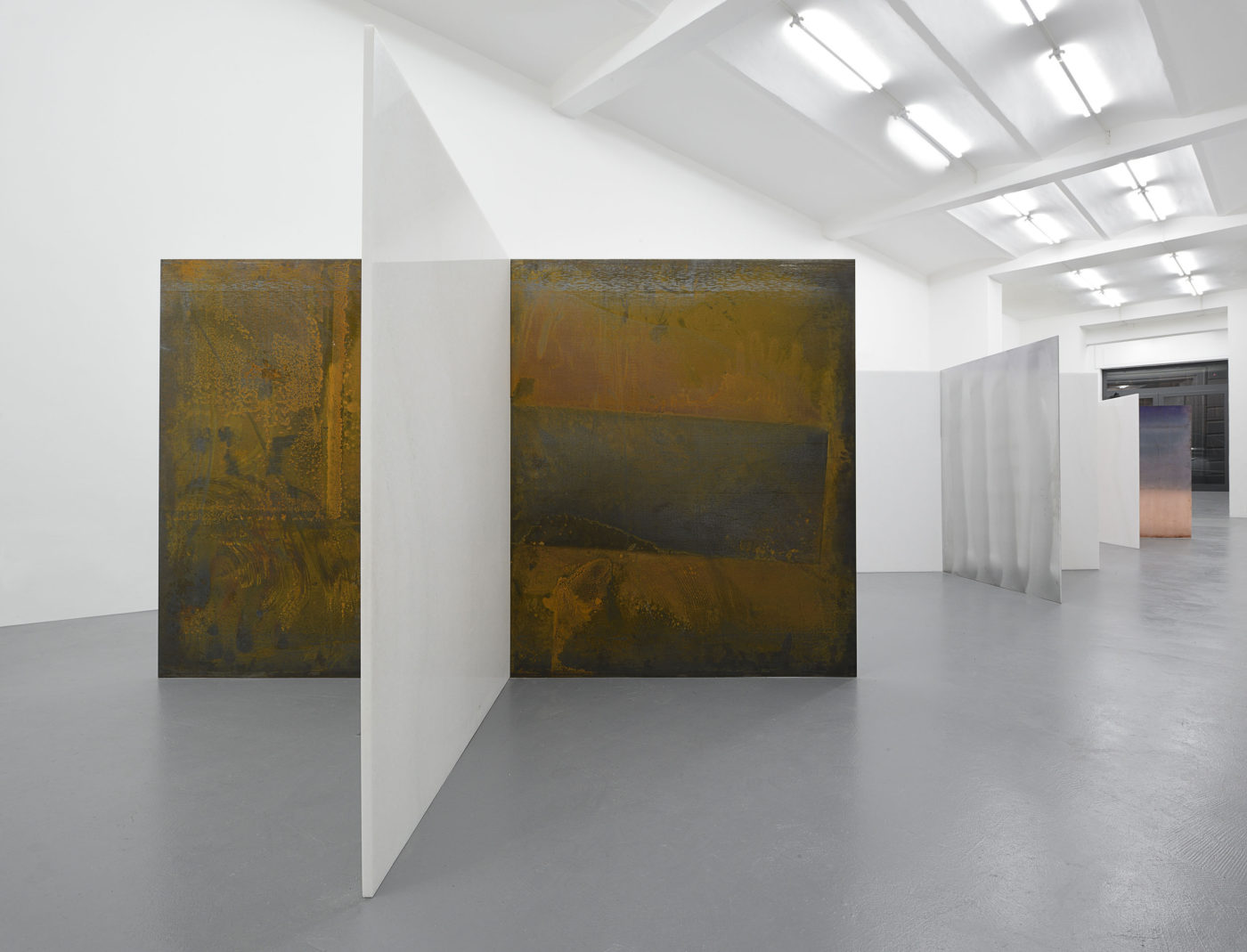 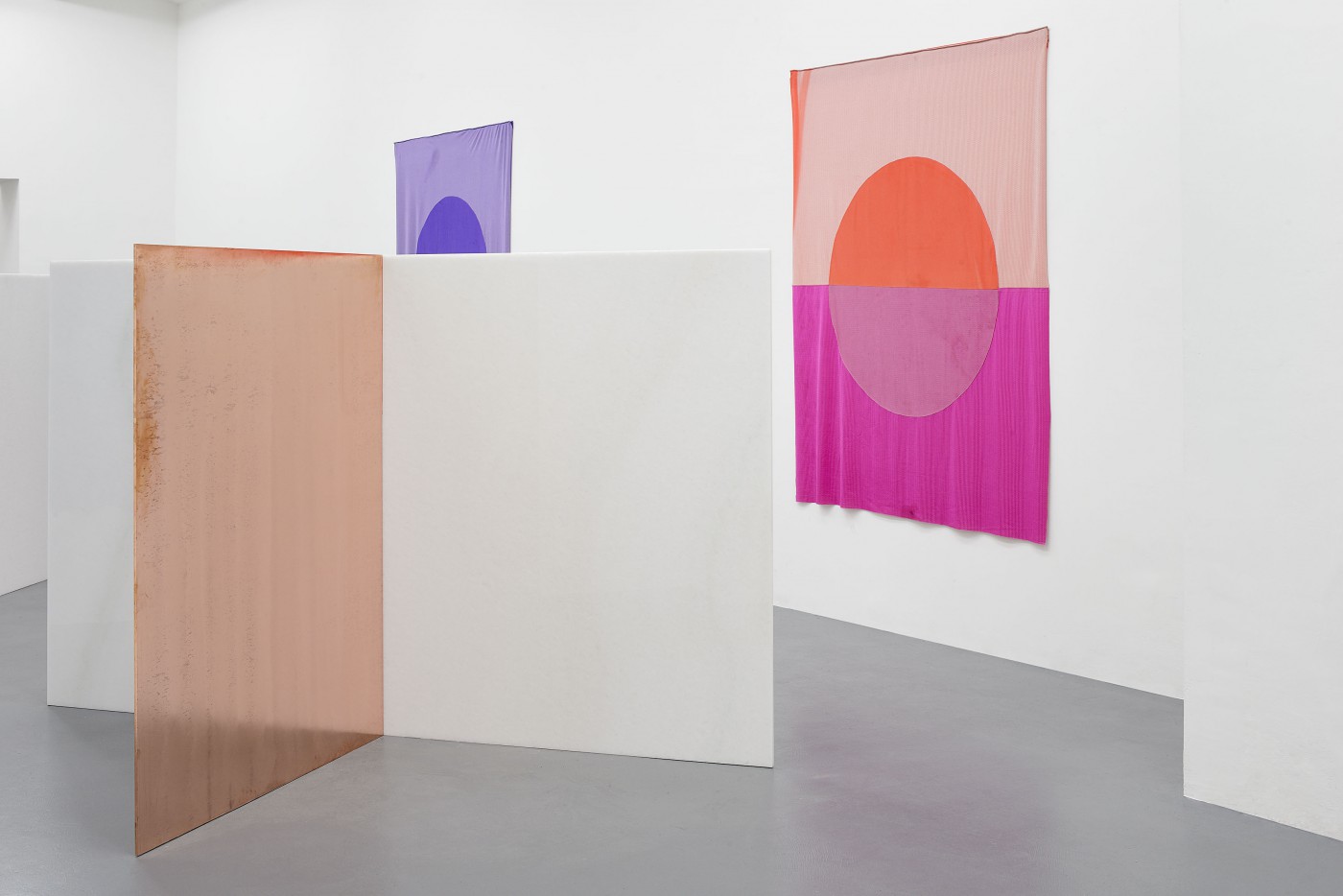 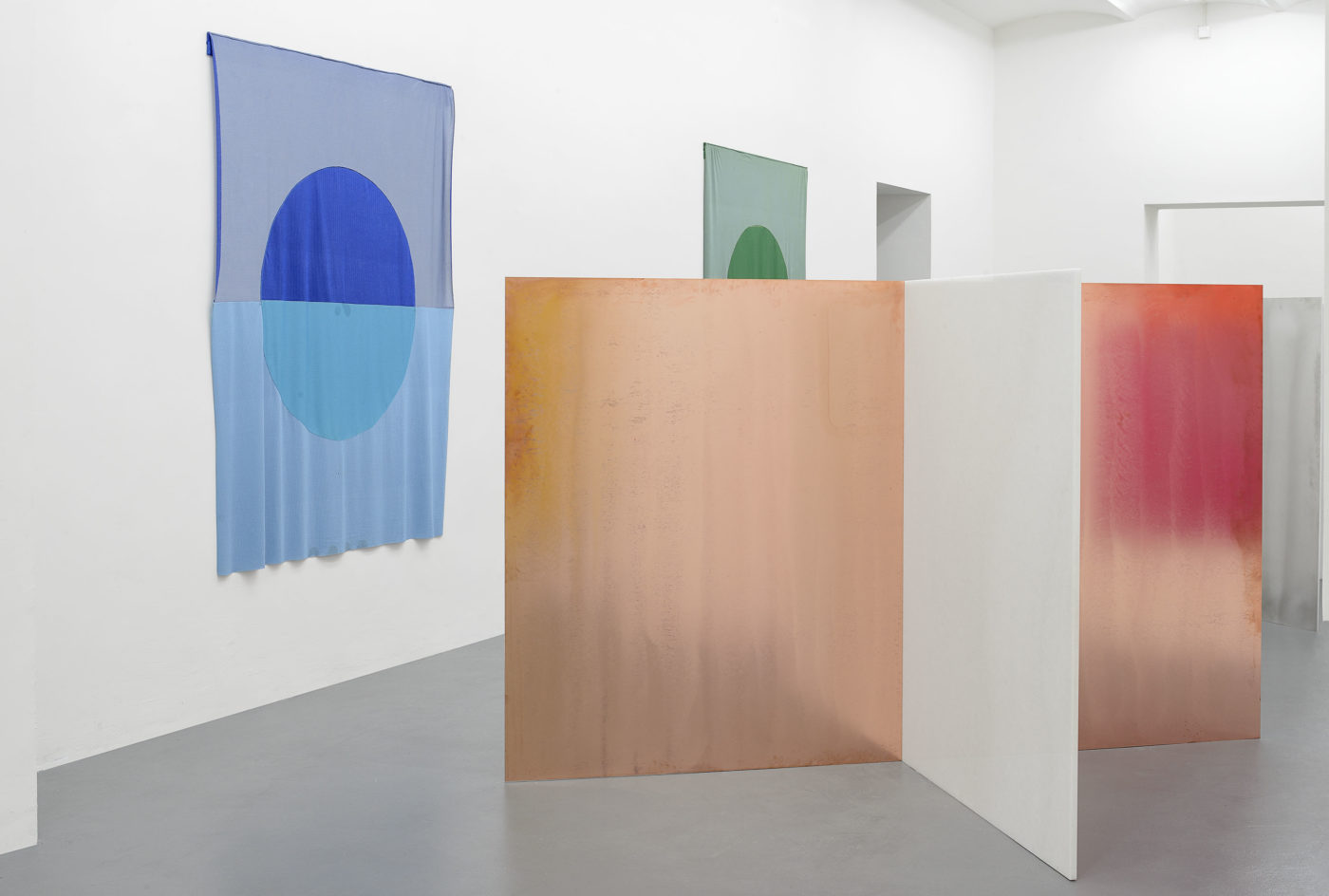 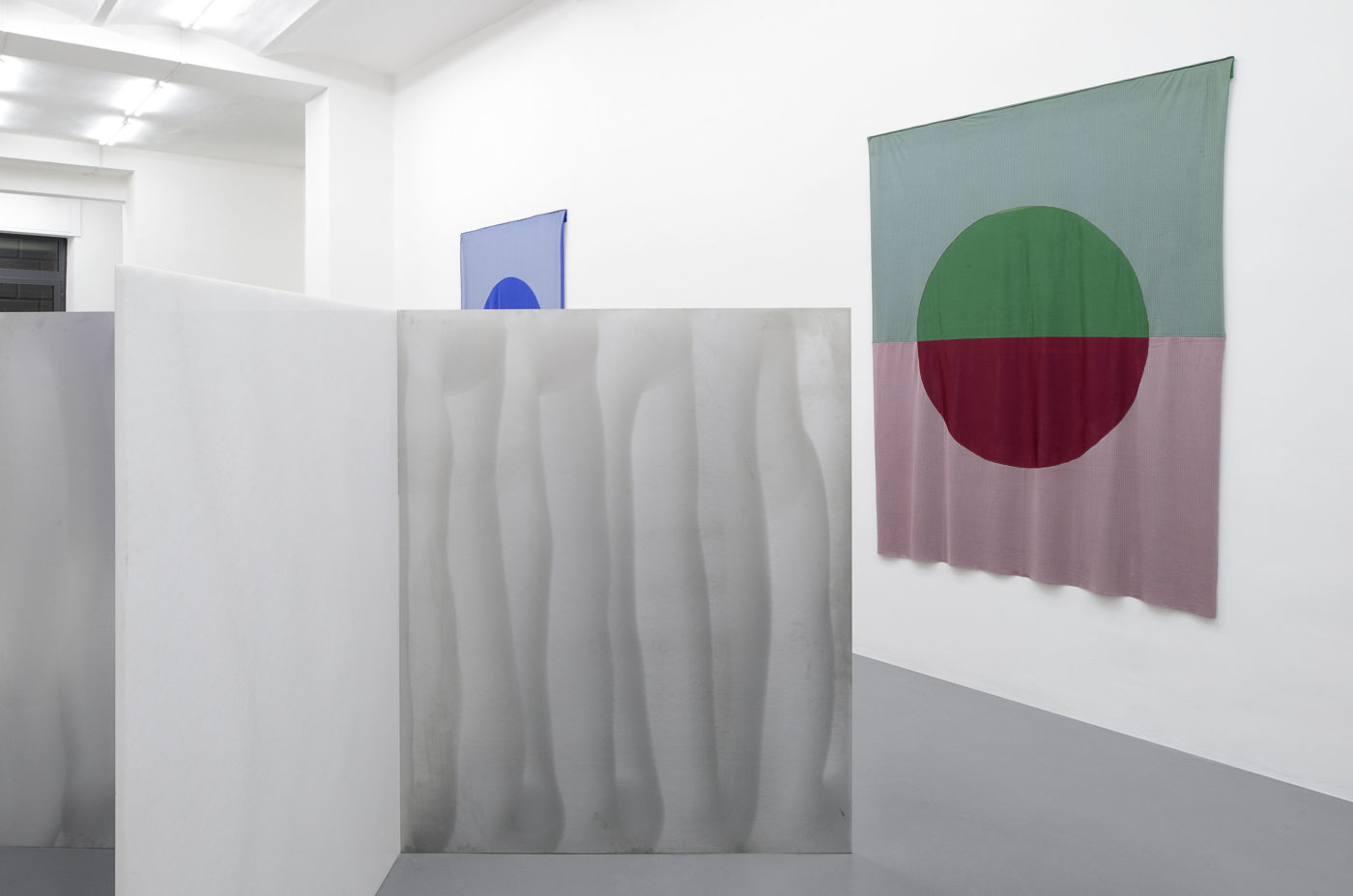 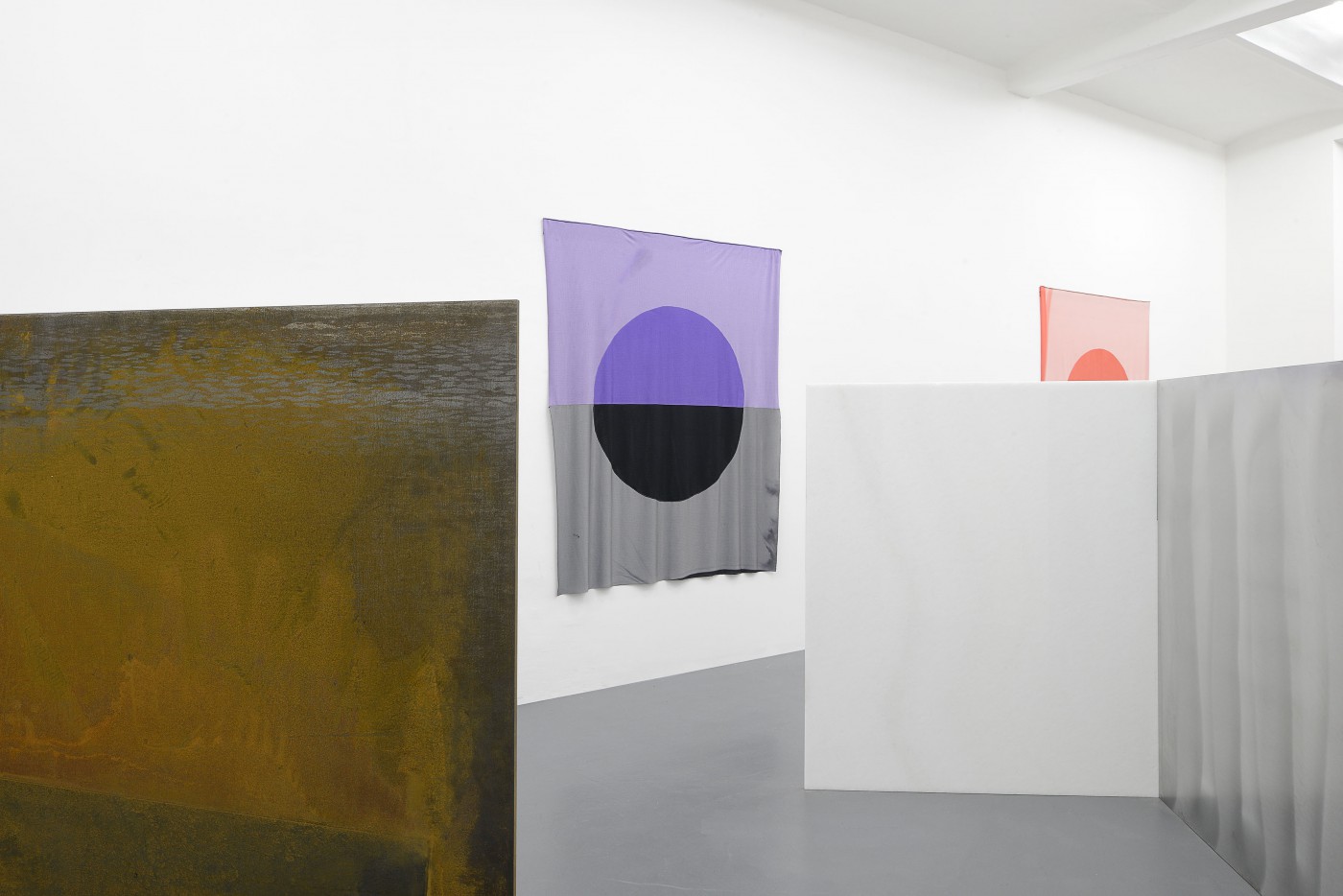 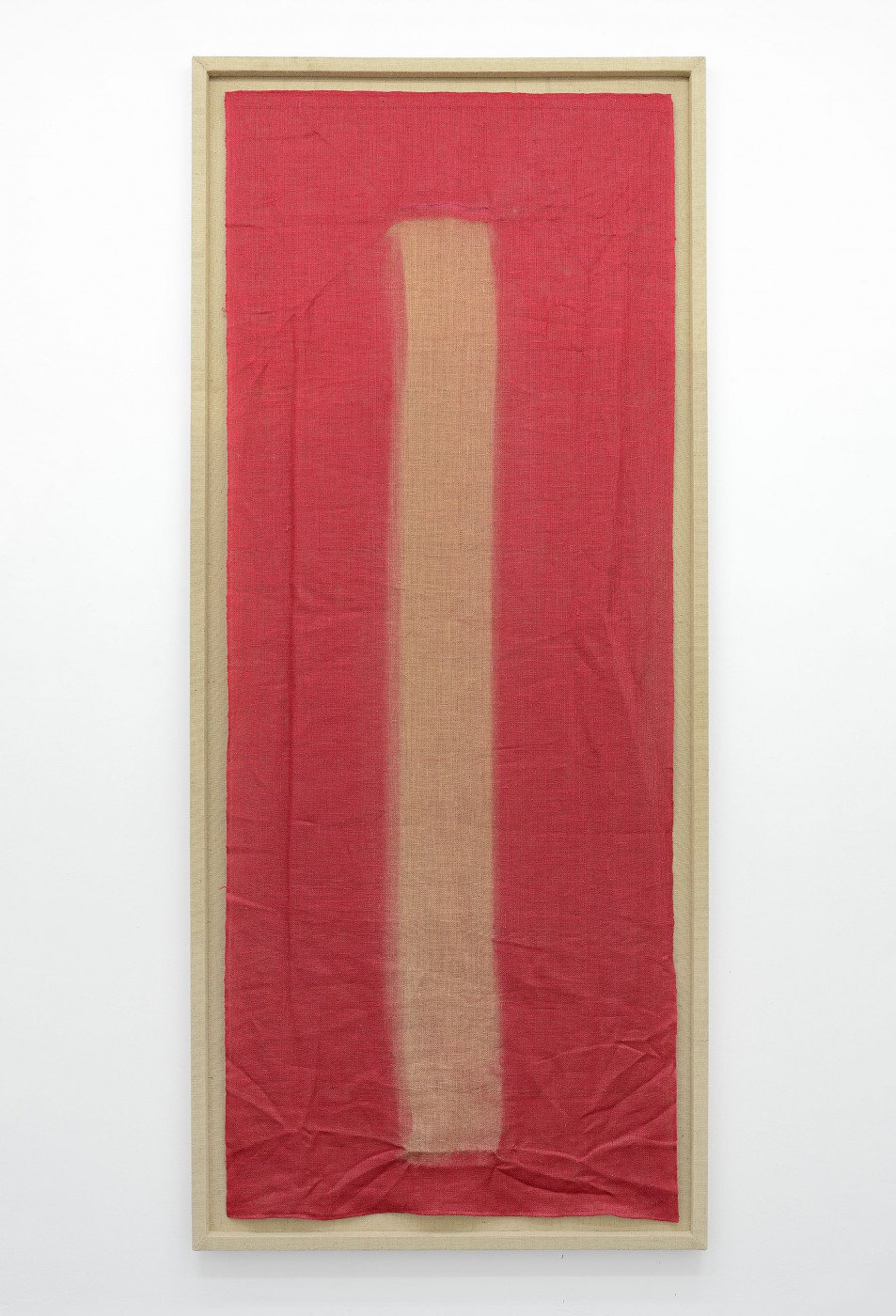 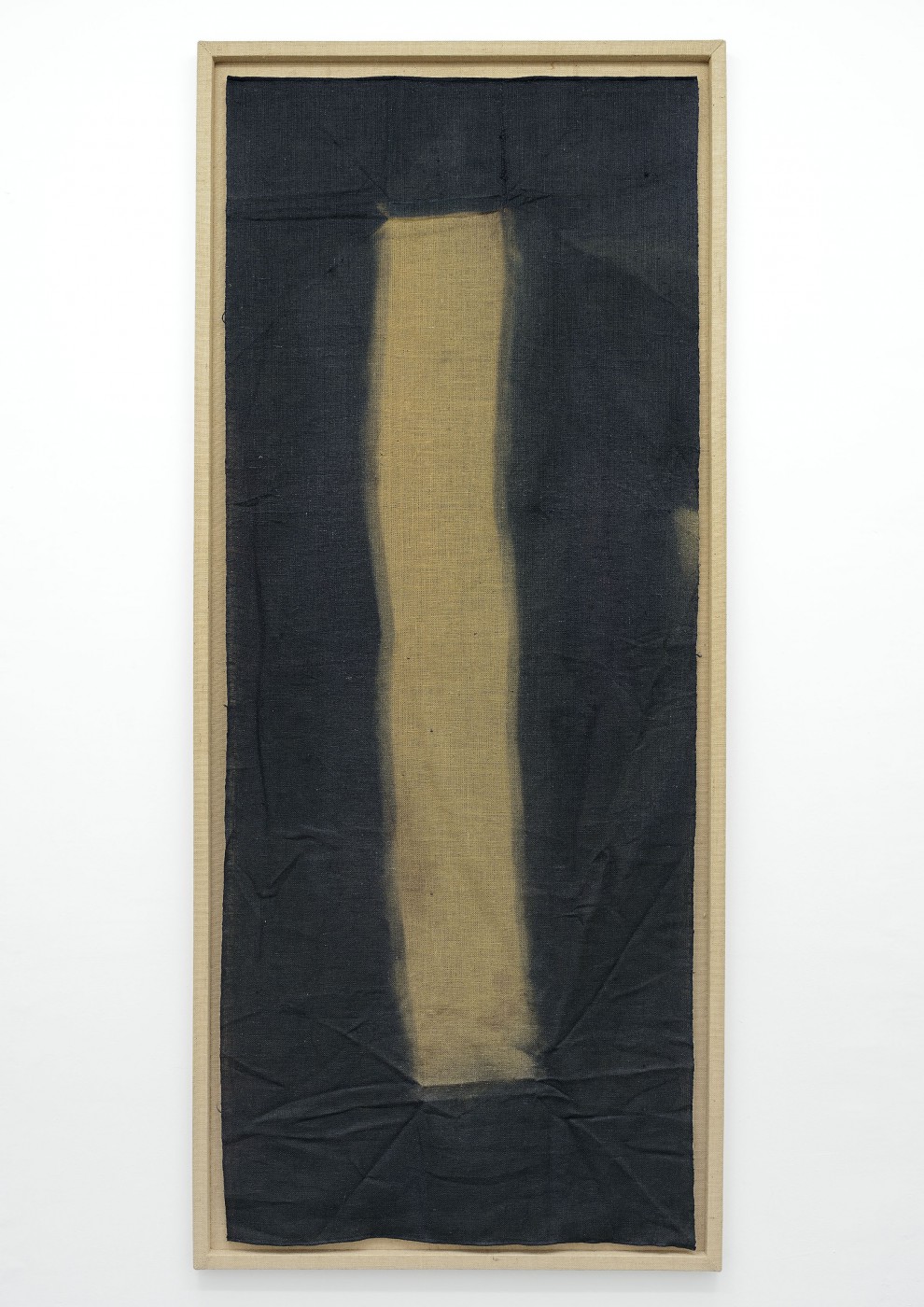 “The work for this show is in three parts, beginning with the triptych in the center of the exhibition. The catalyst for these marble and metal sculptures was the cemetery, walking around and Peré Lechaise in Paris and encountering old gravestones – the older the date of death, the more stained blue and green was the granite or marble by the oxidized bust on top. Furthermore, tombstones like much of public sculpture, used to be treated and honored as an art form, like fountains, now cast a bit into the realm of unacknowledged craft yet as meaningful as the works in a museum to all, and personally immeasurable. The material thus comes from my interest in marking time passed visually, to start with a clean slate as the outdoor works are here in the gallery to later grow and change via oxidation in the air and weather. The porous white marble which from northern Italy will inherit the stains from each respective metal, the blue and green from copper and the orange and browns from the corten steel, while the aluminum element does not oxidize and therefore this marble will not change and serve as a constant by which to measure the time passing in the other two elements of the triptych. Not only do we see an image of time passing in the stained marble, but a picture of space – how these materials depict age in a unique environment, just as the humans observing them will. They are undeniably melancholy sculptures meant to encourage our understanding and acceptance of aging, of death, and its inherent beauty.

The forms of the sculptures spawn from my interest in minimalist art and architecture, a seamless and perfected design with simplicity yielding structural integrity, while now trying to expose a more organic and natural openness to time and emotion. Along this exact line comes the burlap wall works which have come to being more directly from my study of Donald Judd’s life and works in Marfa. When visiting his home in Marfa after the concrete and aluminum artworks at the Chinati foundation down the road, one notices of course the translation of his sculptural forms into his furniture and bookshelves, matched now with function and softer materials, namely wood. I respond much more to the furniture than the artwork, the sense of life held within the design that the artwork feels almost intentionally to block out. So anyway, I made my own Donald Judd bookshelf with my wife Erin in Topanga, CA. when we moved there two years ago. Then when we moved to Venice I saved the wood but decided to employ the broken down bookshelf for art rather than life. So by wrapping colored burlap around the wood I was able to make these negative images with sun-light of the 2×12 inch beams, the same as what Judd used to build his library in Marfa. For me it was interesting to re-purpose the bookshelf, a common piece of furniture, back to art and return the wooden planks back to their original shape and function less useful physically but perhaps more useful now mentally.

The jersey pieces were made at my house in Venice as well. When we first moved there I placed the jersey panels on our roof and let them fade completely over the course of almost a year. We live about one mile from the ocean and can’t see it form our house but I was able to see the Pacific and the sunset from our roof. So these works relate to this proximity to the horizon and the unique view to which they were privy to for a year. By sewing two panels together and flipping the cut-out center circle, we’re able to see this passage of time, the daily setting of the sun into the ocean abstractly measuring our movement day to day, or year to year, toward the end, in color.”