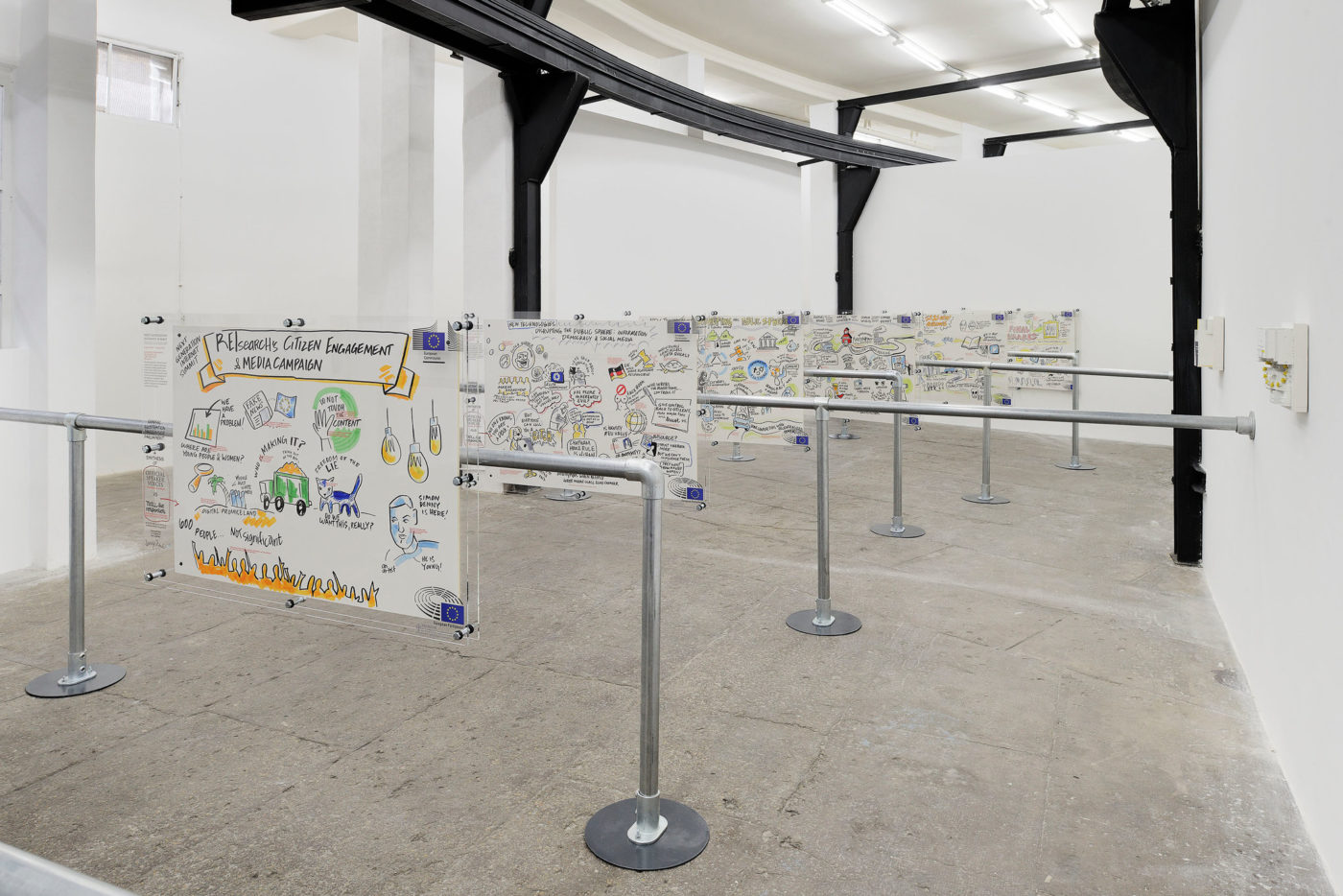 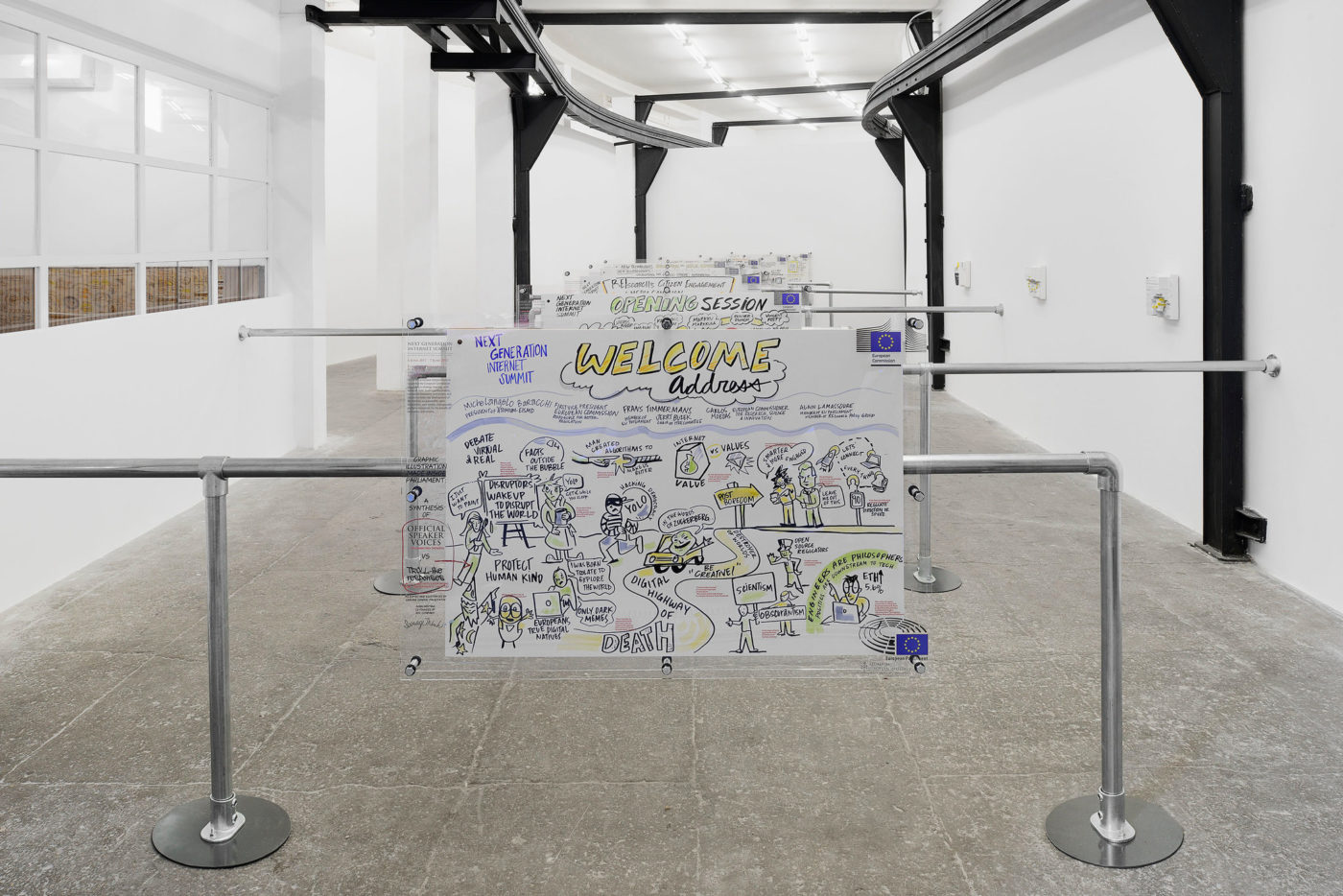 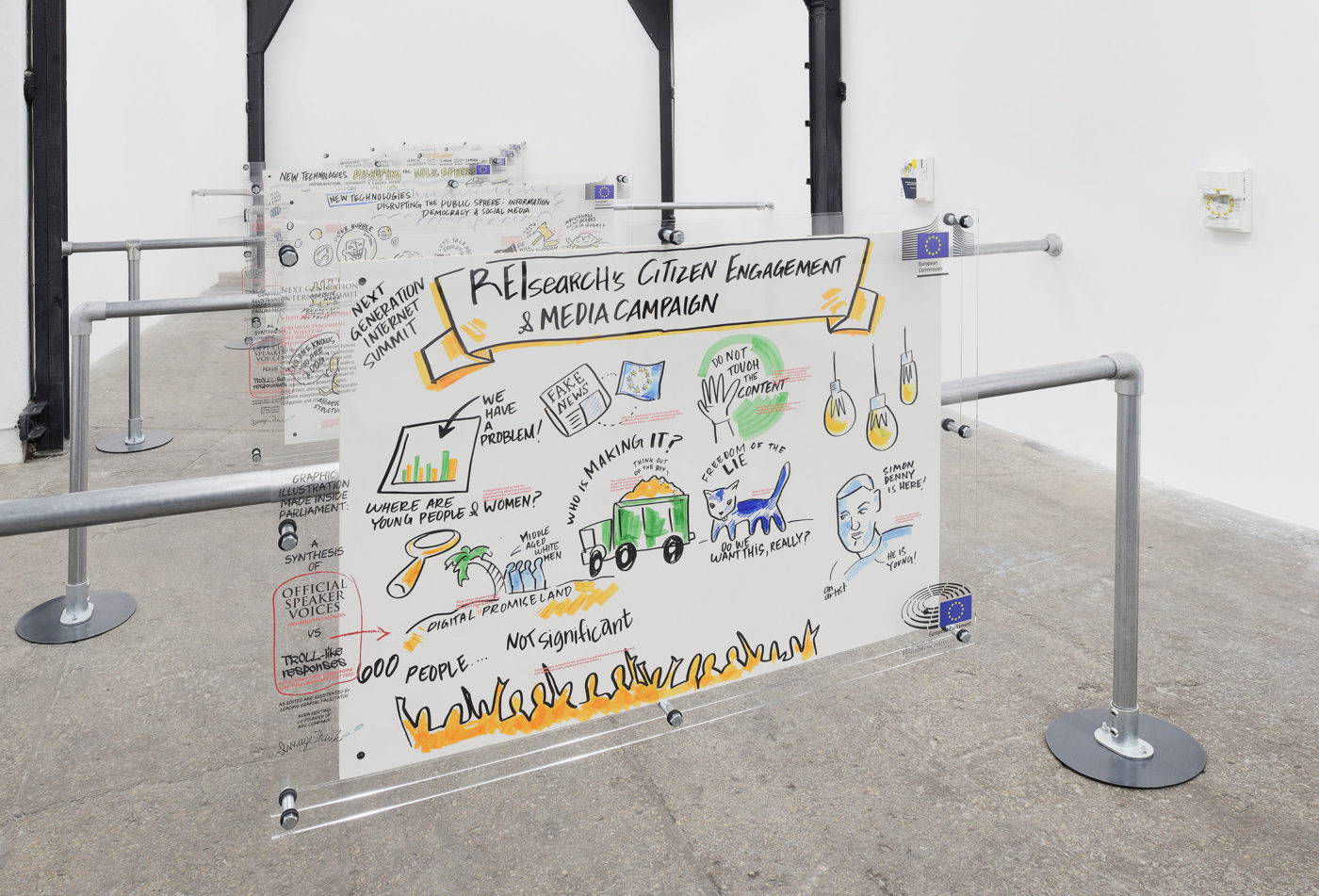 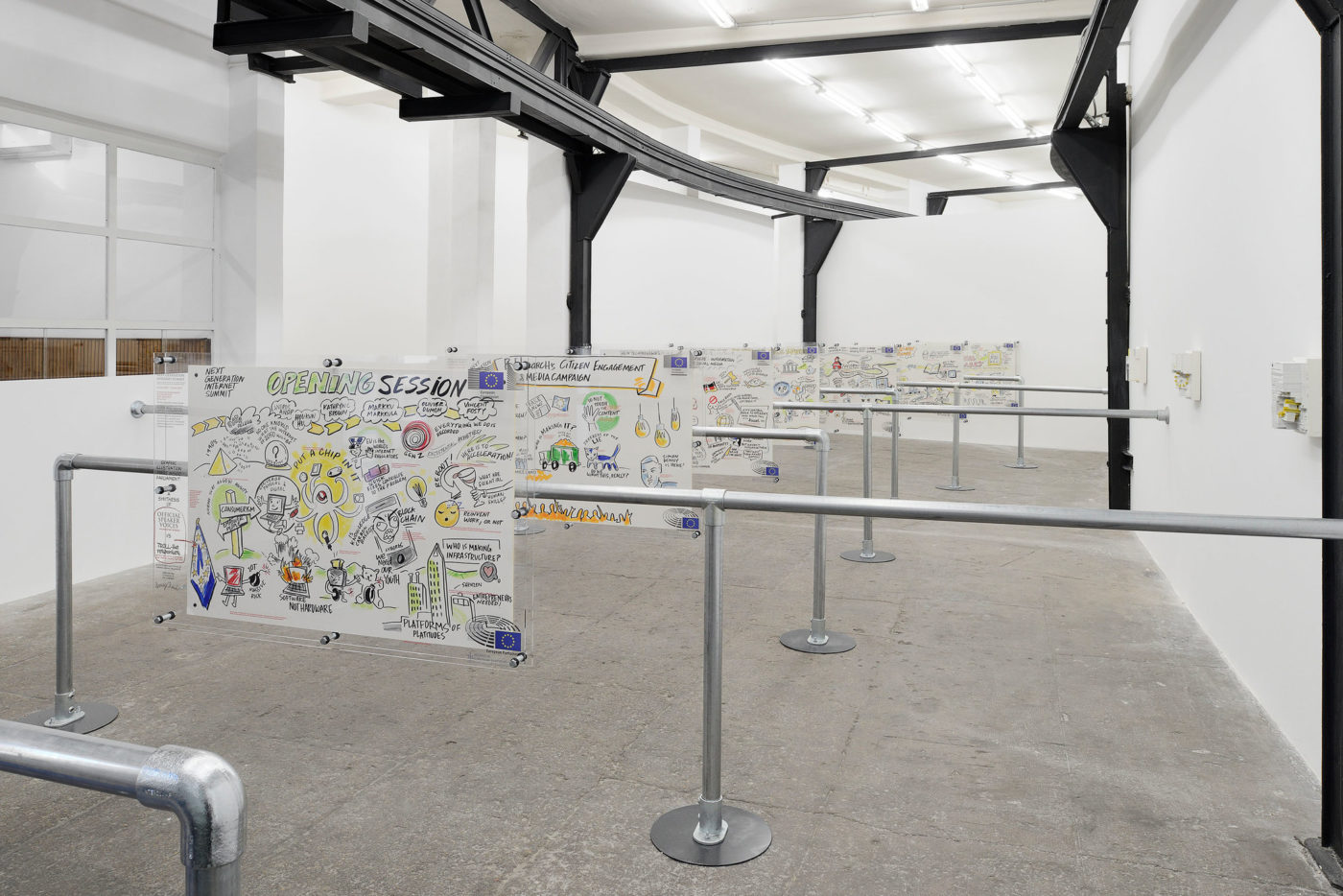 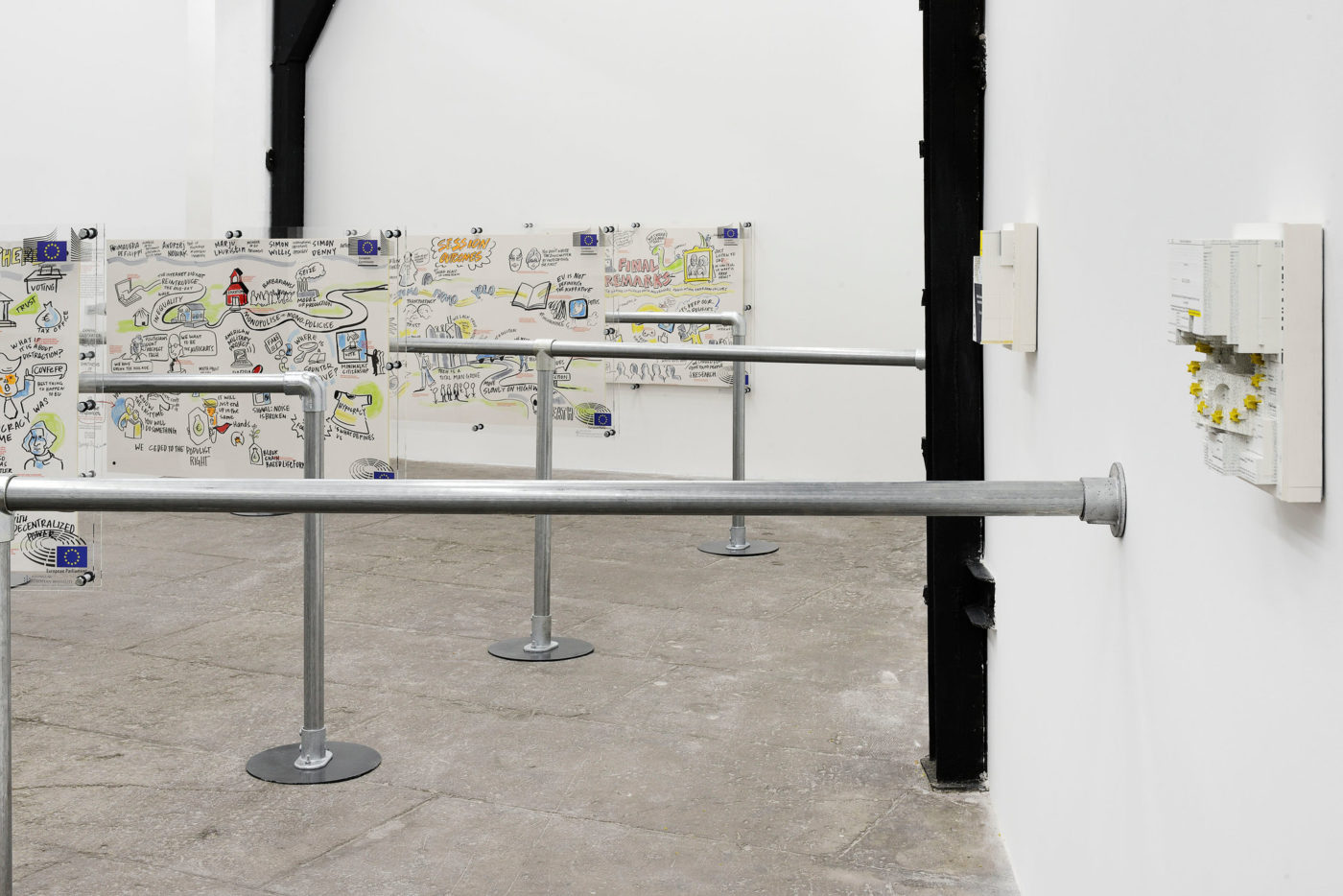 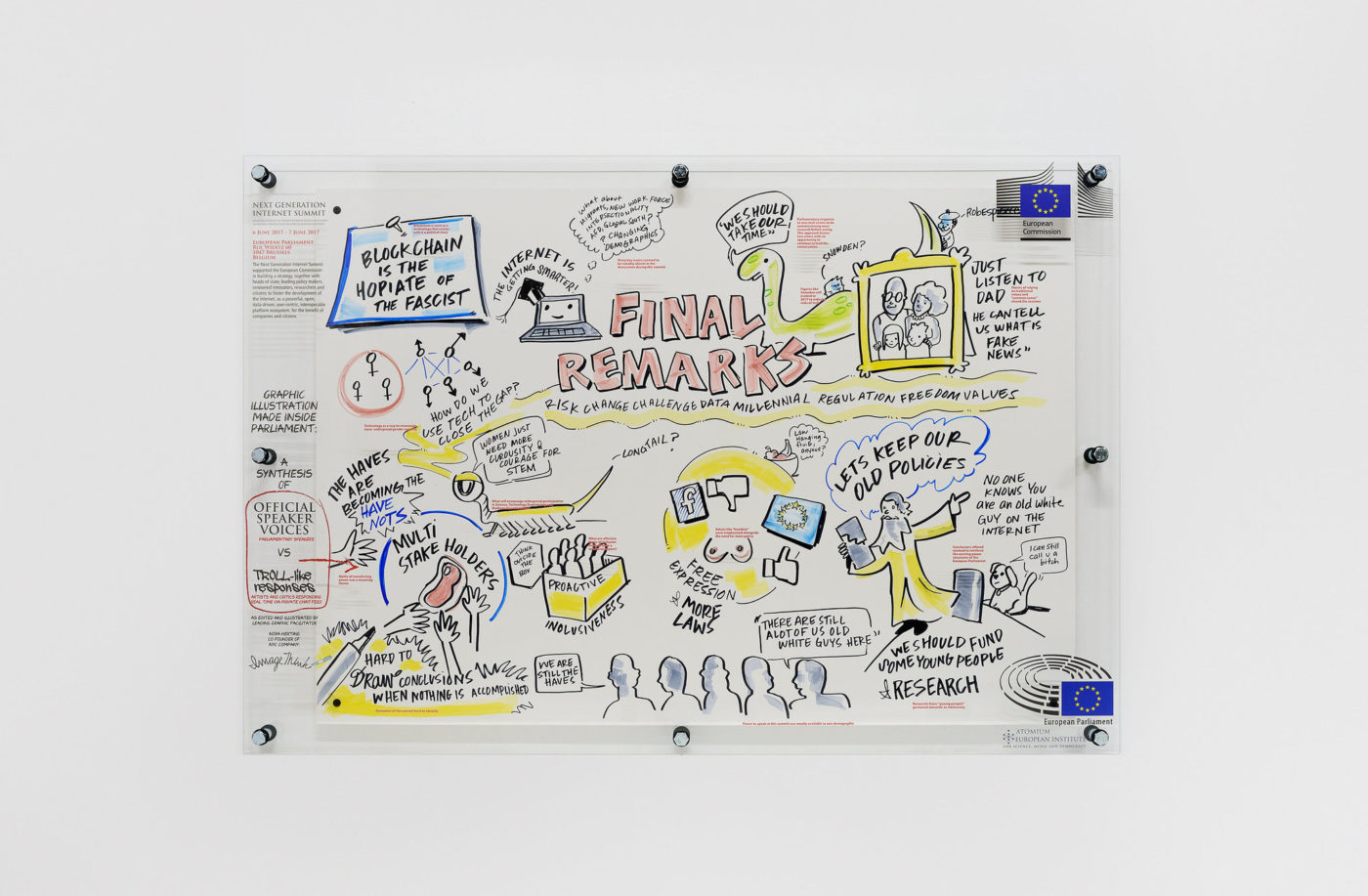 T293 is pleased to announce our fourth exhibition with Simon Denny, who’s first exhibition at the gallery was over 10 years ago in 2008. During this period Denny’s artistic projects have continued to unpack social and political issues related to the expansion of the internet – interpreting and reflecting the messaging and aesthetics of both, internet businesses and state actors as this core infrastructure has come to dominate global communication and influence politics and society.

Regulation brings together two groups of artworks made between 2017 and 2019; both sculptural responses to the European Union’s attempts at influencing governance and regulating data practices on the internet. The artist sees the EU’s attempts to push back on the power of major platforms like Facebook, Google, Amazon and Apple as unique – with no other meaningful attempt by foreign state entities. Both bodies of work perform poetic interventions into the EU parliament’s regulatory activity. The artworks utilize drawing, performance and print.

A series of felt tip drawings simultaneously documenting and critiquing debate sessions inside the European Parliament in June 2017 are displayed throughout the gallery on a series of tension-like railings. Produced inside the Parliament’s “Next Generation Internet Summit”, the works were collaboratively composed with NewModels.io co-founder Caroline Busta, datasociety.net researcher Matt Goerzen, artist Daniel Keller and illustrator and imagethink.net founder Nora Herting. They use a genre of live drawing common to session documentation at tech conferences, yet question the parliamentary talks presented rather than simply illustrating their key themes.

On the wall are three new paper reliefs produced using a now-outmoded 3D printing technology developed and used during the mid 2010s. The machines used to produce these artworks were designed to turn stacks of A4 paper into small 3D prints, by cutting, gluing and stacking sheets of paper in an automated process. The artworks are produced by feeding GDPR EU privacy regulation documents into these machines and “printing” 3d shapes based on the Parliament’s GDPR (General Data Protection Regulation) symbol – a padlock with stars surrounding it. The artist then reworks these printed objects by hand. Part document, part collage, part wall relief, part 3d print, these works layer language of legal documents and data privacy on top of each other in bureaucratic stacks, forming a kind of 3d concrete poem of legalese and data.