An exceptional collector of textiles, Seth Siegelaub described their special role in the history of humanity because of their unique dual character: fragile to the natural elements and human use, at the same time resistant and durable, textiles became vehicles of communication through the narratives and cultural values embedded in their motifs.

A collector of textiles in turn, gathered on several travels to Asia, Isabella Ducrot is primarily intrigued by the structure of the fabric itself, where its essential duality originates: the interweaving of opposing elements – weft and warp – which gives an unpredictable strength to the individual threads, making the fabric resilient, durable, bearer of a message. The recent textile works brought together in Opere a ripa, a name that evokes the ancient Roman river port and its symbolic meaning as a place of exchange, take the form of female dresses, emptied of the body, flattened like tailor models on which the artist painted different patterns. 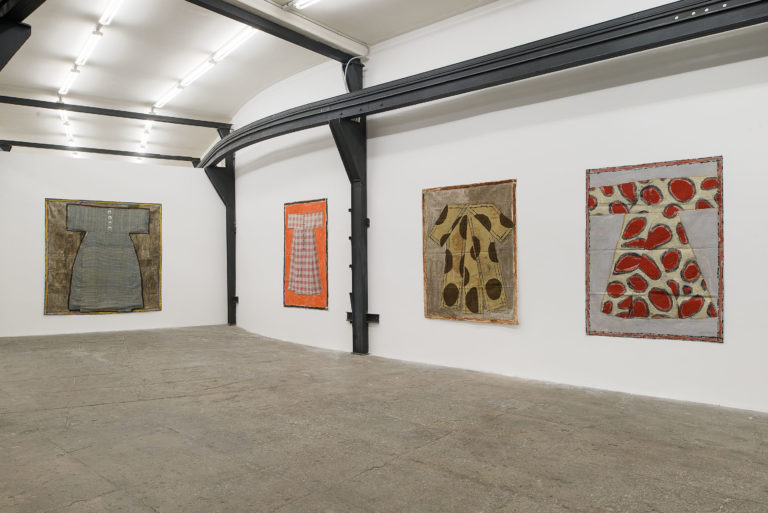 The Sceptical Structures of Max by Zimbabwean born and Amsterdam based artist James Beckett instigates a rudimentary examination of our built world to tease out ways in which industrial production is the result of and subsequently influences our behaviour.

The exhibition mines Beckett’s skill of compounding study with material use in intensively diligent yet open ended ways and that leads to new pathways in the language of exhibition presentation. Yet despite the former, at the core of Beckett’s exhibition is something mundanely normal: chipboard. Punctuating the exhibition are a number of extended captions, mimicking information tropes synonymous with cultural history museums, and through them we learn of Max Himmelheber, the mastermind of chipboard.

Himmelheber’s innovations contribute to an ongoing and ever prosperous yet cautionary tale of industrial production, both reflected and refracted in Beckett’ works that salvage chipboard from the streets. In their formality – including shape, volume and composition – the works are as much sculptural as they are painterly, with their diversions from wall to floor. The works’ material employment, which deal with aspects of ground and fore, house publications and artefacts, including a number of chipboard samples drawn from the Max Himmelheber-Stiftung.

As with a number of Beckett’s previous works, the installation delicately tows the line between revelation and complication, unearthing a wide net of potential uses and misuses of invention and industry, and their affect and effect on our contemporary society. 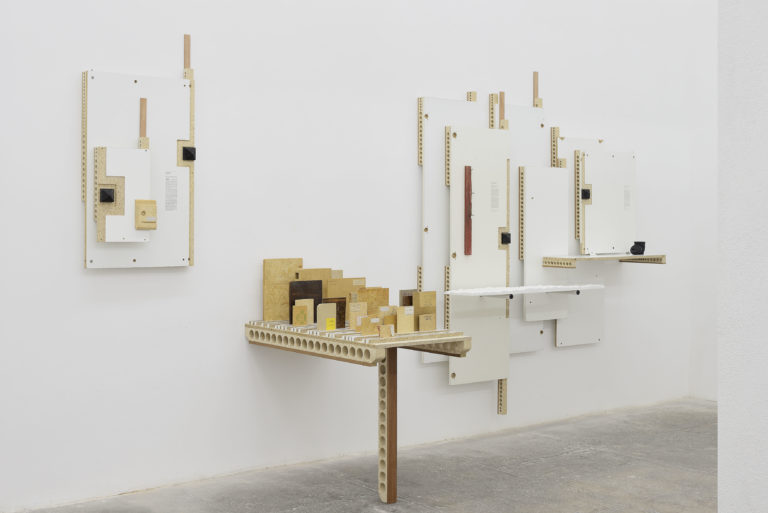 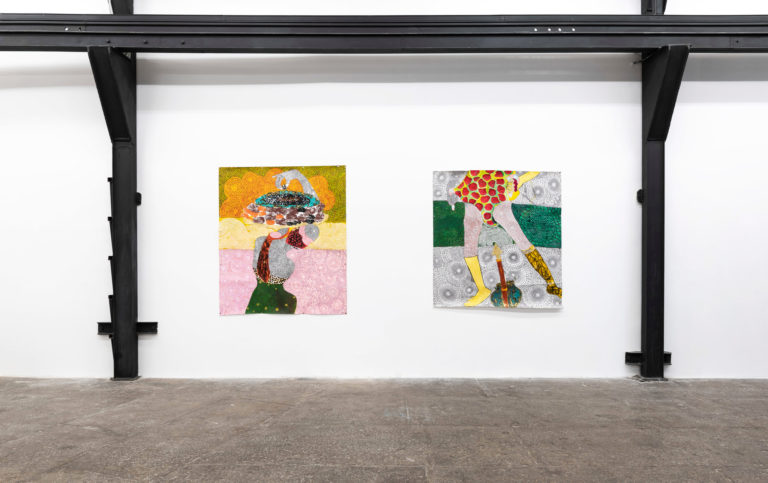 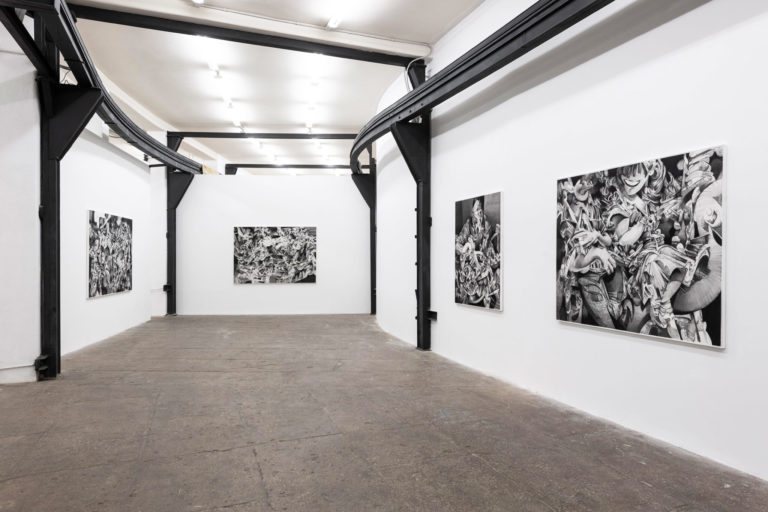 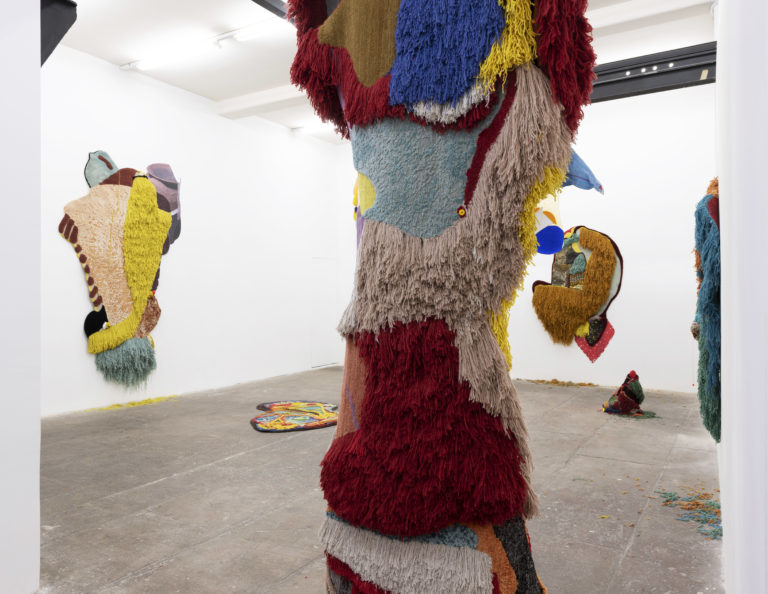 Hangama Amiri’s Bazaar actualizes its existence in our collective imagination. Granted, although it echoes a specific locale, the installation’s setting straddles the physical and the psychic. For while Amiri anchors us to a particular place through her use of language, the likeness of particular individuals and the materiality of the medium itself, the artist speaks to a transnational sense of belonging—extending far beyond the borders of Afghanistan.

Hangama asserts a subtle rebellion through her practice, aligning the audience with her pursuit simply through our engagement with the installation. The many voices emerging from a plethora of fabrics and scenes sing out as a unified harmony. Works such as Nail Salon #1 present a space for women, run by women, with details and traces of those who populate it literally sewn into the fabric of the space. Form, material and pictorial content are unified in Hangama’s Bazaar: not a reproduction, nor an empty shell, but rather a translocated home: a memory recalled, reconstituted and given. 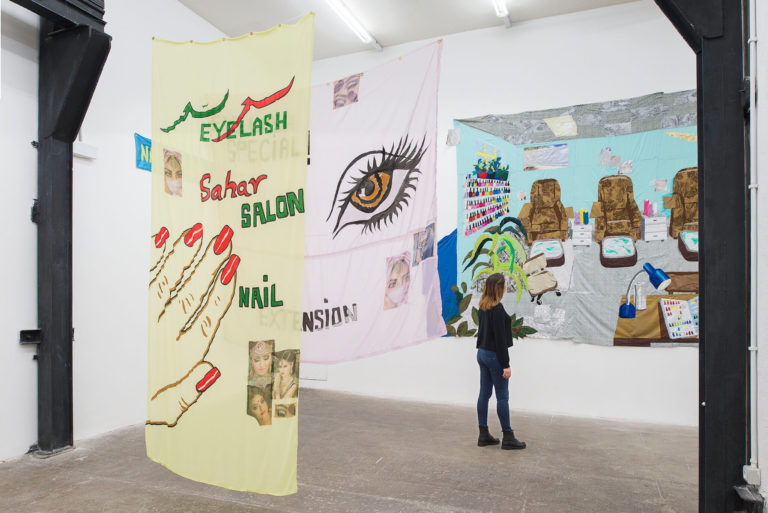