“If we accept that the shaman is that intermediary between the earthly and the otherworldly realm, between men and spirits, between the living and the dead, who, having entered into a state of trance, has the power to soothe suffering and cure diseases, to drive away evil spirits and guide the spirits of the dead into the afterlife, we should not be too far from the truth in saying that Si On is a shaman artist. To verify the relevance of such a claim, just visit Si On’s “grand drama” at T293.

Si On’s paintings and sculptures are materializations of something unrepresentable, incarnations of traumatic traces imprinted in her retina-unconscious. Through an intense process of work, almost in a state of trance, like a shaman, Si On seduces and captures in the liminal space of the work of art the spirits who visit her and all those unexpressed negative feelings – pain, fragility, anxieties and fears, caused by the inscrutability, absurdity and contradictions that human beings face in their lives – that Si On exorcises and buries, to then purify them and convert them into seeds for a rebirth.

Therefore, her art has a cathartic function: Si On leads the viewer back to the fundamental scenes of the Great Theater of the mundus imaginalis (whose cartography is masterfully traced in the painting I lived well), allowing him to look at the depth of things, acquire an overall vision of reality and transform into other forms of energy those dark emotions that could prove harmful to him.”
— Giuseppe Armogida 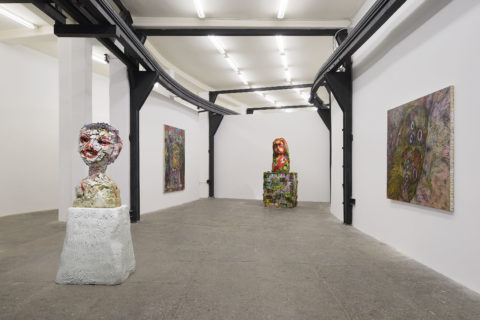