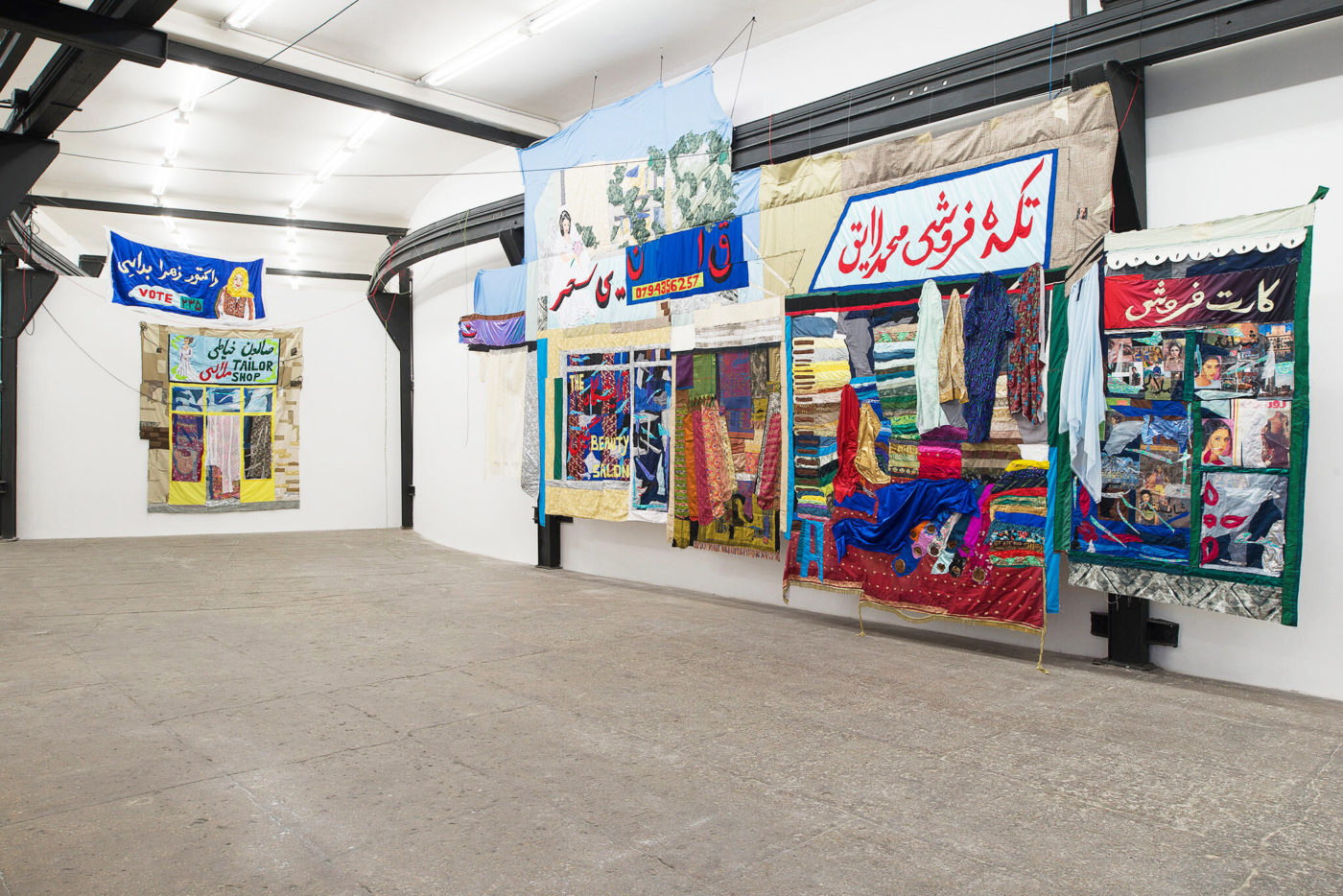 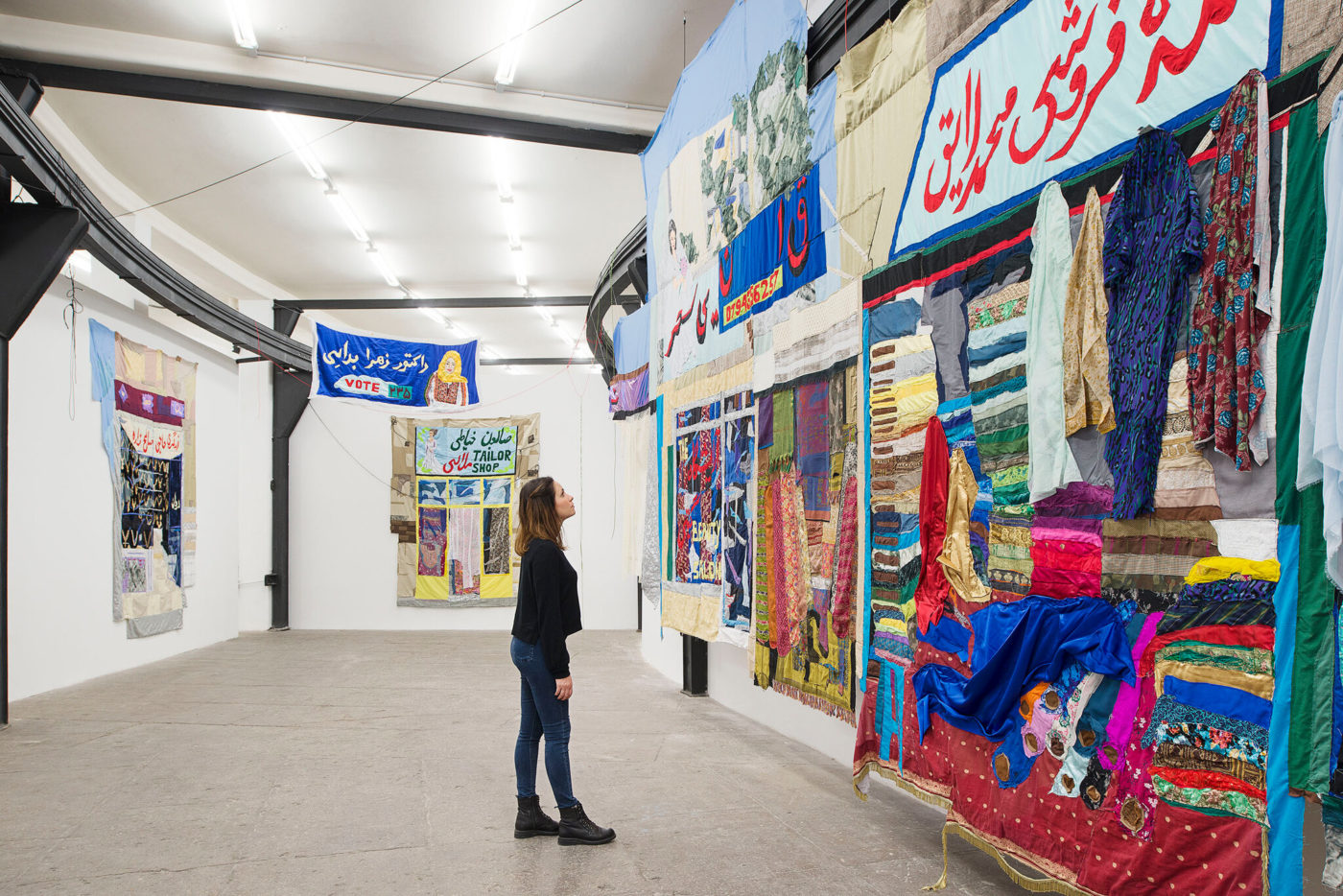 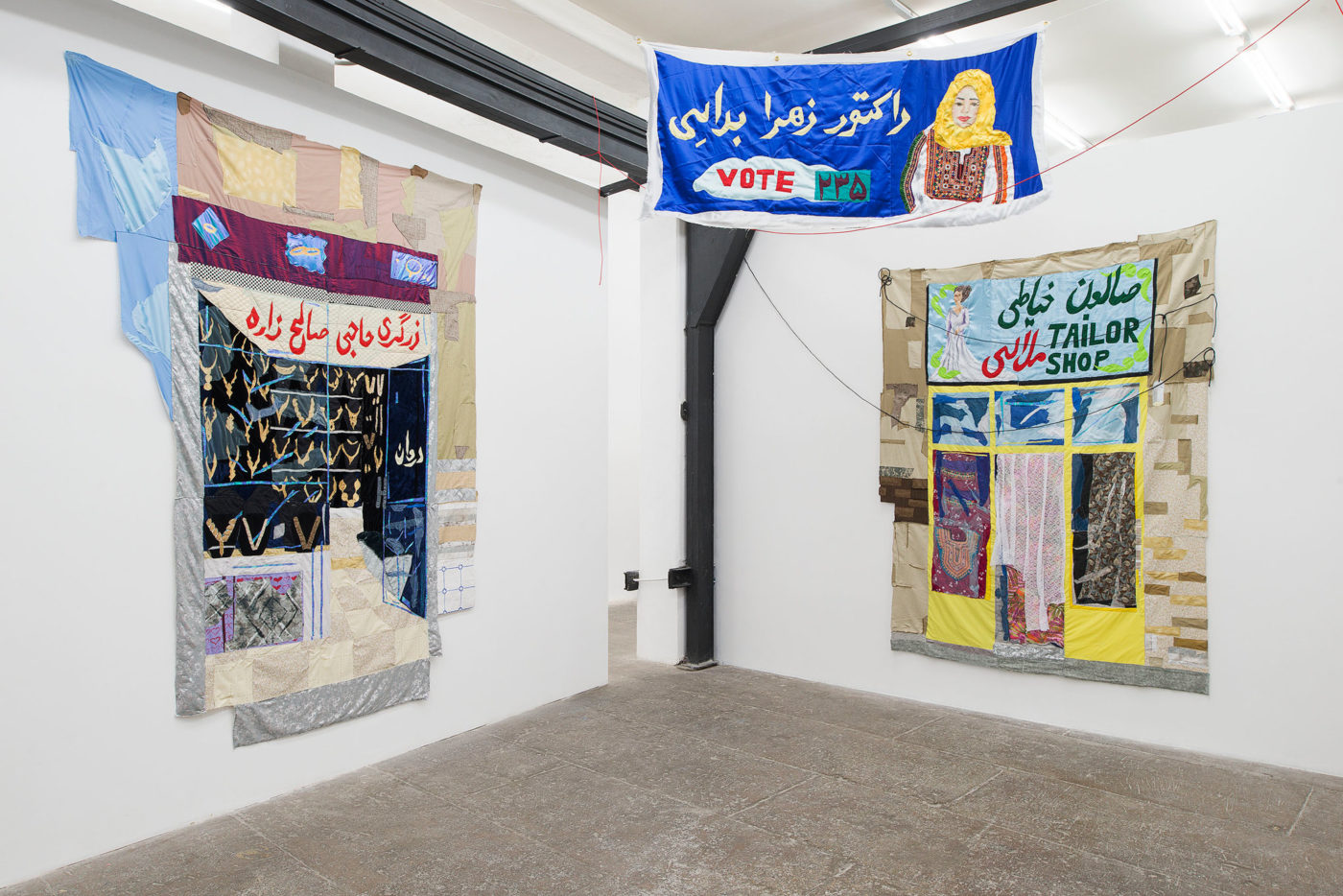 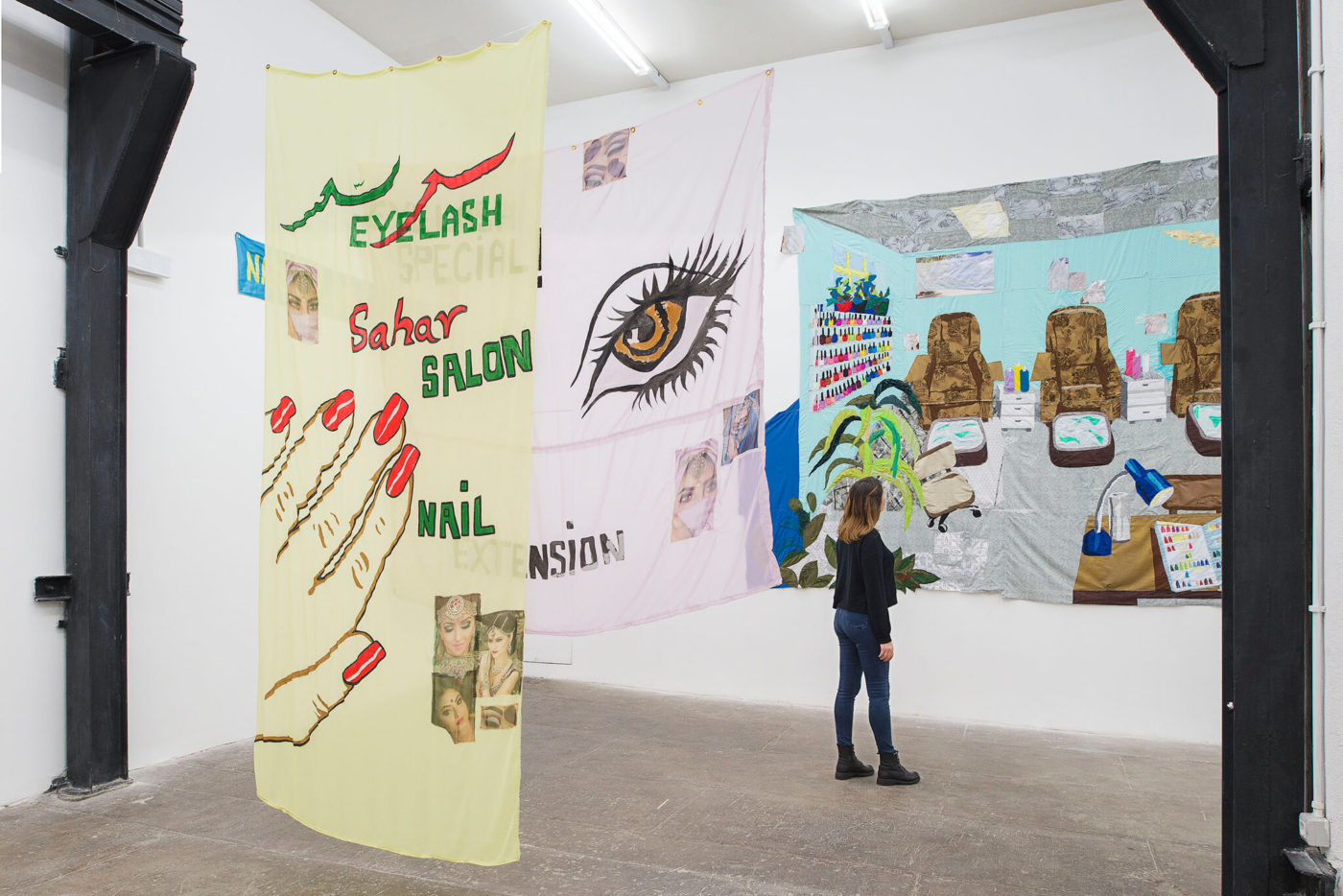 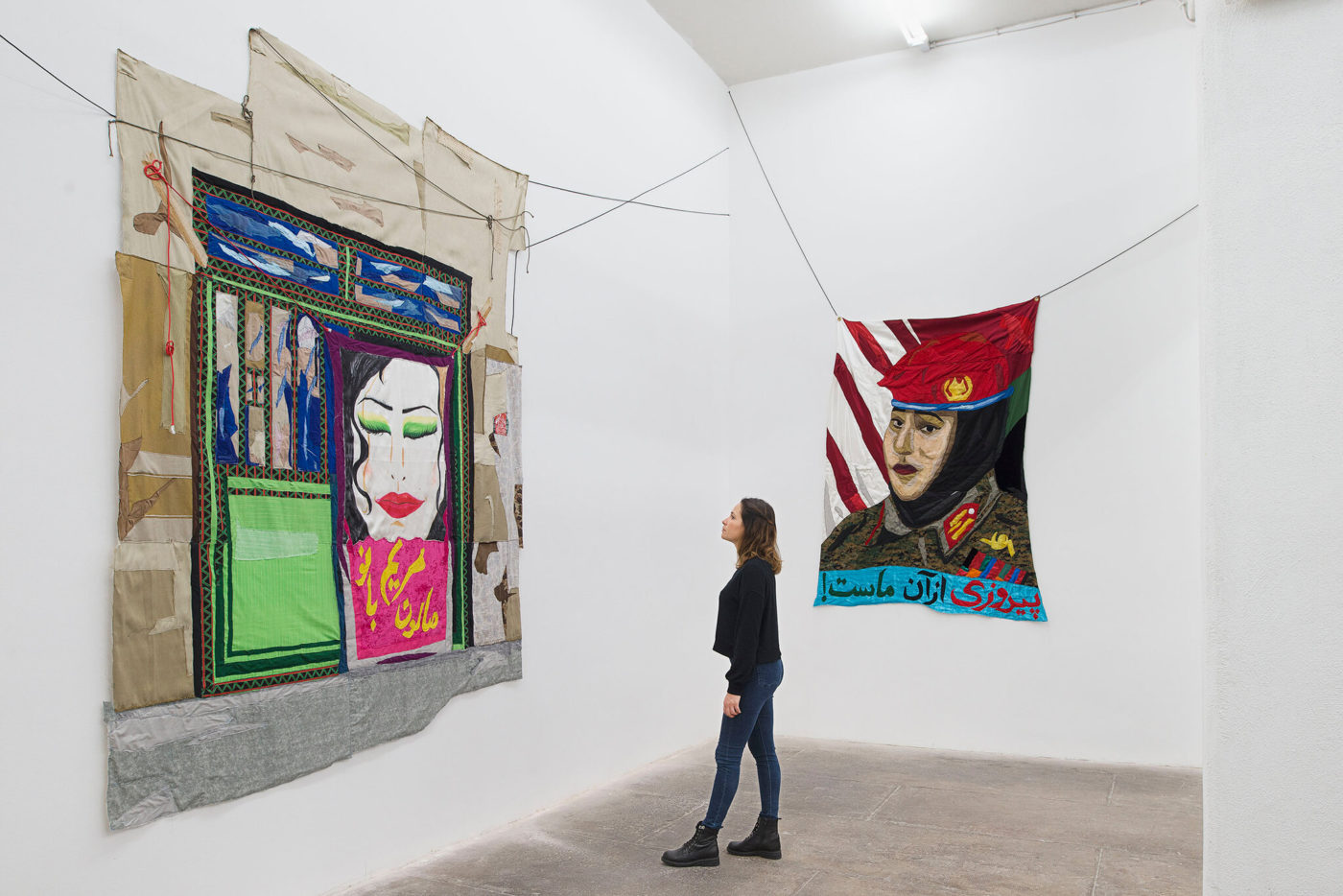 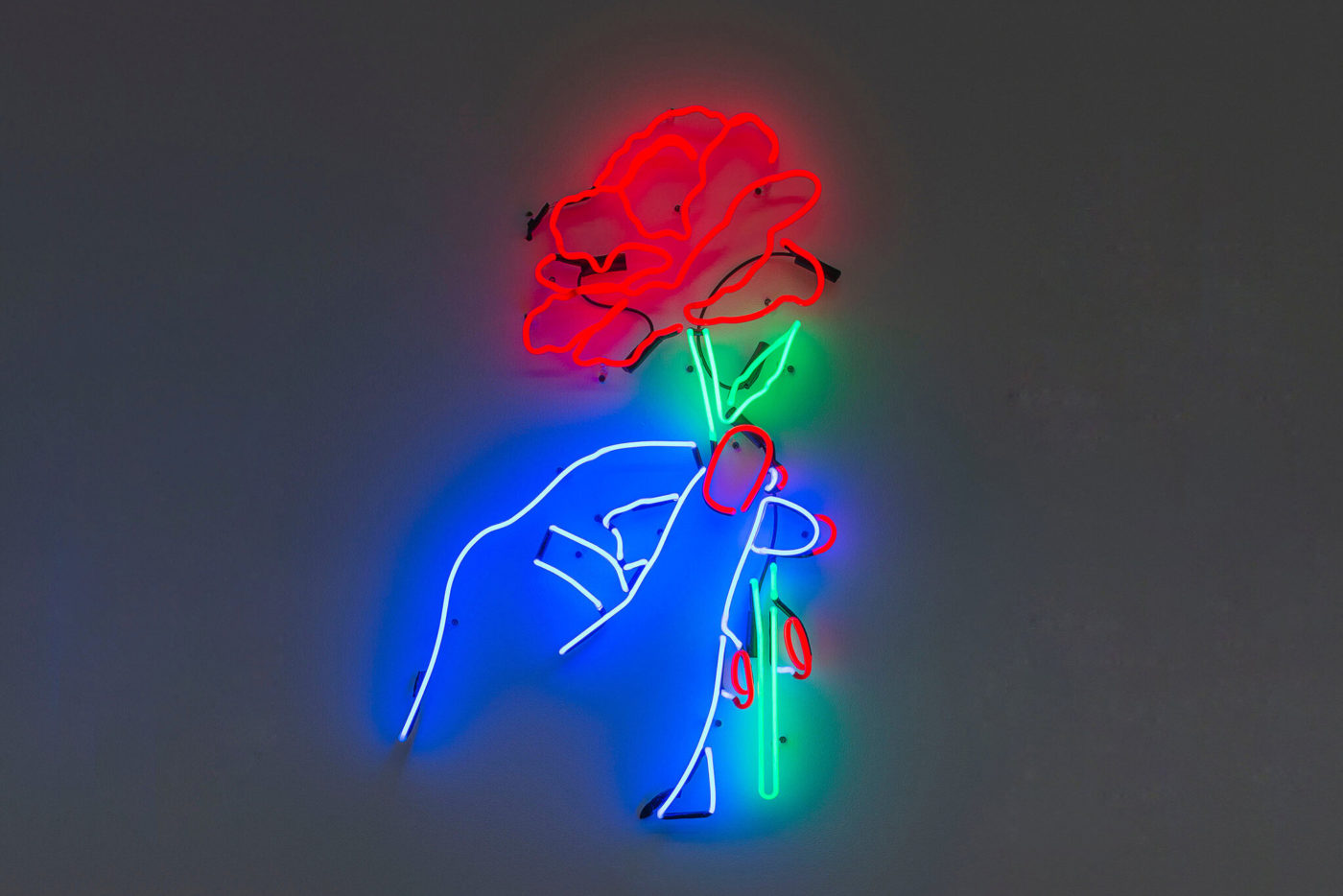 “In this project, I am re-weaving my childhood memories of the bazaar, transforming and deforming it to offer my viewers a sense of place and time alongside an awareness of the politicized present.” – Hangama Amiri

Hangama Amiri (1989, Kabul) is an Afghan-Canadian artist, whose work concentrates on topics such as feminism, geopolitics and gender. Pivotal in her artistic practice is the attention given to Afghan costumes and, more generally, to the Islamic culture. The aim of opening up a different point of view on Afghan traditions is a self-conscious position based on Amiri’s background. Having grown up in Nova Scotia (Canada) and being currently based in New Haven (Connecticut), she looks back at her native country, where she lived until the age of six, through a critical approach with the aim at celebrating the contemporary lifestyle of Afghan women.

During her childhood, the artist was used to wander through Kabul’s commercial activities with her female family members. Amiri recalls today that, although services and products were mainly dedicated to women, businesses were managed predominately by men. From 2001, after the fall of the Taliban regime, the country witnessed a significant social and cultural shift. In fact, a more meaningful feminine presence within commercial enterprises arose and women became owners of their jewelry stores, beauty shops, fashion and textile boutiques. Interested in a growing Afghan hybrid visual culture, and by evoking her personal diaspora, the artist re-lives this historical moment and her experience through her latest artistic project: Bazaar, A Recollection of Home.

For her first exhibition in Europe, Amiri rebuilds those commercial environments in the shape of monumental textile installations. By deliberately choosing to figure forefront women-dominated spaces, Amiri elegantly embroiders a poetic of social-political narratives. The viewer is invited to experience this re-constructed reality as flaneur – in the Benjaminian conception of the Parisian passages. Moreover, Amiri inserts depictions of Taliban-banned items, such as red lipstick, shiny fabrics and nail polish, to affirm the sense of freedom and power that Afghan women have reached by expressing their own sensuality, sexuality and pleasure.

By draping, stretching and folding different textile materials – such as cotton, chiffon, silk, suede or handmade Afghan embroidered fabrics – the artist creates a metaphor of fragmentation: on each piece we can find an assemblage of identities that have lived in multiple geographies throughout the world. Amiri creates a space of other or, as defined by French philosopher Michael Foucault, a Heterotopia. The term is used by Foucault to describe spaces that have multiple layers of meaning or relationships to other places and whose complexity cannot be seen immediately. Under this understanding, Amiri’s message takes new directions and involves different realities. The varied and colorful fabrics are the tools to introduce her socio-political discourse.

The exhibition Bazaar, A Recollection of Home explores different topics: politics of globalization; consumer exchanges between the East and the West; social and gender norms within the Afghan bazaars. Amiri extends the works to wider layers of significance, with the aim at celebrating women’s presence in an environment dominated for a long time by men. By making use of her childhood memories, the artist gives voice today to Afghan women and aims at expanding the dialogue on what can be contemporary Afghan feminism. 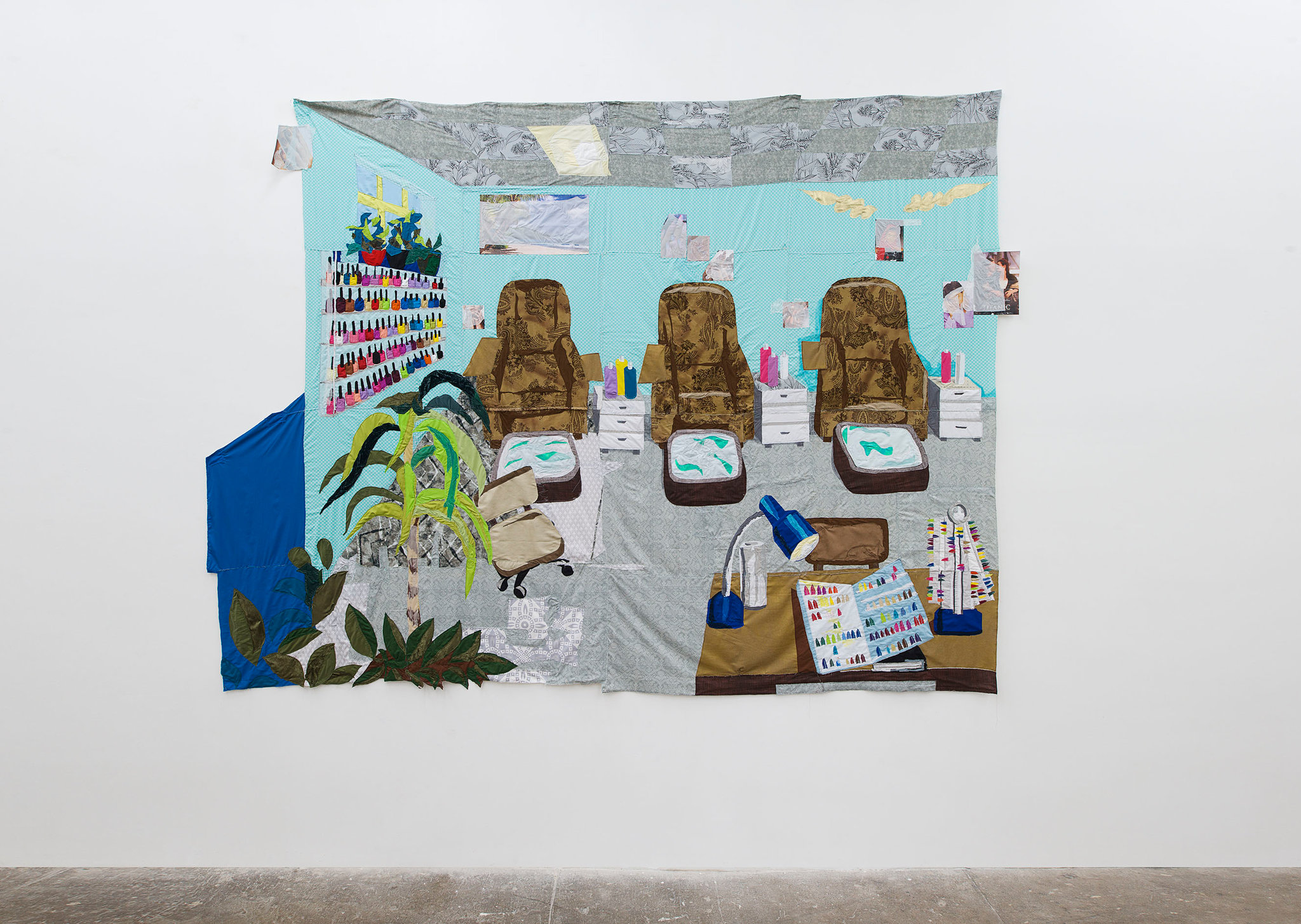 “Hangama Amiri’s Bazaar actualizes its existence in our collective imagination. Granted, although it echoes a specific locale, the installation’s setting straddles the physical and the psychic. For while Amiri anchors us to a particular place through her use of language, the likeness of particular individuals and the materiality of the medium itself, the artist speaks to a transnational sense of belonging—extending far beyond the borders of Afghanistan.

Hangama asserts a subtle rebellion through her practice, aligning the audience with her pursuit simply through our engagement with the installation. The many voices emerging from a plethora of fabrics and scenes sing out as a unified harmony. Works such as Nail Salon #1 present a space for women, run by women, with details and traces of those who populate it literally sewn into the fabric of the space. Form, material and pictorial content are unified in Hangama’s Bazaar: not a reproduction, nor an empty shell, but rather a translocated home: a memory recalled, reconstituted and given.”